Accessibility links
Total Solar Eclipse Will Pass Over South Pacific, South America The path of totality cuts across much of the south Pacific Ocean as well as Argentina and Chile — including a telescope that is one the world's largest.

Get A Glimpse: Total Solar Eclipse Will Pass Over South Pacific, South America

Get A Glimpse: Total Solar Eclipse Will Pass Over South Pacific, South America 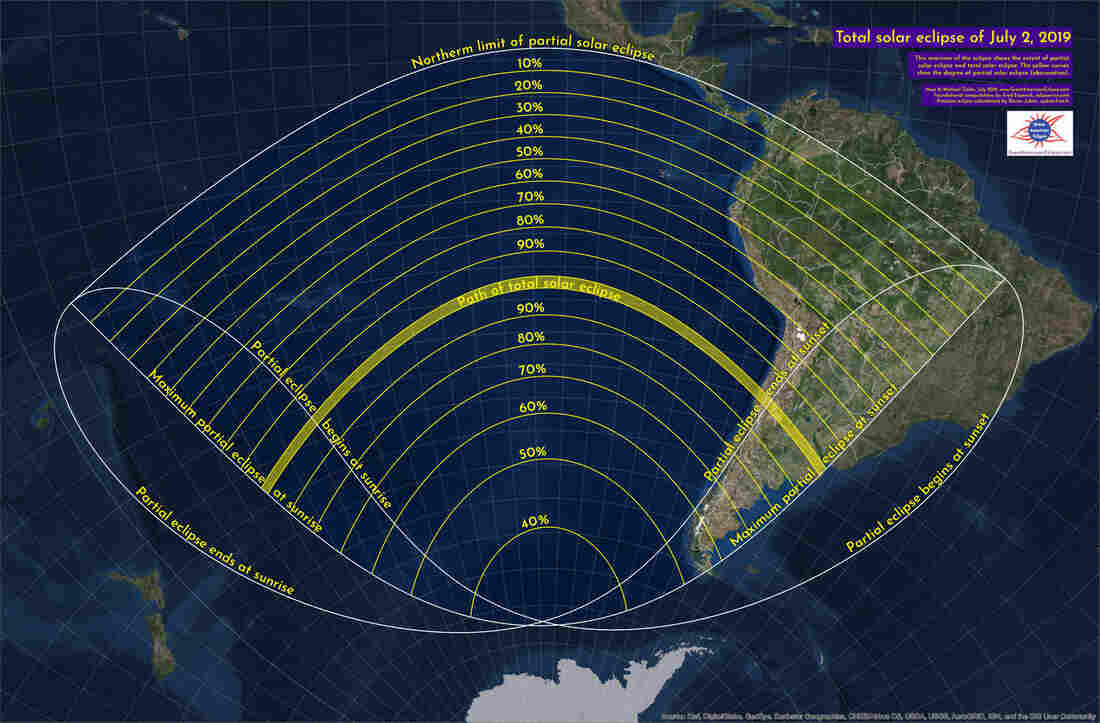 This graphic shows the path of Tuesday's solar eclipse and how much you can see from different places. The yellow band represents the path of totality, or the areas in which a total eclipse will be visible. Other areas will be able to see a partial solar eclipse. Michael Zeiler, greatamericaneclipse.com hide caption 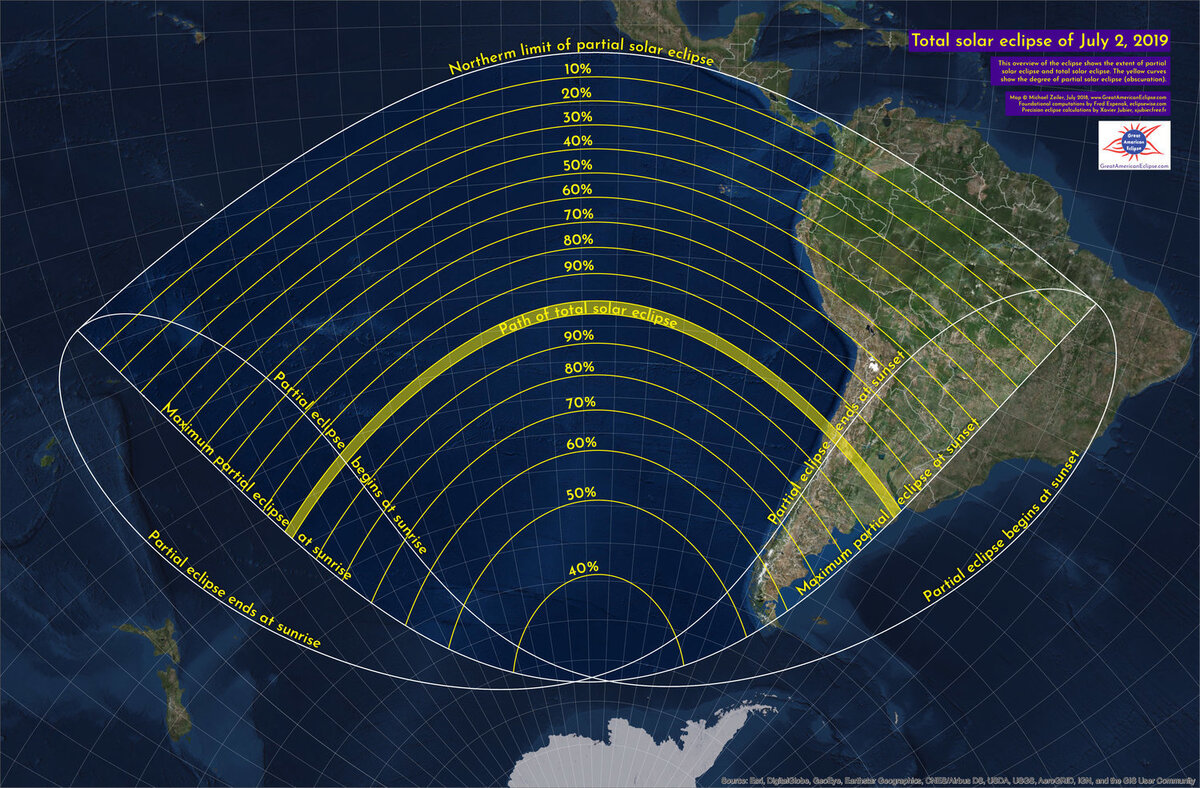 This graphic shows the path of Tuesday's solar eclipse and how much you can see from different places. The yellow band represents the path of totality, or the areas in which a total eclipse will be visible. Other areas will be able to see a partial solar eclipse.

Billions of fish in the Pacific Ocean will be treated to an awe-inspiring celestial event today. That's because a total solar eclipse will be visible over a huge swath of the southern Pacific.

Land animals including humans in Chile and Argentina will also get to observe the total spectacle, as will anybody connected to the Internet. And most parts of South America will be able to see a partial eclipse.

Much like eclipse fever hit the United States in 2017, people here in Chile are excited to see the eclipse. There's been nonstop media coverage, and places in the path of totality are expecting a huge influx of visitors.

For a little more than two minutes, people in what's known as the path of totality will have the stunning experience of the sun's light being completely obscured by the moon. (In an amazing cosmic coincidence, even though the moon is 400 times smaller than the sun, it's also 400 times closer — so from Earth they appear to be the same size.)

Although it is winter in the southern hemisphere, and snowfall is not uncommon at the observatory site, the forecast for today is for clear skies.

Stars will be visible, and so will the sun's wispy outer atmosphere called the solar corona, a layer of extremely hot gases extending out thousands of miles from the sun's surface.

Teams of astronomers have gathered at the National Science Foundation's Cerro Tololo Inter-American Observatory located near La Serena, Chile, to make measurements of the corona, something that for now is only possible during a total eclipse. The eclipse will pass directly over the observatory.

It's an ideal viewing location. At 7,200 feet above sea level, the observatory is above the marine layer that sometimes blankets the nearby Pacific coastline. It also provides infrastructure for the scientists who have carried their equipment to the summit.

There are still many questions to be answered about the corona: Why is it hotter than the surface of the sun? What factors make it expand and contract? How does it change over time? None of those questions will be definitively answered by today's observations, but the new data will help make the picture clearer.

Someday soon, it might not be necessary for astronomers to wait for a total solar eclipse to measure the solar corona. The Daniel K. Inouye Solar Telescope, currently being commissioned in Hawaii, will be able to simulate the conditions of an eclipse.

Eclipses have also been important to physicists. In 1919, an astronomer named Arthur Stanley Eddington set out to test Albert Einstein's theory of general relativity. One of the predictions was that the sun's gravity could bend light from a star more than traditional theories of gravity predicted. Eddington helped organize two expeditions — to Sobral in Brazil and to the island of Príncipe off the coast of West Africa — to watch the total solar eclipse on May 29, 1919. Their measurements confirmed Einstein's theory was correct.

A team of astronomers from National Optical Astronomy Observatory in Arizona and students from the University of La Serena in Chile will attempt to repeat Eddington's observations.

By the way, there won't be solar eclipses in perpetuity. The moon's orbit is taking it slightly farther from the Earth each year. Very slightly. But in 600 million years, it will be appear too small to completely cover the sun.

Procrastinators, you are warned.