Accessibility links
Disney Heir Abigail Disney Calls For Tax On The Wealthy Abigail Disney is among the superrich speaking out against income inequality. When Disney workers told her they were rationing insulin and sleeping in cars, she says, she felt an indescribable rage. 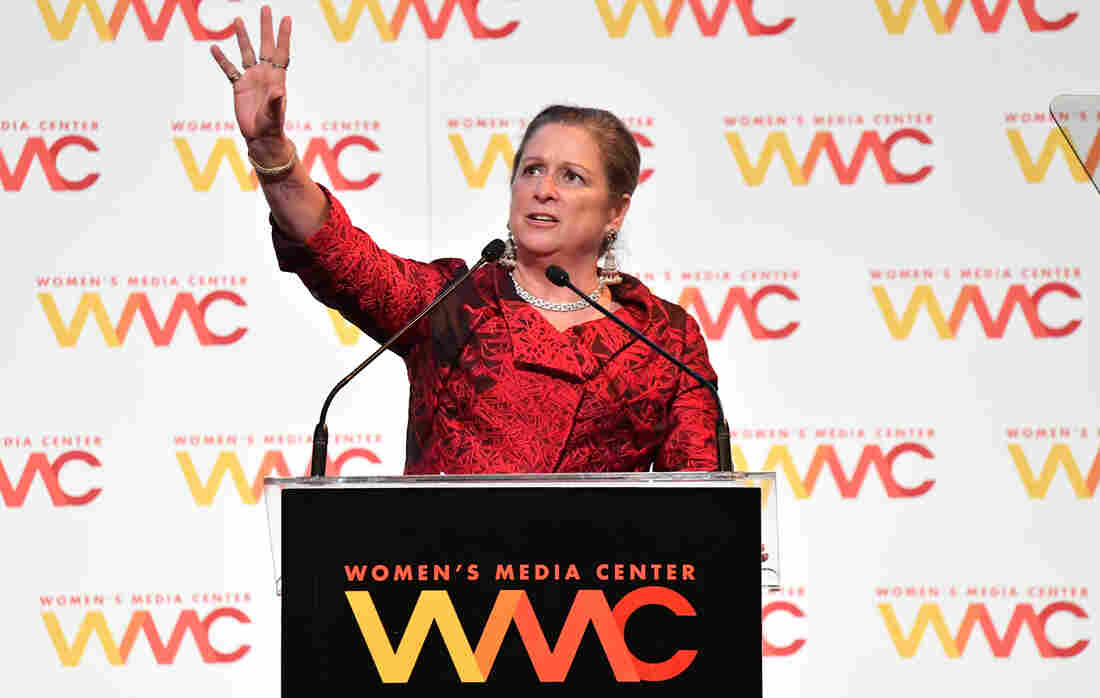 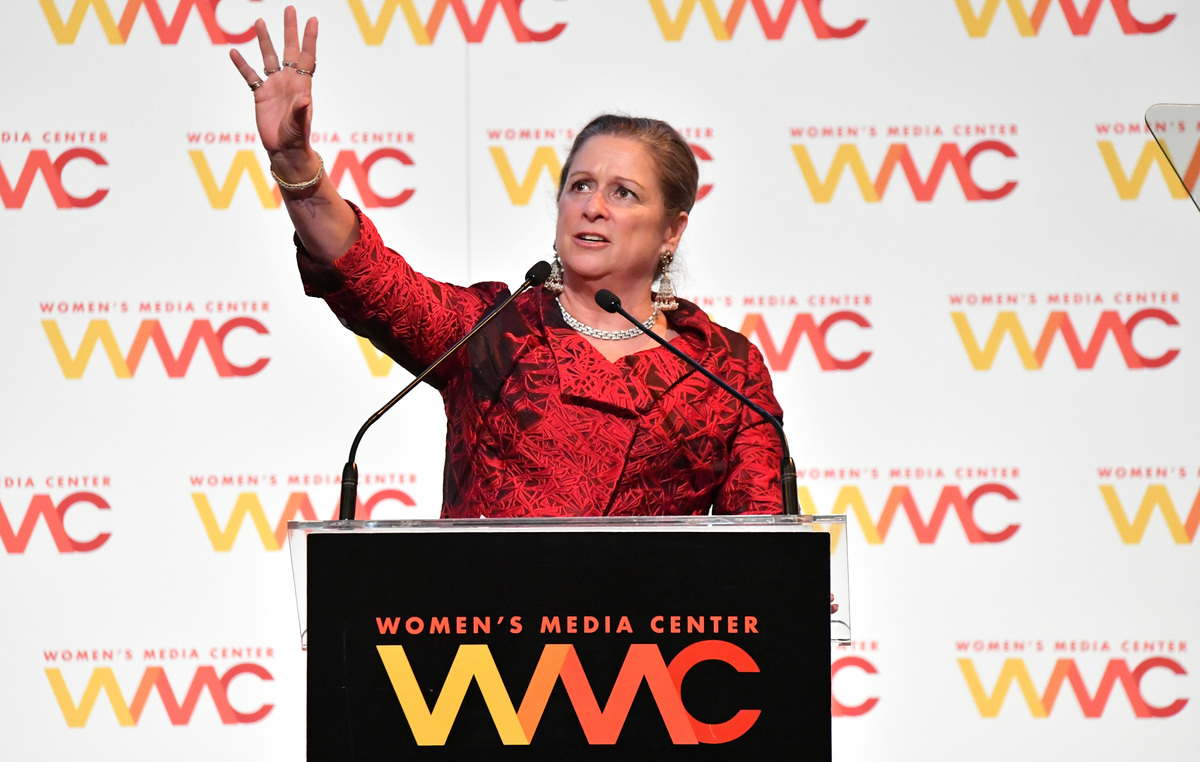 It may come as no surprise that a strong majority of Americans support a wealth tax — a higher tax rate for a small number of millionaires and billionaires.

But what might be a surprise is that some of those millionaires and billionaires are calling for a wealth tax themselves.

Abigail Disney is one of those people.

Her grandfather was Roy Disney, co-founder of the multibillion-dollar entertainment conglomerate that bears her family name — though she currently has no formal role with the company.

The activist and filmmaker has been speaking out on the issue of income inequality, and specifically at Disney. She was one of 18 people in the top one-tenth of the wealthiest 1% who first signed a recent letter to the 2020 presidential candidates supporting a tax for households with $50 million or more in assets.

"Nothing in history ever moved forward just because people advocated for their own interests," Disney tells All Things Considered. "Things really change when people are traitors to their class, and my class needs some really good traitors these days."

On why she signed the letter

On why she prefers a wealth tax over philanthropic spending

Here's the world I want to live in: I want to live in a world that doesn't need philanthropy. And if [Amazon CEO] Jeff Bezos earned less and paid his people more, and didn't have $37 billion to put into a philanthropy and figure out what to do with [it], there really wouldn't be that much philanthropy that was needed. I would rather not to be needed as a philanthropist, and I will never stop feeding the hungry and housing the homeless and all the other things that I want to do.

But I would so much prefer that public schools function, that roads don't break your axle, that people have health care — which they have a right to have — that low-income people who work full time at minimum wage don't need food stamps to get through their days. That's the world I want to live in.

On the crux of why she's speaking out against Disney

I know that company pretty well. ... When you're in what is setting up to be the largest media and entertainment conglomerate on the planet in the history of the world ... and when you have record profits, when your stocks are at record highs, and you're going home with obscene amounts of money — and I have no objection to obscene amounts of money in and of themselves — my objection is you have $15-an-hour workers who cannot buy enough food to eat. They are rationing their insulin; they are sleeping in their cars.

How do you jibe one thing with the other? When you're running such an enormous conglomerate, can you not break from orthodoxy? What if you made less money and everybody else made some more? You don't have to create a foundation to go feed those hungry people because you've paid them fairly. ...

I have literally sat in a room with the people [at Disney] who pour your soda, and the people who clean your room and scrape gum off the sidewalks, who have told me, "I have to ration my insulin." I have sat with them, and I have felt a kind of rage that I don't even know how to describe to you.

It's a different kind of brand. This is a brand people feel actual love for. I use the word love very mindfully here. Love. And when somebody loves something, they expect more of it than just the minimum allowable legal thing.

And so when you say to somebody about the Disney brand, the people pouring your soda cannot afford their insulin, and the man in charge of them is coming home with a nine-figure paycheck, they do feel an outrage that is very visceral. And I think that given that there are so few companies that can be shamed anymore, this is a really important place to start a bigger, broader conversation about all of these companies.

The thing is, [Disney Chairman and CEO] Bob Iger is kind of a nice guy ... and everybody around him are nice people. What has become thought of as normal — and the kind of thing nice people do — isn't nice, and somebody has to say the emperor's wearing no clothes. Somebody just has to say it. ...

I've traveled everywhere in the world, and everywhere you go, you find a hand-drawn painting of Mickey Mouse on the side of a children's school. ... He has jumped out of the celluloid, and he exists, and he is a citizen of the world, and everybody understands what he means and what he's for. This is not true of any other brand that I can think of.

And so we have a special responsibility and that's why I feel the weight of this. When I went last year and met with the workers at Disneyland, I could not shed the weight I was carrying once I went home from there, I couldn't say nothing.

I'm turning against the empire itself. It's like the empire went off in its own direction. It's almost unrecognizable to me now. And we have no family engagement on the company anymore. There's nobody from the family on the board. It's still my name. I still use my credit card and I still feel all that comes with that and the expectations, and people still say to me, "You must have had such a happy childhood"; "Oh, how wonderful the gifts your grandfather and uncle gave to the world." Those are very lovely feelings.

And if I am welcoming to those kinds of perceptions, I also have an obligation to attend to the rest of the ways in which it's not engaging with the world in a good way, and it's actively promoting something that's really deleterious — not just to the low-income people; they're destroying the middle class and they're having a go at democracy itself.

The Walt Disney Co. has responded to Abigail Disney's criticisms. In a statement to NPR, the company says:

"Disney is at the forefront of providing workforce education, which is widely recognized as the best way to create economic opportunity for employees and empower upward mobility. Our Disney Aspire initiative is the most comprehensive employee education program in the country, covering 100% of all tuition costs, books and fees so our hourly workers can pursue higher education free of charge, and graduate free of debt. Under Bob Iger's leadership, Disney has made an initial commitment of $150 million to fund this program in the first five years, and will continue to make significant investments to make Disney Aspire available to as many employees as possible. Disney also provides flexible schedules and subsidized childcare to make it easier for employees to take advantage of this opportunity. American workers need meaningful change; they deserve smart policies and practical programs, like Disney Aspire, that empower them to achieve their goals and ensure they are part of the most competitive workforce in the world."