Accessibility links
Venezuela's Teachers And Students Skip School For Survival Amid Venezuela's catastrophic economic meltdown, education experts say that it's getting much harder for children to get a good grasp of history, geography and their ABCs. 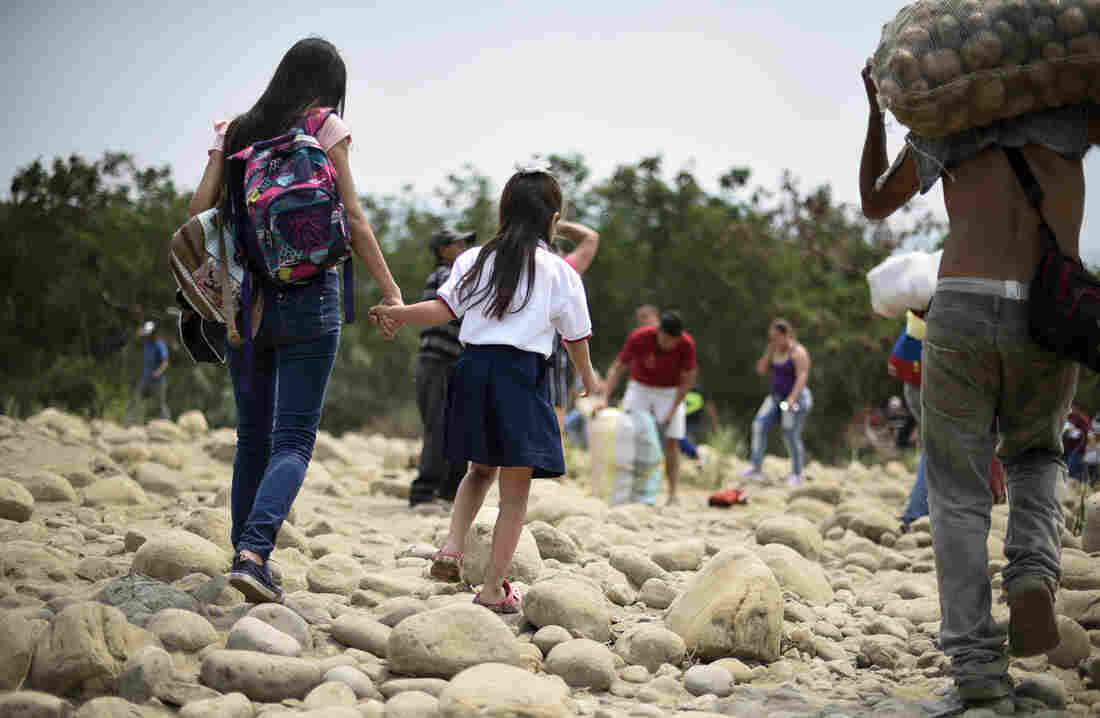 Venezuelan Leidy Navarro (left) walks with her daughter Valentina Caceres back to their home in Ureña, Venezuela, after picking her up at school in Cúcuta, Colombia, in March. Juan Pablo Bayona/AFP/Getty Images hide caption 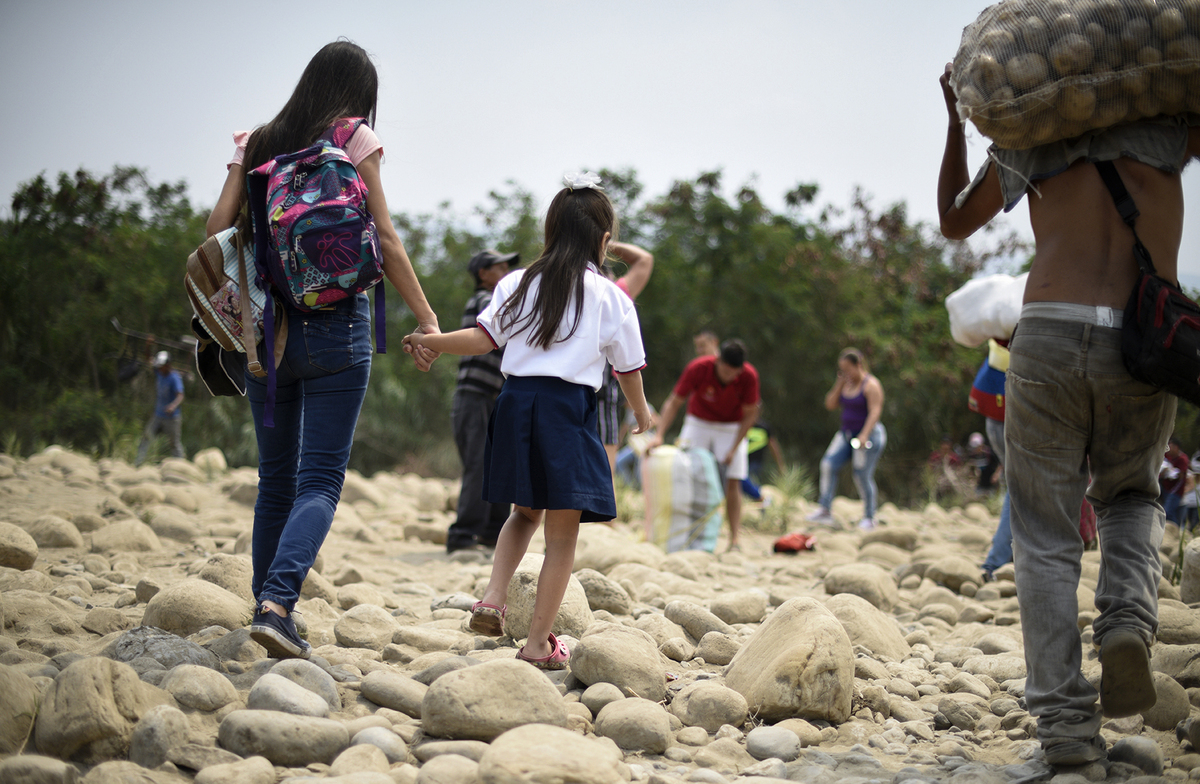 Venezuelan Leidy Navarro (left) walks with her daughter Valentina Caceres back to their home in Ureña, Venezuela, after picking her up at school in Cúcuta, Colombia, in March.

At a primary school in a middle-class neighborhood of Caracas, Venezuela, the students' parents play an outsize role.

Gasoline shortages have collapsed public transportation, making it hard for teachers to get to work. Others skip class to scrounge for food and medicine, both of which are in short supply in Venezuela. Due to low salaries, some teachers have quit.

That's why Karen Benini, the mother of a sixth-grader, often steps in to substitute even though she lacks a teacher's certificate.

"I'm not a teacher. I never studied to be a teacher. I'm a graphic designer," says Benini, 41, who volunteers two to three days per week.

Amid Venezuela's catastrophic economic meltdown, education experts say that it's getting much harder for children to get a good grasp of history, geography and their ABCs.

School staff are resigning in droves. Legions of students and teachers are among the 4 million Venezuelans who have fled the country in recent years. Those still going to school in the country often find that classes have been canceled due to power outages, water shortages and other breakdowns.

Some school buildings are falling apart, have been taken over by homeless squatters or are used by pro-government militias for training, says Nancy Hernández, a founder and board member of FENASOPADRES, a national association of PTAs.

In 2016, the last year the Venezuelan government released enrollment figures, about 8.5 million Venezuelan children were attending K-12 schools. Now, that figure may have dropped to about 6.5 million, according to rough estimates provided by Hernández.

One independent education group in Aragua state, just west of Caracas, reported that at the start of the current school year more than half of all students were no longer going to classes.

In a TV interview in May, Education Minister Aristóbulo Istúriz acknowledged problems but blamed them on U.S. economic sanctions and pointed out that, in spite of the government's challenges, public school remains free.

To make up for lost class time, Istúriz announced that the 2018-19 academic year, which normally ends in June, would be extended through July.

But Hernández, who is also a former national elections official, says that will make little difference.

"We, as an organization, have determined that the 2018-19 academic year has been lost," she says of the PTA group.

Many of the challenges faced by students and teachers are glaringly obvious in Ramo Verde, a mountainside slum on the outskirts of Caracas, where María Pérez has taught geography at a public school for the past 18 years. She's one of just four teachers still showing up for work. The other eight recently resigned because they couldn't survive on their $5 monthly salaries.

Pérez scrapes by peddling cellphone accessories on weekends. She also crosses the border into Colombia to stock up on food, which she resells on the streets and sometimes distributes to her malnourished students. 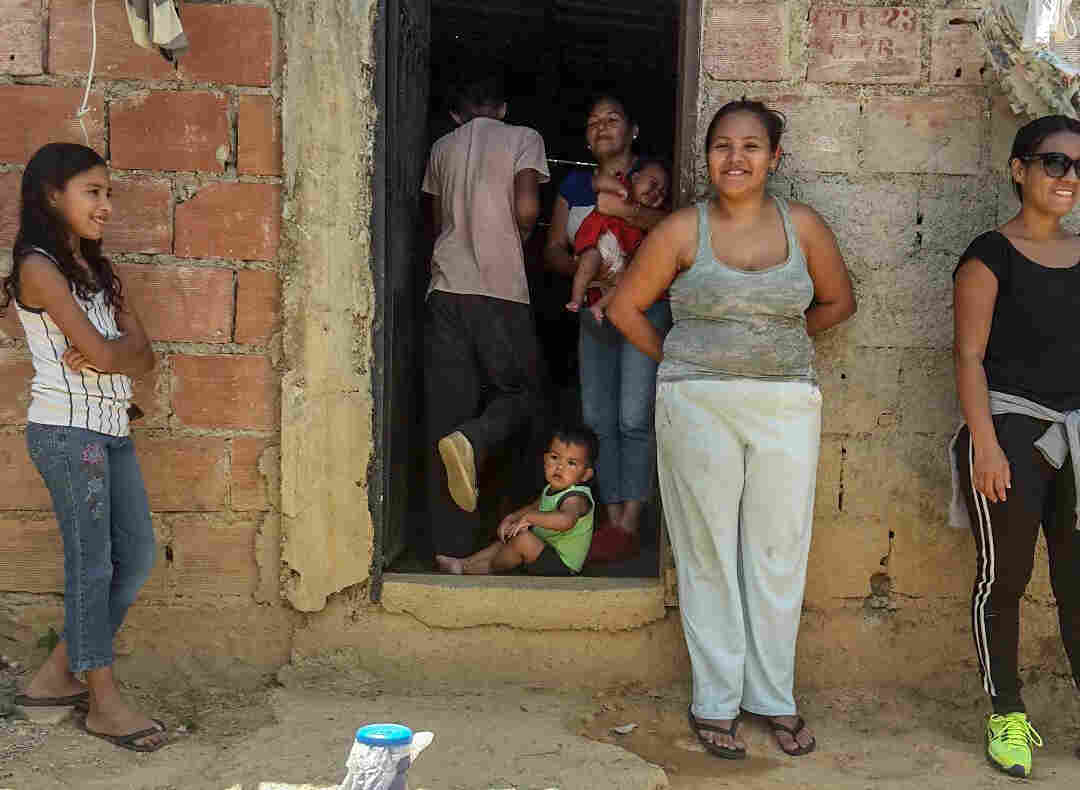 Raquel Castaño stands to the right of the entrance to her home in Ramo Verde, a poor neighborhood on the outskirts of Caracas, Venezuela, is a mother of five. She says her 15-year-old son often skips school to work delivering water to the community. John Otis for NPR hide caption 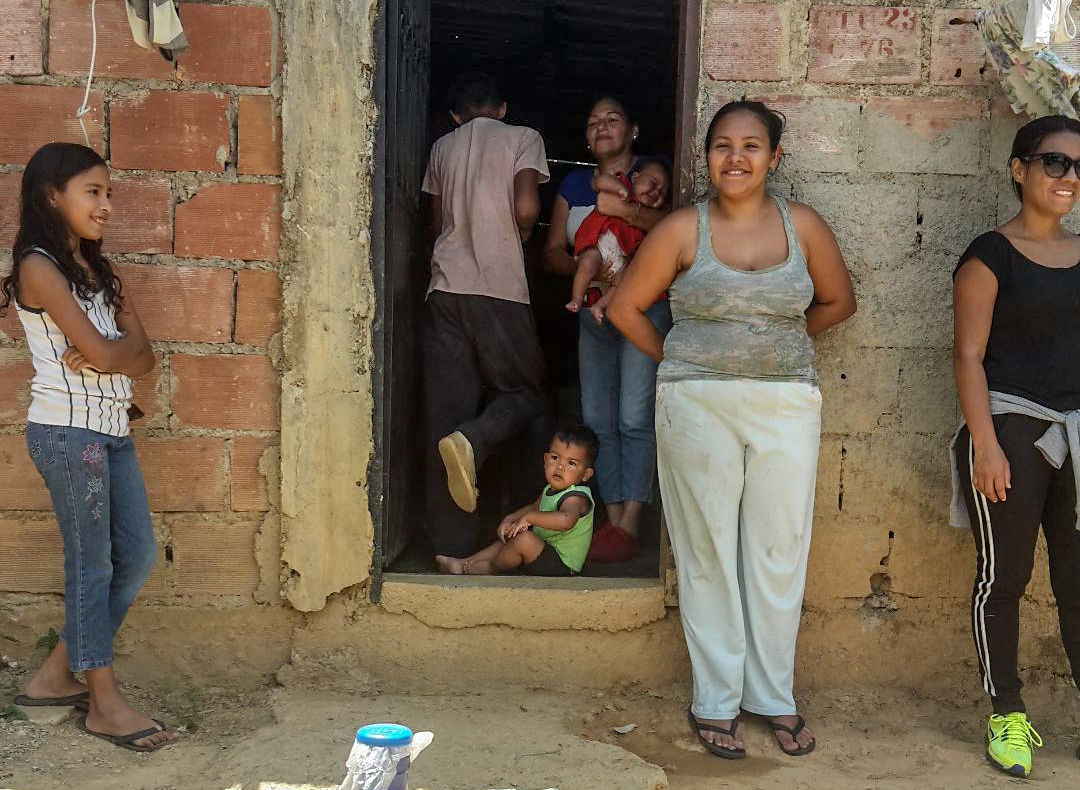 Raquel Castaño stands to the right of the entrance to her home in Ramo Verde, a poor neighborhood on the outskirts of Caracas, Venezuela, is a mother of five. She says her 15-year-old son often skips school to work delivering water to the community.

The school is supposed to provide a midday snack but often there are no provisions in the cafeteria. Three of her students recently fainted, including one girl who had not eaten dinner the night before or breakfast that morning and collapsed during gym class.

"It makes me want to cry," Pérez says.

Many of her students skip school to help feed their families by doing odd jobs — such as hauling water.

During frequent electricity cuts in Ramo Verde, water pumps don't work. So residents must fill up buckets and containers at mountainside springs and lug them back to their homes. Some of Pérez's students now spend their days going door to door delivering spring water.

As she walks through the slum, Pérez spots one of them, Roynel Riso, a skinny 14-year-old. In exchange for about 5 gallons of water, families will pay Riso with a bag of rice or pasta. He prefers payment in kind because hyperinflation has rendered the bolívar, Venezuela's currency, nearly worthless.

Riso skips two days of school per week and laments: "I miss going to math class."

Yureibis Coronado, a mother of three who lives in a three-room shack in Ramo Verde, says shortages of water and soap promote absenteeism because many parents refuse to send their children to school in dirty uniforms.

"It's very worrisome," she says, "because kids go to school today so they can be somebody tomorrow."

Despite professing loyalty to her students, Pérez is thinking of joining the exodus of Venezuelan educators.

This summer she plans to visit friends in the United States who have set her up with part-time work. She'll still be teaching — but this time as a spinning instructor at a gym in North Carolina.