Accessibility links
Fireworks Are Dangerous For Birds. Here's How To Enjoy Responsibly. When fireworks go off in the vicinity of birds, the results can be fatal. Stick to commercial shows, experts say. 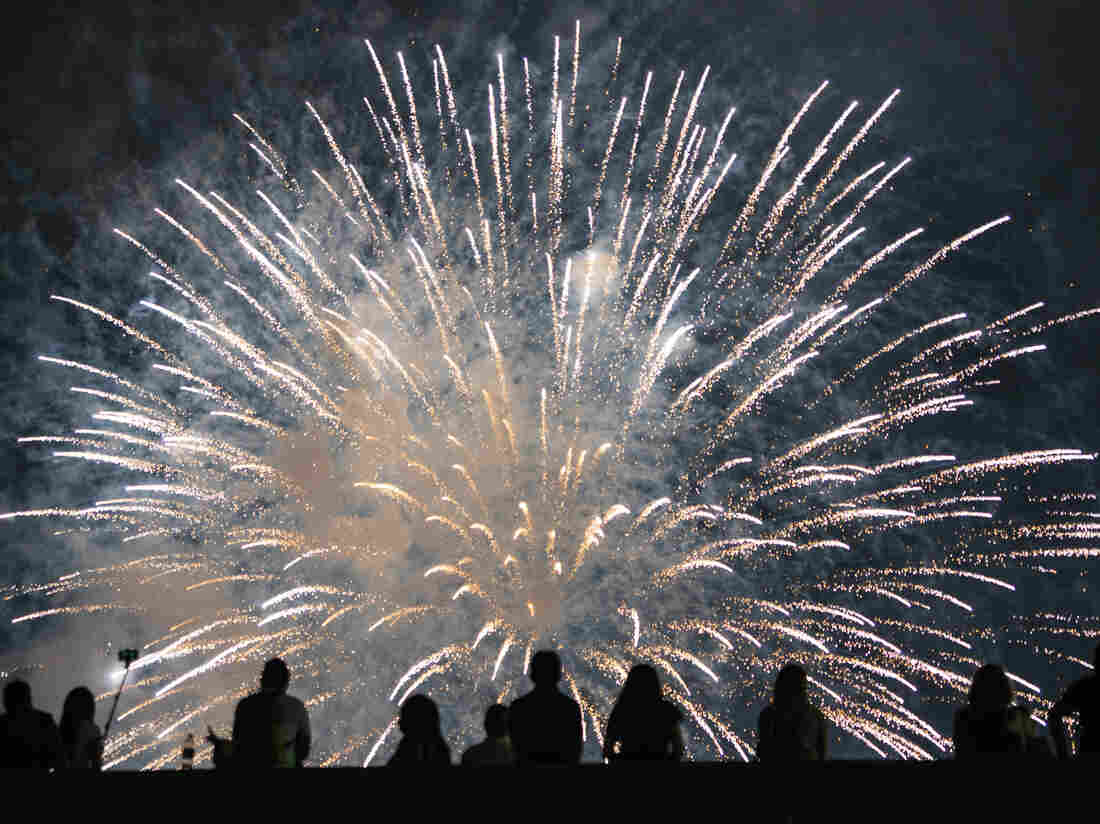 Even birds who are accustomed to urban noises can be spooked by the boom of fireworks, take off and crash into trees, cars and buildings. Craig Ruttle/AP hide caption 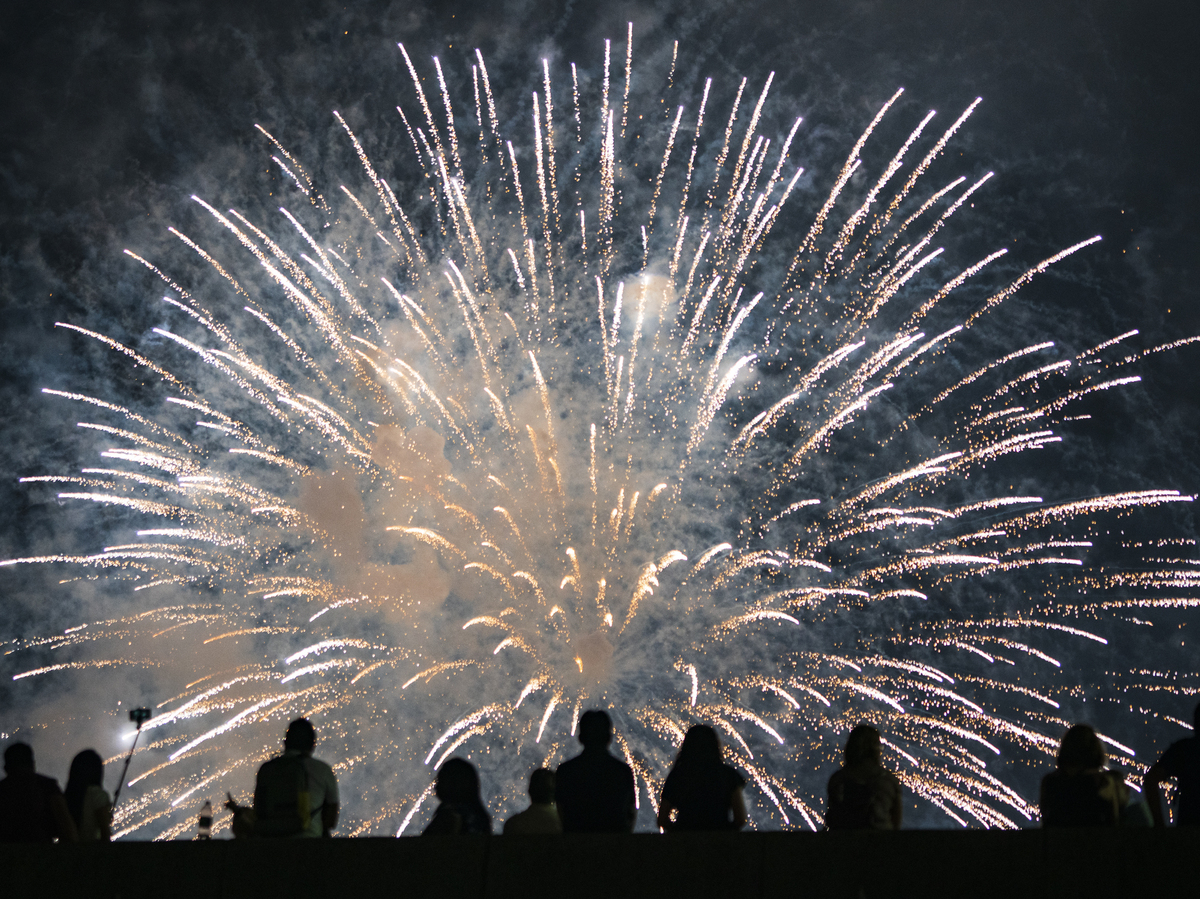 Even birds who are accustomed to urban noises can be spooked by the boom of fireworks, take off and crash into trees, cars and buildings.

It was like a scene straight out of Alfred Hitchcock. Late on New Year's Eve 2010, thousands of birds rained from the sky in Beebe, Arkansas.

Some 5,000 red-winged blackbirds, European starlings, common grackles and brown-headed cowbirds suffered blunt-force trauma after colliding with cars, trees and buildings, an ornithologist from the Arkansas Game and Fish Commission would tell National Geographic.

Why does it matter now? The answer is fireworks. Specifically, the noises that accompany fireworks and pose a threat to birds, according to Ray Brown, host of the Talkin' Birds podcast.

When birds hear the loud boom, they panic and take off, says Brown. "And its nighttime, so they can't really see where they're going. So crashes result."

And just as experts suspect happened in Arkansas, "When you've got a big roost of birds that take off together, the mayhem multiplies," Brown says.

With Fourth of July celebrations approaching, Brown offers this reminder: Birds are just as frightened of fireworks as cats and dogs are. When fireworks explode in the vicinity of a roost, or even around individual birds, the results can be fatal.

"Birds are spooked by any kind of loud noise," he says. "But fireworks, of course, are in the air and are especially loud, so I think that's something birds are not really used to coping with. And these things go on for several minutes."

There have been no mass-scale bird deaths reported as a result of fireworks since the Arkansas event, but in recent years, localities across the world have still documented harm to birds from loud pyrotechnics and taken steps to reduce the impact.

In 2008, for example, federal officials showed that seabirds in the northern California town of Gualala abandoned their nests after a fireworks show, leaving their eggs vulnerable to predators, SF Gate reports. The California Coastal Commission halted the town's planned fireworks display in response.

And just last year, the Galapagos banned the sale and use of pyrotechnics. According to the BBC, conservationists said that fireworks caused elevated heart rates, trembling and anxiety in animals. The ban makes an exception for fireworks without noise.

"Other places are using laser shows" with live music or virtual shows where laser images of fireworks are projected onto tall buildings, Brown says. In the English port town of Bideford, the district voted to ban fireworks in the vicinity of a bridge where starlings roost, and the city council proposed a laser show instead. Banff, a resort town in Canada, switched to quiet fireworks last year to protect wildlife — as did the Italian town of Collecchio in 2015.

But there are more risks than just noise. Viewers watching fireworks from the beach, for example, can trample birds that are still nesting in the summer. And used firework shells, now often made out of plastic rather than the traditional bamboo, contribute to high volume of plastic debris on land and in the ocean that threatens birds. A 2015 study published in the journal PNAS estimated that 90 percent of seabirds have likely ingested plastics, though Brown says the issue can also affect other birds as well.

"And of course when they're eating this plastic, eventually these chicks will starve to death from not having any nutrition," Brown says.

So what do you do if you want to watch fireworks responsibly? Brown says municipalities are more likely to be aware of these dangers than private consumers. His best advice is to stick to the shows put on by professionals and local governments, which tend to follow guidelines put forth by the U.S. Fish and Wildlife Service, among others, about animal safety.

The National Audubon Society offers similar guidelines: "Commercial fireworks are concentrated in one location, rather than in several locations at once, which is what often happens in neighborhoods. This allows birds to take off and land again in a 'safer' location rather than continuing to flee noises coming at them from all directions."

Francesca Paris and Ed McNulty produced and edited this interview for broadcast.