Accessibility links
In 'The Weather Machine,' A Look At How The Forecast Got Good Under the radar (so to speak), predictions have improved dramatically of late. In The Weather Machine, Andrew Blum writes that it's due to an international (and imperiled) alliance of supercomputers. 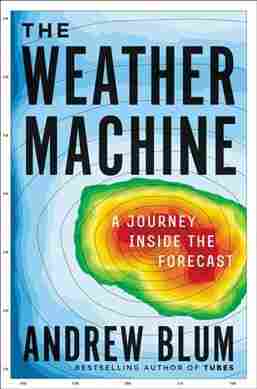 A Journey Inside the Forecast

Today, you can pull out your phone and know the weather a week in advance.

That's pretty neat. And it's all because weather forecasting — specifically, the supercomputer-driven modelling which crunches huge amounts of data and predicts future outcomes — has gotten really good. A six-day weather forecast today is as good as a two-day forecast was in the 1970s.

Andrew Blum wanted to know how those forecasts got made, and his curiosity led him to research and write The Weather Machine: A Journey Inside the Forecast. He says he first got the idea for the book when he saw a forecast for Hurricane Sandy eight days in advance of its arrival.

"That length of that time just seemed astonishing to me," Blum says. "And it also seemed crazy to me that it wasn't the expert hurricane forecasters, you know, sort of putting the pieces together in their minds — it was really the outputs of these computer models that they are responding to."

In an interview, he explains the international network of forecasting systems — and the threat that privatization poses to that network.

On weather forecasting being both banal and extreme

Why Your Local Weather Forecast Is Going To Get Better

The funny thing about the topic of the weather is there's both incredibly banal moments — you know, getting caught in the rain, the canceling picnics — and then the swings to these incredible extremes, you know, with millions of people displaced, with billions of dollars of damage. And the weather models in the forecast have to serve both. And it's remarkable to me as well that one of the things that's happened as the scale in the system has shifted to the computers is that it's no longer bound by past experience. It's no longer, the meteorologists say, "Well, this happened in the past, we can expect it to happen again." We're more ready for these new extremes because we're not held down by past expectations.

On how the systems work

The first thing is to know what the weather is, so you can know what the weather will be. That's the crux of it. So you need as complete observations of the global atmosphere as possible, which means coming from satellites and weather buoys and from sensors on airliners. And then once you know what it is, what you can do is then begin to run it forward in time. But rather than just being plugged into the supercomputers — you know, in comes the present and out comes the future — the models are really a kind of ongoing concern. ... They run ahead in time, and then every six hours or every 12 hours, they compare their own forecast with the latest observations. And so the models in reality are ... sort of dancing together, where the model makes a forecast and it's corrected slightly by the observations that are coming in.

On who "owns" the system

It's definitely run by individual nations — but individual nations with their systems tied together — and that happens both geographically but also temporally. ... European polar orbiters cover the earth in each local time's morning and the American orbiters come in the afternoon. And that's the pattern that was established decades ago, but has been essential to making sure that we have the latest observations from every part of the Earth's atmosphere. It's about this continually humming system to step forward in time, and correct slightly, and keep spitting out a changing forecast that hopefully gets better and better.

On the "major threat" of privatization to weather forecasting 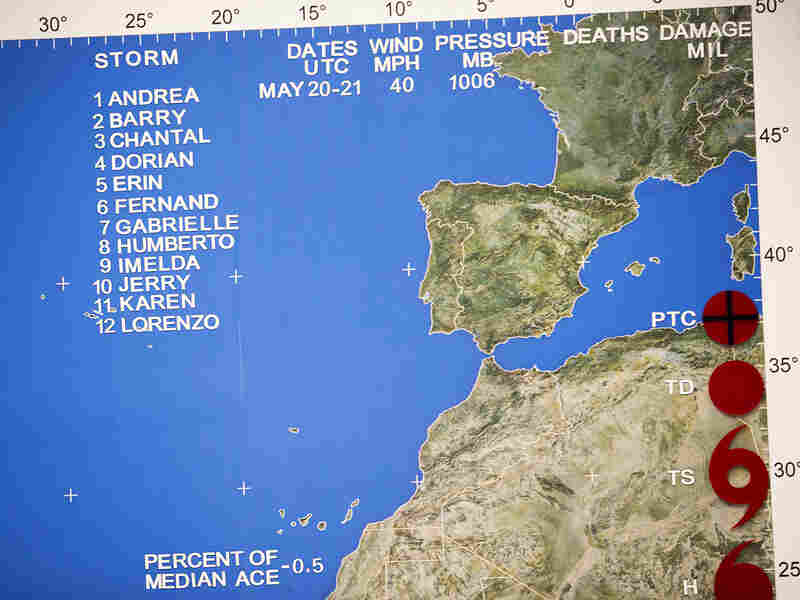 The list of names for the 2019 Atlantic hurricane season are seen on a map at the National Hurricane Center in Miami, Florida. Joe Raedle/Getty Images hide caption 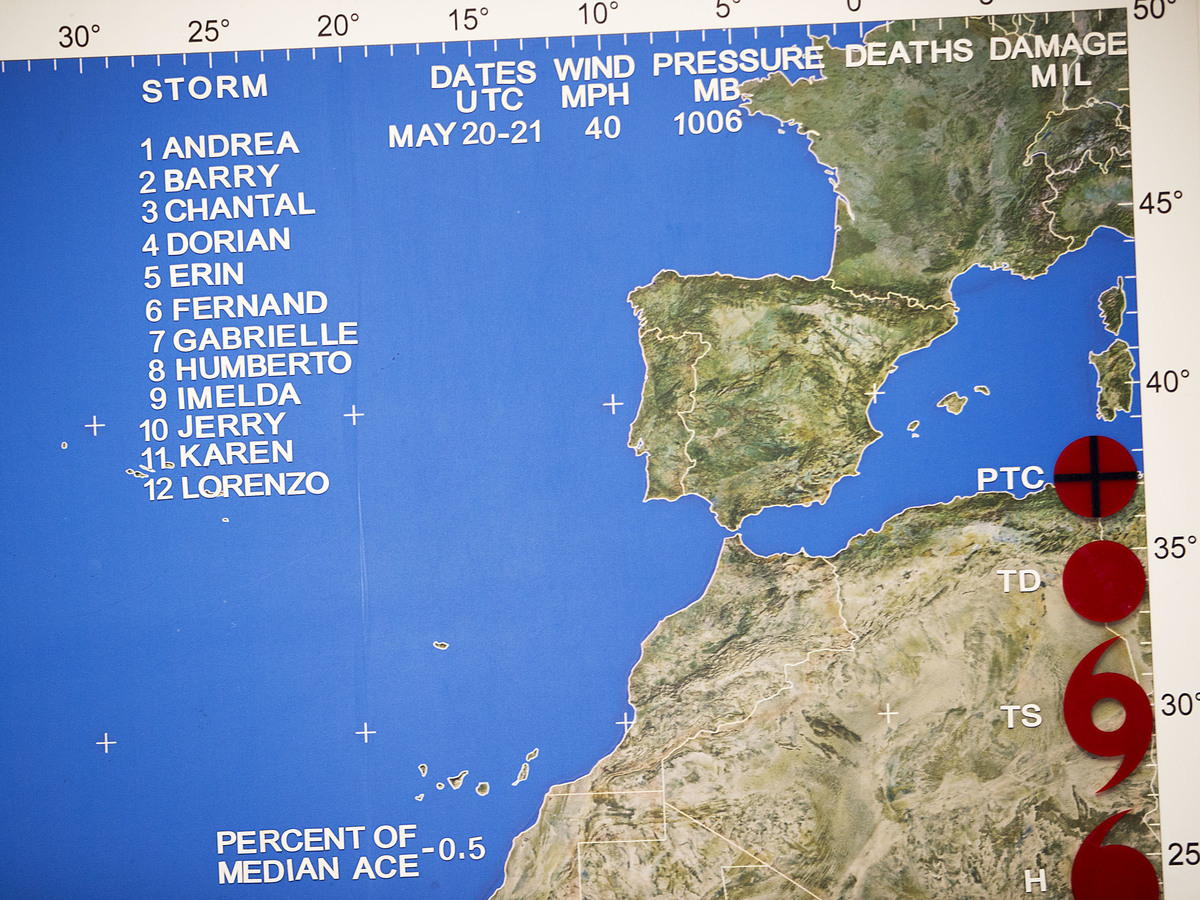 The list of names for the 2019 Atlantic hurricane season are seen on a map at the National Hurricane Center in Miami, Florida.

It's a 150-year-old system of governments collaborating with each other as a global public good. You know, in the '60s it was something that President Kennedy saw as a real point of cooperation. It was a counterpoint to the space race. Meteorology was a way that governments could collaborate. But more recently, the stakes have gotten higher financially. Climate change has created an opportunity with more extreme events — better technology has sort of made it possible for companies to ... sell better forecasts in a way that we potentially have a kind of bifurcation. We potentially have forecasts for the haves, and forecasts for the have-nots. It hasn't come yet, but you can sort of see everybody gathering around, recognizing that while before this was too expensive for anyone but governments to do — no private company was going to spend, you know, $20, $30 million dollars on a supercomputer — when you look at the amount of money at stake with different weather extremes, now that equation has changed. And there is the potential for profit, and companies are working hard to capture it.

The positive example from last month was with Cyclone Fani in India. And this was a very similar storm to one 20 years ago, that tens of thousands of people had died. This time around, the forecast came far enough in advance and with enough confidence that the Indian government was able to move a million people out of the way. So there was a global forecast that had ... an immediate impact in a part of the world that does not have the most sophisticated weather service.

The alternative would be, you know, if you had a hurricane coming down in Florida, for example, and you had ... private forecasting services that said: We can predict this with an extra day ahead of time, allowing for people to evacuate who have access to that information. And that information becomes a commodity rather than a public good.

On what keeps him up at night

What keeps me up is the idea of a perfectly forecast storm that is catastrophic on a broader scale and that we see coming for six days ahead and need to make decisions — not just as individuals, but as a society or as a city ... how to move and respond. ... That anticipation is new. You know, we haven't had that capability before, and we have it now, and the next step is to figure out how to use it properly.

Francesca Paris and Barrie Hardymon produced and edited this interview for broadcast. Beth Novey and Patrick Jarenwattananon adapted it for the Web.