Accessibility links
Experts Debate: Will Trump And Kim Meeting Be 'Historic' Or Just A Photo Op? Whether the symbolism of President Trump stepping into North Korea carries with it the promise of change, or little more than dramatic optics, remains the subject of debate. 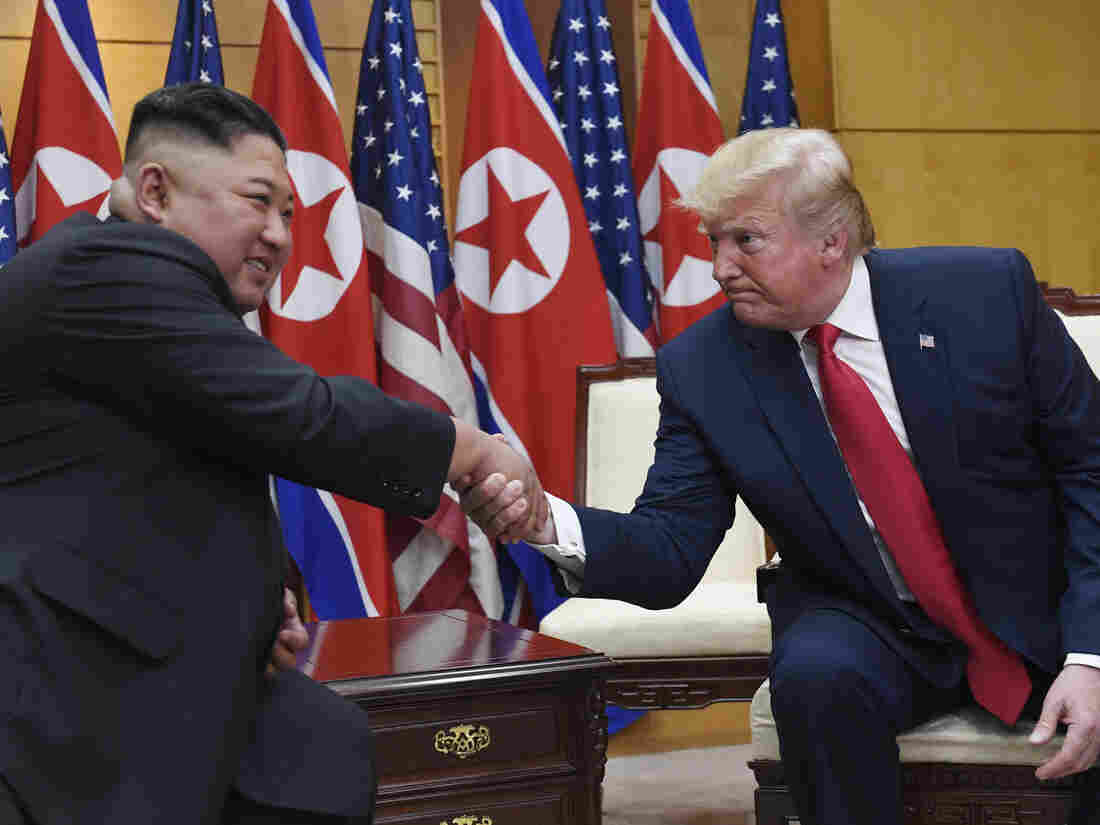 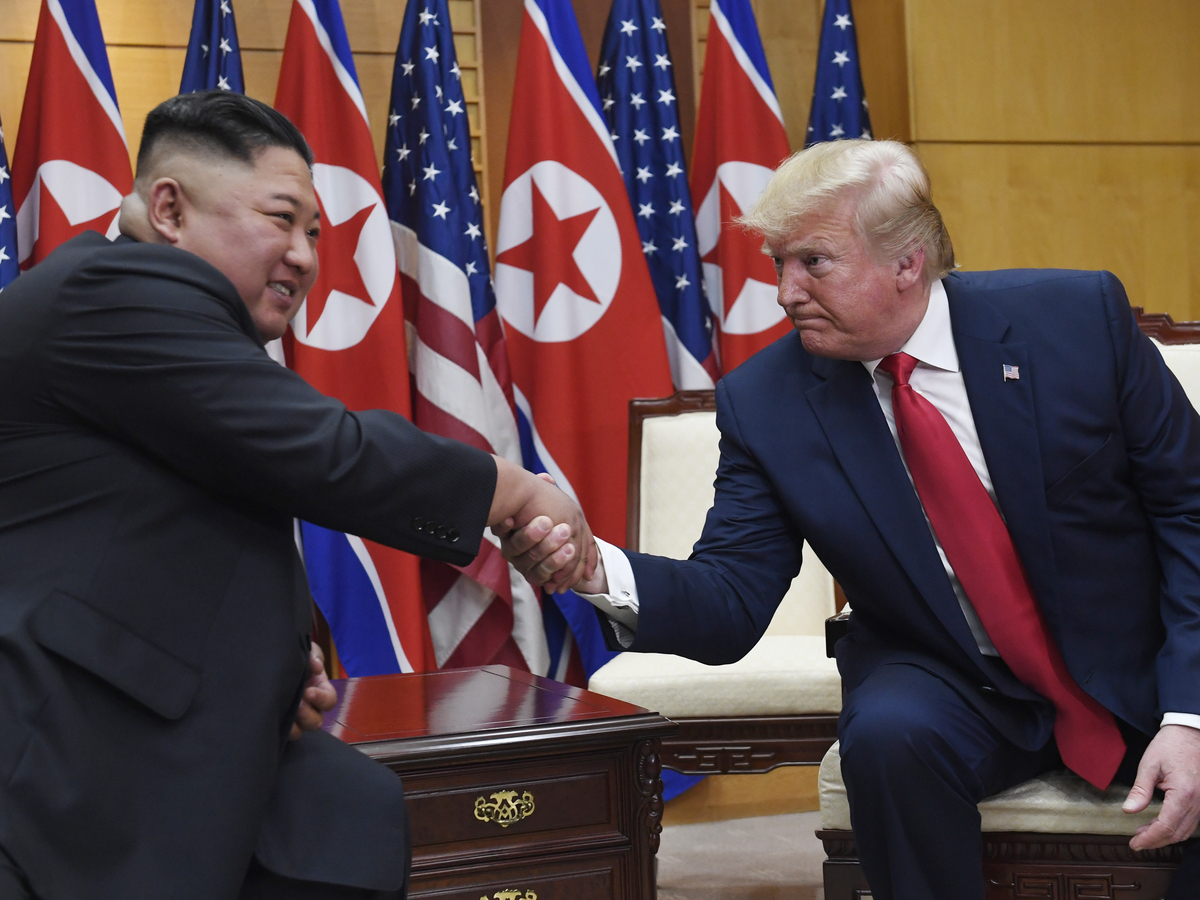 It is too soon to tell whether the much-hyped meeting between President Trump and North Korea's Kim Jong Un on Sunday will be remembered as a televised spectacle or the start of a breakthrough in talks with the nuclear-armed country.

But Trump did become the first sitting American president to venture into North Korea.

"I was proud to step over the line," Trump told Kim about crossing the demarcation line at the Demilitarized Zone that separates the two Koreas. "It is a great day for the world."

The celebratory mood seemed a long way from the insults and bellicose rhetoric the two leaders have previously engaged in, a hostile dynamic that has cooled down over the course of what Trump has described as a burgeoning friendship between Trump and Kim.

Whether the symbolism of stepping into North Korea carries with it the promise of change, or little more than dramatic optics, remains the subject of debate among Korea experts and other observers.

"This is about looking good," said Wendy Sherman, who was the policy coordinator for North Korea during the Clinton administration, in an interview with NPR.

Sherman said the real question is what happened during the 50 minutes Trump and Kim had a closed-door chat.

"Is there a real negotiating track that has begun?" she asked. "Did the president give anything up in those 50 minutes? Is there any there there?"

To Sue Mi Terry, senior fellow for Korea at the Center for Strategic and International Studies, one detail of the meeting jumped out: Trump hinted that U.S. economic sanctions on North Korea could perhaps be lifted during negotiations, rather than at the conclusion of a deal to denuclearize, which was the administration's previous position. It signaled a possible a departure from the Trump administration's "maximum pressure" campaign against the country.

"President Trump is looking for a deal, and potentially, now that working-level negotiations are to resume, there is a deal to be had," Terry said.

In announcing that the U.S. will resume talks with the North, President Trump told reporters, "We're not looking for speed. We're looking to get it right."

Trump said economic sanctions on the country would remain in place, but he hinted that the administration could ease the pressure, saying that "during the negotiation things can happen."

Other experts said Trump is misguided in believing that a supposedly impromptu face-to-face with Kim would result in an arms control agreement, something decades of careful and calculated negotiations with senior U.S. policy leaders has not been able to achieve.

"It's only 'historic' if it leads to denuke negotiations, a verifiable agreement and a peace treaty," said Victor Cha, Georgetown University professor and senior adviser of the National Committee on North Korea. "Otherwise it's just some nice pics and pageantry."

Cha said he worried the meet-and-greet at the heavily fortified Demilitarized Zone, the president's third face-to-face meeting with Kim, legitimizes a regime that has been criticized for human rights violations against women, political dissenters and other at-risk groups.

Surrendering all their weapons is not a likely scenario, said Cha, who was the top Korea adviser in the George W. Bush administration.

Cha noted that when he helped reach a deal with the North, in 2005, when the country initially agreed to freeze some of its weapons programs, the plan collapsed when American officials attempted to verify its nuclear capacity.

"We can't really do full denuclearization until they admit to having certain things," he said. "Until that happens, a deal is not going to look credible."

Trump has viewed a truce with North Korea resulting in the surrendering of nuclear weapons as a key foreign policy goal, and his insistence on in-person gatherings with the authoritarian leader has been unorthodox. The president's Singapore meeting with Kim in June 2018 marked the first time a sitting American president met with the country's head of state since a cease-fire was signed in 1953 ending the Korean War.

Critics of Trump say his past career as a television star is fueling his prioritizing of high-profile meetings with world leaders, but with North Korea, they say, the tactic has not yielded much more than handshakes and wide grins.

Former Obama adviser Ben Rhodes said a meeting was never sought with Kim during the eight years of the Obama administration. "Foreign policy isn't reality television," he said. "It's reality."

Sherman said she supports the summits with Kim, seeing them as an unconventional path that could prove fruitful, though she said there appears to be some important missing pieces.

"You try something novel and different when you have a plan, a strategy, a team to follow through, you know what your next five moves are going to be," Sherman said.

For North Korea, Trump's meetings are providing a public relations boost to a country that has traditionally been isolated from the global stage, she said.

"They are a country that is a true dictatorship, cut off from most of the rest of the world," Sherman said. "They don't have enough arable land to feed their own people, so they go through times of real famine and malnutrition of their people. There are no human rights."

Terry said one beneficiary of the Sunday get-together between Trump and Kim is President Moon Jae-in of South Korea.

"The economy is not doing well in South Korea, and President Moon has staked his entire legitimacy, his legacy, on a deal with North Korea," Terry said. "South Koreans in general want engagement with North Korea."

Terry cautioned, however, that a victory should not be claimed just yet.

"Of course, we are still a very, very long way from a complete verifiable, irreversible denuclearization," she said.

In Washington on Sunday, praise and skepticism from lawmakers fell along partisan lines.

"President Trump just made history," wrote House Minority Leader Kevin McCarthy, R-Calif., who said even those who dislike Trump "are going to have to give him credit for resetting the stage and bringing North Korea to the table."

Biden's campaign put out a statement accusing Trump of "coddling" dictators "at the expense of American national security." Warren tweeted that Trump "shouldn't be squandering American influence on photo ops and exchanging love letters with a ruthless dictator," saying the president should instead be dealing with North Korea through "principled diplomacy."

Speaking on ABC News, Vermont Sen. Bernie Sanders was more muted, saying he has "no problem" with Trump's meeting with Kim, but said "we need to move forward diplomatically and not just have photo opportunities."