Accessibility links
GOP Hopes New Small-Donor Platform WinRed Catches Up With Democrats' ActBlue Republicans hope their new online fundraising platform will close the gap between the GOP and Democrats, even though the digital highway is littered with several previous failed attempts.

President Trump speaks at a rally in Orlando, Fla., in June to kick off his reelection campaign. Trump has lent his support to a new Republican small-donor fundraising platform, WinRed, that launched last week. Mandel Ngan/AFP/Getty Images hide caption 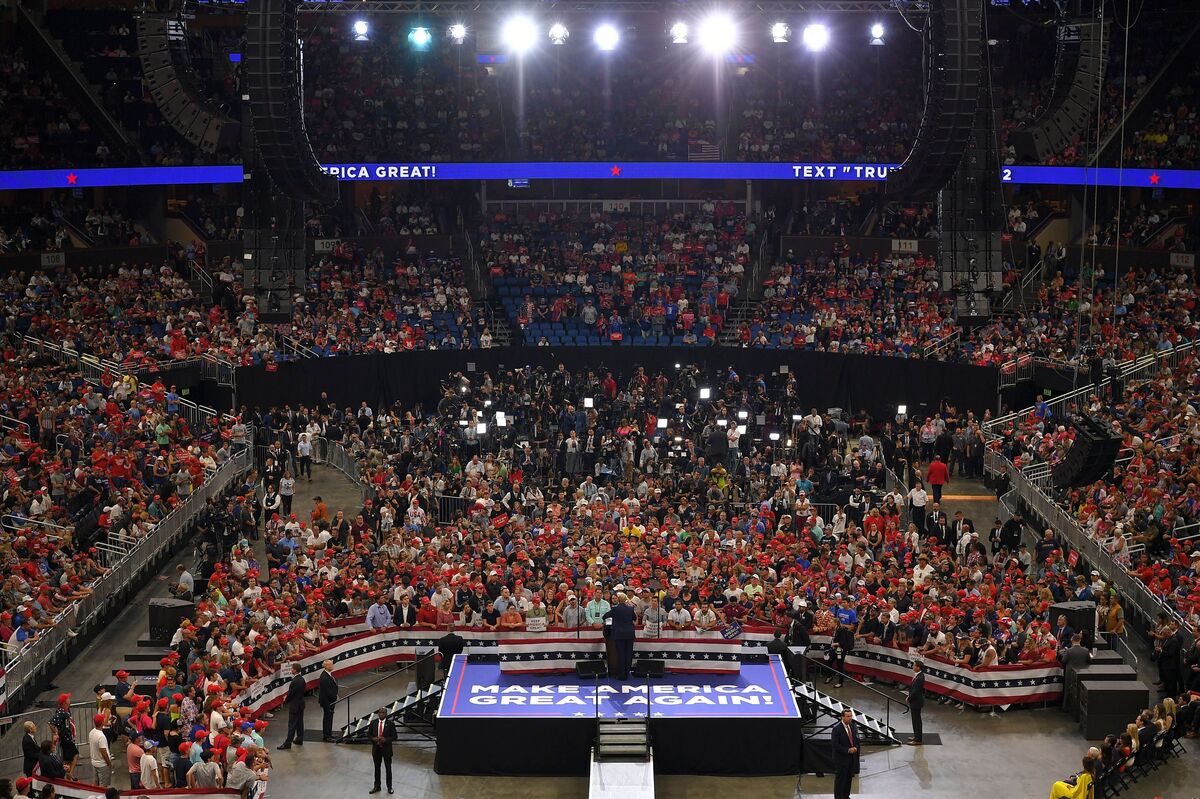 President Trump speaks at a rally in Orlando, Fla., in June to kick off his reelection campaign. Trump has lent his support to a new Republican small-donor fundraising platform, WinRed, that launched last week.

The headline posed a straightforward question: "Where is the Republican ActBlue?"

Very of the moment — except it was published more than a decade ago, during George W. Bush's administration.

Since then, Republicans have repeatedly tried and failed to harness online political contributions as effectively as Democrats have with the ActBlue fundraising platform, which has been around since 2004.

Last week, Republicans launched a new online fundraising tool called WinRed. It's a platform they hope will close the gap between the GOP and Democrats, even though the digital highway is littered with their several previous failed attempts.

WinRed, backed by President Trump's reelection campaign and Republican Party committees and congressional leaders, has the party's imprimatur in a way previous efforts did not. The effort is a partnership between Data Trust, a nonprofit clearinghouse for Republican data, and for-profit payment-processing firm Revv, and Republicans say the "green wave" of money that Democrats rode in 2018 will provide momentum for their own efforts.

It's unclear whether this latest gambit will succeed, with political committees just starting to phase in WinRed. Even if it succeeds, it will certainly take time to catch up to ActBlue.

Take the 2018 midterm elections, when Democratic House and Senate candidates outraised Republicans more than two to one in contributions from individuals. Republicans pointed to ActBlue, which helps donors more easily give money to Democratic candidates and liberal political groups, as a big reason why.

The fundraising gap brought new urgency — and a bigger push from Republican leaders and donors seeking to narrow that gap ahead of the 2020 elections.

But for WinRed to ever work as intended, it will have to overcome doubts in the party.

Operatives say that candidates will have to agree to use it and that the Republican fundraising culture must change — significantly.

"Every election cycle, there is a story of how now they're getting behind an initiative to try and set up a competitor to ActBlue," said David Karpf, a professor at George Washington University who studies how campaigns and advocacy groups use the Internet to build power in the digital age. "They haven't done it yet."

Those involved with WinRed say they are prepared for skepticism. They openly acknowledge how far behind Republicans are with small-dollar fundraising efforts.

"The best time to plant a tree is 20 years ago; the second best time is now," tweeted Parker Hamilton Poling, executive director of the National Republican Congressional Committee, one of the party committees supporting the WinRed launch.

At @NRCC we’re already closing the gap in digital. WinRed will help accelerate that. The best time to plant a tree is 20 years ago; the second best time is now.

ActBlue, a Somerville, Mass.-based nonprofit that operates separately from the Democratic Party, was founded by two friends who wanted to empower grassroots donors. It started small but grew into a behemoth.

During the 2016 presidential election, Hillary Clinton, the Democratic Party's eventual nominee, didn't use ActBlue. Sen. Bernie Sanders did — and his small-dollar strategy generated more than $200 million, primarily from grassroots donors, and sustained his presidential bid beyond expectations.

Sanders' fundraising success has inspired Democrats' sharp turn toward the grassroots during the current presidential campaign. Now, all major Democratic presidential candidates use ActBlue to raise money, and small-dollar donors are prized.

ActBlue says it now has nearly 7 million donors who have saved their information on the platform so they can give to any campaign using ActBlue with a single click. Candidates can easily fundraise through joint solicitations and divide the proceeds, creating an easy way for the party as a whole to share the wealth when someone — say, Beto O'Rourke during his surprisingly strong U.S. Senate bid last year — compels grassroots donors.

Of course, your average donor doesn't care what tool a politician uses to process a payment. But Republicans covet ActBlue efficiencies and features that make it easier and faster for donors to give, resulting, potentially, in more dollars raised.

ActBlue and Democrats "built an ecosystem that helped everybody," said Josh Holmes, a Republican strategist who was heavily involved with discussions about what to do in the wake of the 2018 election. "They could fundraise off of each other, and they could come to a centralized platform that ultimately lifted every single boat, and Republicans just frankly didn't have it."

Republicans' main barrier to creating their own ActBlue-like platform hasn't been technology so much as ideology.

This approach has had consequences: It meant the GOP didn't get the same scale and efficiencies as Democrats, whose market consolidated as more and more candidates flocked to ActBlue. Also, donors who save their information when giving to one Republican candidate might not be able to make a spontaneous one-click contribution to another.

In addition, Holmes, a former chief of staff and campaign manager for Senate Majority Leader Mitch McConnell, said Republicans missed an opportunity to ride a wave of conservative outrage during the hearings for then-Supreme Court nominee Brett Kavanaugh last year. He points to a speech that Sen. Lindsey Graham, a South Carolina Republican, gave defending Kavanaugh.

"If he would have had WinRed access at that time, I can't imagine you'd raise a penny less than $10 million," Holmes said.

"They Act. We Win," boasts the text on the WinRed homepage, and a blog post describes WinRed as "modeled after years of studying ActBlue."

Some are signaling that WinRed must imitate ActBlue, a nonprofit, in other significant ways, such as its long track record of updating its tools with new features. In a Wall Street Journal opinion piece last week, Republican strategist Karl Rove said WinRed must also show "processing fees are being reinvested in enhancements, algorithms and list building, rather than big consulting fees and salaries."

When Republicans in January initially announced WinRed — then known as Patriot Pass — they said it would launch in February.

But that and other expected dates came and went, sparking questions about why the new fundraising platform wasn't operational. The quiet name change after the announcement — reportedly driven by New England Patriots owner Robert Kraft's complaints that the name sounded too much like that of his NFL team — didn't help.

Meanwhile, behind-the-scenes negotiations, meant to resolve a tangle of competing interests and tricky questions about how the WinRed effort would be structured, took months to resolve.

The discussions involved a battalion of lawyers tasked with determining who would control the new effort and how WinRed would secure campaigns' data.

That was a particularly difficult issue as the party committees considered how their single biggest asset — their list of donors' personal information — would be used.

Say you're a donor giving $100 to your favorite candidate or candidates of choice.

If you're a Republican giving via WinRed, the fee charged to the campaign will be 3.8%, or $3.80 — plus a 30-cent flat fee, for a total of $4.10. If you choose the option of dividing your $100 donation among multiple candidates, the single credit card charge will still incur only one 30-cent fee.

If you're a Democrat making a $100 contribution using ActBlue, the fee charged to the campaign is a straightforward 3.95%, or $3.95. ActBlue also asks users to contribute voluntary "tips" as a donation to the platform.

Based on those rates, ActBlue is less expensive for contributions less than $200. WinRed's fees are cheaper for larger contributions.

WinRed is built on Revv, the payment processor used by Trump's campaign. Revv is headed by Gerrit Lansing, a former chief digital officer for the Republican National Committee and the National Republican Congressional Committee. Those involved with WinRed have been careful to say they aren't telling campaigns to drop other fundraising-platform vendors in favor of the anointed effort — but they're hoping the fact that the president's campaign and party committees are using WinRed will prove its own inducement.

Trump himself trumpeted the launch with a tweet. "This new platform will allow my campaign and other Republicans to compete with the Democrats money machine," he said, calling WinRed "a priority of mine."

Trump, who does well with small-dollar donors, is the key to attracting WinRed users. Trump donors who allowed WinRed to save their personal information would be empowered to donate money to other WinRed-using conservatives with a single click or screen tap.

Even so, donors often give money only when they're asked, and Republicans need to invest in building email lists and small-dollar donor programs via online surveys, merchandising and other outreach early in an election cycle, even if doing so doesn't provide immediate dividends, said Eric Wilson, a Republican online strategist who has worked on campaigns.

"We can build the best technology platform in the world bar none, but if you're not growing your email list, you're not going to raise money online," Wilson said.

One of the biggest outside groups supporting Republicans agrees with Wilson.

In a statement last week, Dan Conston, president of the Congressional Leadership Fund super PAC, which spent $138 million supporting Republican House candidates in 2018, said the only way WinRed will work is if candidates engage in such efforts.

And from now on, Conston said, the super PAC "will be adding small dollar fundraising to our evaluation of GOP campaigns" as it decides which candidates will benefit from the millions of dollars it has to spend.

In case the carrots offered by WinRed aren't enough, that's a big stick.

Chris Zubak-Skees contributed to this article.

The Center for Public Integrity is a nonpartisan, nonprofit investigative news organization in Washington, D.C. You can follow Carrie Levine on Twitter: @levinecarrie.