Accessibility links
Hail Hits Mexico's Guadalajara In Freak Summer Storm "Hail more than a meter high, and then we wonder if climate change exists," said Enrique Alfaro Ramírez, the governor of Jalisco state. The Mexican army is helping to dig out the city. 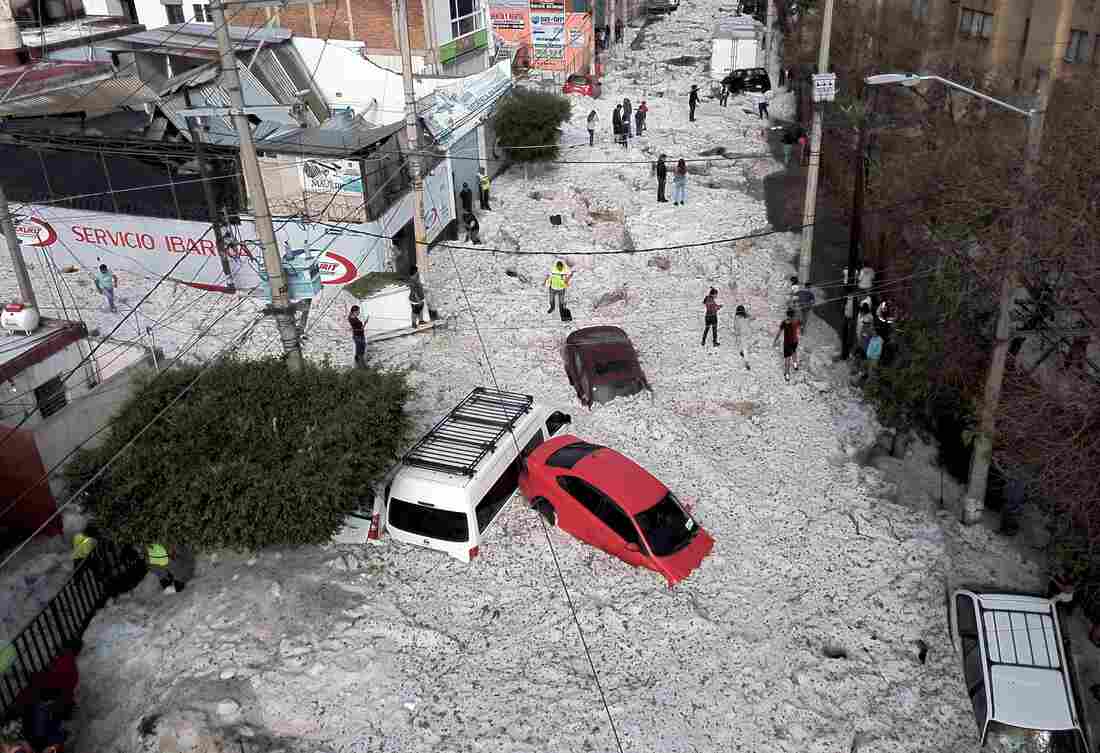 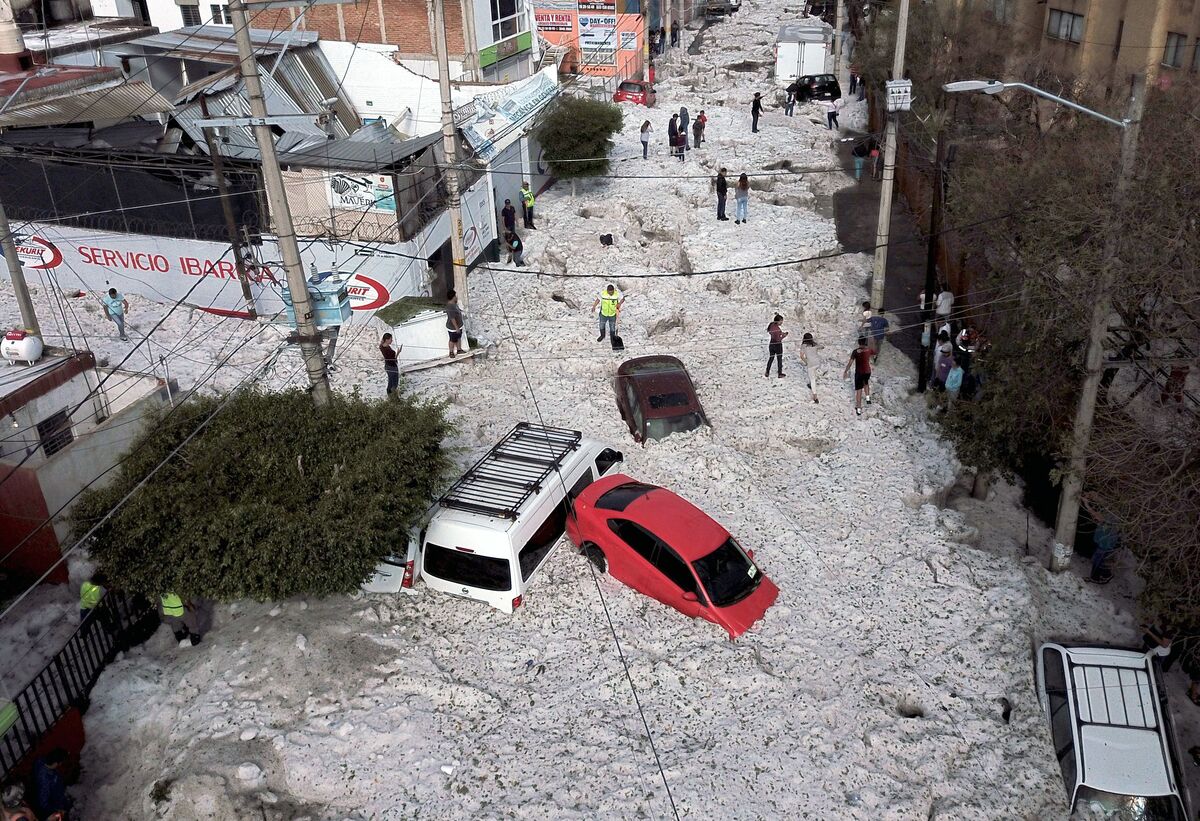 Vehicles were buried in hail on Sunday in eastern Guadalajara, Jalisco state, Mexico. The accumulation of hail buried vehicles and damaged homes.

People in Guadalajara, Mexico, woke up on Sunday to a thick blanket of ice over areas of their city, after a freak hailstorm that damaged houses and left cars partially buried.

This is particularly striking because it's the middle of summer. In the past month, temperatures most days have hit 90 degrees Fahrenheit or over.

Authorities say more than 450 homes were affected by the heavy hail, including some where the ice pushed through doors and windows, according to the local El Informador newspaper.

Guadalajara's mayor, Ismael del Toro, told the newspaper that 10 people had been treated for symptoms of hypothermia.

The Mexican army and local authorities were deployed to use heavy machinery to dig out the city of nearly 1.5 million people, which is among the most populous in Mexico. 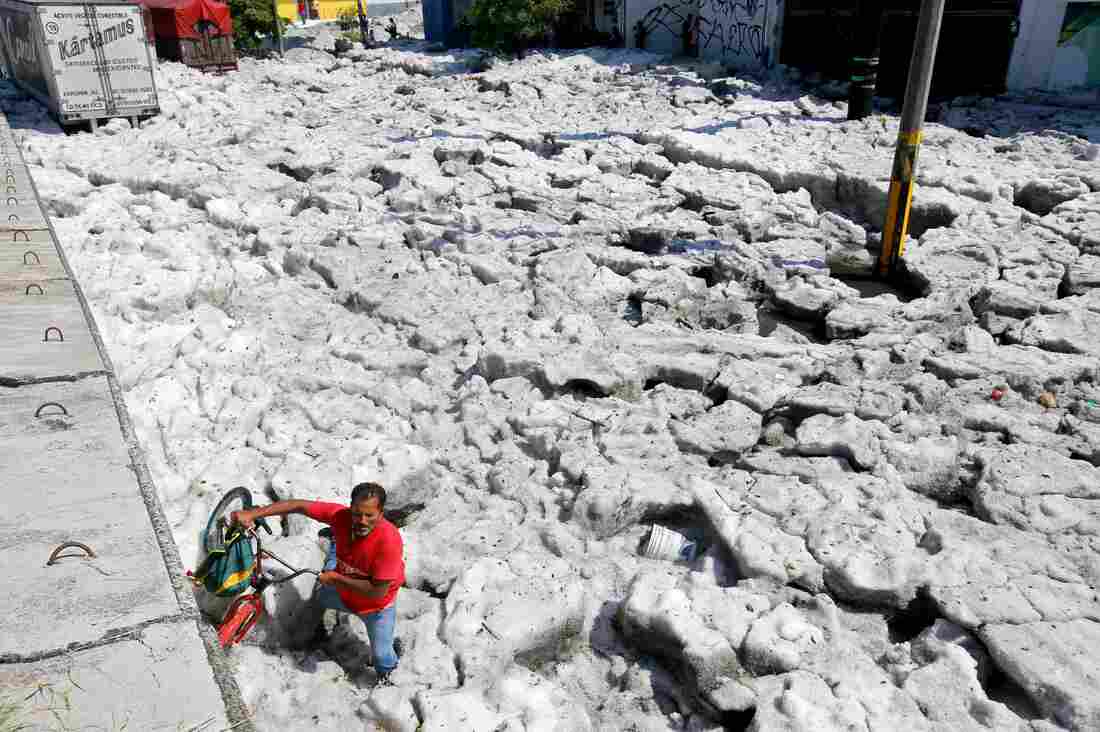 The blanket of hail made it difficult to get around the Mexican city of Guadalajara on Sunday. Ulises Ruiz/AFP/Getty Images hide caption

"Hail more than a meter high, and then we wonder if climate change exists," Jalisco state Gov. Enrique Alfaro Ramírez wrote on Twitter. He added that authorities were working to help citizens whose homes were damaged.

"This is a natural phenomenon that we haven't seen before," the governor said in a video posted to Facebook. As he gestured to the blanketed street, he added: "The hail looks like snowfall." 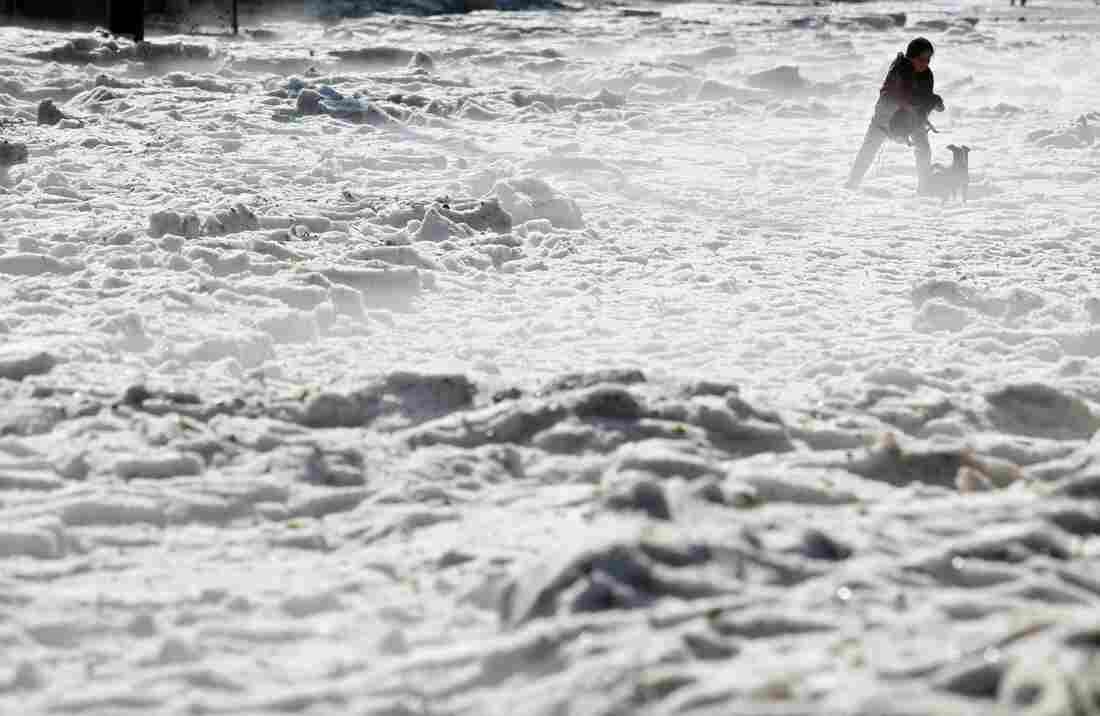 June is typically one of the hottest months of the year in Guadalajara. Ulises Ruiz/AFP/Getty Images hide caption

As the hail melted, snowy-looking streets turned into rivers, El Informador reported, adding that some cars were swept away or pushed on top of each other. The rush of water and debris blocked a major highway for hours.

Video of a river of melted hail and ice was posted on social media:

In the Rancho Blanco area of the city, which was particularly hard-hit, some 30 vehicles and 60 homes were damaged, Jalisco Civil Protection officials said on Facebook.

It's worth noting that the actual hailstones that hit Guadalajara were rather small — even smaller than a marble, according to the BBC — which might have limited some of the damage.

John Allen, a meteorology professor at Central Michigan University, tells NPR that this storm is impressive for the amount of hail rather than the size of the stones.

"Given that Guadalajara is well into the subtropics, you tend to have a significant influence in melting as hailstones fall from the cloud toward the surface, and so actually getting hail to stay on the ground like this requires the extreme volumes of hailstones to cool the air near the ground," says Allen. 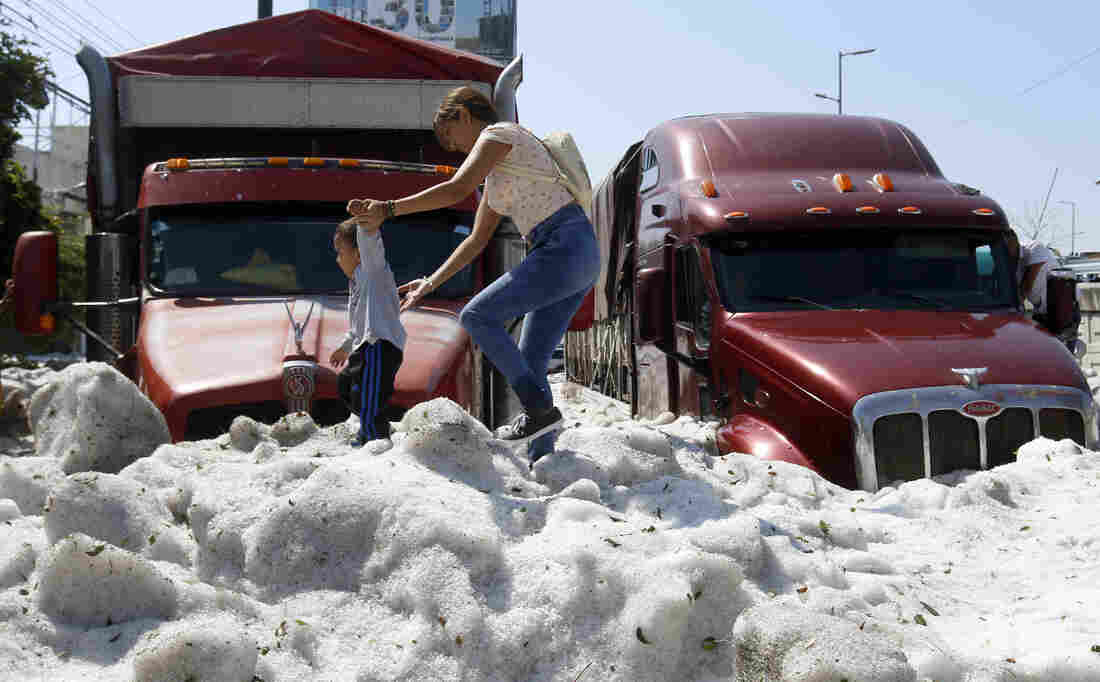 A woman and a child walk on hail in eastern Guadalajara on Sunday. Ulises Ruiz/AFP/Getty Images hide caption

Hail forms when "thunderstorm updrafts are strong enough to carry water droplets well above the freezing level," according to NASA. These droplets freeze into hailstones that fall to earth.

As crews work to clear away the ice, they may get a hand from the weather. Guadalajara is expected to see significant melting on Monday, with thunderstorms likely and temperatures forecast to reach 81 degrees Fahrenheit.