Accessibility links
NPR Review: 'Growing Things,' By Paul Tremblay Horror writer Paul Tremblay's new short story collection is full of ghosts, monsters, nightmares and apocalypses — all of which feel so close by they might be happening to you, right now. 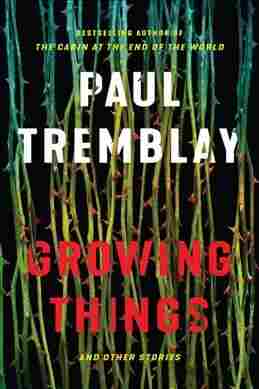 Growing Things and Other Stories

It is a terrible thing to read a Paul Tremblay story.

Terrible because you know, going in, that it's probably going to mess you up. That his stories and his words have this way of getting under your skin. Of crawling inside you like bugs and just ... living there. They become indistinguishable from memory. They become a part of all the cells and goop that make you you.

It's terrible to read these stories, but you do it anyway. I do it anyway. Like smoking cigarettes or driving too fast late at night, I know they're bad for me, dangerous, but that's part of the allure, I guess. They're fun because they're dangerous. Because, word by word and title by title, I can feel the damage accruing. The scars.

But I don't care. Worth it. Totally. Tremblay writes horror stories. Weird stories. Effed-the-eff-up stories which seem benign (sometimes) until you close your eyes or shut off the lights and feel them moving around in the dark. In his new collection, Growing Things, he writes about monsters and ghosts and monsters and nightmares and memory and monsters and the end of the world. Apocalypses large and small haunt the space between the covers. The kind that could be happening, that have happened, are just about to happen right now. They're the kind of stories that make you want to check your phone just to make sure what you're reading about isn't already on the news. That make you want to look over your shoulder to make sure the monster isn't right behind you.

And god, these stories. They take you like a bullet just south of the heart, opening something up inside you that feels awful and wrong and full of poison. Remember Merry and Marjorie from Head Full Of Ghosts? They're back. They live on in the closing story, "The Thirteenth Temple," and in the title story, in a kudzu nightmare tale about a house, a neighborhood, a world, a family ruined by plants.

Shut up. The fact that it sounds so stupid is why it works. Because end-of-the-world stories almost never have anything to do with the actual end of the actual world, but the shattering effect of mounting pressure on whatever poor characters Tremblay's focus falls on.

"Growing Things" (the story) is a story about stories. The lifeline of stories. Growing Things (the book) is a book of stories about stories. About experimentation with form and style and (of course, because Tremblay) about an internal criticism of same. "Notes From the Dog Walkers" is a crazypants epistolary novella, constructed of increasingly unhinged notes from a series of dog walkers to the writer Paul Tremblay. It references past works, past mistakes, internally references other stories in its same collection and, ultimately, itself as it spirals down into creepy madness.

"Something About Birds" is a story framed by the fragments of an interview with a famous author (not Tremblay) by an aspiring author and blogger (also not Tremblay). The young author talks pleasantly to the older author about his work, the older author invites the younger one to a party. As an invitation, he gives him a small, decapitated bird's head. In "Swim Wants to Know if it's as Bad as Swim Thinks," a mother rescues her daughter from a giant monster stomping the town flat. Or, maybe, a junkie mom violates a court protective order and kidnaps her daughter. "Nineteen Snapshots of Dennisport" is structured around a series of photos, carefully arranged and explained by the narrator; it's a summer vacation story that takes a terrible twist that'll hurt you if you grew up normal and absolutely wreck you if you had complicated parents, too.

... these stories. They take you like a bullet just south of the heart, opening something up inside you that feels awful and wrong and full of poison.

There's a House Of Leaves-style short in here that's all about the spaces between the words. I want to tell you about "The Teacher" because it was, maybe, the most affecting, but I can't find the right word to describe it. A word that means something which feels absolutely real, absolutely horrifying and wholly inevitable all at the same time. There's a Hellboy story in here ("Her Red Right Hand"). There's even a choose-you-own-adventure story that is awful, beautiful, gorgeous, sadder than sad. Horror, I guess, because there are ghosts in it. Kinda. But horror only in that way that life is a horror story, ever unfolding. That growing up is a horror story. That growing old is.

And there are more, too. So many more. I haven't told you about the ice monster story. Or the swamp monster story (which is, maybe, the funniest). Or "It Won't Go Away" which I read twice just because I wanted to make sure I understood what was going on and, after the second reading, still wasn't completely sure I got it.

Growing Things (again, book) should be read in order for the full effect. The placement of every single story doesn't matter, but the placement of some of them absolutely do. It should be read in big, frantic gulps, like breathing while nearly drowning. And when you're done, read the author's notes at the end. Because Tremblay explaining himself is precisely the kind of decompression required. To sit, for just a moment, with the entirely normal man behind these stories and have him tell you that it's all okay, that they really are just stories, nothing more, written between preparing for the classes he had to teach and vacations with his family, is ... comforting somehow. A slow return to reality.

And all the horrors it contains.