Accessibility links
Trump's July 4th Plans Raise Concerns About Costs For Taxpayers Lawmakers are still waiting to hear the price tag on this year's event. Thursday's celebration is expected to feature military hardware and a speech by President Trump at the Lincoln Memorial. 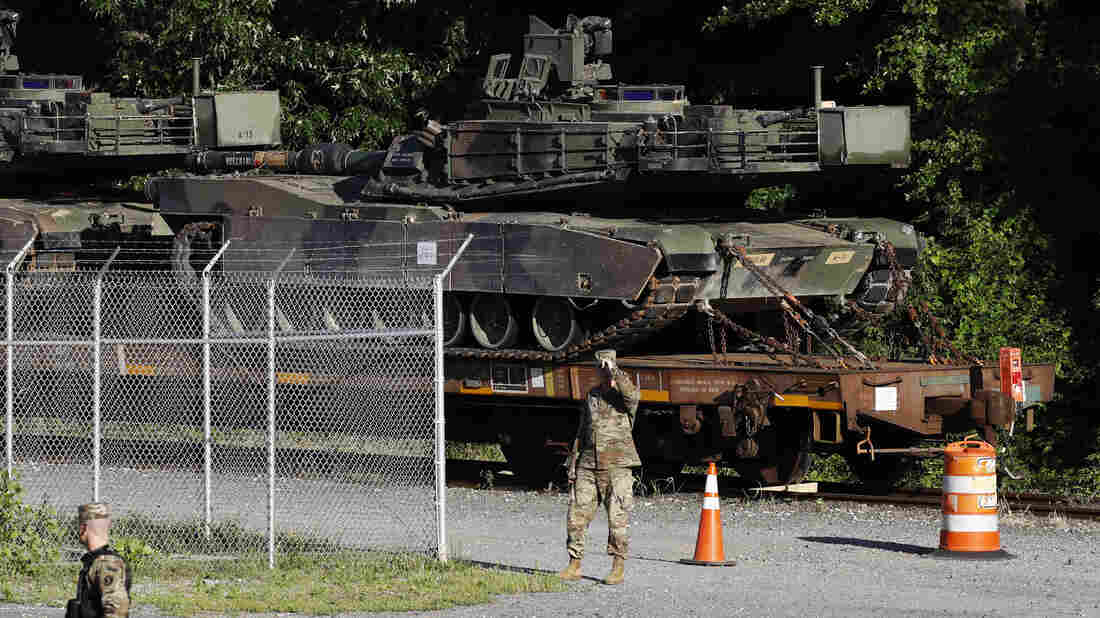 Military police walk near Abrams tanks on a flatcar in a Washington, D.C., rail yard on Monday, ahead of the July 4 celebration that President Trump says will include military hardware. Patrick Semansky/AP hide caption 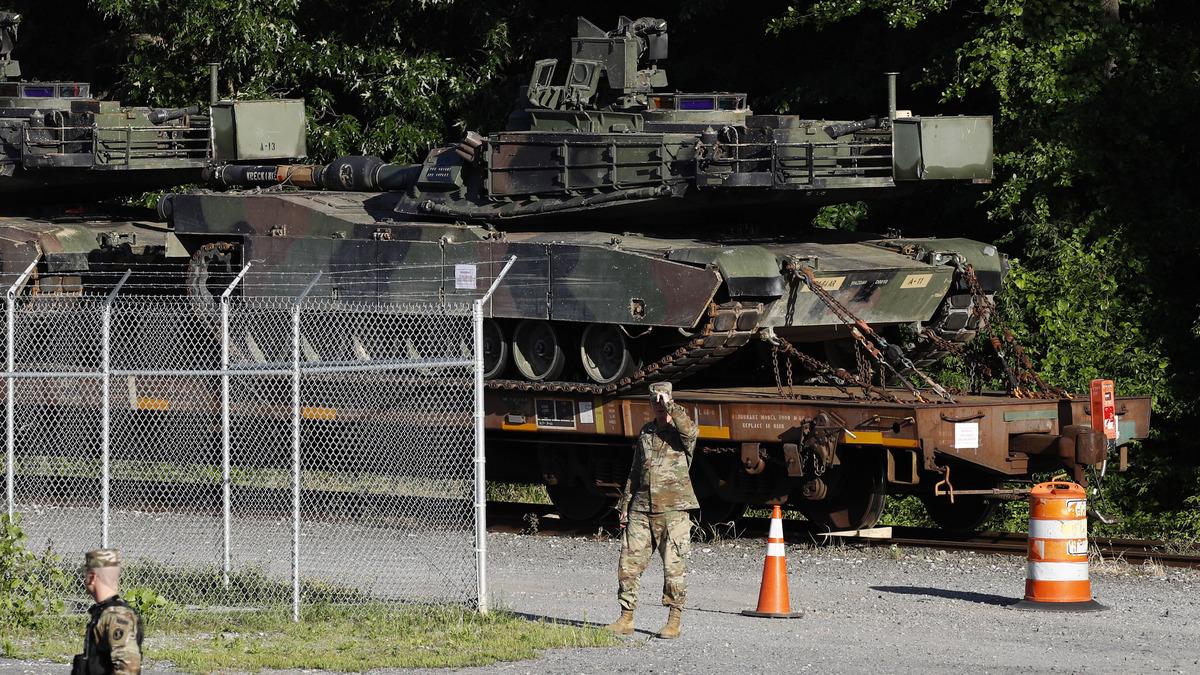 Military police walk near Abrams tanks on a flatcar in a Washington, D.C., rail yard on Monday, ahead of the July 4 celebration that President Trump says will include military hardware.

American taxpayers are looking at a bigger bill for this year's Independence Day party in the nation's capital.

For this Fourth of July, President Trump has added an address from the Lincoln Memorial, tanks stationed in the area, an extended fireworks display and military aircraft flyovers.

Democrats in Congress are complaining about the added expenses.

"There's going to be a big price tag for this and the taxpayers will have to pick up the tab," said Sen. Chris Van Hollen, D-Md., member of the Senate Appropriations Committee, which directs spending for such events.

WAMU: Everything You Need To Know About The Fourth In D.C.

The annual July 4 parade will still happen that morning, followed by a new 6:30 p.m. Trump address from the Lincoln Memorial with military flyovers and performances by the Army Old Guard Fife and Drum Corps and others. That evening, the Capitol Fourth concert, also a trademark of the usual D.C. holiday, will be followed by an extended fireworks show lasting 35 to 40 minutes.

Van Hollen and other Democratic appropriators on Capitol Hill have raised questions and concerns for months that spending for the day could go haywire.

And just before the big event, they still don't know how much it will all cost.

Congress waiting on total costs; experts say it's not cheap

The Federal Aviation Administration said it would suspend operations at Reagan National Airport for 1.5 hours for Trump's speech and flyovers. The aerial program will feature the jetliner used for Air Force One and aircraft representing all five military services, including the Navy's Blue Angels, said Jeffrey Reinbold, a superintendent of the National Park Service.

A military official told NPR it could also include F-35s and F-18s. And there will be military tanks parked along the National Mall, Trump said.

Democratic Debate Highlights A Big Advantage For Trump. It's The Economy

"We're gonna have a great Fourth of July in Washington, D.C. It'll be like no other, it'll be special and I hope a lot of people come and it's going to be about this country and it's a salute to America," Trump said from the Oval Office Monday. "I'm going to be here and I'm going to say a few words and we're going to have planes going overhead, the best fighter jets in the world and other planes too. And we're gonna have some tanks stationed outside."

NPR's multiple requests for costs related to the plans, as well as more extensive details on the additional military personnel, equipment and security for the day from the Interior Department, National Park Service, U.S. Secret Service, the Pentagon and the five military services went unanswered. A military official said the White House was not approving Pentagon requests to share such details.

It won't be cheap, experts said. 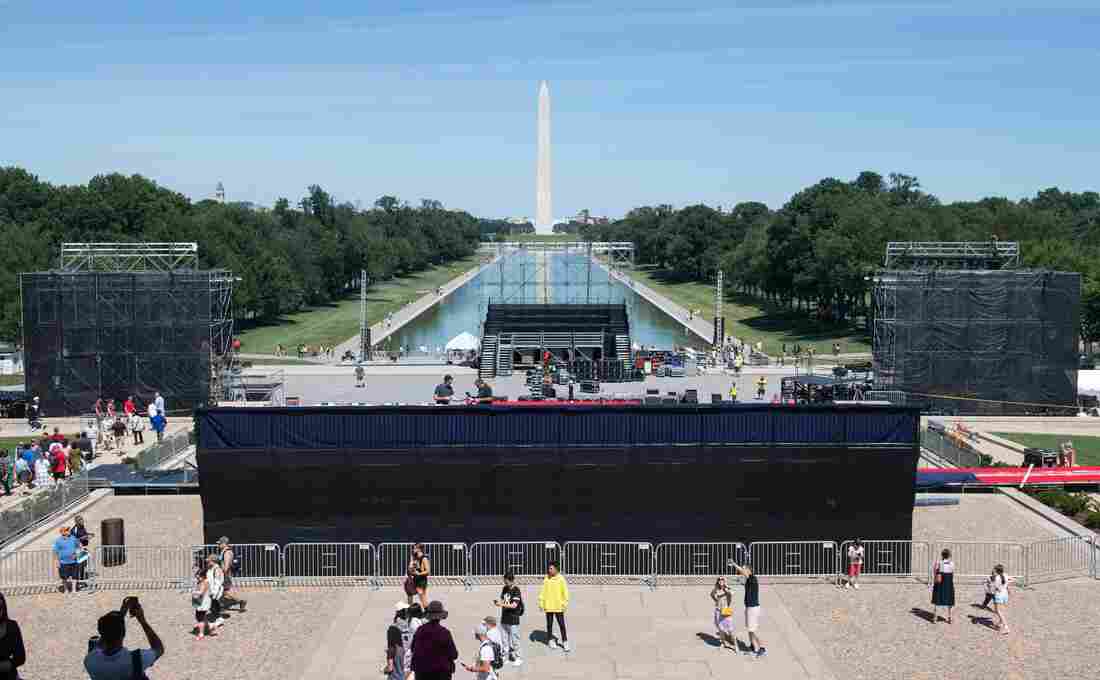 Workers build a stage and bleachers Monday for the "Salute to America" Fourth of July event with President Trump at the Lincoln Memorial on the National Mall. Saul Loeb/AFP/Getty Images hide caption

University of Denver professor Andrew Sherbo, who tracks such figures, said the Boeing 747 used for Air Force One could come at a cost of $205,000 an hour (the jetliner is only considered Air Force One when the president is aboard).

The cost per flying hour for the F-35 can be $20,000 or more, according to Department of Defense comptroller figures.

The Blue Angels could cost a more reasonable $6,000 per day, since air shows are tied to their training, said Sherbo, a former Pentagon official who now teaches finance.

The Capitol Concerts portion of the program, plus the annual Memorial Day concert, is budgeted at $6.4 million from the National Park Service budget, which is under the Interior Department, said Annie Orloff, Udall's press secretary.

It will be followed by a joint show put on by two firework companies, Phantom Fireworks and Fireworks by Grucci, that will launch from behind the Lincoln Memorial for a display lasting 15 to 20 minutes. As a result, they are donating an estimated $750,000 or more as part of the plans, said William Weimer, vice president of Phantom Fireworks.

"It will be a pretty overwhelming display," said Weimer. "We saw an opportunity and approached the government in March to make the donation and try to give back to the country that has been so good to us. ... It's a privilege and an honor for us to do this."

They will be followed by Garden State Fireworks, a mainstay of the annual D.C. program since 2013, which will put on a 20-minute show from a new location at West Potomac Park. It will come at a cost of more than $250,000, said Christopher Santore, a choreographer whose family founded the company in 1890. 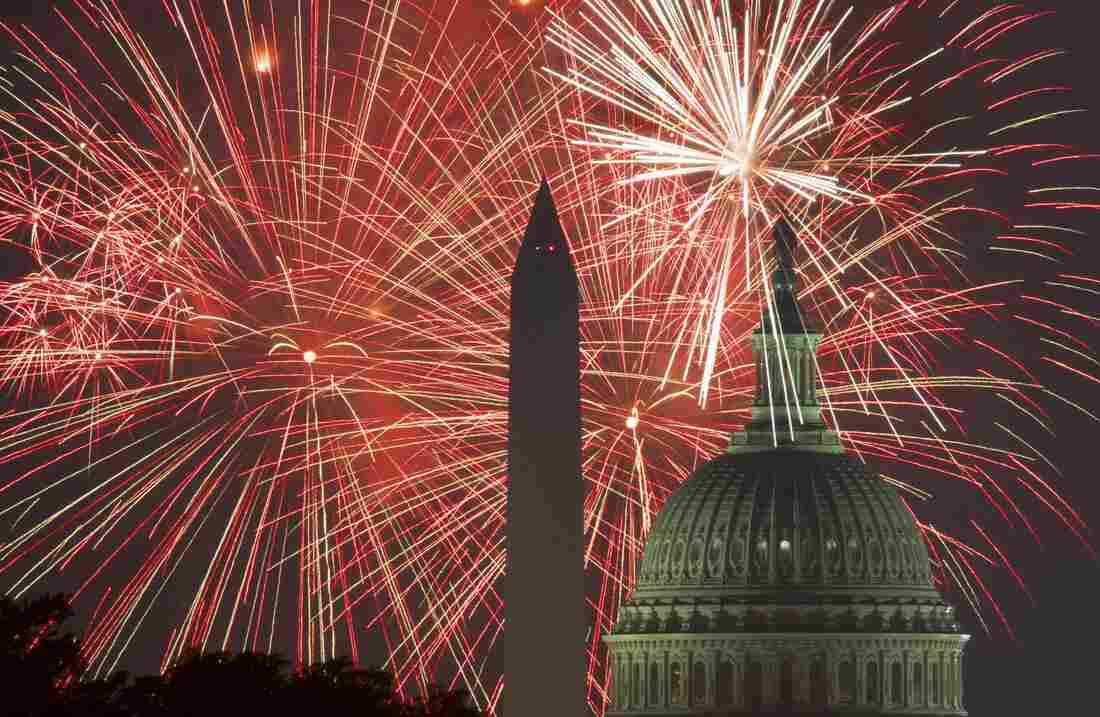 Mark Cancian, a senior adviser with the Washington think tank Center for Strategic and International Studies, said since the Capitol's Fourth celebration is paid by three different sources of money, it's a hard tally to track down in a traditional year.

Add to that all the new elements for the presidential address and extended programming, and the costs become even fuzzier.

"It's a good question," Cancian said. "It's difficult to answer."

Udall, Van Hollen and others have pressed Bernhardt and his agency for answers. They have warned that taxpayer funds can't be used for a political rally and say Trump's plans appear to cross that line.

The White House is issuing special VIP tickets to access a new, restricted area at the steps to Trump's speech as well as halfway along the Lincoln Memorial Reflecting Pool.

A White House official said the area is being reserved for friends, family, Cabinet officials and possibly members of Congress. Military personnel, who are slated to perform, will also be in the ticketed area.

On Tuesday, a Republican National Committee official confirmed it had received a "small number of tickets" to distribute for the special section. The official said it was similar to other customary moves under Democratic and Republican administrations to share tickets for Christmas open houses and garden tours at the White House.

But some Democrats were quick to disagree.

Udall noted there are specific regulations that bar taxpayers from paying for a partisan event, and propaganda is prohibited. Trump's plans seem to veer into that "very tricky area," he said.

"It is unacceptable that the Interior Department is failing to inform Congress about how it plans to spend taxpayer money to fund the president's lavish July 4th plans, which reportedly include special access to the National Mall for the politically connected," Udall said in a statement Tuesday. "The American people deserve to know how much of their money the president is spending to turn their July 4th celebration into a de facto campaign rally. All reports indicate that the president is planning to turn a national day of unity into a day of vanity – trying to use the military for political purposes and doling out perks to his political backers – at the taxpayers' expense. We need answers."

However, a White House official countered that notion and said Trump's speech will focus on a unifying theme.

"The president has been very clear that he wants to help all Americans celebrate America. It's America's birthday and he wants to celebrate America, our flag and our great military and the men and women who serve in it," the official said. "This speech is not going to be political. It will be a celebration and salute to America."

In a May congressional hearing, Udall and Sen. Lisa Murkowski, R-Alaska, chairwoman of the Senate Appropriations Committee subpanel on interior and related agencies, said they wanted cost figures for the new Fourth plans.

"You know that we had asked for those numbers on that," Murkowski told Bernhardt. "We do want this celebration that is a wonderful celebration and a great tribute to our nation to be able to continue and to have the public continue to enjoy it."

They say there's precedent to worry.

The Trump administration still owes the D.C. administration $7.3 million from the January 2017 inauguration. As a result, members such as D.C.'s representative in Congress, Del. Eleanor Holmes Norton, are sounding the alarm that appropriators must replenish the account, known as the Emergency Planning and Security Fund, before it goes dry.

"We are very concerned with an event we can't even price at a time when we are owed money," Norton said. "And I don't think the city can refuse to provide the necessary security. So it is extremely unfair to the city to hold an unprecedented event and not at least choke up money to make it happen."

"It will be wild"

After Trump attended the French celebration of Bastille Day in July 2017, he said one of his first calls was to replicate and "try and top it." The plans, which were slated for Veterans Day Weekend in November 2018, were scratched after word leaked of a $92 million price tag.

Then in February, Trump announced the plans to "HOLD THE DATE" on Twitter.

HOLD THE DATE! We will be having one of the biggest gatherings in the history of Washington, D.C., on July 4th. It will be called “A Salute To America” and will be held at the Lincoln Memorial. Major fireworks display, entertainment and an address by your favorite President, me!

"We will be having one of the biggest gatherings in the history of Washington, D.C., on July 4th," Trump tweeted Feb. 24. "It will be called 'A Salute To America' and will be held at the Lincoln Memorial. Major fireworks display, entertainment and an address by your favorite President, me!"

However, some groups are determined to make it clear Trump isn't their favorite president. And that could mean more demands for security.

Progressive political organization VoteVets, which largely supports Democratic military veterans on Capitol Hill, has raised about $40,000 off its plans to counter Trump.

The group is helping spearhead an effort to pass out thousands of shirts on the Fourth featuring the late Arizona Republican Sen. John McCain, the Navy war hero and lawmaker who died last year and remains a target of Trump's ire.

Activist group Code Pink will display the "Baby Trump" blimp that has been seen at protests around the world. The group received a physical permit this week to stand the 20-foot balloon on the northwest quadrant of the National Mall at 17th Street, said co-director Medea Benjamin.

The group will also be passing out 100 miniversions of the balloons, Benjamin noted.

"It will be wild," she said. "There will be tons of people."

A previous version of this story said the Capitol Concerts portion of the July 4 program is budgeted at $6.4 million. That figure actually includes the Memorial Day concert as well.