Accessibility links
Pelosi Was Advocate And Beneficiary Of Big Tech, But Now Public Critic Facebook CEO Mark Zuckerberg called the House speaker to discuss an altered video of her. She didn't call back but met with his former partner, who has urged breaking up the social media giant. 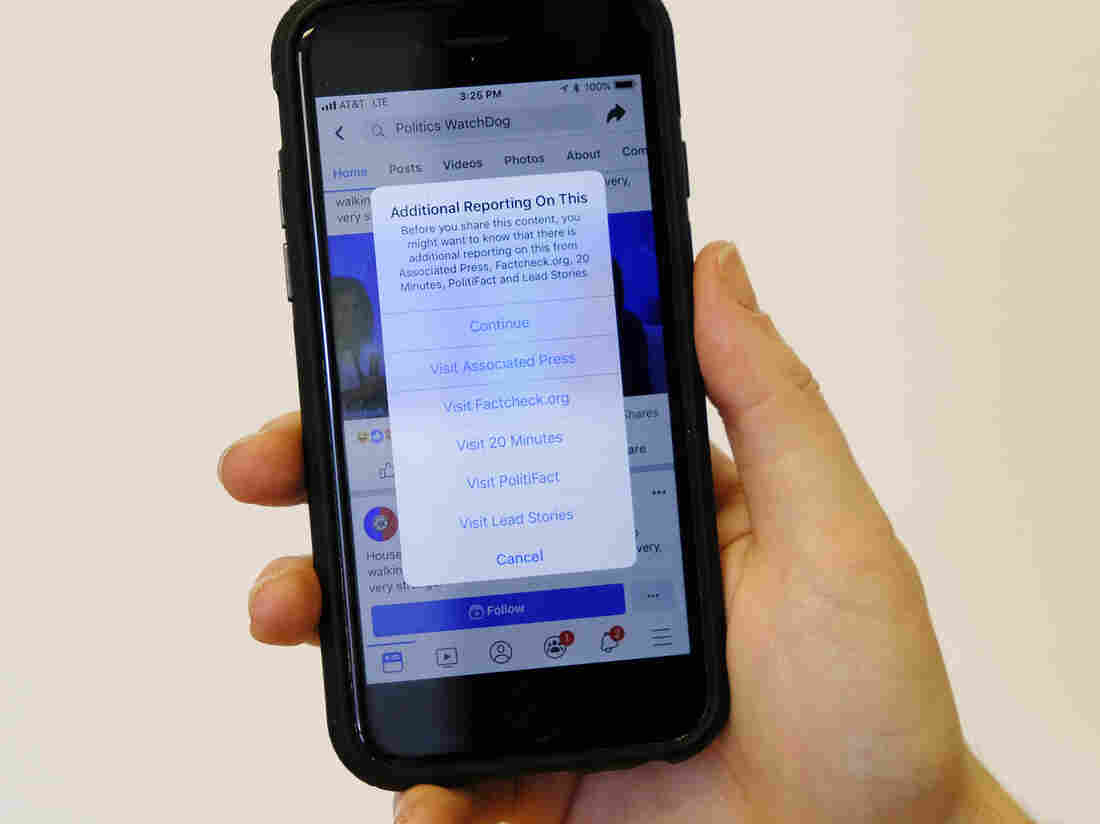 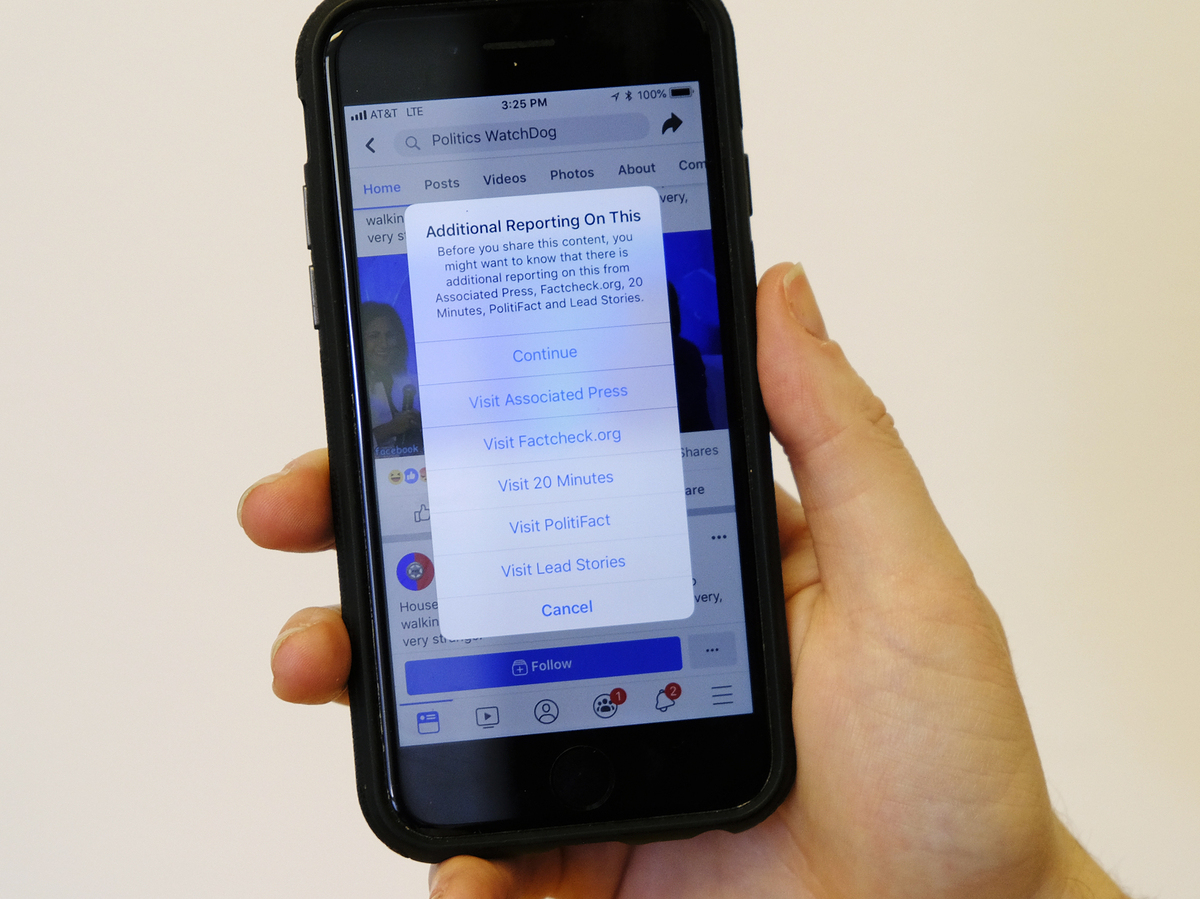 A smartphone shows a Facebook notice that says additional reporting is available regarding a doctored video that purported to show House Speaker Nancy Pelosi slurring her words.

Following Facebook's decision not to take down an altered video of Pelosi that suggested the speaker had been drunk, Zuckerberg reached out personally to the speaker, which was first reported by The Washington Post last month.

In the time since, Pelosi has still not returned the powerful executive's call, according to a source familiar with the speaker's views. While spurning Zuckerberg, the speaker has since taken a meeting with Chris Hughes, an original Facebook founder who has made waves recently by calling for Facebook to be broken up.

And with the speaker's blessing, the House Judiciary Committee's Antitrust subcommittee launched a probe into whether too much power has been concentrated in a small number of U.S. tech firms. The investigation was launched just days after the altered video of Pelosi was circulating.

"We are living in a monopoly moment. And if you look at in particular the digital marketplace ... there's tremendous market concentration — and that presents special implications for workers and consumers and users of those platforms," said Rep. David Cicilline, D-R.I., who is leading that investigation as chair of that subcommittee.

He said the probe was part of the Democratic Party's broader goal of looking at the growing concentration of economic power in America, which he said has contributed to wage stagnation in recent years.

Cicilline told NPR that Pelosi was consulted about the investigation before it was publicly announced and that "she's been very supportive of it." He added that he had met with Hughes recently, calling the former Facebook co-founder "a very eloquent voice about the urgency of this moment."

These meetings with Hughes and the launch of what is expected to be an 18-month antitrust investigation are signals that Democrats on Capitol Hill are serious about curbing the power of Facebook and other big tech firms.

And it's a reflection of how the once-cozy relationship between top Democratic leaders and social media companies have become increasingly strained as Silicon Valley grapples with how to deal with fast-growing concerns about privacy, disinformation and allegations of censorship.

"It's very clear these technology companies cannot be trusted to regulate themselves," Cicilline said.

Pelosi has historically been a booster and beneficiary of leading tech companies, many of them based right outside her California district. But Russia's use of social media platforms to spread disinformation — among other scandals in the industry — have given her and her party pause.

Prior to 2016, the tech sector was a place where Democrats could obtain what they viewed as "clean money" — uncontroversial funds to propel their campaigns.

"The Democratic Party in the '90s found Wall Street money to be quite amenable," said Jeff Hauser, who heads the watchdog group The Revolving Door Project. "That became toxic in 2008. And that funding source for Democrats has been replaced by big tech for the last decade."

Pelosi is no exception. Over the course of her career, she has received six-figure sums from Microsoft and from Alphabet, the parent of Google, according to the Center for Responsive Politics. She has also taken in more than $76,000 from Facebook and more than $30,000 from Amazon.

All told, tech firms have provided Pelosi's political efforts more than $1.3 million over the course of her career, said Sheila Krumholz, the executive director of the Center for Responsive Politics.

Historically, the chumminess was reciprocated. Congress has long had a hands- off attitude for this industry, seen by many Democrats both as a source of innovation and generally aligned with progressive values.

"They had always been perceived by progressives as doing a social good, as socially progressive, as being from areas represented by progressives. ... So there really wasn't a perception that these companies were dangerous," said Sarah Miller, who is a co-chair of Freedom from Facebook, a progressive coalition calling for Facebook's breakup.

But Democrats faced a turning point when Russians used social media to spread false information during the 2016 presidential election, and, according to the U.S. intelligence community, sought to assist Donald Trump's campaign. Increasing concerns about consumer privacy have increased pressure on Congress to act in recent months.

"I don't think that progressives really understood the core business models of these companies and how they are based on deep surveillance of their users, and then using that data ... to target advertising in ways that we've seen are incredibly dangerous for democratic societies," Miller said.

Big tech's challenges were made personal for Pelosi when an altered, false video made the rounds on Facebook. The video had been edited to make her sound as if she were slurring, and suggested that she was drunk.

Pelosi told KQED in an interview, "I don't even drink, so I can chalk it up to chocolate, but I don't drink alcohol."

Facebook took more than a day to catch on to the video and decided to keep the video up, citing its internal policies. The video was ultimately flagged as false and the video's distribution was limited.

Pelosi found that action insufficient. In her view, the incident illustrated how Facebook had facilitated foreign falsehoods during the 2016 campaign.

"Now we have said all along, 'Oh poor Facebook. They were unwittingly exploited by the Russians,' " Pelosi told KQED. "Facebook has proven, by not taking down something they know is false, that they were willing enablers of the Russian interference in our elections."

Facebook declined to comment for this article. But Zuckerberg recently spoke at the Aspen Ideas Festival, calling the Pelosi video incident an "execution mistake" because of how long it took for Facebook's systems to flag the video for review.

Zuckerberg also pushed back against calls for Facebook to be broken up, arguing that it is Facebook's size and power that allow it to tackle important questions like election integrity and how to remove harmful content.

"What we are investing in safety and security is greater than the whole revenue of our company was earlier this decade when we went public," Zuckerberg said at the conference.

But Pelosi's ire is a signal from Democrats to the broader industry.

Some of the same tech companies that have been among the Democratic Party's strongest supporters may soon discover that the instinct to celebrate their innovation is being replaced with an inclination to regulate.