Accessibility links
Pete Buttigieg Tries To Woo Black Voters Amid South Bend Shooting Controversy The South Bend, Ind., mayor and presidential candidate has been dealing with the aftermath of a fatal shooting in his hometown in which a white officer shot a black man. 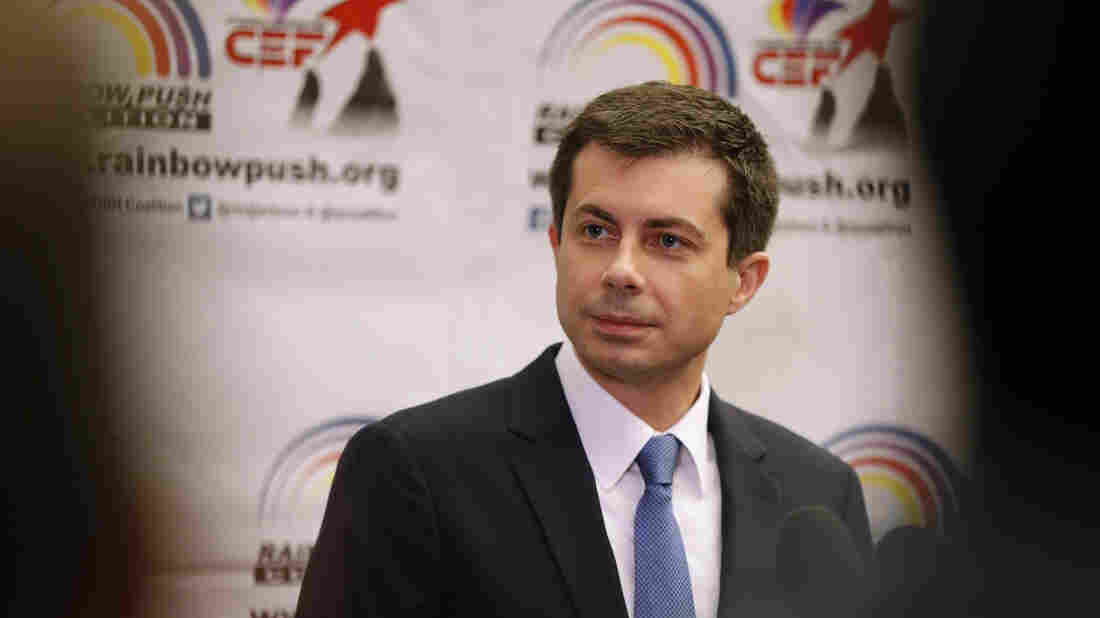 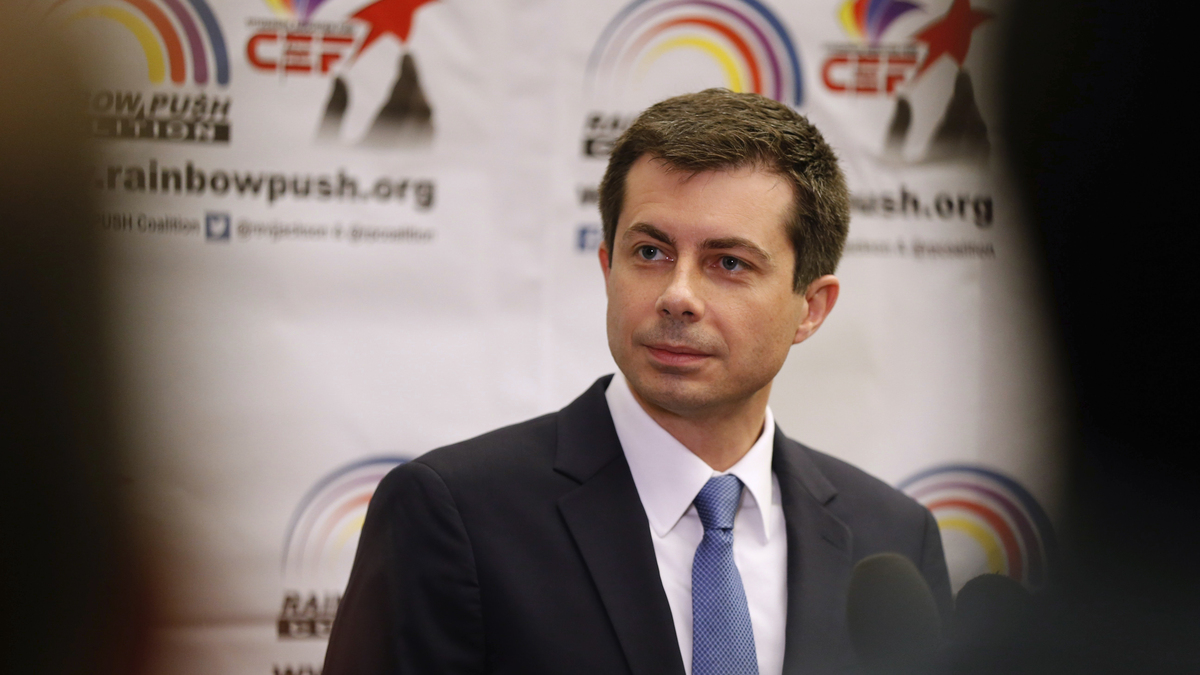 South Bend, Ind., Mayor Pete Buttigieg stressed Tuesday that more work needs to be done not just in his community but across the country to make sure police understand that it's "not anti-police to be pro-racial justice."

Taking questions from reporters at the Rainbow PUSH Coalition with the Rev. Jesse Jackson by his side before making a broader speech, the Democratic presidential candidate again acknowledged that his administration hasn't done enough to fix the racial gap within the South Bend police force.

"I can't say we've done everything we need to do," he said at the Chicago event, "because the results aren't there."

But he added that his isn't the only community where this is happening, that he has taken steps to try and that there is also a problem with young African Americans not trusting police and therefore not wanting to become police officers.

"It might make sense," he said, "to be part of law enforcement and do that job well."

Jackson, who heads the Rainbow PUSH civil rights organization, was asked what he thinks of how Buttigieg has handled the situation in South Bend.

During his speech, Buttigieg said South Bend is a "city that has known its measure of pain." He said that he has worked to increase police professionalism, decrease bias, increase de-escalation tactics, but "whatever we've done has not been enough," he said.

Buttigieg has been embroiled in a controversy that has threatened his presidential campaign after a white South Bend police officer shot and killed a black man.

The racial divisions in South Bend are not new ones and did not start under Buttigieg, but they are making it harder for Buttigieg to try to win over voters of color who aren't very familiar with him in the first place. He has struggled to win over black and brown voters, polling far down in surveys with them.

The latest officer-involved shooting controversy took Buttigieg off the presidential campaign trail, and he faced black residents who vocally let him know of their frustrations.

"You're running for president? And you want black people to vote for you? That's not gonna happen," one woman said, talking over Buttigieg, as he tried to address the crowd's concerns.

"I'm not asking for your vote," Buttigieg responded.

"You're not gonna get it, either," the woman said back.

On the shooting, Buttigieg has said he won't pass judgment until an investigation is completed, but he has noted that he is frustrated by the fact that the officer's body camera was not turned on.

Police say Eric Logan was in a parking lot, had a knife, didn't respond to police and then threw the knife at police Sgt. Ryan O'Neill, who then shot Logan.

South Bend's police force is 6% black while the city is 26% black. The representation has gotten worse during Buttigieg's tenure, and earlier in his tenure, Buttigieg fired the city's black police chief.

He held a town hall last month to try to hear residents. "We have tried but not succeeded to increase diversity in the police department, and we need help," Buttigieg said.

But the town hall only saw tensions flare even further. "Get the people that are racists off the streets," one resident said, per the Indianapolis Star. "Reorganize the department and get those people off the streets now."

Buttigieg then emerged at the first presidential debates, where he was asked about the representation of South Bend's police force. When asked why the percentage of black officers hasn't improved, he didn't make excuses.

At the Rainbow PUSH event on Tuesday, Buttigieg proposed a 50% reduction in incarceration rates in the country by legalizing marijuana and eliminating incarceration for certain petty drug crimes; to hold police accountable to professionalization standards with an empowered civil rights division of the Department of Justice; and increased support for minority-owned businesses, including pledging 25% of federal contracts to go to minority- and women-owned firms.

He also seemed to lay out a dollars-and-cents case for reparations.

"And it is also true of a dollar stolen. Every dollar plundered 150 years ago costs the descendants of the victim $1,000 today. Each year we do not act, the bill grows greater and the cost cuts deeper. Which, contrary to what some believe, means that the fact that some of this theft came a very long time ago does not make it better; it makes it worse. The policies that created these inequities were put in place intentionally, and we need intentional action to reverse these harms — bold and meaningful action that addresses not only the question of safety but also the question of prosperity, knowing that the two cannot be separated one from another."

But he stopped short of endorsing cutting a check when talking to reporters afterward. He said he was in favor of a House resolution to study and develop reparations proposals and that more could be done without it, too.

"I think we need HR40 to look at reparations," Buttigieg said, "but that spirit is also something we can act on right away, even before a commission gets up and running, in housing, in health, and entrepreneurship; in education, in criminal justice, and of course in access to the vote, in a democracy. I've written an op-ed recently about it, and we'll be putting out more specific detail about some of the things I mentioned just now and some other areas where I think specific, concrete, intentional action will make all the difference."

Buttigieg previously has said, "I've never seen a specific, workable proposal. But what I do think is convincing is the idea that we have to be intentional about addressing or reversing harms and inequities that didn't just happen on their own. The cleanest way I can think of to do it are through policies."