Accessibility links
Nike Pulls Shoes Featuring Betsy Ross Flag Over Concerns About Racist Symbolism The design — featuring the Betsy Ross flag with 13 stars for the original 13 colonies — drew complaints that it celebrates an era when slavery was legal and commonplace in the U.S. 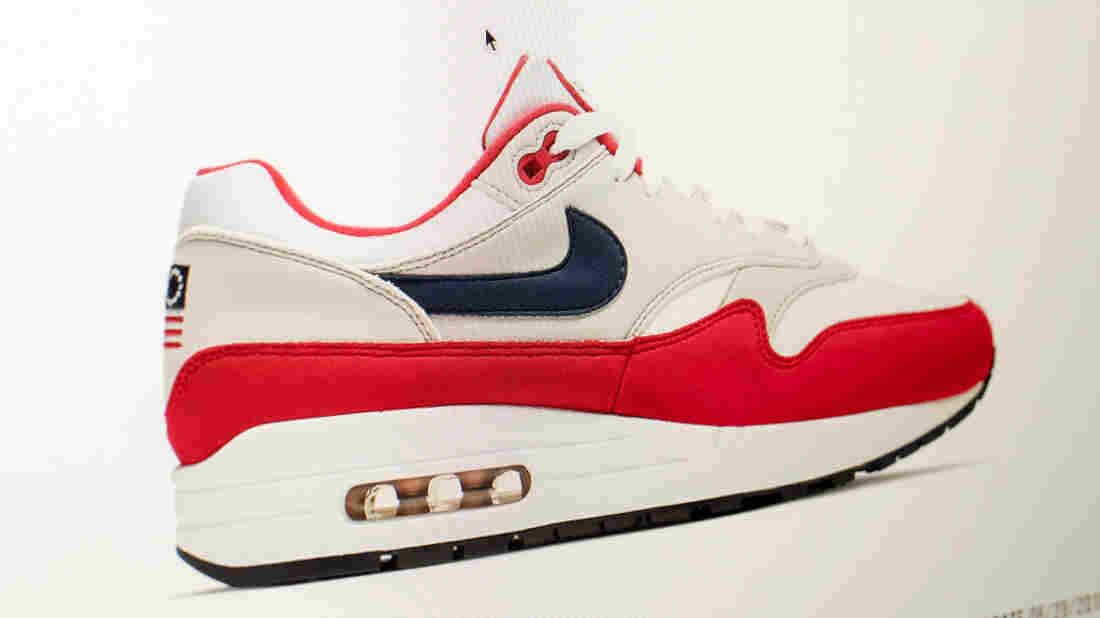 Nike ordered a recall of its new July Fourth-themed Air Max 1 sneakers over concerns about its Betsy Ross flag logo. Prices for the shoes rocketed on the website StockX, as seen on a computer screen Tuesday. Lucas Jackson/Reuters hide caption 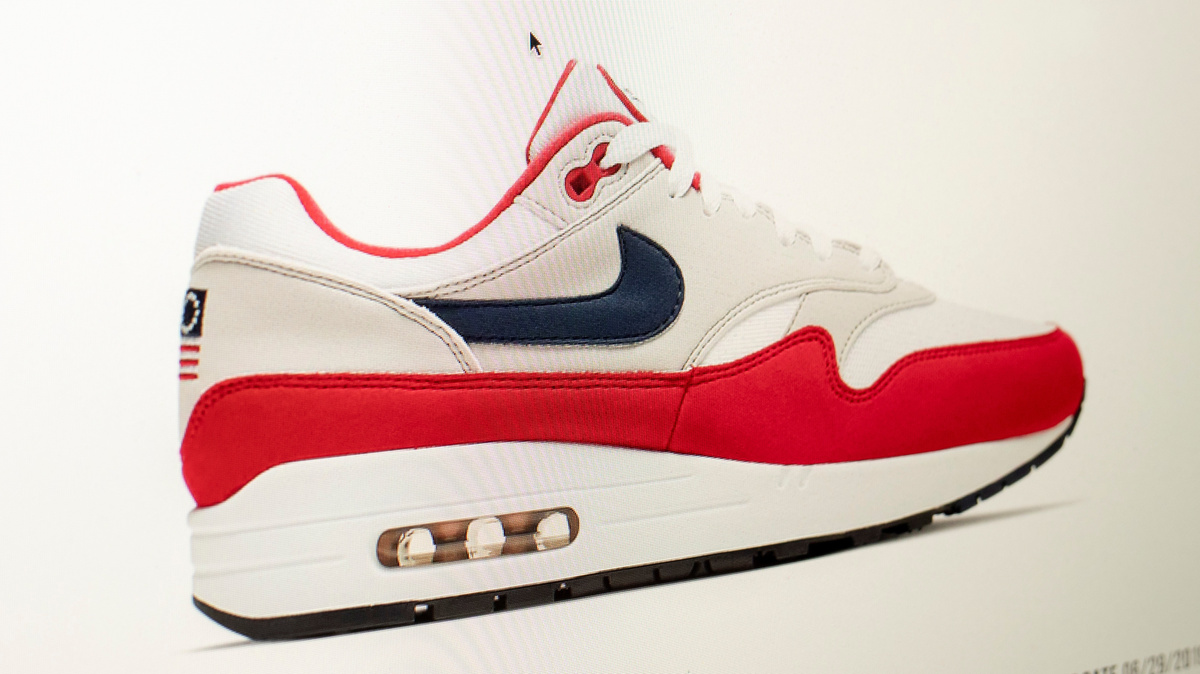 Nike ordered a recall of its new July Fourth-themed Air Max 1 sneakers over concerns about its Betsy Ross flag logo. Prices for the shoes rocketed on the website StockX, as seen on a computer screen Tuesday.

Nike has recalled a shoe featuring the Betsy Ross flag over concerns that the design glorifies slavery and racism. The red, white and blue sneaker had been set to hit the U.S. market to commemorate the July Fourth holiday.

"Nike has chosen not to release the Air Max 1 Quick Strike Fourth of July, as it featured an old version of the American flag," the company told NPR on Tuesday. Nike did not immediately respond to questions about the thinking behind the original design.

It released a statement saying, "We regularly make business decisions to withdraw initiatives, products and services. NIKE made the decision to halt distribution [of the shoe] based on concerns that it could unintentionally offend and detract from the nation's patriotic holiday."

The special Air Max 1 design — which includes an embroidery of the famous flag featuring 13 stars for the original 13 colonies — drew complaints that it celebrates an era in U.S. history when slavery was legal and commonplace. While the flag's defenders say it has a place in history, critics say it has become a symbol of extreme views.

Update: release is indefinitely postponed. Retailers are being asked to return the shoes to Nike. Celebrate the upcoming #IndependenceDay holiday with these Air Max 1s featuring the flag sewn by Betsy Ross. For a closer look at this upcoming release, tap the link in our bio.

Those critical of the Nike shoe include activist and former NFL quarterback Colin Kaepernick, according to The Wall Street Journal. The newspaper says Kaepernick asked Nike to reconsider the design out of concern that it would send the wrong message about race in the modern United States.

Kaepernick has not commented publicly about the controversy; however, the Know Your Rights campaign, founded by Kaepernick, retweeted several messages about Nike's decision, including one that used the Twitter hashtag #ImWithKap — echoing the protests that made Kaepernick famous.

Nike's prerelease images of the shoe sparked commentary and debate last week. "I wasn't free yet," read one comment on Sneaker News' Instagram post about the shoe. Other responses called them "Air Slavery." Some commenters said they view the symbol as evoking the American Revolution, nothing more.

Nike's sudden decision to withdraw the shoes drew an even bigger response.

"It's a good thing Nike only wants to sell sneakers to people who hate the American flag," Sen. Ted Cruz, R-Texas, wrote in response to the Journal article on Kaepernick's role in the decision.

It’s a good thing @Nike only wants to sell sneakers to people who hate the American flag.... @NFL #HappyFourth https://t.co/G6w8vDjvLP

By the time Nike decided to pull the shoes, the company had already shipped the sneakers to retailers to meet a July 1 release date. The controversy instantly sent the shoe into collectible territory. While the original suggested retail price was $140, the sneaker at one point was selling for around $2,500 on the clothing site StockX on Tuesday morning.

As the sneaker magazine Sole Collector notes, the shoes had been pulled from Nike's new launch site as of June 26, shortly after the first images were released. But at the time, a company representative suggested they would still be available at shoe stores.

Nike's about-face drew a sharp rebuke from Arizona Gov. Doug Ducey, who announced that his state will no longer offer tax incentives to Nike to try to lure the company to invest in an operation in Goodyear, Ariz.

"We don't need to suck up to companies that consciously denigrate our nation's history," the Republican governor said in a series of tweets.

Nike has made its decision, and now we’re making ours. I’ve ordered the Arizona Commerce Authority to withdraw all financial incentive dollars under their discretion that the State was providing for the company to locate here. 7/

The historic flag's basic design was codified in June 1777, when the Continental Congress adopted a resolution calling for a national flag comprising 13 stripes and 13 stars, "white in a blue field, representing a new constellation."

In recent years, right-wing and extremist groups have attempted to adopt the Betsy Ross flag. In 2016, supporters of then-candidate Donald Trump displayed it alongside "Make America Great Again" banners at a high school football game, leading a Michigan school superintendent to apologize to anyone who was offended. The official called the flag a symbol of "exclusion and hate."

Nike & Kaepernick are correct in not wanting a shoe design that has been coopted by anti-Black racists. That particular design is now associated with the white supremacist gang III%. Here is III% in Charlottesville with white supremacist Michael Ramos who was charge with assault pic.twitter.com/1NVA76XFRg

Despite the flag's name, Betsy Ross' role in designing and creating the revolution-era flag "is largely fictitious," according to the U.S. National Archives.

Explaining how Ross came to be credited with making the flag, the National Archives explains: "It is likely that her grandson, William J. Canby, developed the story in the 1870s and that her only connection to the American flag was as a Philadelphia flag maker who sewed flags and banners for the United States military."

But in paintings and as a matter of legend, Ross is credited with making the flag in 1776 as the United States was fighting to break away from the British Empire. A 1917 book that examined how Ross became interwoven with the story of the flag calls the standard "our beautiful emblem of liberty."