Accessibility links
OPEC Formally Embraces Russia, Other Non-Members In Expanded "OPEC+" The Saudi-led oil cartel used to shift world oil markets on its own. These days, it needs help from a few key partners — and OPEC is now officially recognizing its new alliances. 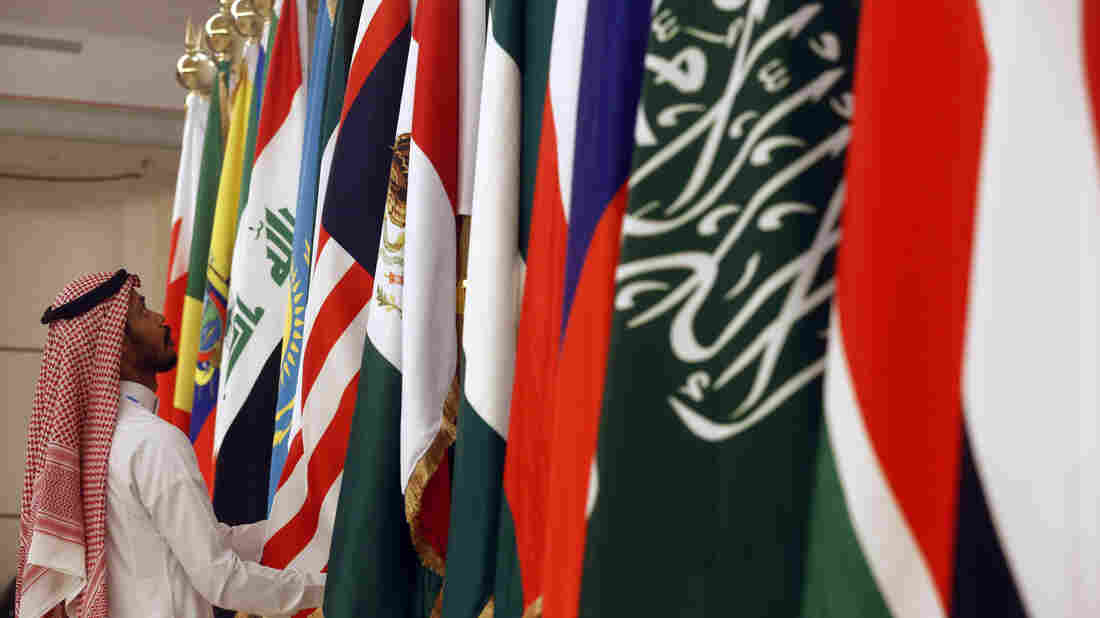 A Saudi worker adjusts flags of participating countries before a meeting of energy ministers from OPEC and its allies in Jeddah, Saudi Arabia, on May 19. OPEC+ countries met again in Vienna on Monday and Tuesday and agreed to formalize their relationship in a "Charter of Cooperation." Amr Nabil/AP hide caption 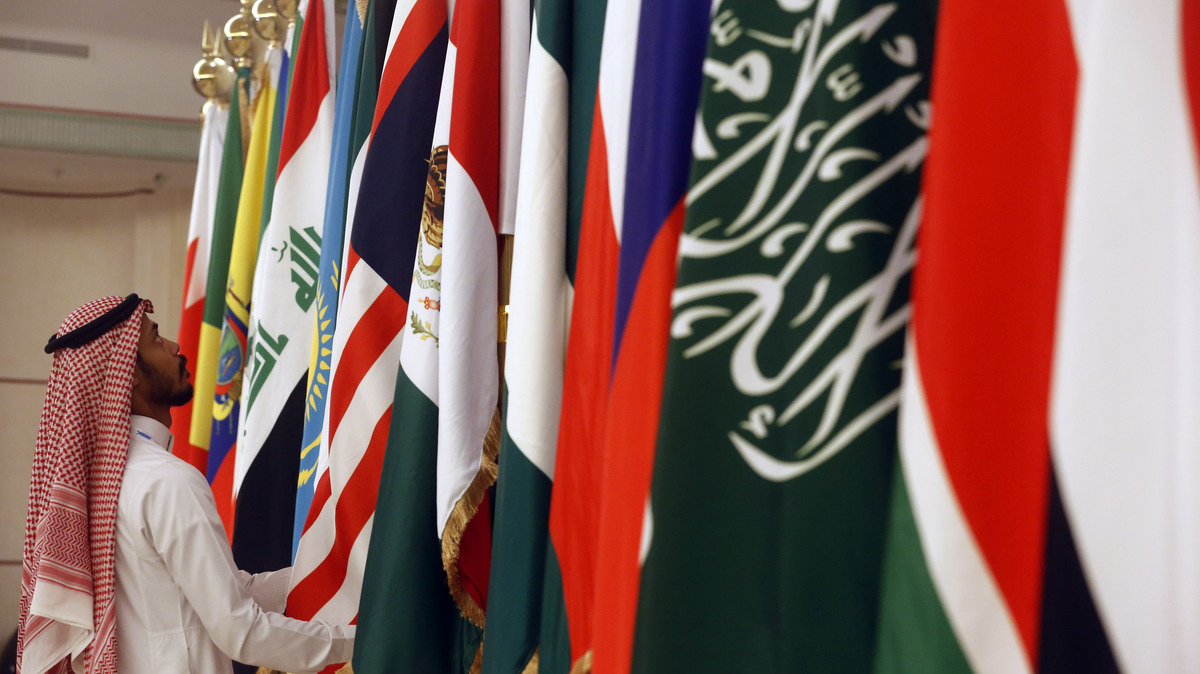 A Saudi worker adjusts flags of participating countries before a meeting of energy ministers from OPEC and its allies in Jeddah, Saudi Arabia, on May 19. OPEC+ countries met again in Vienna on Monday and Tuesday and agreed to formalize their relationship in a "Charter of Cooperation."

OPEC used to shift world oil markets with a single announcement. These days, the Saudi-led organization needs help from some key partners — most significantly Russia — to exert that kind of influence.

The expanded alliance, which also includes Kazakhstan, Mexico and other nations, is known as "OPEC+." And on Monday and Tuesday, OPEC+ made its unofficial expansion a little more official.

Member and non-member states have agreed on a "Charter of Cooperation" to formalize their relationship, pending approval from individual governments.

The charter "has created one of history's strongest producer partnerships, spanning the entire world from east to west," he said Tuesday. "Our objectives related to market stability are now matched by the horsepower needed to deliver them."

For many decades, OPEC had that horsepower all on its own: its members controlled a majority of the world's crude supply.

But the balance of power in the global oil market has changed. A technological revolution unlocked vast quantities of previously tough-to-access crude. The U.S. unexpectedly became the world's No. 1 oil producer and a significant exporter. OPEC found itself controlling less than half the world's crude, and watched as oil prices dropped.

So Saudi Arabia looked to a country that, until just a few years ago, had never cooperated with OPEC cuts and was regarded by key OPEC members as an oil rival instead of an ally: Russia. After the U.S. and Saudi Arabia, Russia is the world's third-largest oil producer.

"There is no question that OPEC's need to reach out to other large producers like Russia was a direct result of the fact that they were losing their power and influence over the oil market because of the rise in U.S. production and U.S. exports," says Amy Myers Jaffe, the director of the program on energy security and climate change at the Council on Foreign Relations. "Russia and OPEC decided that they would have to form a partnership or they would lose their influence completely."

Fortified by Moscow and other cooperating non-members, OPEC+ once again controls most of the world's crude oil supply. In late 2016, the group agreed on production cuts that are credited with helping stabilize oil prices after their two-year slide. They've been extended repeatedly since then.

Building this partnership has not been easy. Iran, a founding member of OPEC, has always been wary of the power its regional rival Saudi Arabia wields within the group, and the new OPEC+ arrangement — which pivots on the partnership between Riyadh and Moscow — gives even more authority to the Saudis.

Meanwhile, Iran also has reason to be worried that the Saudi-Russia partnership could threaten the existing strategic military alliances between Iran and Russia, explains Jaffe.

"Iran is pretty isolated," she says. "If ... Russia feels there's some benefit to itself from having a tight relationship with Saudi Arabia, then who does Iran go to for any assistance?"

As a result, while Iran has accepted the OPEC+ production cuts, it has spoken out against formalizing the expanded coalition — that is, it accepted the functional reality of the partnership but objected to putting it down in writing. Ahead of the OPEC meeting on Monday, Iran vowed to veto the plans for the charter of cooperation.

Oil minister Bijan Zangeneh went so far as to say that "OPEC might die" as a result of domination by Saudi Arabia and Russia.

But after marathon negotiations on Monday, Iran was persuaded to sign off on the draft text of the charter, which was approved by the participating non-member states on Tuesday.

OPEC+ members welcomed the charter as a tool for strengthening producers' influence over the oil market.

However, Jaffe notes that even bolstered by the expansion, OPEC+ may not have the ability to move the price of oil as significantly as in the past. Many OPEC members are struggling with involuntary production cuts — from Venezuela's collapse to U.S. sanctions on Iran. Meanwhile, the U.S. and other non-OPEC producers can ramp up production very quickly, thanks to new drilling technologies.

And if OPEC does push succeed in pushing prices up significantly, Jaffe says, it could backfire — from an oil producer's standpoint — by pushing the world to more quickly reduce its demand for oil.

"If the price of oil were to go up today ... more and more people would be inclined to buy an electric car," she says. "There are all kinds of features today with new technology that make it actually very dangerous to OPEC's long-term interest to really jack around the price of oil."