Accessibility links
In Libya, Airstrike On Migrant Detention Center Kills At Least 44 The U.N. says the strike hit a hangar within the Tajoura Detention Center, obliterating what had been a shelter that was housing roughly 120 people. 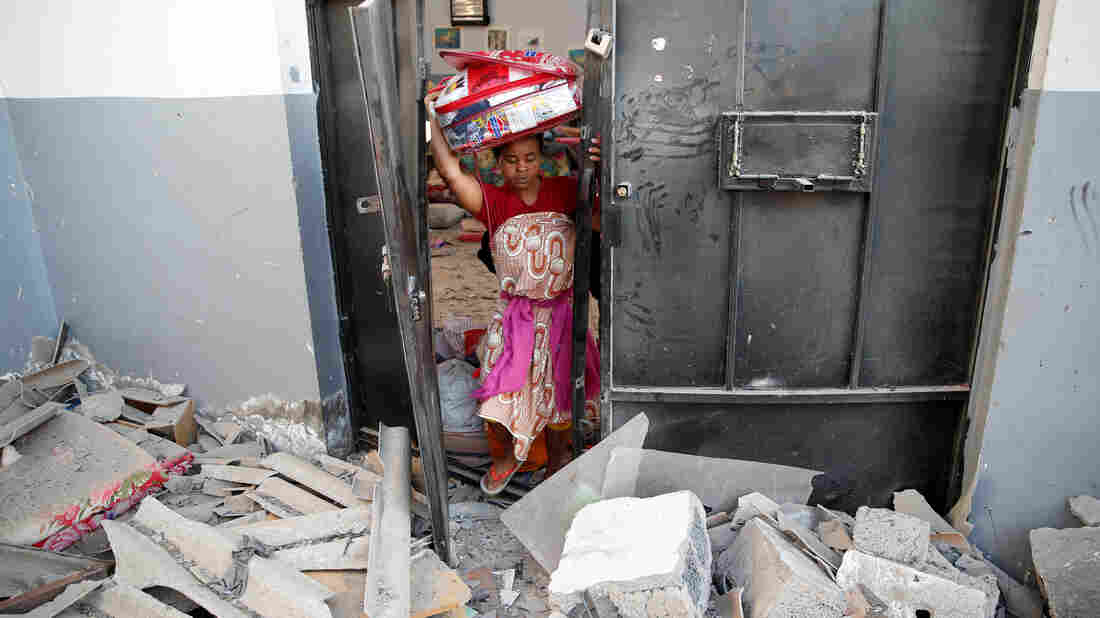 A woman picks up her belongings from among the rubble Wednesday, after an airstrike hit a detention center for mainly African migrants in the Tajoura suburb of Tripoli. Ismail Zetouni/Reuters hide caption 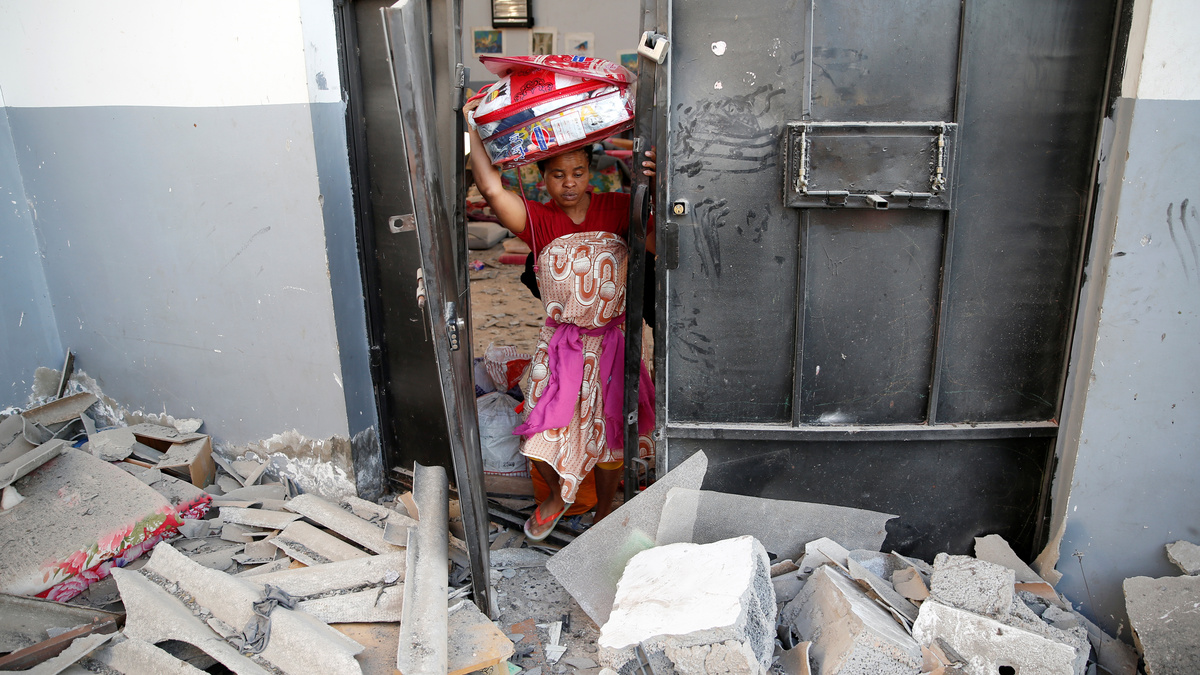 A woman picks up her belongings from among the rubble Wednesday, after an airstrike hit a detention center for mainly African migrants in the Tajoura suburb of Tripoli.

An airstrike on a migrant detention center in the Tajoura suburb of Libya's capital killed at least 44 people early Wednesday morning, according to the United Nations. More than 100 people were injured.

The strike hit a hangar within the Tajoura Detention Center, obliterating what had been a shelter that was housing roughly 120 people. The death toll has grown as local health authorities report casualties.

The U.N.-recognized government in the capital, Tripoli, has accused strongman Khalifa Haftar and his Libyan National Army of carrying out the attack. As NPR's Jane Arraf reports, the migrants' hangar is next to a militia base. Haftar has denied involvement, blaming the strike on shelling by government forces.

Haftar's forces have been advancing on the capital since April. The strike comes two days after the general threatened a barrage of new bombings on his enemies, declaring that "traditional means" of war had been exhausted. 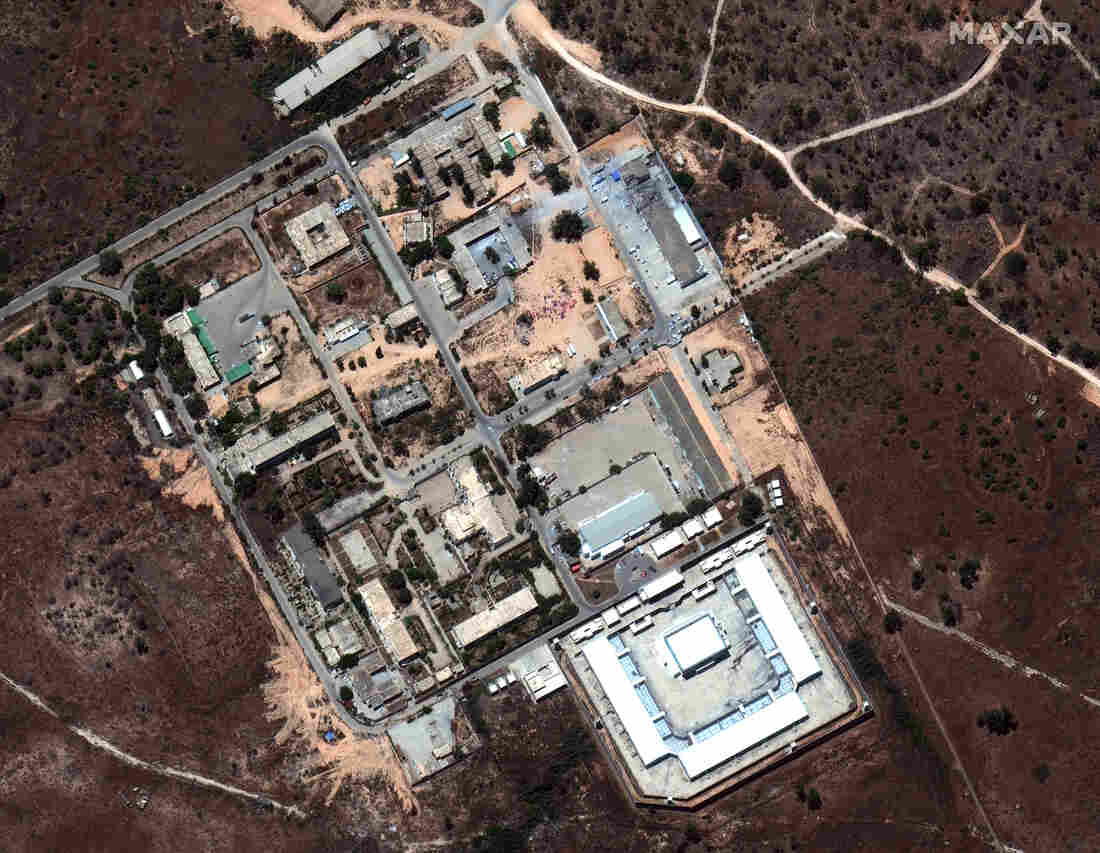 Satellite imagery of the Tajoura Detention Center after it was hit by airstrikes in Libya. Maxar Technologies hide caption 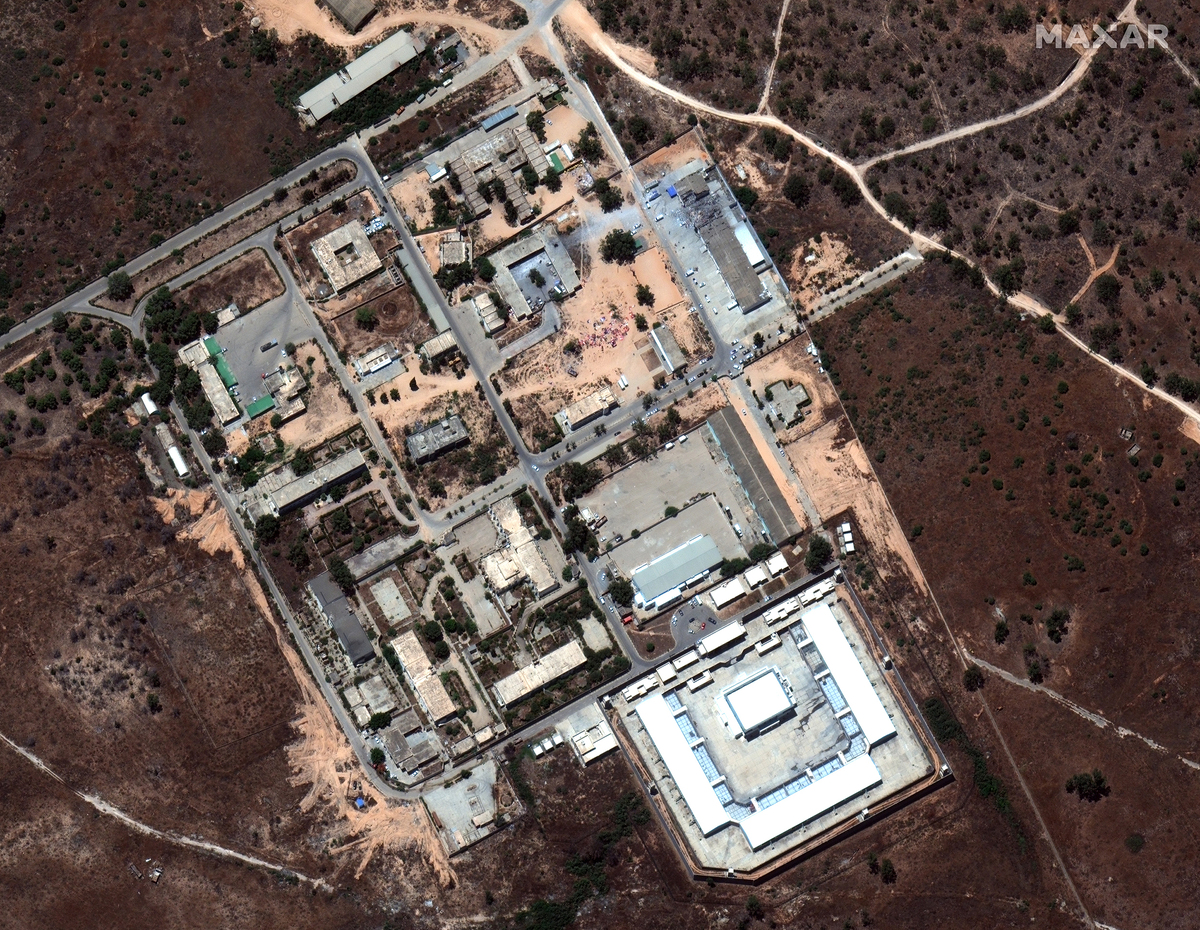 Satellite imagery of the Tajoura Detention Center after it was hit by airstrikes in Libya.

In videos posted online that are allegedly from the site of the attack, bodies are seen amid bloodstained rubble. The strike obliterated the structure of one hangar and collapsed parts of concrete walls and ceilings nearby. Another video posted by The Associated Press shows doctors scrambling to treat the wounded in a medical clinic.

The U.N. special envoy to Libya, Ghassan Salamé, issued a statement saying that the strike "clearly amounts to the level of a war crime," according to Reuters.

The U.S. State Department condemned the attack: "This tragic and needless loss of life, which impacted one of the most vulnerable populations, underscores the urgent need for all Libyan parties to de-escalate fighting in Tripoli and return to the political process, which is the only viable path to lasting peace and stability in Libya."

Most of the migrants and refugees who were at the center are from Africa. "Libya is seen as the gateway to Europe," Arraf says, "so they risk everything to get to Libya, and they try to get on boats to cross the Mediterranean to reach Europe. Most of them, these days, fail."

When the migrants' travels stall out in Libya, they're left in an unstable country locked in a violent war over its future. For several years, Haftar has been fighting to oust the U.N.-backed government led by Prime Minister Fayez al-Sarraj.

In a joint statement, the U.N. High Commissioner for Refugees and the International Organization for Migration said, "Our two organizations strongly condemn this and any attack on civilian life. We also call for an immediate end to detention of migrants and refugees. 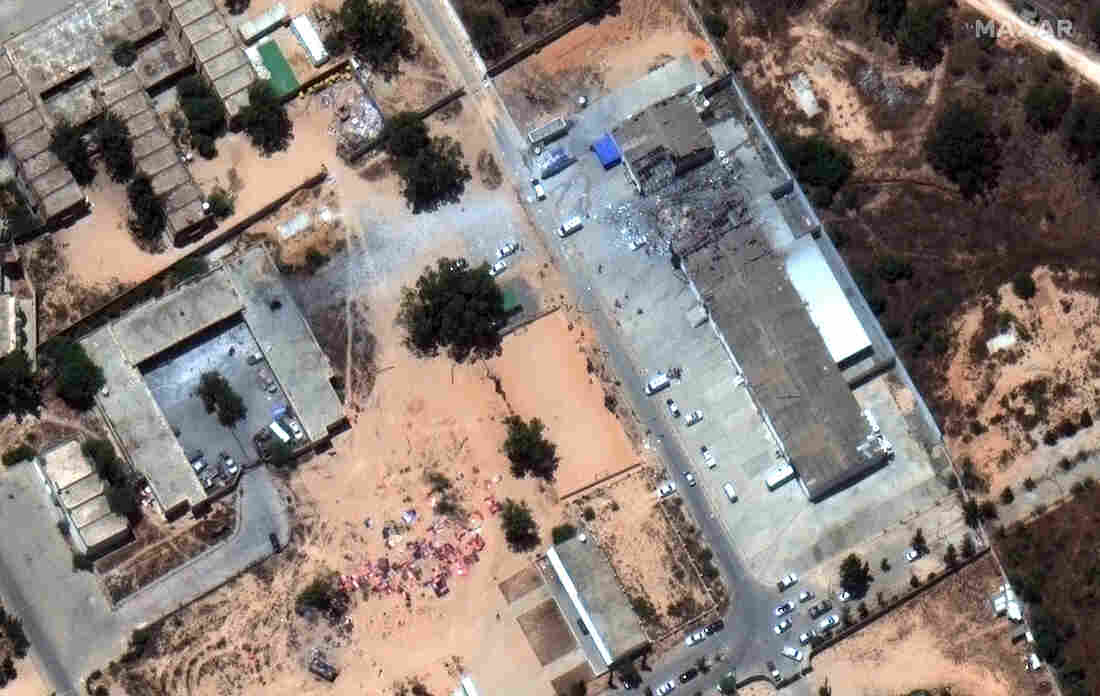 A closer view shows damage at the Tajoura Detention Center after airstrikes on Wednesday morning. At least 44 people were killed and more than 100 people were injured in the attack. Maxar Technologies hide caption 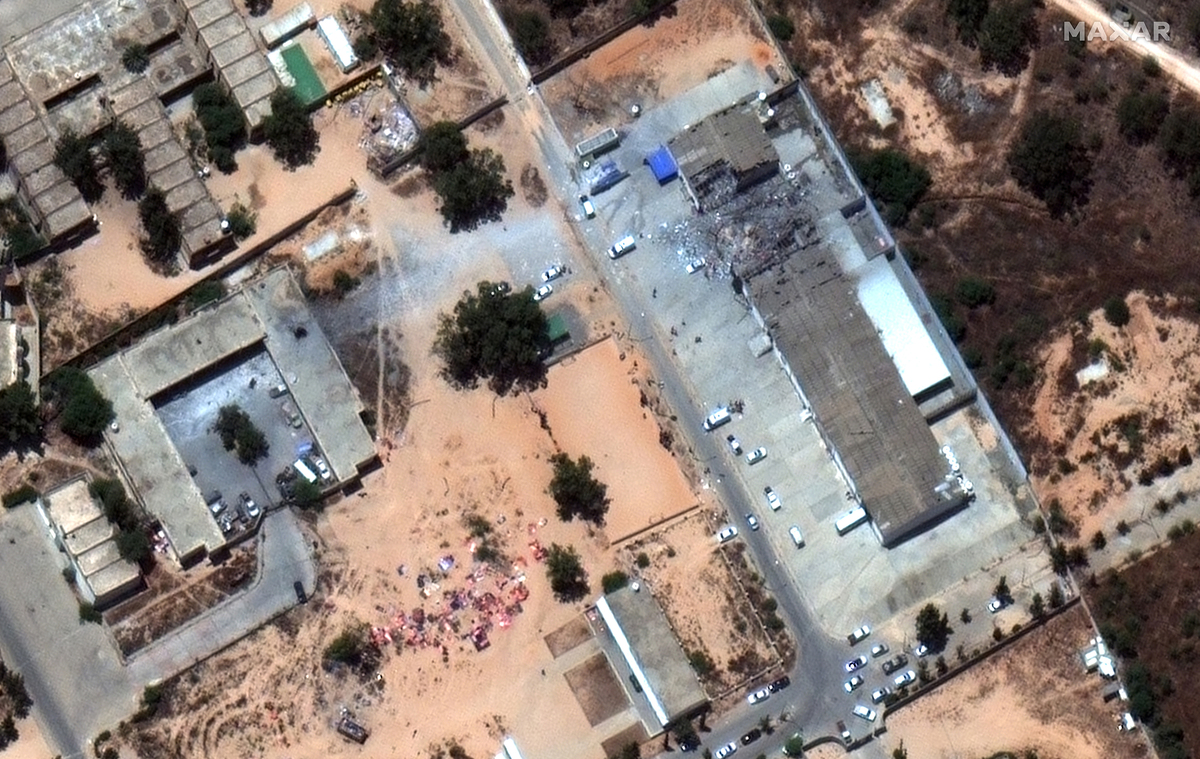 A closer view shows damage at the Tajoura Detention Center after airstrikes on Wednesday morning. At least 44 people were killed and more than 100 people were injured in the attack.

Noting that the Tajoura facility houses more than 600 men, women and children who are either migrants or refugees, the agencies said they expect the death toll to rise.

In Tripoli, authorities called for the U.N. support mission in Libya to investigate the attack.

"The Secretary-General calls for an independent investigation of the circumstances of this incident, to ensure that the perpetrators are brought to justice, noting that the United Nations had provided exact coordinates of the detention centre to the parties."

The fallout from the airstrike could weaken political support for Haftar, who has been backed by both Egypt and the United Arab Emirates, Arraf reports. The strike also highlights the migration crisis — and it puts renewed scrutiny on the European Union's response to that crisis.

When migrants' Europe-bound boats are stopped at sea, they're brought back to detention centers by the Libyan Coast Guard, which is being supported by the EU as it carries out the interceptions.

By working with Libya's government, the EU has tried to stem the flow of migrants and to disrupt human smuggling operations. But a Human Rights Watch report from earlier this year said the detention system had made things worse for migrants, exposing them to horrendous treatment and rights abuses.

"In reality, the externalization approach has the effect of avoiding the legal responsibilities that arise when migrants and asylum seekers reach EU territory by outsourcing migration control," Human Rights Watch said.

In response to the strike, Doctors Without Borders called for all refugees and migrants who are being held against their will in Libya to be evacuated elsewhere immediately, saying desperate people are being caught in the crossfire of war.

"Today, inaction and complacency has needlessly cost the lives of more vulnerable refugees and migrants," said Prince Alfani, the Libya medical coordinator for Doctors Without Borders, which is also known as Médecins Sans Frontières or MSF. He added, "The reality is that for every person evacuated or resettled this year, more than twice as many have been forcibly returned to Libya by the Libyan Coast Guard with support from the European Union."