Accessibility links
Edward Gallagher Sentenced For Taking Photo With Corpse Of ISIS Fighter Earlier Wednesday, President Trump congratulated Edward Gallagher and his family on the end of his legal ordeal. In response, they said, "Thank you Mr. President ... for all you have done." 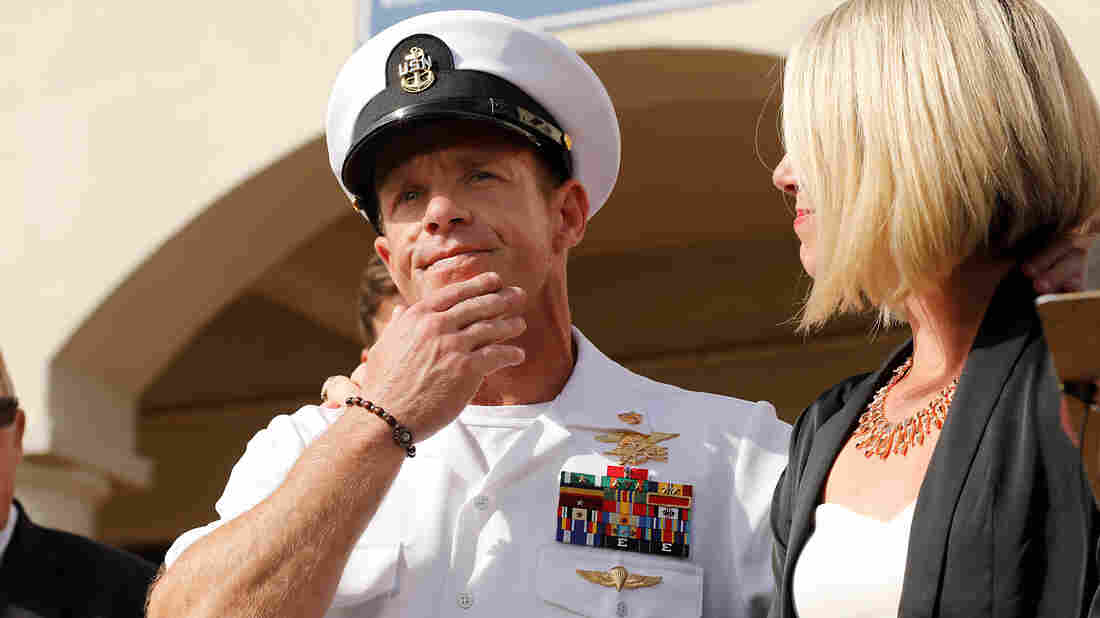 A jury sentenced Navy SEAL Special Operations Chief Edward Gallagher on Wednesday, one day after he was acquitted on the most serious charges he faced in connection with the death of a 17-year-old ISIS fighter in U.S. custody. John Gastaldo/Reuters hide caption 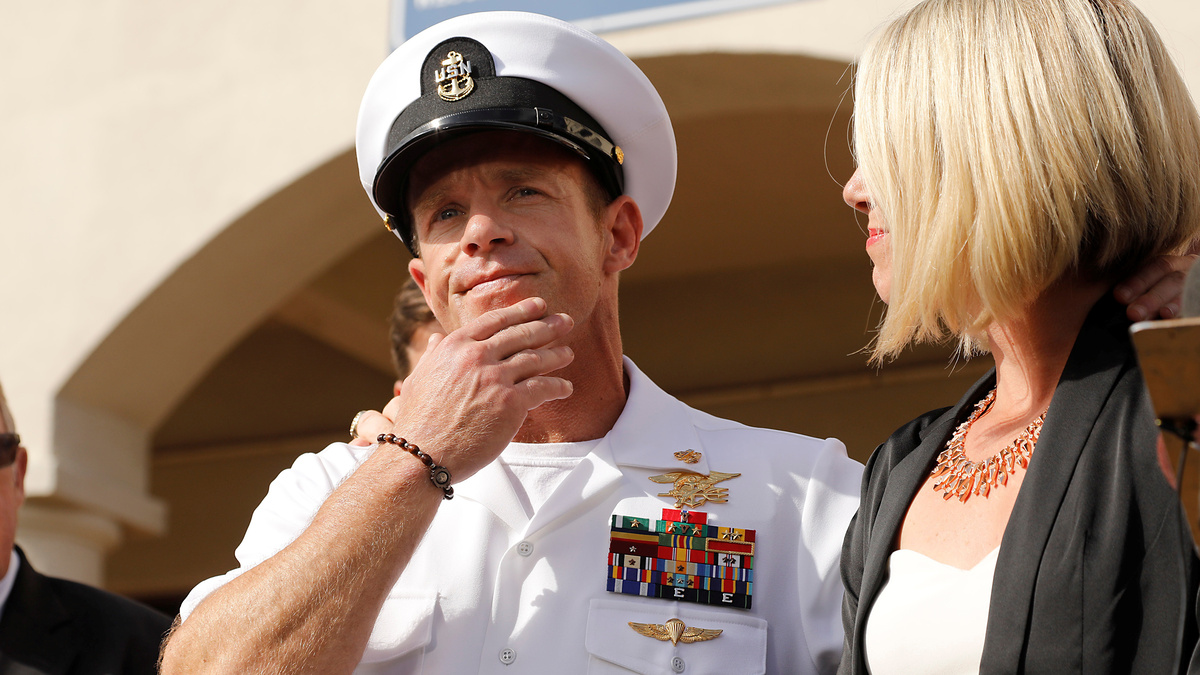 A jury sentenced Navy SEAL Special Operations Chief Edward Gallagher on Wednesday, one day after he was acquitted on the most serious charges he faced in connection with the death of a 17-year-old ISIS fighter in U.S. custody.

A military jury has sentenced Navy SEAL Special Operations Chief Edward Gallagher to a demotion and reduction in pay for posing with a dead prisoner's body on the battlefield. A jury convicted Gallagher of that crime on Tuesday but acquitted him of charges that he murdered the captive ISIS fighter.

The jury also sentenced Gallagher to four months' confinement — the maximum allowed — but he won't serve any additional time because he already spent 201 days confined to the brig while awaiting trial. The sentence also includes partial pay for four months, which was effectively reduced to two months because of time served.

Out of all the charges Gallagher faced, reporter Steve Walsh of member station KPBS said, posing with a prisoner's corpse "is the only charge that cannot be accompanied by a dishonorable discharge."

At Wednesday's sentencing hearing, Gallagher accepted responsibility for his actions, Walsh reported from the courtroom.

The prosecutor did not seek any additional confinement for Gallagher, instead asking for a demotion "from E7 down to E6," Walsh tweeted.

Although Gallagher avoided a prison sentence, his demotion will affect both his salary and his pension, after his service hits the 20-year mark.

Gallagher, 40, is a 19-year veteran and a Bronze Star recipient. When the incidents that were in question occurred in 2017, he was serving his eighth deployment.

Several hours before the sentence was announced, President Trump said via Twitter, "Congratulations to Navy Seal Eddie Gallagher, his wonderful wife Andrea, and his entire family. You have been through much together. Glad I could help!"

Congratulations to Navy Seal Eddie Gallagher, his wonderful wife Andrea, and his entire family. You have been through much together. Glad I could help!

A response shortly afterward appeared on the Gallaghers' website devoted to the case: "Thank you Mr. President @realdonaldtrump for all you have done for our family." It included a screenshot of the president's message and featured the hashtag #TRUMP2020.

Soon afterward, Gallagher and his wife, Andrea Gallagher, were seen entering a San Diego courtroom where his sentence would be decided.

Trump showed an interest in the case earlier this year when he posted a tweet saying that Gallagher would be released from restrictive custody "In honor of his past service to our Country."

The most serious charge in the case centered on a 17-year-old ISIS fighter who had been wounded and died in U.S. custody. Fellow SEALs testified that Gallagher stabbed the prisoner in the neck — but one of those witnesses drastically changed his story at trial, shocking the courtroom by saying that he, not Gallagher, actually killed the prisoner.

Special Warfare Operator 1st Class Corey Scott told the court that he blocked the prisoner's breathing tube and killed him as an act of mercy after Gallagher stabbed him.

Gallagher, a sniper and medic, had also been accused of shooting unarmed Iraqi civilians, including an elderly man and a school-age girl in Mosul. He was acquitted on those charges as well.

Prosecutors had urged the jury to convict Gallagher based in part on text messages he sent about the dead ISIS fighter, along with a photo of the corpse. In one message, he said, "Good story behind this. Got him with my hunting knife."

The SEAL's defense team said the photos were a normal part of the dark humor among service members. And they said junior members of Gallagher's platoon had turned against him because they didn't like his leadership style.

Gallagher's case has exposed rifts in the secretive SEAL community of special operators — a schism that the Navy Times highlighted in April when it laid out some of the details of the accusations against Gallagher.

Drawing on Naval Criminal Investigative Service files and legal records it had obtained, the Navy Times said some of the SEALs in Gallagher's unit wanted to block him from a promotion or a possible Silver Star honor. The news outlet cited NCIS interviews in which the SEALs reportedly said Gallagher had bragged about killing dozens or even hundreds of people on each of his deployments.

Witnesses have said Gallagher recited his reenlistment oath near the ISIS detainee's body. According to the Navy Times, a lead petty officer from the platoon told NCIS agents that he viewed the reenlistment ceremony as "the most disgraceful thing he had ever seen."

In another unusual twist in the case, the judge removed the lead prosecutor, Navy Cmdr. Christopher Czaplak, who admitted to sending a digital tracking device to defense attorneys and a Navy Times editor who was covering the case, in an attempt to trace leaks to the media.