Accessibility links
University Of Alaska Prepares For 41% Budget Slash Alaska Gov. Mike Dunleavy slashed $130 million, or 41%, from the budget of a university system that serves more than 26,000 students. Layoffs, elimination of programs and campus closures are likely. 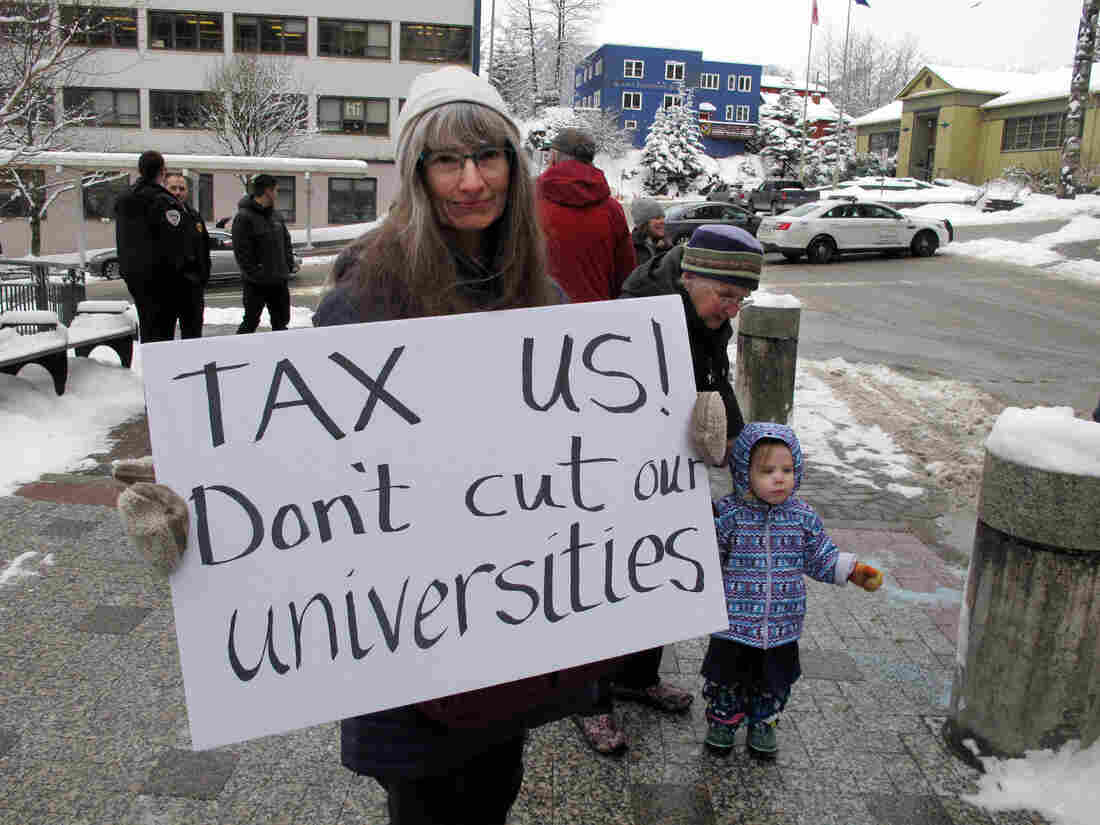 Luann McVey holds a sign before the start of a rally held in support of the Alaska university system on Feb. 13 in Juneau, Alaska. Becky Bohrer/AP hide caption 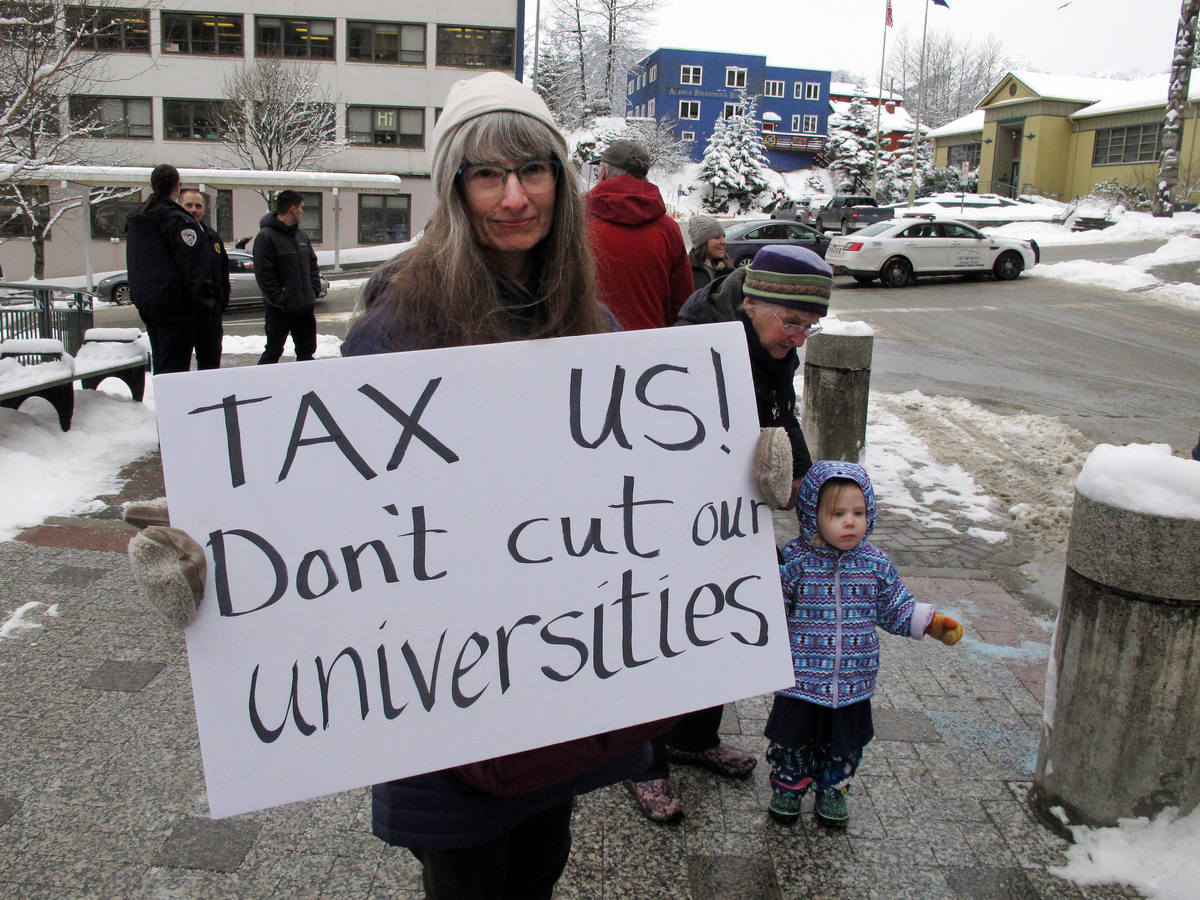 Luann McVey holds a sign before the start of a rally held in support of the Alaska university system on Feb. 13 in Juneau, Alaska.

The University of Alaska System is bracing for a 41% cut in funding it receives from the state, after Gov. Mike Dunleavy vetoed a $130 million line item in the state's budget.

The announcement came last Friday, three days before the fiscal year began on July 1. Dunleavy vetoed roughly $400 million in items in the budget, with education receiving the largest cut.

The university system will lose $130 million from the veto — on top of an additional $5 million previously agreed upon by legislators. The governor's 182 line-item cuts also included Medicaid, senior benefit payments and homelessness services.

University President James Johnsen says he was caught by surprise.

"I was pretty stunned. No question it was a grim day," Johnsen tells NPR's Mary Louise Kelly. "To get this huge reduction on top of all the cuts we've already taken is extremely challenging. ... There aren't any nickels and dimes laying on the floor anymore. It has to be – to borrow a medical term – amputation at this point."

That means faculty layoffs, furlough notices for 2,500 employees and a freeze on hiring and travel. Johnsen envisions having to close down one of the system's three universities — with main campuses in Fairbanks, Anchorage and Juneau — and all of its 13 community campuses. The university system serves more than 26,600 students.

"We can't possibly serve the entire state, especially a state as geographically distributed as we are, by closing entire campuses," Johnsen says.

The governor campaigned on a promise to close the deficit of $1.6 billion and increase Alaska's Permanent Fund dividend, a share of the state's oil industry revenue that every Alaskan receives annually, to $3,000.

"We can't kick the can down the road, because we're running out of road," Dunleavy said at a press conference on June 28.

Johnsen disagrees, likening the cuts to dismemberment and asking for the cuts to be reversed.

"I'm not arguing against the [Permanent Fund] dividend necessarily, but if we didn't have it we would actually have a budget surplus this year," Johnsen says. "But given that 37% of the state's budget is proposed to go to $3,000 checks to every Alaskan – that's what creates this this fiscal challenge."

The university has mounted an advocacy campaign to reverse the cuts, but that seems unlikely with Republicans enjoying a strong presence in both chambers of Alaska's legislature.

If the campaign fails to gain a three-quarters majority to overturn the budget cut, Johnsen will be forced to consider financial exigency, which will allow him to eliminate academic programs and campuses or lay off tenured faculty quickly.

"A cut of this measure is unprecedented and devastating, and now is the time for advocacy," University of Alaska Anchorage Chancellor Cathy Sandeen said in a statement to NPR. "If it stands, we anticipate 700 layoffs, the elimination of 40 programs and a drop in enrollment of approximately 3,000. We're focused on creating enough momentum to embolden the Legislature to override the governor's vetoes."

Critics of the budget cuts worry that a poorly funded university will harm students, limit climate change research and create a brain drain from the state.

I am heartbroken. This should concern everyone in higher ed, who cares about climate change research in the US, or who has ever been inspired by the breathtaking everythingness of Alaska. This will cause a rapid, massive brain drain from the state, w/ devastating consequences pic.twitter.com/Op1LZV1X1z

Patrick M. Anderson, chief executive of the Rural Alaska Community Action Program, argues that the cuts will have a significant impact on his organization's ability to serve rural Alaskans, especially in areas such as research into suicide in rural Alaska, maintaining Alaska Native arts and training health care employees.

"Any reduction in the capabilities of UA to address Alaska's unique health issues will also be devastating," he wrote in a statement to NPR. "We have many needs that are not being addressed, and the removal of existing programs and capacity make it more difficult to gain the knowledge we need to navigate a rapidly changing future."

Lawmakers will convene next week to decide if they want to override the vetoes. Johnsen is hoping they reconsider and spare the university system what he described in a letter to the UA community as an "institutional and reputational blow from which we may likely never recover."

"We're not perfect," Johnsen says. "We can be more cost effective and there are various other steps that we can take. But the idea that we would take them through a 41%-in-one-year reduction is really severe."

In the audio, as in a previous Web version of this report, we mistakenly say that the Alaska university system is facing a more than 40% cut in its budget. In fact, that cut is only in the state's portion of funding for the system.