Accessibility links
'I Want To Get The Hell Out Of Here': Thousands Of Palestinians Are Leaving Gaza Tens of thousands of Palestinians have left Gaza in the past year, as conditions there have worsened. 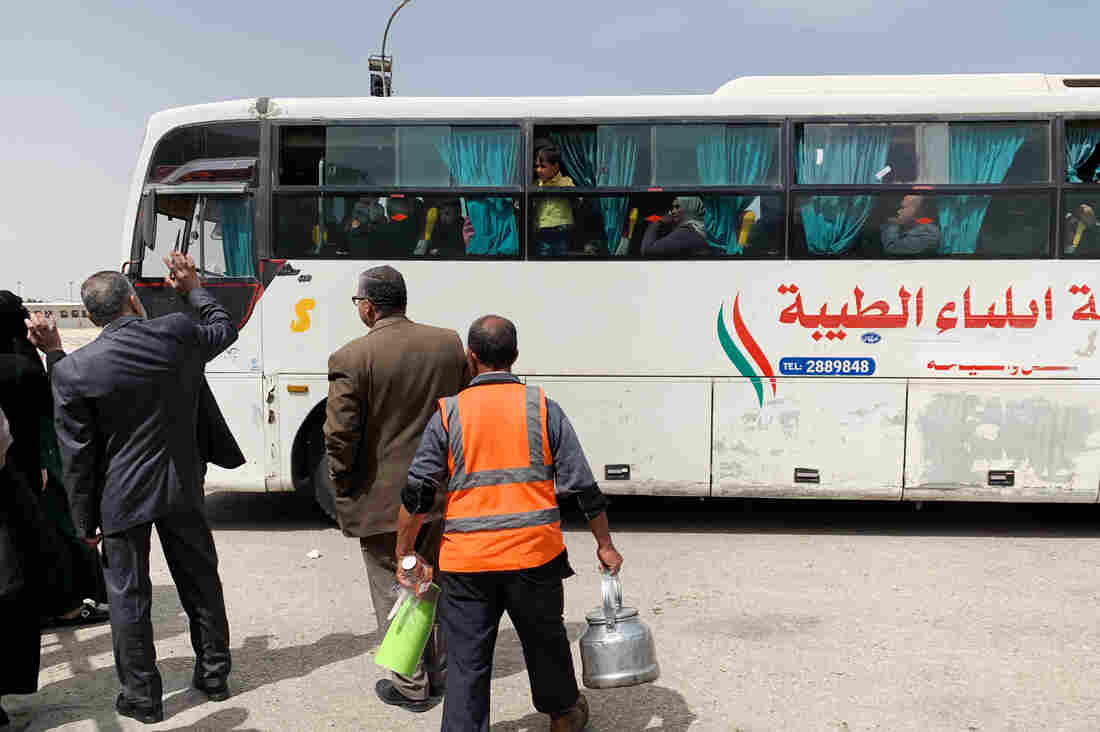 Palestinians wave goodbye to people aboard a bus before it leaves to cross into Egypt. As conditions at home worsen, thousands of Gazans have crossed the Egyptian border since May 2018, seeking a better life. Daniel Estrin/NPR hide caption 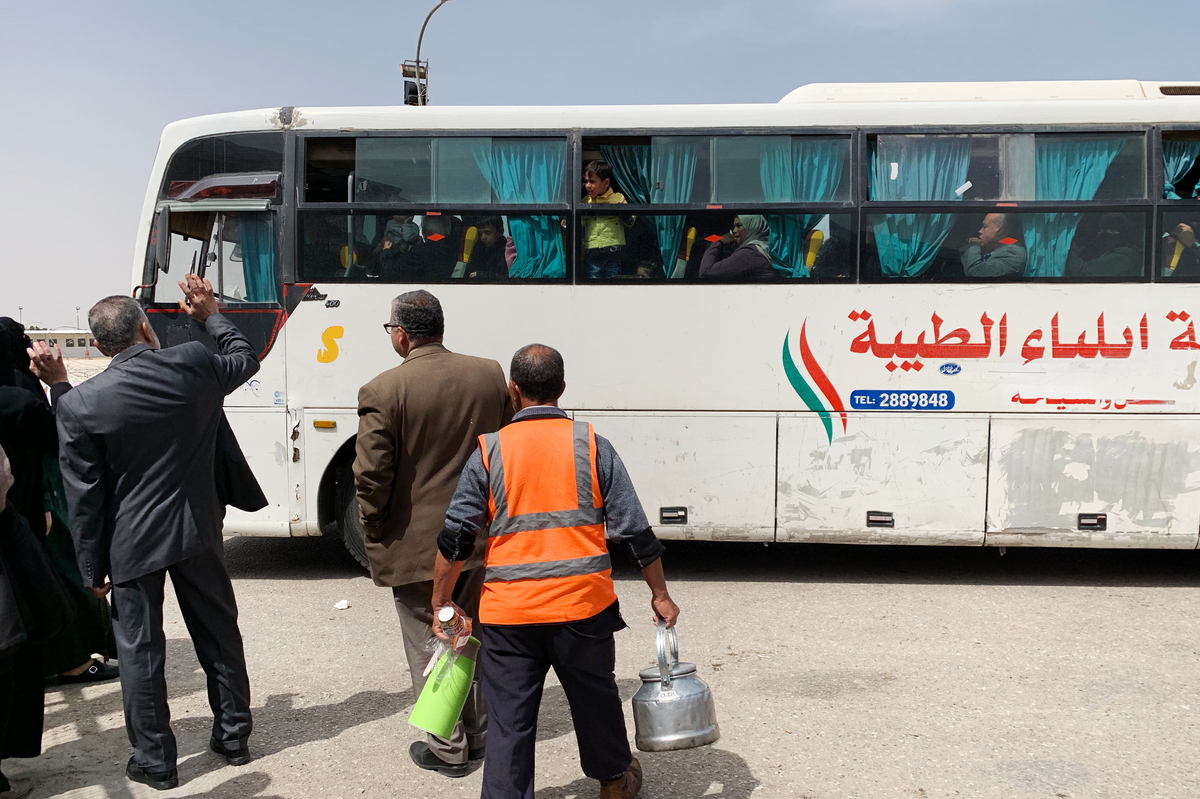 Palestinians wave goodbye to people aboard a bus before it leaves to cross into Egypt. As conditions at home worsen, thousands of Gazans have crossed the Egyptian border since May 2018, seeking a better life.

For over a decade, the Gaza Strip — controlled by the Islamist militant group Hamas, blockaded by its neighbors, difficult to leave — has amounted to an experiment in human isolation.

Now there is a new escape route. Egypt suddenly opened its border with Gaza in May 2018, and, facing increasingly unbearable living conditions, tens of thousands of Gazans are believed to have crossed that border and scattered across the world, in the latest chapter in a mass exodus of migrants out of the troubled Middle East.

"I didn't find my future here," says Zeid al Kurdi, 25, at the Gaza-Egypt border with just a backpack and small rolling suitcase.

He grew up in a refugee camp and, like most Gazans, relied on United Nations food rations. His family's house was destroyed in an Israeli airstrike in 2008, during the first of three wars that Hamas and Israel have fought, and his father went broke paying off a loan to rebuild it.

U.S. Aid Agency Is Preparing To Lay Off Most Local Staff For Palestinian Projects

Kurdi had a plan: He went to university, earned a bachelor's degree in English and French, and was sure his language skills would land him a job with an international aid organization working in Gaza. But some aid groups have scaled back their activities in Gaza. The U.S. recently cut all aid money to Gaza and donor countries are spread thin, aiding other Mideast hot spots. He couldn't find work.

Kurdi tried to get a visa to the U.S. — "you know, the land of opportunity," he says — but his application was rejected. So his family collected enough money for him to fly from Cairo to Abu Dhabi to look for work. 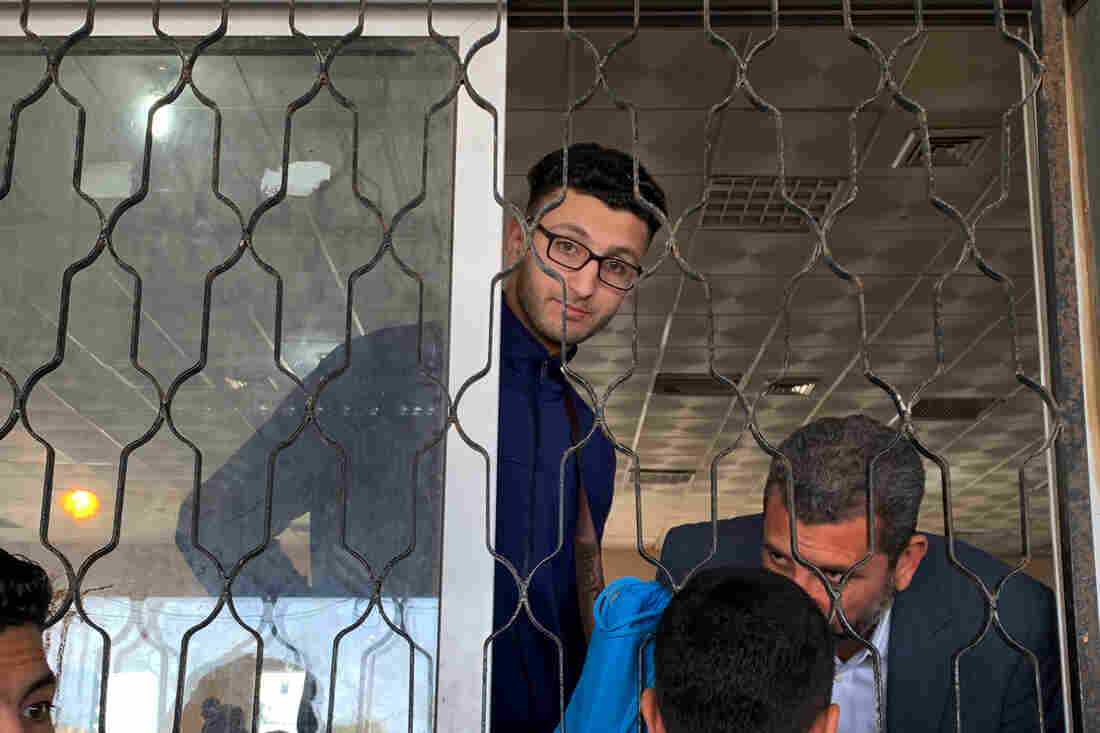 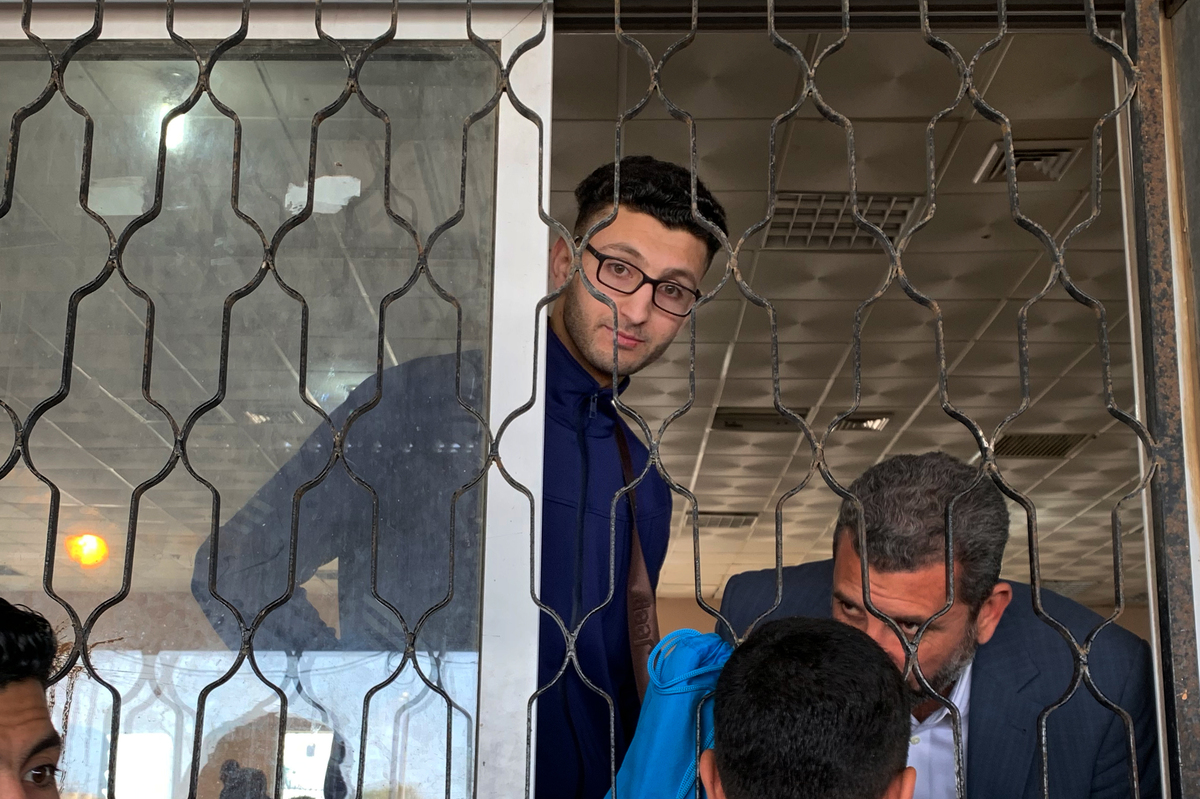 Zeid al Kurdi, 25, waits inside the Gaza border terminal to cross into Egypt.

"It's really bad for me to leave them," he says of his brothers, who came to the border to see him off, "and also really bad to leave my mother and father. But it is necessary to seek a better future."

Gaza is a core focus of the White House's new multibillion-dollar proposal to enhance the quality of life for Palestinians. But the U.S. says the proposal cannot be implemented without a political solution to the Israeli-Palestinian conflict. Youth like Kurdi cannot afford to wait.

He departed through Gaza's main portal to the world, a black iron gate on the Egyptian border.

In recent years, this gate has been open only a couple of days every few months, as Egypt and Israel imposed a blockade to contain Hamas and keep militants from getting out. Egypt tightened its border after the 2013 overthrow of the country's Islamist President Mohammed Morsi and as it battled militants near Gaza in the northern Sinai Peninsula.

In May 2018, the border gate was opened to "alleviate the burdens of the brothers in the Gaza Strip," as Egypt's President Abdel-Fattah el-Sissi tweeted. Days earlier, as the U.S. inaugurated its new embassy in Jerusalem, Israeli troops fatally shot 59 Palestinians and wounded more than 2,700 during protests and violence along the Israeli fence with Gaza.

The Egyptian border crossing has remained open, teeming with young men like Kurdi, waiting for Hamas authorities to call their names over a scratchy loudspeaker to board a bus and cross. Absent official emigration statistics, experts in Gaza estimate 35,000 to 40,000 Gazans have left since mid-2018.

"It's: 'Let me get out of Gaza and I'll figure it out,' " says Caitlin Procter, a Harvard University research fellow studying migration out of Gaza. "It speaks to the level of desperation."

Procter knows of more than 10 newlywed couples who are waiting to have children — bucking Gaza's conservative tradition — until they can leave Gaza and reach someplace where they can ensure their kids a better life.

Conditions have gone from bad to worse since Hamas took over Gaza in 2007. The group refuses to recognize Israel, which considers it a terrorist group and blockades Gaza. 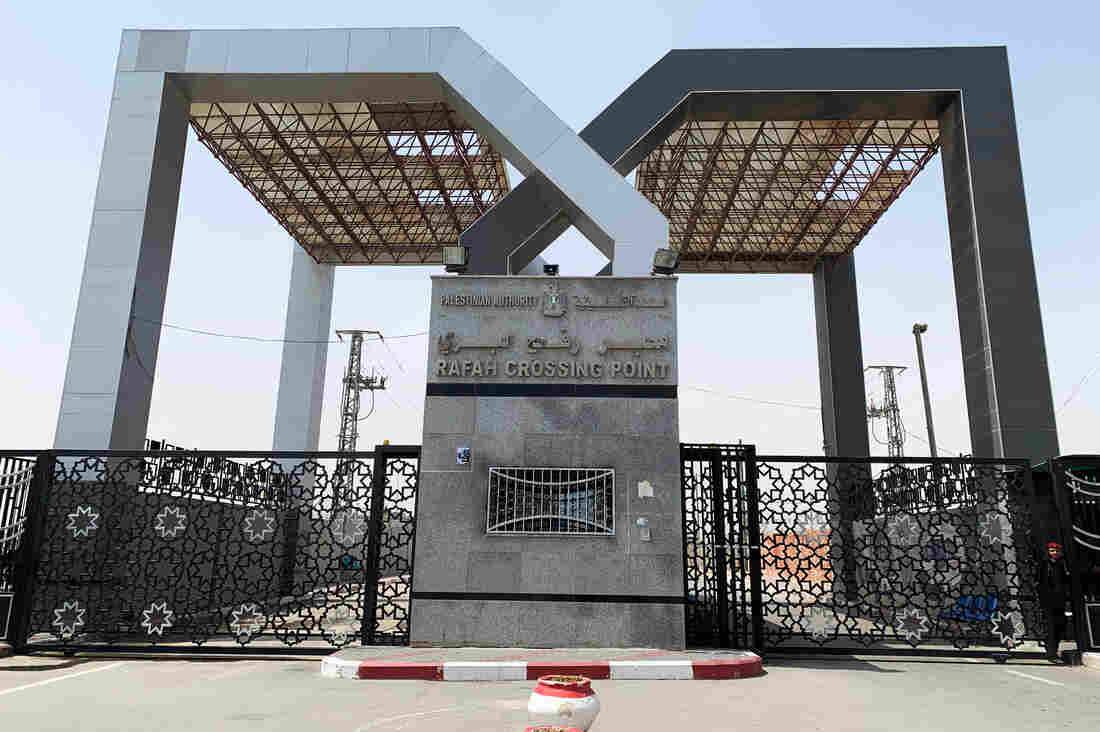 The Rafah gate on the Gaza-Egypt border, mostly closed in recent years, was opened in May 2018. Egypt and Israel have imposed a blockade to contain Hamas and keep militants out. Daniel Estrin/NPR hide caption 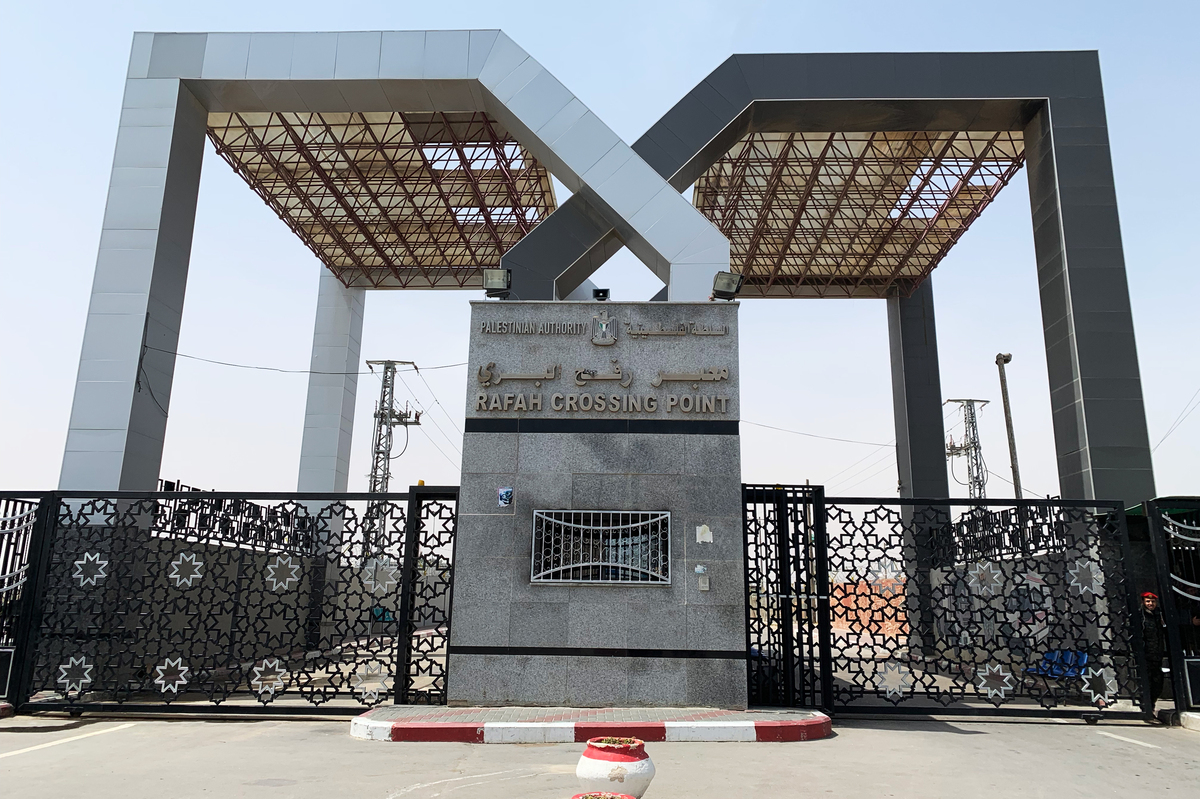 The Rafah gate on the Gaza-Egypt border, mostly closed in recent years, was opened in May 2018. Egypt and Israel have imposed a blockade to contain Hamas and keep militants out.

More pressure comes from the Palestinian Authority, which has cut civil servants' salaries in Gaza in an effort to squeeze Hamas and regain control of the territory, exacerbating an already devastated economy. Two out of every three youth in Gaza are unemployed, according to the World Bank, while electricity is spotty and most tap water is unpotable.

So when Egypt opened its border gate, it was a window of opportunity.

Those who leave are mostly young Palestinian men in their 20s, many of them from poor families and refugee camps, says Gaza-based Al-Azhar University political science professor Mukhaimar Abu Sada, whose four nephews and son have moved abroad in the past year.

"Most of them are college graduates, poor, no jobs," says Abu Sada. "You cannot get married. You cannot rent a house. You cannot start a new life here."

Some fly to the Gulf. Others have family ties in Egypt and settle there, or fly to Turkey, where it's easy and relatively cheap to get a visa. Some take Turkish smuggling boats to Greece. Some have drowned along the way. Many make their way deeper into Europe; Belgium and Norway are popular destinations.

Hamas has arrested and interrogated critics and beaten protesters in Gaza, and Abu Sada says some Palestinians who make it to Europe seek asylum, claiming they faced harassment at home.

So far this year, Palestinians are the third-largest group after Afghans and Syrians to take the smuggling route across the Mediterranean Sea to Europe, the International Organization for Migration tells NPR. At least 1,046 Palestinians have taken the sea route so far this year, as did 1,433 Palestinians last year. As recently as 2015, more than 6,000 Palestinians took the same route, according to IOM figures.

Publicly, Hamas has stayed quiet about the migrant phenomenon. It sees the open Egyptian border as a sign of warming ties between Egypt and Gaza's Hamas rulers, as it seeks aid and a long-term truce arrangement with Israel and Egypt that would ease restrictions on Gaza.

"I don't deny that there are some who want to go out and leave," says Hamas official Ghazi Hamad. "We are struggling to ease the life of people ... every day, looking here and there, looking for options." 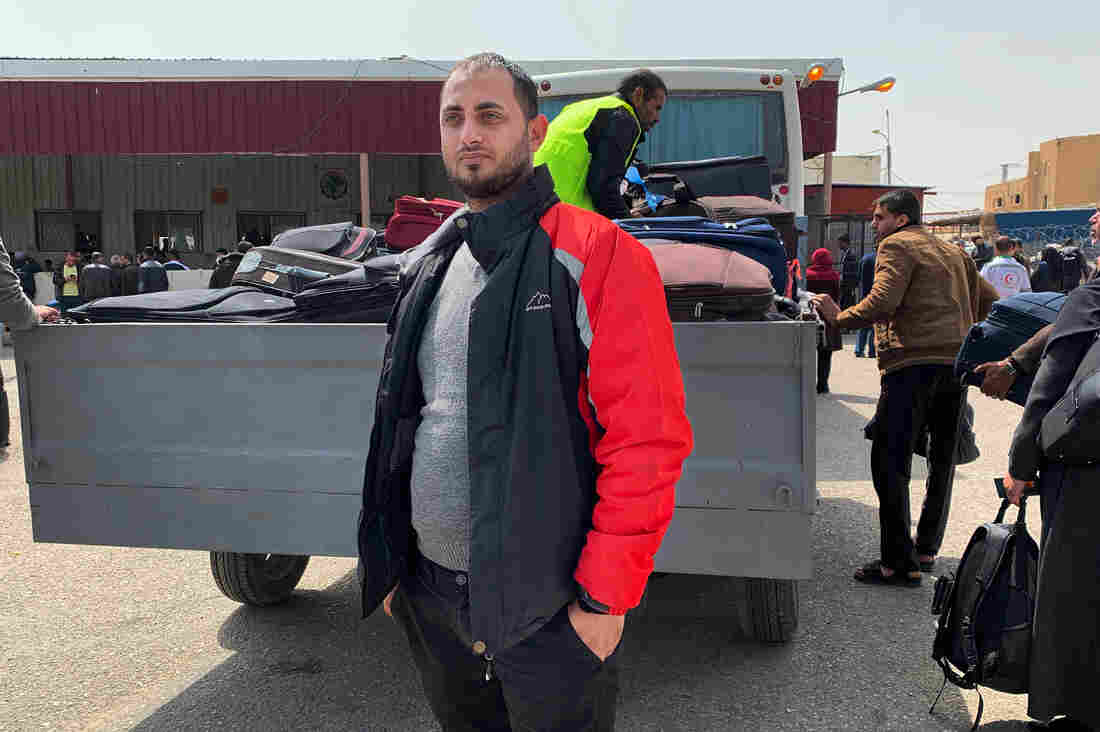 Khalil Abu Ibrahim left Gaza with his family last year, but had to return after struggling to earn a living in Europe. Now he provides a service assisting other young Palestinians as they apply for visas. Daniel Estrin/NPR hide caption 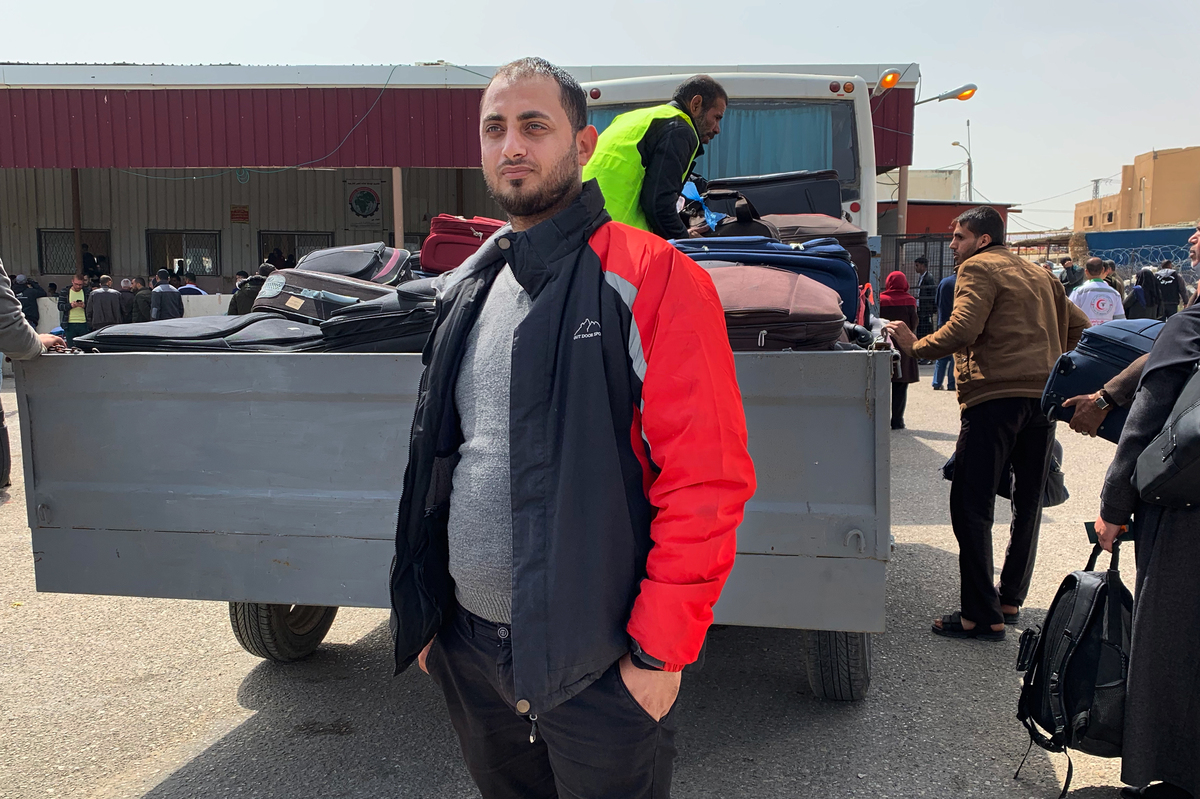 Khalil Abu Ibrahim left Gaza with his family last year, but had to return after struggling to earn a living in Europe. Now he provides a service assisting other young Palestinians as they apply for visas.

Egypt allows in only a few hundred Gaza travelers a day, so Hamas maintains a months-long waiting list. Those who pay for "coordination" — a bribe believed to be pocketed by authorities on both sides of the border — get bumped higher up the list.

The last straw for Siham Shamalakh, an English translator and mother of two, was the Israeli airstrikes in March that hit a Hamas security building around the corner from her well-appointed Gaza City apartment. She slept in the living room, away from windows, for a week and signed up for the waiting list to leave for Egypt.

Across from her bedroom balcony is a building that she and her neighbors believe a Hamas-affiliated group recently moved into — on account of the sudden appearance of guards and police officers in the street and new air conditioning units installed on a previously empty floor of the building.

She is convinced it, too, will be targeted in an Israeli airstrike someday.

"I don't want to sleep [while] I'm afraid from the bombings and the missiles, whether from the Israelis or from Hamas," she says. "I know that I have a nice apartment, and life in Gaza is nice when it's peaceful. But when the escalation comes, I change my mind. I say, no, I want to get the hell out of here."

At Gaza's main hospital, three of its five gastrointestinal specialists left for Canada, Ukraine and the Gulf, and about a fifth of the physiotherapists and the lone cardiac surgeon have gone abroad in the past year, according to hospital staff. Doctors' salaries have plummeted because of the Palestinian Authority's cuts for civil servant salaries and further salary cuts by the cash-strapped Hamas. Many medical students are looking for better-paying jobs abroad. Some doctors have traveled abroad for training, and it is unclear whether they will ever return.

The disappearance of doctors comes just as they are needed most. Hospitals have been overwhelmed, treating more than 7,000 Gazans who, according to the World Health Organization, were shot by Israeli soldiers during a year of protests at the Israeli fence.

Hamas authorities have begun to restrict doctors leaving Gaza, approving travel only for those they are certain will return, according to a Gaza-based doctor who spoke on condition of anonymity because Hamas did not make the travel restrictions public, and he did not want to fall afoul of authorities.

Many young people say they'd stay in Gaza if there were decent work, even with all the other hardships. It hurts, they say, to leave their families, their culture, their home.

Among their parents' generation, many choose to stay. Older Palestinians have long-established families and careers in Gaza. University academics have stable salaries, and some entrepreneurs are investing in new ventures, like a historic home turned café-restaurant and a fancy new wedding hall on the Mediterranean shore for Gaza's booming wedding industry.

And some of the Gazan migrants who've left for Europe have returned.

In search of better work, Khalil Abu Ibrahim took his wife and kids in boats across the Mediterranean last year, from Turkey to Greece and then Austria. But he couldn't keep up with the cost of living, and he and his family have returned to Gaza.

Now he has found a way to make a decent living in Gaza. Using his experience as a migrant, he collects a fee for helping other young Palestinians apply for visas to escape.