Accessibility links
In 'The Ghost Clause,' 2 Marriages, A Missing Child, And Yes, A Ghost In Howard Norman's new novel, a recently deceased man finds himself haunting his former home and observing the new owners, an academic and a private investigator who's searching for a missing child. 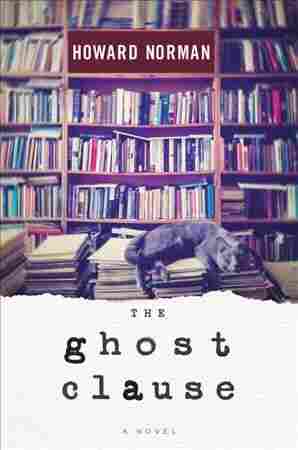 Howard Norman writes elegant prose — but really, that's because everything about Howard Norman is elegant. The Vermont-based novelist and scholar of Native American lore sprinkles his fiction with all the things that interest him, from literary to culinary to planetary. Like many of Norman's previous books, The Ghost Clause pays attention to Japanese poetry, binge-reading Trollope, what makes an intimate supper (mushroom omelets, salad, cherry pie with ice cream), and varieties of Northeast Kingdom moths.

The denizens of Adamant, Vt. — was there ever a better place name? — have a lot going on, even if by "a lot going on" one simply means making sure to leave time to have your cranberry scone toasted at the local café presided over by grumpy Vanessa. The first two people we meet are newly minted Ph.D. Muriel Streuth and her husband Zach, a private investigator at the Green Mountain Agency. They've bought an old house with a library room, and their modern security system keeps picking up "Motion in Library."

Investigations into the unknown motion-detector blips don't reveal much. Fortunately for readers, our narrator soon reveals all (and this is not a spoiler): He is novelist Simon Inescort, whose widow, painter Lorca Pell, sold the house to Muriel and Zach after Simon's untimely death by heart attack on the ferry from Maine to Canada. He also informs us of the title's meaning, which refers to a perhaps-apocryphal Vermont statute whereby if new owners of a building discover it is inhabited by a "malevolent presence," the sale can be nullified.

Many a domestic-thriller writer would have taken this fabulous conceit and used it in constructing an unbearably taut tale of psychological angst. But Norman is after different game — not better, necessarily, just different. The Ghost Clause has myriad elements that could spark mystery, investigation, or terror, from Simon's spirit presence to a young girl gone missing to childless marriages on the brink of failure.

Corrine, age 11, makes townspeople smile, with her childlike mien and obsession over watching, identifying, and saving moths. Her parents and most friends know that her childishness and obsession come along with a place on the autism spectrum, making her too trusting of strangers. When she disappears, Zach begins working hard, too hard, on the case. Muriel feels neglected, then guilty about feeling neglected. As Simon observes the strain on their union, he muses about his relationship with Lorca, its highs and lows. It's clear that they, like these younger homeowners, were very much in love. It's also clear that being "very much in love" can take very different forms. Both couples hope for children.

Thus, Corrine's disappearance, the parentheses between two families, the mystery that will be solved but has little to do with the novel's plot. It's an erotic interlude of longing for a child, a child who is missing, but also about longing for that lost chord that will make an important piece complete, an artistic longing shared by novelists, composers, poets, anyone with a vision for their life — including parents and parents-to-be. As a writer and educator, Norman must have more than passing familiarity with Virginia Woolf's "The Death of the Moth." Woolf's essay is, among other things, about idleness, the creative life, and our imperative to be present for moments of fiery inspiration.

Which is where Simon comes back in. He's not sure why he still "exists" ("What am I to call myself now, a revenant?"), but exist he does. The "Motion in Library" sensor keeps going off because Simon keeps picking books off the shelves to read, from the letters of Henry James to The Mayor of Casterbridge, then falling asleep with them on his chest while he's in the rocking chair. He even keeps journals, scribbling away in Moleskine notebooks, that he hides under the floorboards in the cabin on the property. Simon is a far from perfect spouse, novelist, or narrator, but he hasn't given up on life's goodness and pleasures. As he guides you through a season in Adamant, you may find yourself dreaming about taking a sabbatical up north.