Accessibility links
New Earthquake Shakes Southern California On Friday Night The U.S. Geological Survey reported the magnitude was 7.1. It's the biggest earthquake in the area in 20 years and follows a 6.4 magnitude earthquake Thursday. 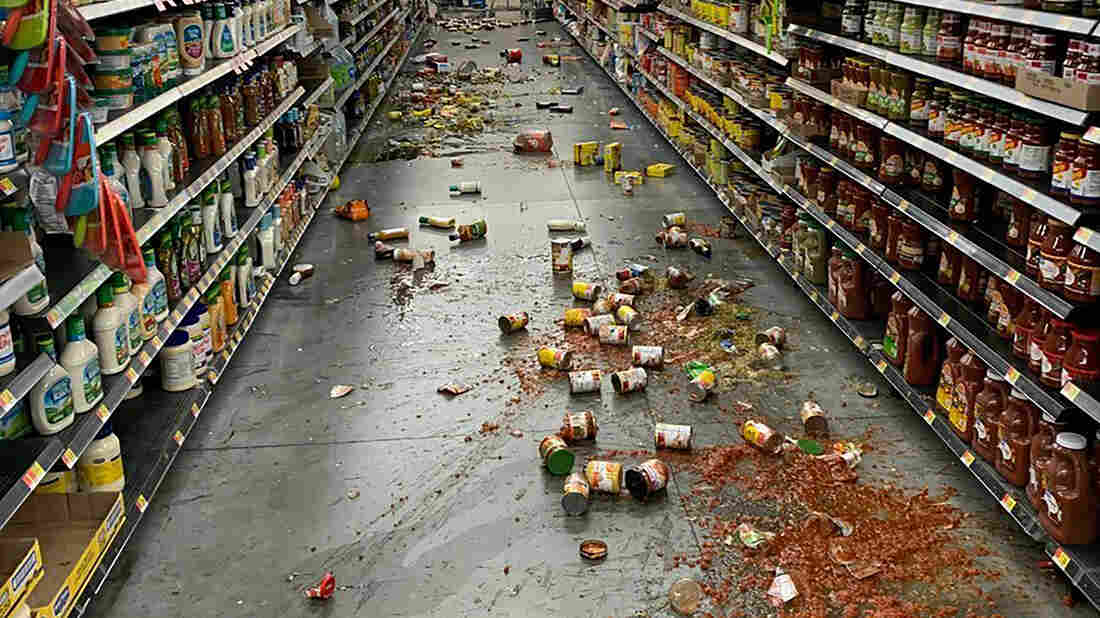 Food that fell from the shelves at a Walmart following an earthquake in Yucca Valley, Calif., on Friday. Chad Mayes via/AP hide caption 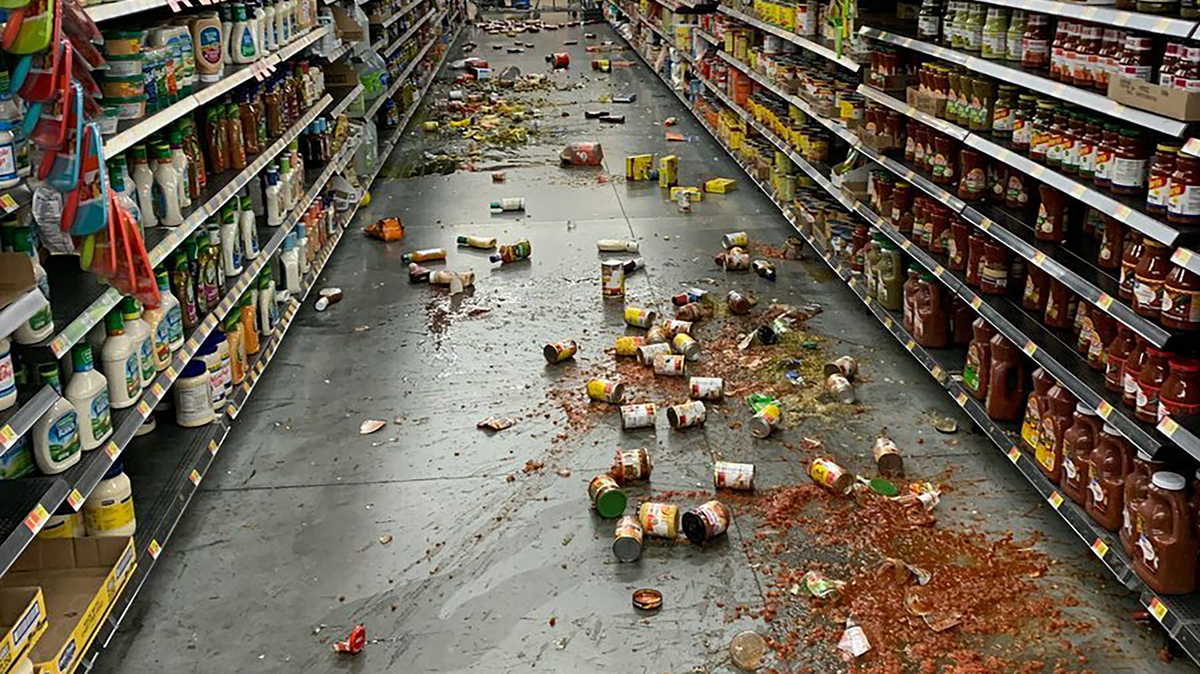 Food that fell from the shelves at a Walmart following an earthquake in Yucca Valley, Calif., on Friday.

Southern California was hit by another big earthquake at 8:19 p.m. local time Friday, after a quake rattled the region a day before. The U.S. Geological Survey reported the magnitude as 7.1 with a shallow depth of about 10.5 miles.

It was centered near the same Mojave Desert site as the 6.4 quake on Thursday and near the small city of Ridgecrest.

"We haven't had an earthquake this size in 20 years," seismologist Lucy Jones told reporters at Cal Tech Friday, speaking of earthquakes in Southern California.

A USGS official said people should expect at least one more of magnitude 6.1 or higher.

On Sunday morning, officials said in a press conference that the area was returning to normal.

Ridgecrest police chief Jed McLaughlin said the roads were in good condition and the water system was fully operational.

In a press conference held at 2 p.m. ET Saturday, Egill Hauksson, a seismologist with the Caltech Seismological Laboratory, said the probability of a magnitude 7 earthquake happening in the area in the next week was 3%, but the probability of a magnitude 6 earthquake in that time frame was 27%, and the area is "likely to see one or two of those in the next week."

Reporting from a mobile home park where the earthquake had caused significant damage, Eyton Wallace of KGET News told NPR's Weekend Edition that hundreds of aftershocks had been taking place, and they were happening "every few minutes."

The city's police chief, Jed McLaughlin, also said on Saturday "nothing but minor injuries" have been reported.

Local authorities said they were "inundated" with reports of gas leaks at residences and received reports of at least two structure fires.

A spokesperson for electricity provider Southern California Edison told NPR that, as of Sunday afternoon, all earthquake related power outages had been safely repaired and power had been restored.

The California Highway Patrol said portions of State Route 178 were closed because of rock slides, but they were quickly reopened.

Conditions through SR178 in the Canyon pic.twitter.com/l3rnYGhutJ

California Gov. Gavin Newsom requested a presidential emergency declaration from the White House. He declared a state of emergency in San Bernardino County early Saturday. Newsom earlier put the state operations center of the Governor's Office of Emergency Services on its highest alert.

Jones went with new terminology — changing the description of Thursday's quake to a foreshock in light of the larger one.

So the M6.4 was a foreshock. This was a M7.1 on the same fault as has been producing the Searles Valley sequence. This is part of the same sequence -

Jones said the region is in the midst of an earthquake sequence and "another magnitude 6 would not be surprising to anybody."

Reports say the quake was felt as far as Sacramento to the north, Mexico to the south and Las Vegas to the east, according to The Associated Press.

The rolling was felt at sports events throughout the region.

In Las Vegas, a summer game between the New Orleans Pelicans and New York Knicks was stopped early because of the earthquake.

Few injuries were reported from the quake the day before, although broken gas lines caused two house fires.

Faults, the breaks in the planet's crust where earthquakes occur, are plentiful in California.

"If you looked at a map of southern California and wanted to imagine all the faults, just throw a pile of spaghetti down on it, and all those little strands would be faults all over the place," Margolis said.

Meantime, seismologist Hauksson noted, "For a while, Ridgecrest was known as the earthquake capital of the world because they had so many small earthquakes. So it's not a big surprise that this [earthquake] sequence happened."