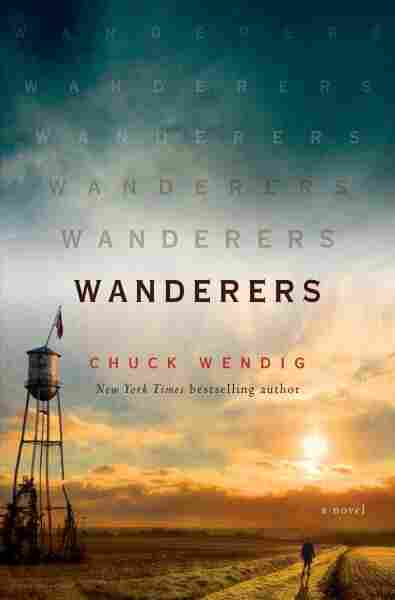 Political upheaval tends to push writers to create narratives that enter into conversation with the most salient themes of the time, and Chuck Wendig's Wanderers is one of those. A dystopian, apocalyptic novel that comfortably occupies a space between horror and science fiction, Wanderers is full of social commentary that digs into everything from global warming to racial tension, while never preaching or bogging down the action-packed story.

Shana wakes up one day to find that her sister, Nessie, is acting weird; she's walking barefoot along the road outside their house and refusing to acknowledge Shana, or anyone else. The young girl seems to be sleepwalking, and every attempt to stop her or wake her up is unsuccessful. Soon others in a similar state join up with her, and this is how the wanderers start. No one knows what's wrong with them, or where they're going, and attempts to physically restrain them lead to violent shaking, a rising temperature, and, if they're not released, an explosion.

Soon a plethora of governmental agencies become involved. The country demands answers. Are the sleepwalkers sick? Is this a pandemic? Is it a terrorist attack? Is it a sign of the end of the world? No one knows, and they can't hold the sleepwalkers down, get them to respond, or even get a blood sample because needles break against their skin. Loved ones follow the sleepwalkers on their journey; they become known as shepherds, and the walkers are their flock.

The strange situation accentuates political tensions and gives those who already loathe otherness and diversity a reason to lash out. As scientists struggle to discover what's happening and the flock keeps walking, the country descends into mayhem, murder, and extreme violence fed by bigotry.

Wanderers gives readers a deconstructed apocalypse made up of various moving parts. Wendig is extremely political, but science is at the core of his story; the discussions his scientists have are based on real events, and that makes everything feel uncomfortably plausible. This is a novel about what really goes on when we face something new and scary, and it shows what agencies like the CDC face whenever we're threatened by something deadly.

They had no idea what this was, where it began, or what it could do. And thus the true danger of a brand-new pandemic became overwhelmingly clear: Act too slow, it could take over. By the time they figured out what it was, it could have raced through the population. Alternatively, act too fast, too harshly, and there were legal consequences: They did not have broad, sweeping powers, and for good reason. Had to be a balance between measured investigation an swift action, or else they'd be either in a full-blown pandemic or locking people up in camps.

There are many intertwined personal narratives here, each retaining a unique voice and following a distinctive path: A walker's father, Nessie's sister Shana, an aging rock star running from himself, an ex-cop with a devastating head injury, a preacher who falls into disgrace and loses his family, and a group of white supremacists collide in various ways, giving Wendig a chance to hold up a mirror to America and force it to look at its current sociopolitical landscape.

'Wanderers' is engaging and entertaining. It's uncomfortable to read, but also a timely novel that demands a place in the spotlight.

Shana notes the problem isn't "the camo pants and the trucker hats" or "the long hair, the mullets, the scraggly beards." No, something about these "patriots" who hate the Democratic president — a woman — is worse. They hate anyone who isn't white. They want to get rid of all foreigners. They want to murder the president and vote for his opponent, a man who spouts a racist and homophobic rhetoric. They also wear "their HUNT THE C*** T-shirts, their s***-kicker boots, their bright-white CREED SAVES AMERICA baseball hats." They are bigotry personified. While some blame the sleepwalkers on a new disease, a comet, or the Devil, the supremacists use it as an excuse for racial and ethnic cleansing. They know the disease was not meant for them, because "God wouldn't do that to Americans." This gives them a reason to kill everyone else.

Wanderers, which comes in at 800 pages, covers a lot of terrain. Small personal narratives of survival, trauma, and loss fill its pages and serve as cohesive elements to hold the apocalypse together. But from time to time, Wendig delves into the most horrific aspects of a pandemic and offers chilling passages packed with poetic brutality that show readers what could happen to us at any moment:

The tree the human corpse hangs from is bare and brutish, a dark and skeletal hand reaching toward a wide sky choked with the smoke of distant wildfires. The corpse belonged to a man, once, his age indeterminable. The skin and the clothes are colonized with white fuzz that looks not unlike a mass of caterpillars. Seven tubules have emerged from his mold-claimed flesh, each snaking up toward the sky, bulging at the end like a pimple straining to be popped by impatient fingers.

Wanderers is engaging and entertaining. It's uncomfortable to read, but also a timely novel that demands a place in the spotlight. Wendig takes science, politics, horror, and science fiction and blended them into an outstanding story about the human spirit in times of turmoil, claiming a spot on the list of must-read apocalyptic novels while doing so.