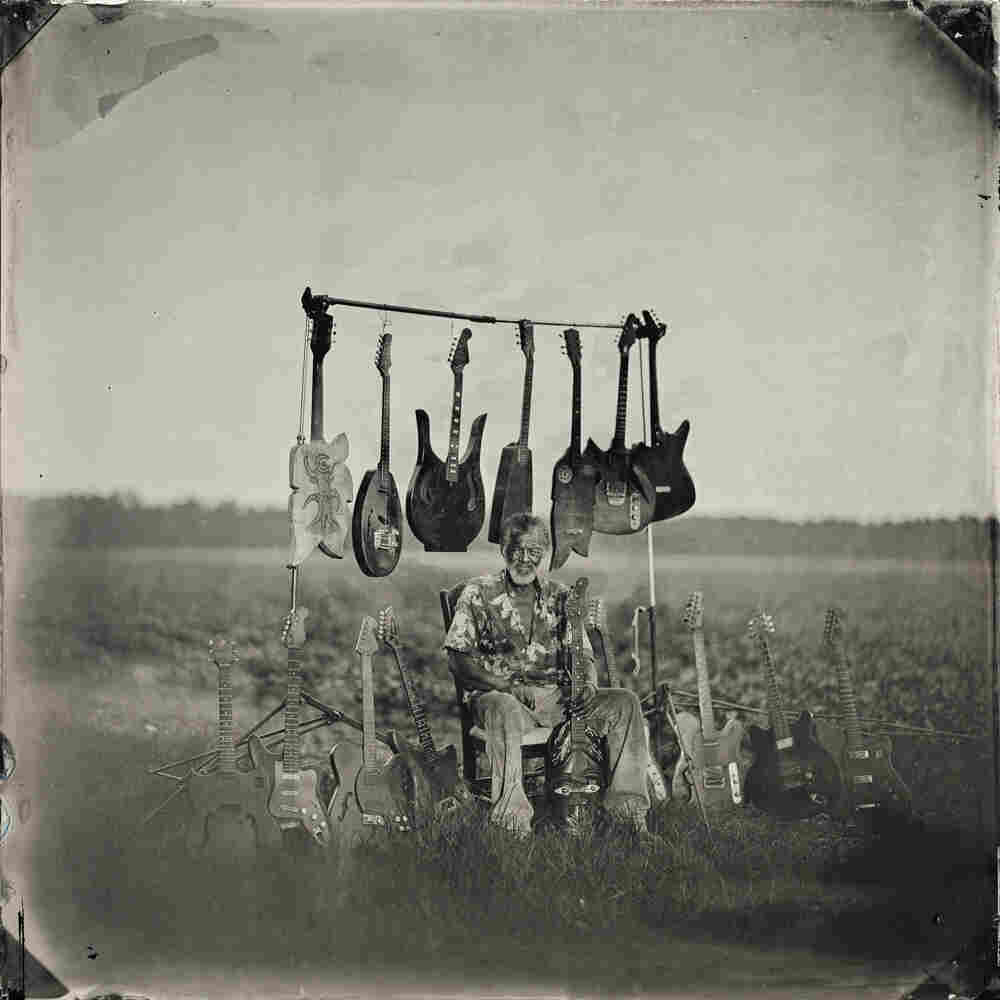 Luthier Freeman Vines sits with his hand-carved guitars in the tobacco field by his house, 2015. Tim Duffy/Courtesy of Music Maker hide caption 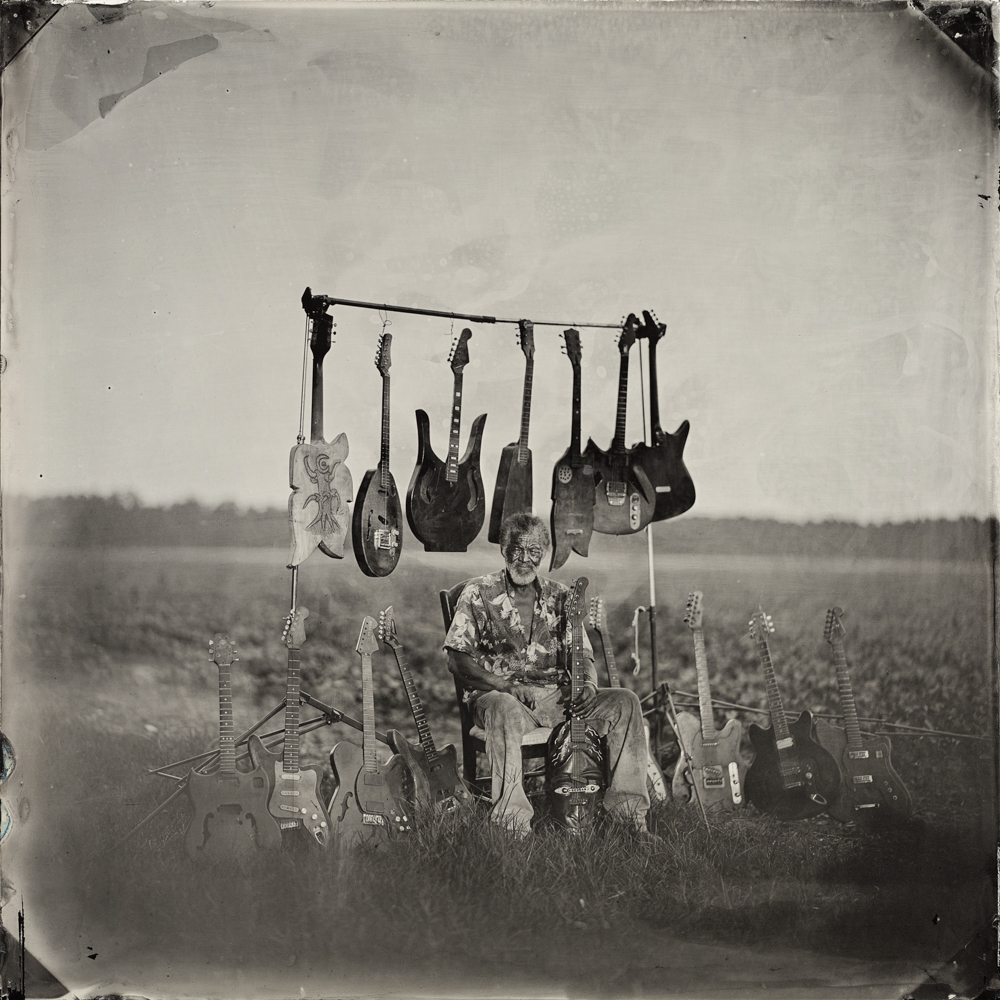 Luthier Freeman Vines sits with his hand-carved guitars in the tobacco field by his house, 2015.

Timothy Duffy is on a mission to document America's vernacular music — specifically, the blues — and the everyday men and women who carry on the tradition. He's the co-founder of Music Maker Relief Foundation, a nonprofit that helps struggling and aging musicians.

Duffy is also a photographer, and his new project is a collection of portraits of these musicians, who are not typically in the spotlight. It's the subject of an exhibition at the New Orleans Museum of Art through the end of July.

Duffy's vivid black-and-white portraits, captured with an early photographic process called tintype, are also collected in the new book, Blue Muse: Timothy Duffy's Southern Photographs. The book includes a compilation album so you can hear the music behind the faces.

Over its 25-year history, Music Maker has helped more than 400 artists, most of them in the latter stages of life. The bluesman Taj Mahal is among the better-known musicians who have worked with the nonprofit to help celebrate lesser-known players.

"Both the microphone and the camera pass them by," Taj Mahal says. "A lot of the work was done by ... people who are nameless."

Music Maker does everything from booking gigs and producing records to paying bills and buying instruments.

"If you want to talk about reparations, that's what we do," Duffy says. "We write the checks. ... We're not afraid to give people cash."

One musician who has received Music Maker's support is Alabama Slim. 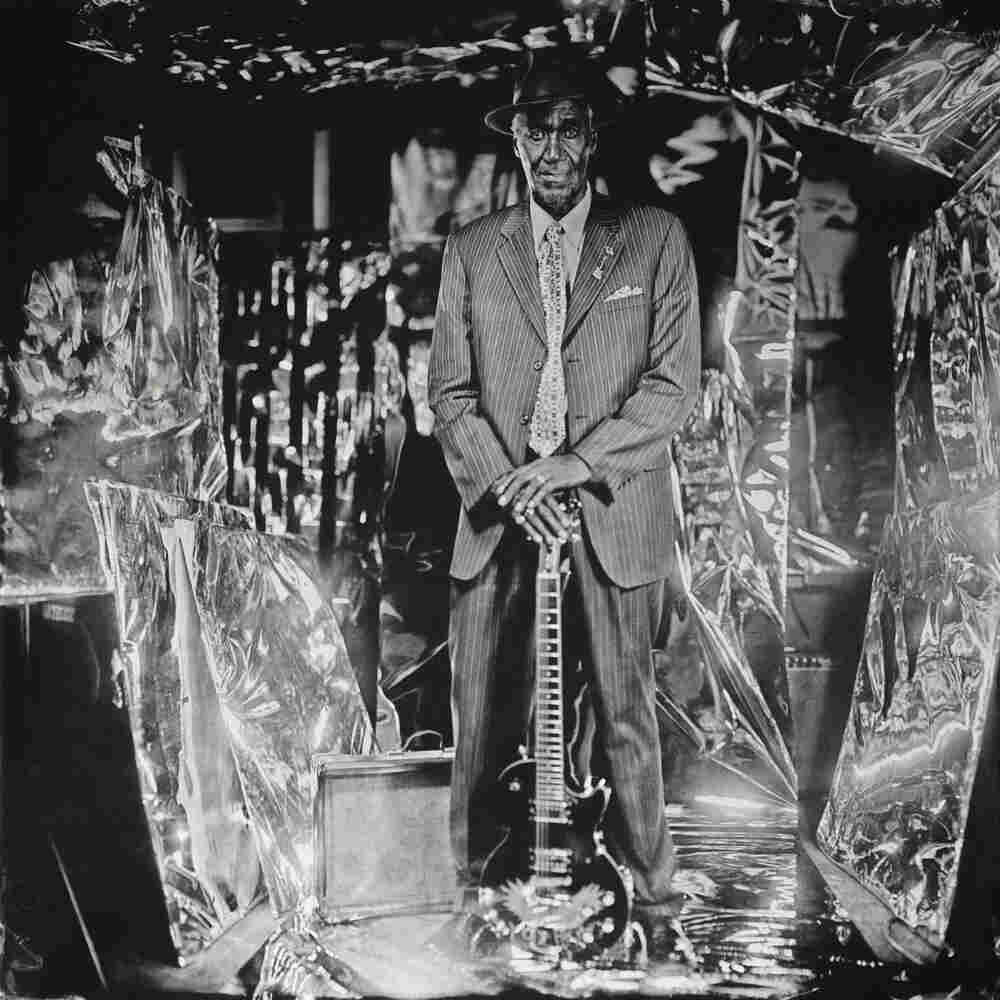 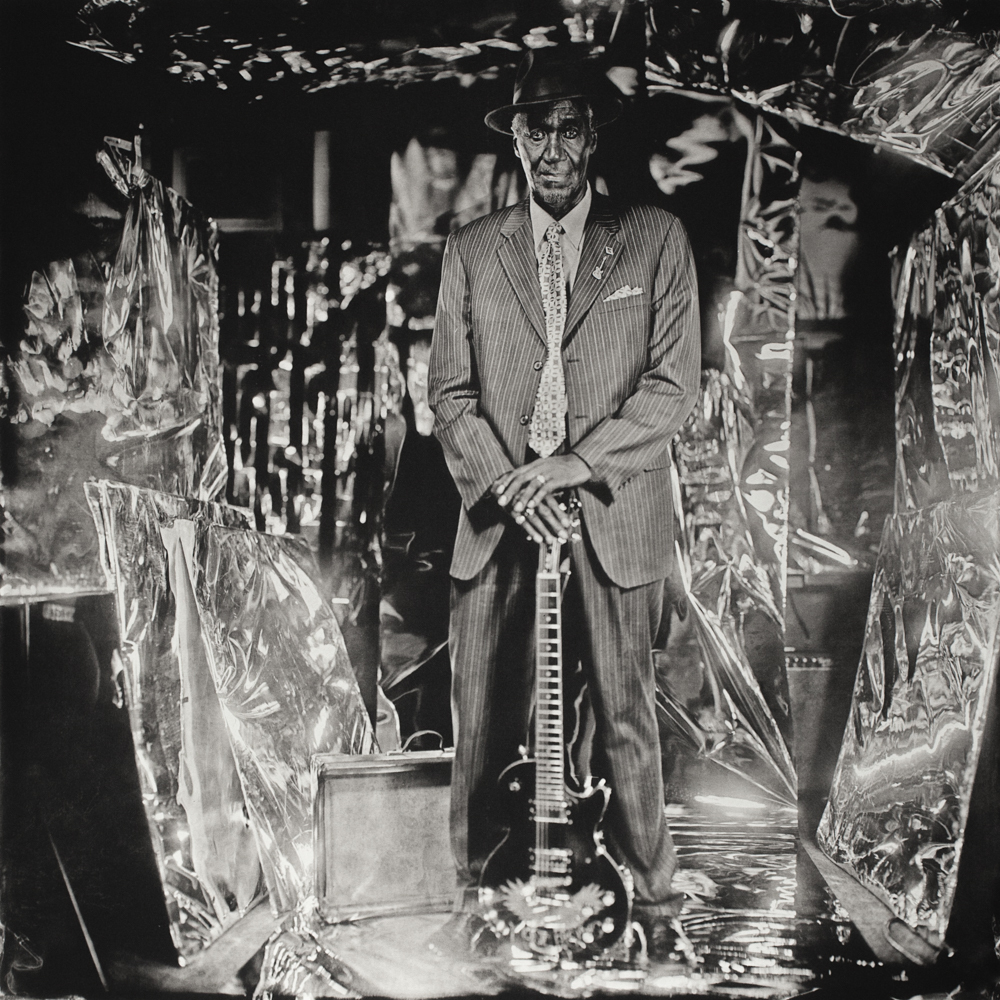 Alabama Slim was born Milton Frazier. Long and lean at 80 years old, he picked up the blues as a boy growing up in rural Alabama. Two of his portraits appear in Blue Muse.

"It's kinda beautiful there because, actually, that's me," Slim says. He says Timothy Duffy sees things others might not pay attention to. "It seemed like he kept the serious part about me. Because my music, I'm serious about it."

Music Maker produced the The Mighty Flood, an album Slim made with his cousin, Little Freddie King. It tells the story of how they evacuated New Orleans after Hurricane Katrina. The organization also books him on tours overseas.

"It's like a can opener prying for it to come out of there," he says about performing. "After I sing the blues and the people love it, hey, I feel good. Yea. I feel real good." 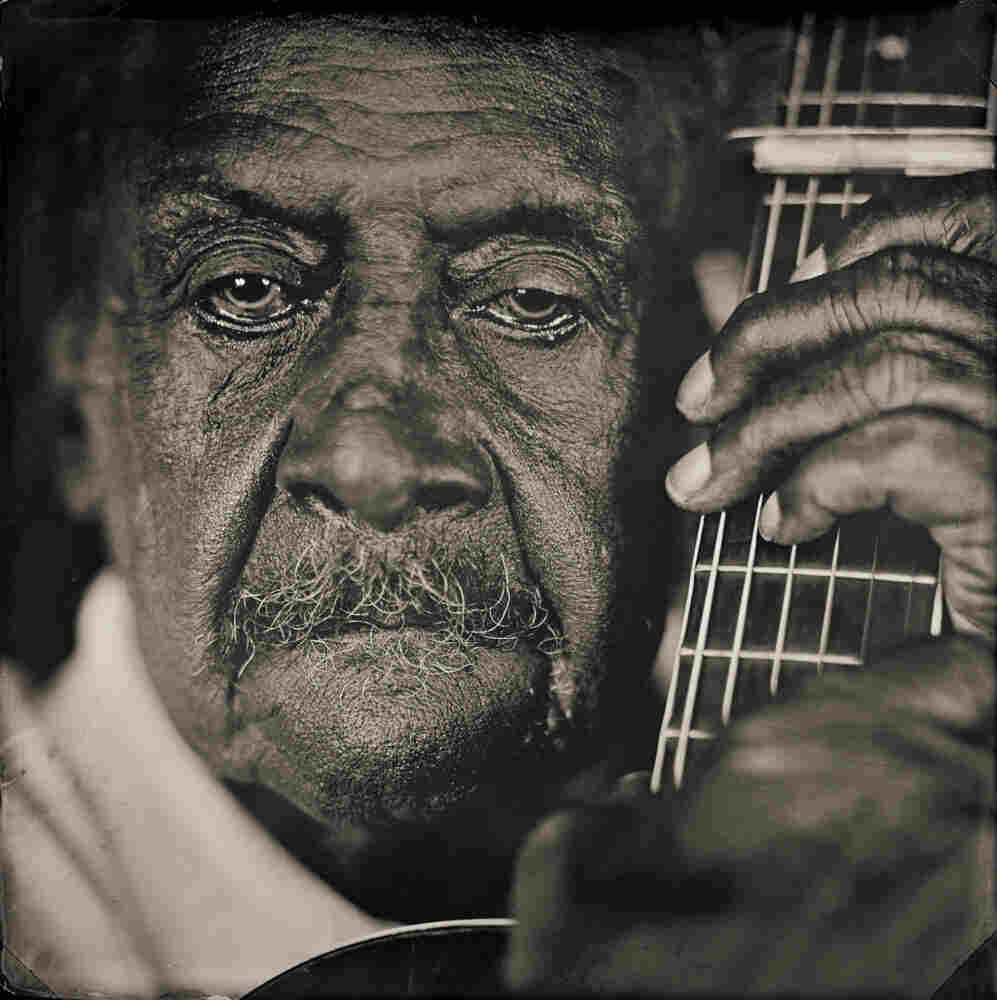 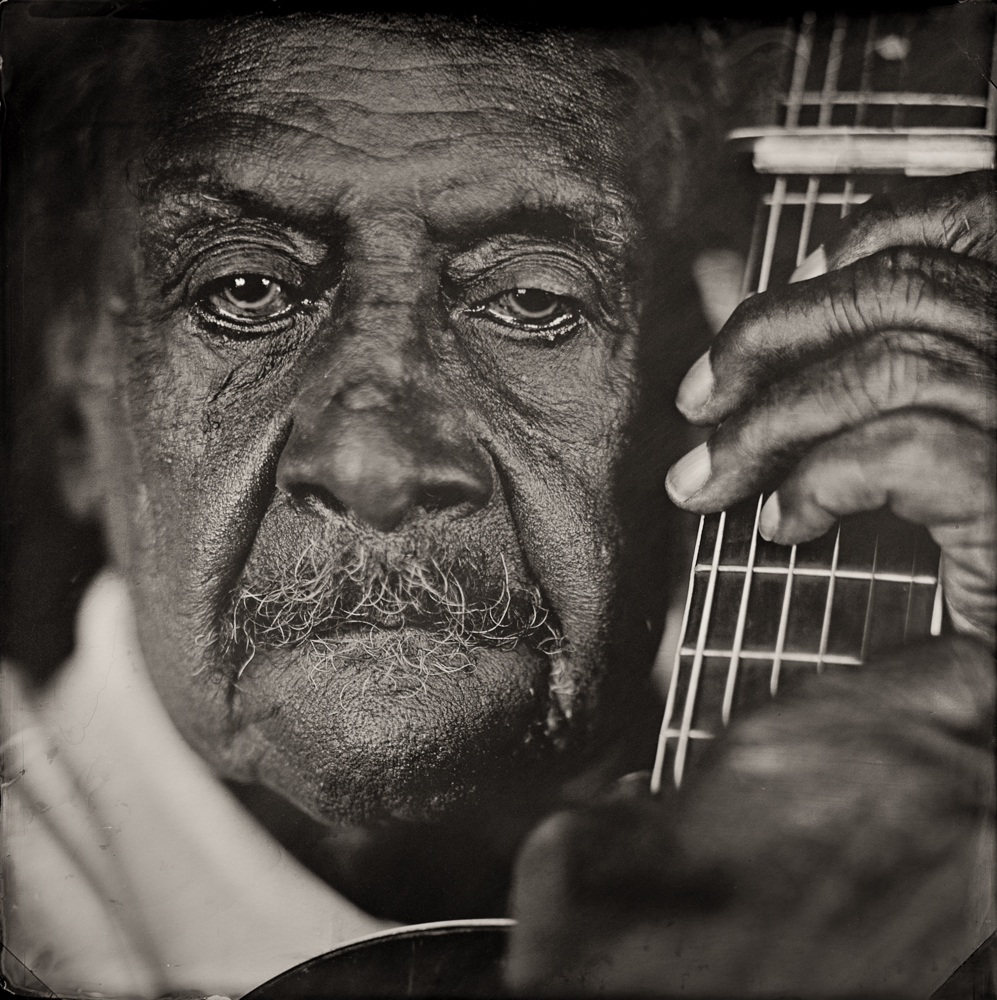 The late James "Boot" Hanks was a Piedmont blues guitarist from rural Virginia.

"He's looking dead at you; his eyes are piercing," Duffy says. "His skin looks of a hard life. But there's no animosity, and no fear, and just love."

Duffy says Hanks was an impoverished sharecropper when they met. ("Sharecropper is a code word for modern-day slave," Duffy says.) The foundation helped Hanks make his first record when he was 79 years old, and got him safe housing and performances around the world. It transformed his life.

"He played Lincoln Center, and in his community he became not that funny old guy that lives in a trailer [with] no running water, no electricity," Duffy says. 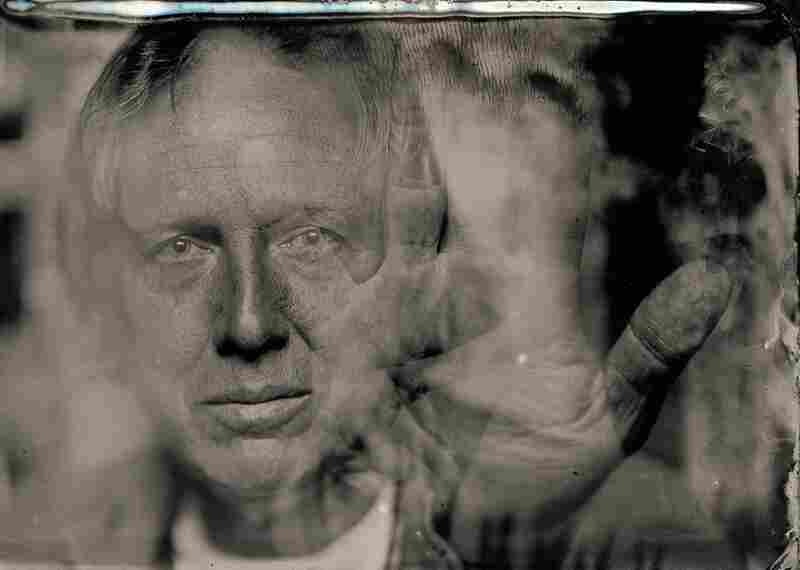 Freeman Vines of Fountain, N.C. makes hand-carved guitars. Duffy took the picture atop this page the first day he met Vines, and was struck by the artistry that goes into Vines' instruments.

"Each of these things meant something," Duffy says.

Some of the guitars are carved from wood that people in the community say came from trees known to be used for lynchings during Jim Crow. But Vines takes it even deeper.

"He says ... 'There's graves for the white people but there's no graves for the slaves. Am I walking on my ancestors?'" Duffy says, quoting Vines. According to Duffy, everything Vines finds he considers to be from the "the blood in the root — and so everything he makes is a hanging-tree guitar."