Accessibility links
Iran's Uranium Enrichment Breaks Nuclear Deal Limit. Here's What That Means The move signals that Iran is losing patience with the 2015 agreement after the U.S. blocked the economic relief promised. 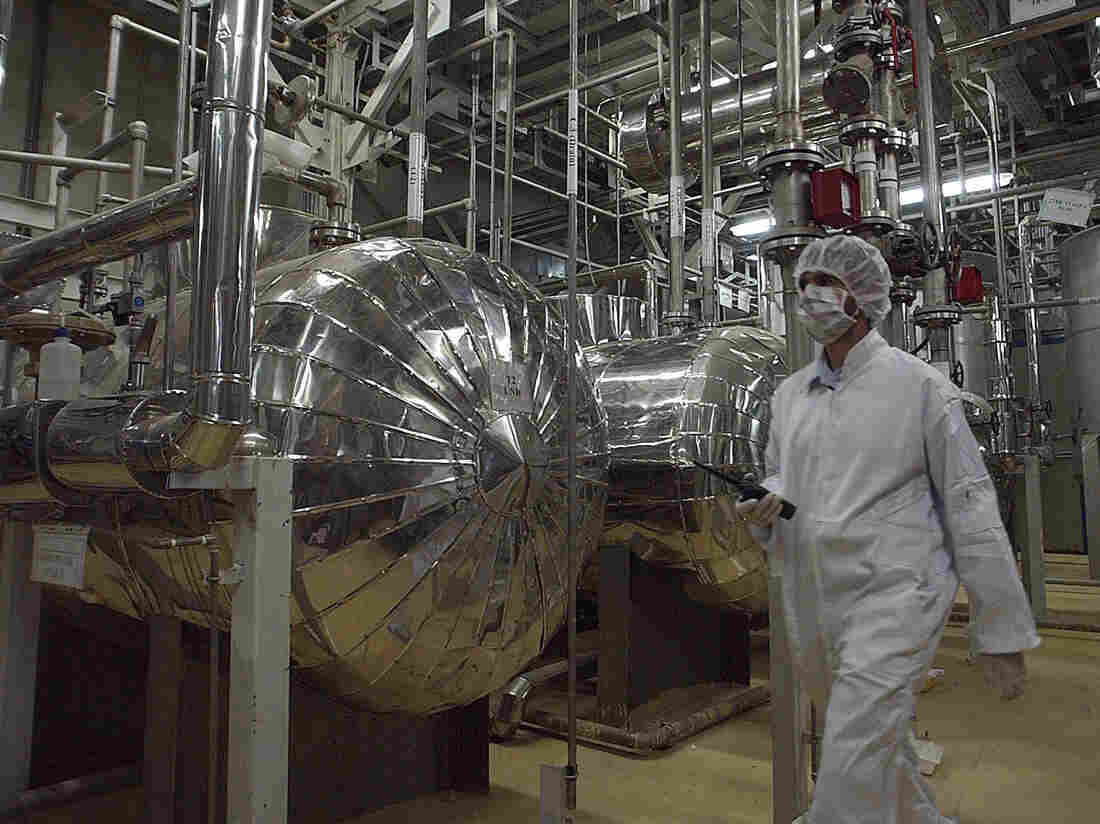 An Iranian security official in protective clothing walks through a uranium conversion facility in 2005. Iran says it is now enriching uranium above the limit set in the 2015 nuclear deal. Vahid Salemi/AP hide caption 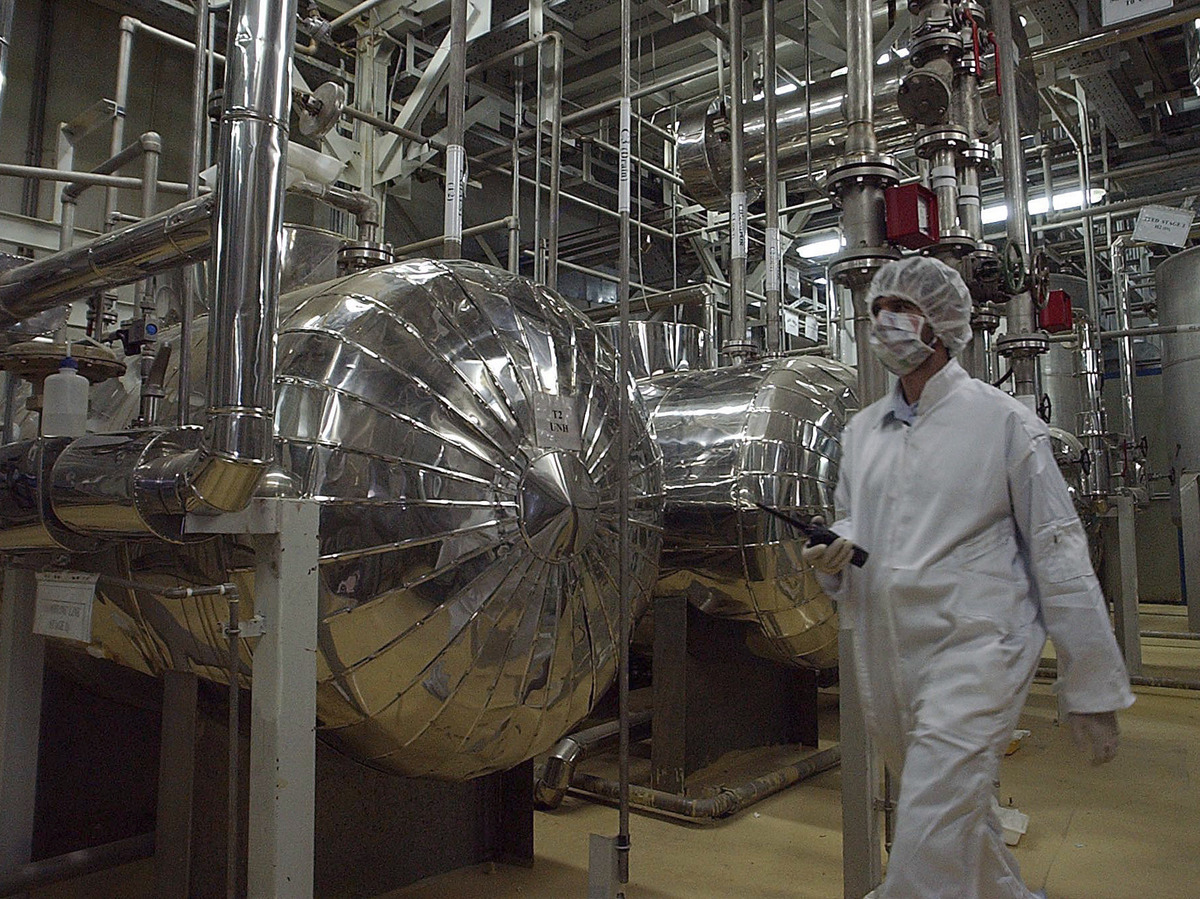 An Iranian security official in protective clothing walks through a uranium conversion facility in 2005. Iran says it is now enriching uranium above the limit set in the 2015 nuclear deal.

Iran has crossed another line set in the 2015 nuclear deal between it and major world powers.

According to state media, Iran has begun enriching uranium above levels enshrined in the agreement. The move sends a signal that Iran is losing patience with a deal that has not provided the economic relief promised, more than a year after the United States withdrew from the agreement.

By Monday, Iran had reached levels of around 4.5% enrichment, Behrouz Kamalvandi, the spokesman for the Atomic Energy Organization of Iran, told the semiofficial Fars news agency. He warned that Iran could go as high as 20% in the future, though that level is "not needed now."

Inspectors from the International Atomic Energy Agency confirmed that Iran has crossed the line.

"This is to protect the nuclear deal, not to nullify it. ... This is an opportunity for talks. And if our partners fail to use this opportunity, they should not doubt our determination to leave the deal," Araghchi said.

Under the 2015 deal, Iran agreed to keep its enrichment of uranium below 3.67% purity. It was one of several limits set in an effort to keep Iran at least a year away from accumulating enough material with which to build a nuclear bomb.

In exchange for holding down enrichment levels, Iran was supposed to see economic sanctions lifted and more opportunities for trade. But the U.S. reimposed the sanctions it had promised to lift and is demanding that other countries cut off most business with Iran. The Trump administration says it's trying to force Iran to renegotiate a tougher deal and change its behavior in the Middle East.

Now, Iran is hurting for cash as oil and other exports dwindle.

Iran says it will stop meeting its commitments under the nuclear deal unless European countries and other trade partners find a way to provide the economic benefits it was originally promised.

What is enrichment anyway?

Uranium is found in nature, but not all uranium is useful as a nuclear fuel. One particular isotope, uranium-235, can be used to power nuclear reactors and bombs.

Uranium-235 makes up only about 0.7% of the uranium that's dug out of the ground. Enrichment is the process of concentrating the uranium-235 to higher levels.

At about 3% to 5%, enriched uranium can be used for nuclear power reactors of the sort that exist in many nations all over the world.

At 20%, it's used in certain kinds of research reactors, which are less common.

Closer to 90% is considered weapons grade.

Iran is one of only a few nations that possesses enrichment technology.

To what level is Iran enriching its uranium?

Before the nuclear deal, Iran had begun enriching large quantities of uranium to nearly 20%. For technical reasons, the gap from 20% to 90% is relatively small, and most experts agreed that the country was within weeks or a few months of getting material for a bomb, if it decided to "sprint" toward such a goal.

But Iran never did. Instead, it opted to surrender a large quantity of its 20% enriched uranium in exchange for relief from economic sanctions. The uranium was diluted and then exported to Russia, according to Corey Hinderstein, vice president for international fuel cycle strategies at the Nuclear Threat Initiative and a former Obama administration official who helped oversee the deal.

Iran also shut down some of the equipment used to enrich uranium — devices known as centrifuges.

Under the deal, Iran continued to enrich, but it stopped at the limit set in the agreement. "That limit, 3.67%, is in the Iran nuclear deal, and it's there for a reason," Hinderstein says. It was one of the numbers that kept Iran from producing a bomb quickly.

After Trump was elected, Iran kept to the deal in the hopes that the other parties, including Europe, China and Russia, would continue to provide economic benefits. But the Trump administration has threatened secondary sanctions on any entity that does business with Iran.

Now Iran says it is enriching past the levels set by the agreement.

Technically, it can be done with no modifications to Iran's enrichment setup, says Houston Wood, a professor of mechanical engineering at the University of Virginia. "It's a really simple thing for them to do."

In addition to being required to keep its enrichment levels low, Iran was also restricted in how much uranium it could have. Under the agreement, it could have no more than 300 kilograms (661 pounds) of 3.67% enriched uranium.

On July 1, Iran said that it had exceeded the 300-kilogram cap. The International Atomic Energy Agency later confirmed that Iran had crossed that line.

So is Iran within "weeks" of getting enough material for a nuclear weapon again?

No. It will take Iran time to enrich uranium back to higher levels and to accumulate enough enriched uranium for a weapon.

Because of the way the nuclear deal was structured, Iran is still about a year away from getting the material together again, according to Hinderstein. But that time will likely shrink in coming months, unless the deal can be salvaged.

Iran continues to officially maintain that its program is peaceful and that it does not want a nuclear weapon. The International Atomic Energy Agency has found evidence of a nuclear weapons program in Iran that was active until the mid-2000s.

Is there any way to stop Iran from going down this road?

Iran has said it is willing to go back to the deal if it is given the economic benefits it was promised. That will be difficult as long as the U.S. continues to enforce strict sanctions on the nation.

But there is not another obvious way to stop Iran from accumulating dangerous levels of nuclear material. Sabotage efforts and assassinations have slowed the country's program in the past, but such methods have been unable to stop Iran outright.

Similarly, military action against Iran's nuclear facilities would probably set the program back, but only temporarily. "You just can't bomb their program out of existence," says David Albright, president of the Institute for Science and International Security. "I think what you're left with is negotiations."