Accessibility links
NASA Will Open Pristine, Sealed Samples of Moon Rock Fifty years ago, Apollo astronauts collected their first moon rocks. Those samples are still being studied to mine lunar secrets. And scientists are hoping to get access to more of them soon.

Darby Dyar says that as a kid, whenever Apollo astronauts returned from the moon, she and her classmates would get ushered into the school library to watch it on TV.

She remembers seeing the space capsules bobbing in the ocean as the astronauts emerged. "They climbed out and then they very carefully took the lunar samples and put them in the little rubber boat," Dyar says, recalling that the storage box looked like an ice chest.

Nearly a half-ton of moon rocks were collected by the six Apollo missions to the lunar surface. And as the 50th anniversary of the Apollo 11 first landing mission approaches, NASA has decided to open a still-sealed, never-studied moon rock sample that has been carefully saved for decades, waiting for technology to advance. 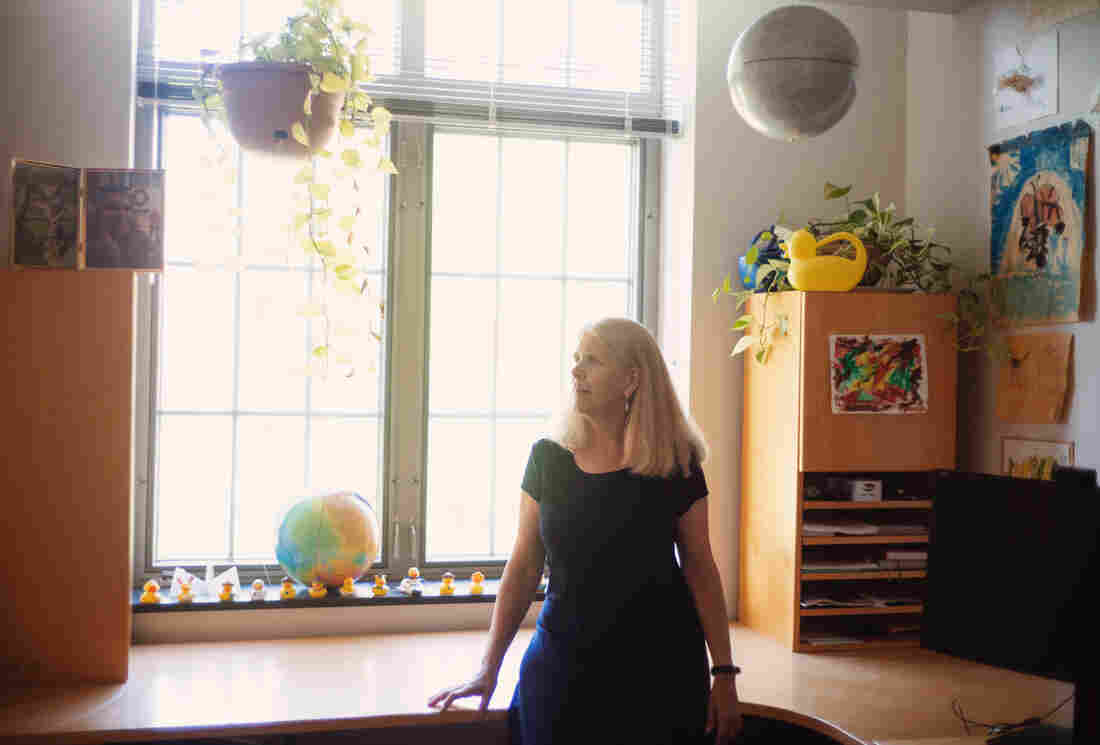 Dyar is one of the scientists picked to do experiments on this pristine sample. She has spent her whole career studying the moon rocks she first saw on television as a child, although back then she never would have guessed it.

"I was growing up in Indiana in the 1960s. Girls didn't do science," Dyar says. "I never saw a woman scientist."

She went to college planning to be a journalist. Instead, she ended up majoring in geology. In her senior year, needing a job, she started working for a researcher who had gotten some of the newly arrived moon rocks, which were kept under lock and key.

"We all knew that the filing cabinet in his office was the safe," Dyar says. "I remember my hands shaking the first time he said, 'Well, you know, grind this up and put it in this sample holder,' and I was like, 'Are you sure?' " 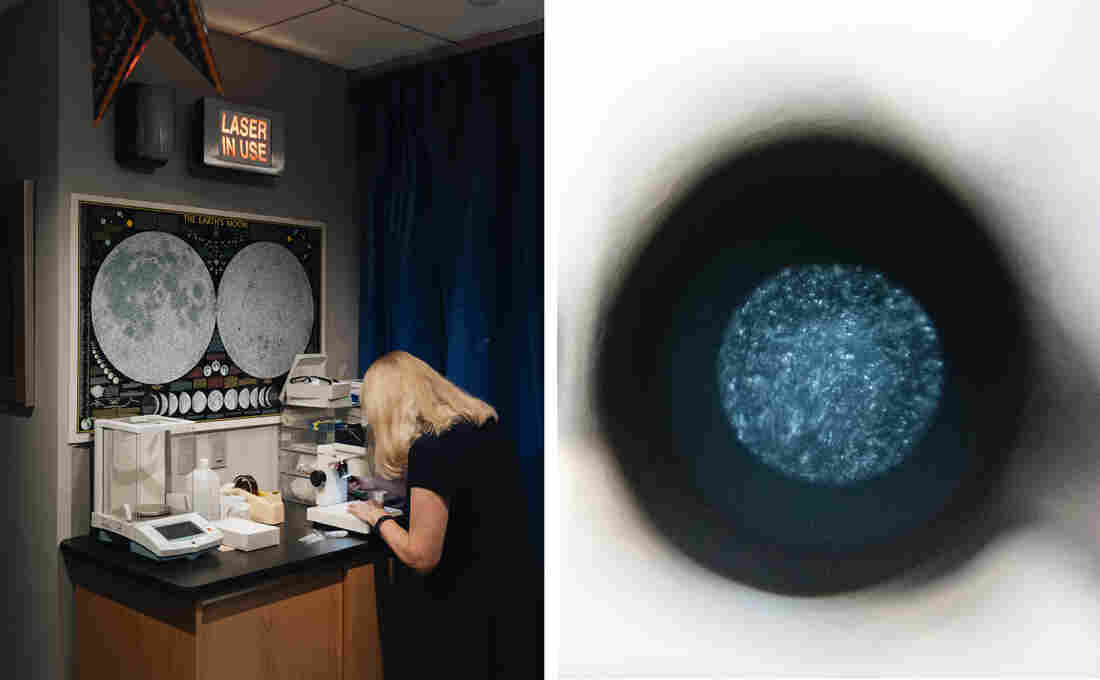 (Left) Darby Dyar observes various samples taken from the moon, some as small as grains of sand, which all have to be returned to NASA after Dyar finishes studying them at her lab. (Right) A moon rock as seen under the microscope. Kieran Kesner for NPR hide caption

Forty years later, she handles moon rocks with confidence. She's a senior scientist at the Planetary Science Institute and the chair of the astronomy department at Mount Holyoke College, where she studies all kinds of lunar samples. Some are thin, translucent slices of rock on microscope slides. Others look like gray pebbles in tiny glass vials.

A few of the containers look empty. "If you had the microscope, you could look at these vials that seem to be empty and in them you would find tiny single crystals of lunar samples, which we carefully save because we have to return every speck of this to Johnson Space Center when we're done," Dyar says.

At Johnson Space Center in Houston, the chief repository for Apollo samples, the rocks and dirt are stored in special cases that are locked inside giant vaults. Ryan Zeigler, the curator of the Apollo lunar sample collection, says the six Apollo missions to land on the moon brought home 842 pounds of lunar material.

He describes that as "a couple refrigerators' worth of samples in terms of sheer volume and weight."

A tiny fraction of all this was destroyed in analytical experiments. And another small amount is out on display, in museums. But the vast majority is available for study, and hundreds of researchers have requested samples of moon rock over the years.

"There are 2,200 individually numbered samples that came back and we've looked at 2,194 of them," Zeigler explains. "So we only have six unstudied samples from the moon." 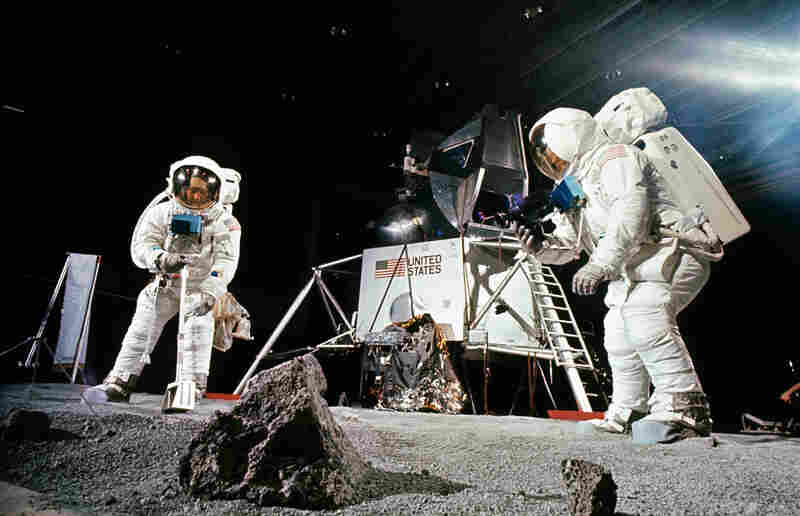 Buzz Aldrin (left) practices collecting a sample while Neil Armstrong photographs during a training session before the Apollo 11 mission. The Apollo 11 astronauts returned with about 50 pounds of material, including 50 rocks. NASA hide caption

Of the unstudied ones, a few are also untouched. They were vacuum-sealed on the moon and have never been opened. Now the agency is getting ready to unseal one for science.

"It's not exactly because it's the 50th anniversary, but it sort of is," admits Zeigler, who says that the upcoming anniversary made them think about the samples that were set aside during Apollo for some far-off day when new and better instruments would allow for markedly improved analysis.

"I think we knew that there had been some samples put away for future uses," says Dyar, who is thrilled to be a member of one of the six science teams that will look at this pristinely preserved material. "I remember as a graduate student thinking, 'Man, I wonder what that could be! What will we be doing in 40 years?'"

What she'll be doing is studying tiny glass beads that formed during ancient eruptions, to learn about volcanic activity on the moon billions of years ago. But she will have to be patient. It will take time for NASA to work out exactly how to best open the sealed sample under controlled conditions, and that historic event probably won't occur before next year. 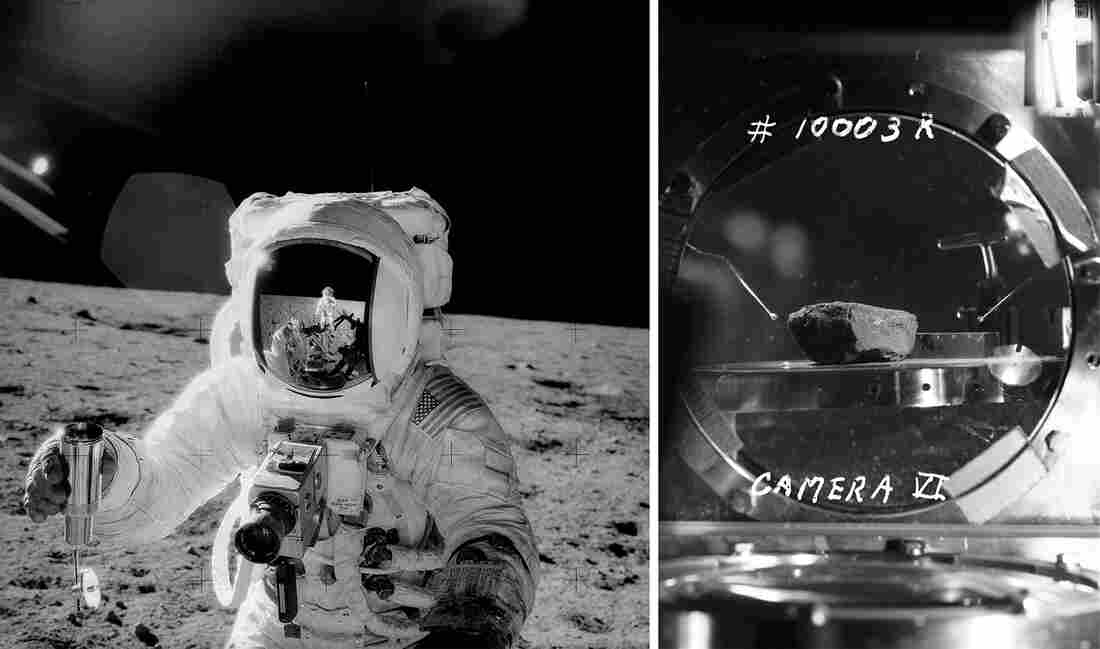 Already, lunar samples have told scientists a lot about how the moon formed in a collision between a giant body and the early Earth. But researchers have also studied moon rocks to learn about the rest of the solar system. By dating rocks from lunar craters, they can tell when different-sized meteorites hit the moon, which helps them understand the history of other planets that were being similarly bombarded.

"So it's really the underpinning of a huge amount of planetary science, just being able to relate the size of the crater to how old it was," Dyar says.

NASA is aiming to return astronauts to the moon — maybe as soon as 2024, if the agency can get the extra funds needed to do it. The lunar samples lab has plenty of space to hold more material, Zeigler says.

If Dyar could go to the moon and collect any rock, she says she'd head for a giant crater at the south pole, where some massive impact seems to have punctured the moon's crust. 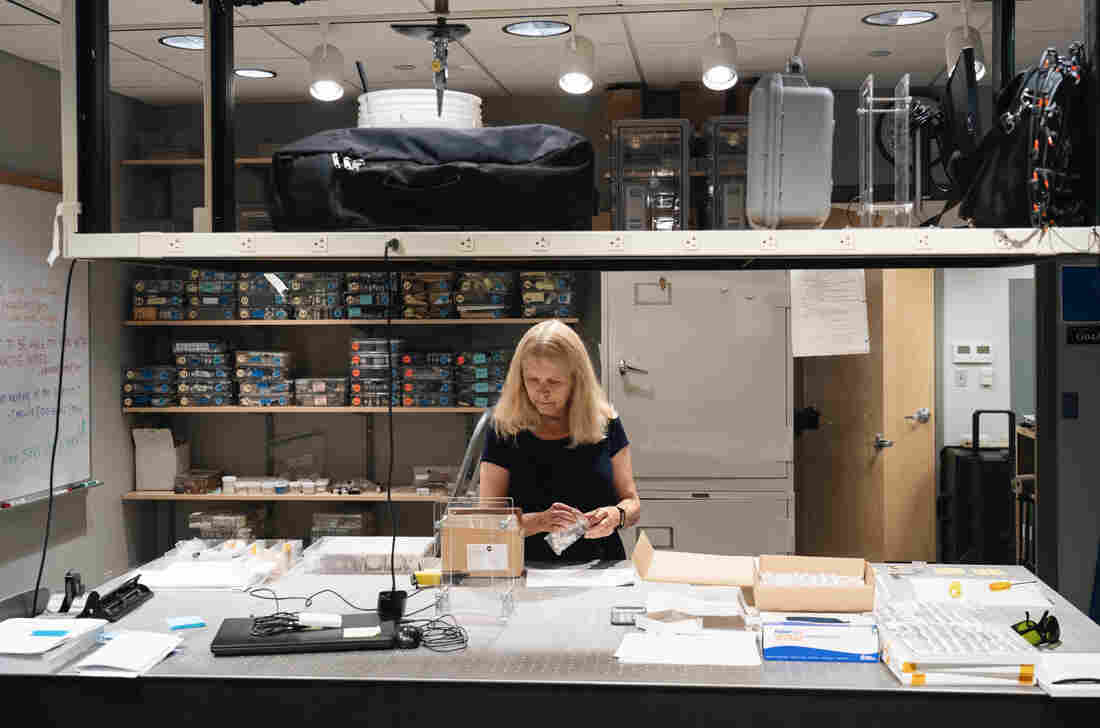 Dyar is chair of the astronomy department at Mount Holyoke College, where she studies all kinds of lunar samples. Kieran Kesner for NPR hide caption

As NASA Aims For The Moon, An Aging Space Station Faces An Uncertain Future

She sometimes marvels at how far the study of lunar materials has come over her lifetime. These days, technology lets her do measurements on a speck of moon dust smaller than a grain of salt.

"Scientists are creative people, and we're always looking to use the newest, latest technology that we have to go back and look at something that we've looked at before," Dyar says. "Just as I am looking at these lunar samples still — and again, 40 years later."