Accessibility links
'Opportunity Zones' Touted By White House May Benefit Investors Most Opportunity zones were created with the 2017 tax cut to bolster low-income communities. But depending on how the funds are spent, investors who get tax incentives could see the biggest gains. 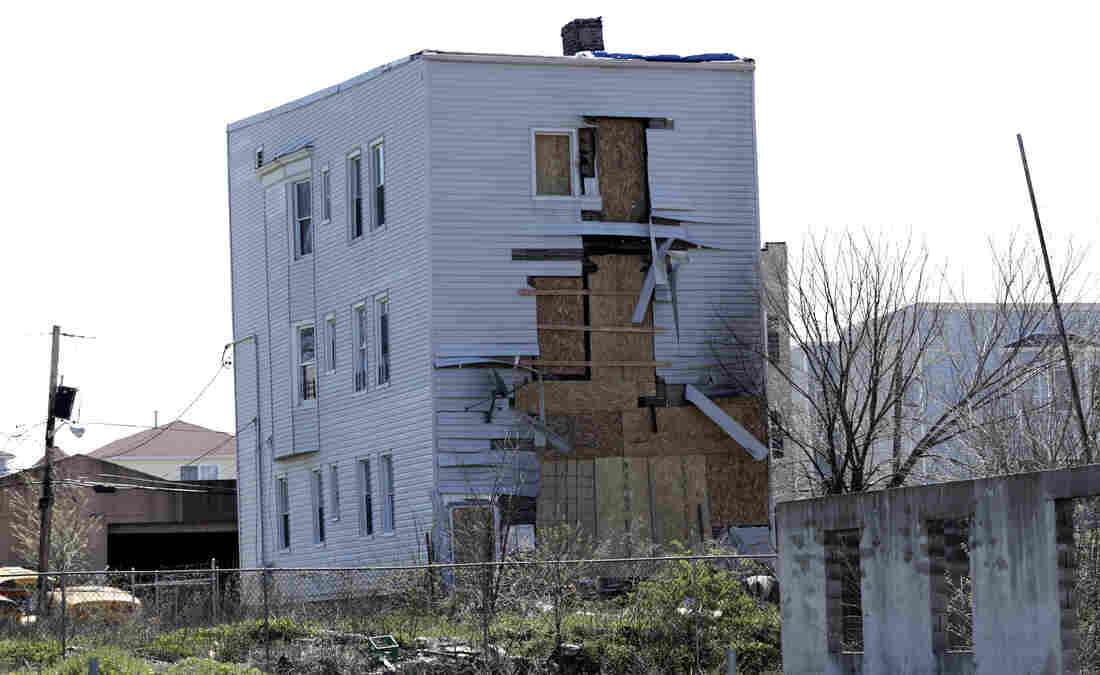 A building in Newark, N.J., stands near a construction site in a so-called "opportunity zone" in April 2018. The program to spur investment in low-income communities originated in the 2017 tax law. Julio Cortez/AP hide caption 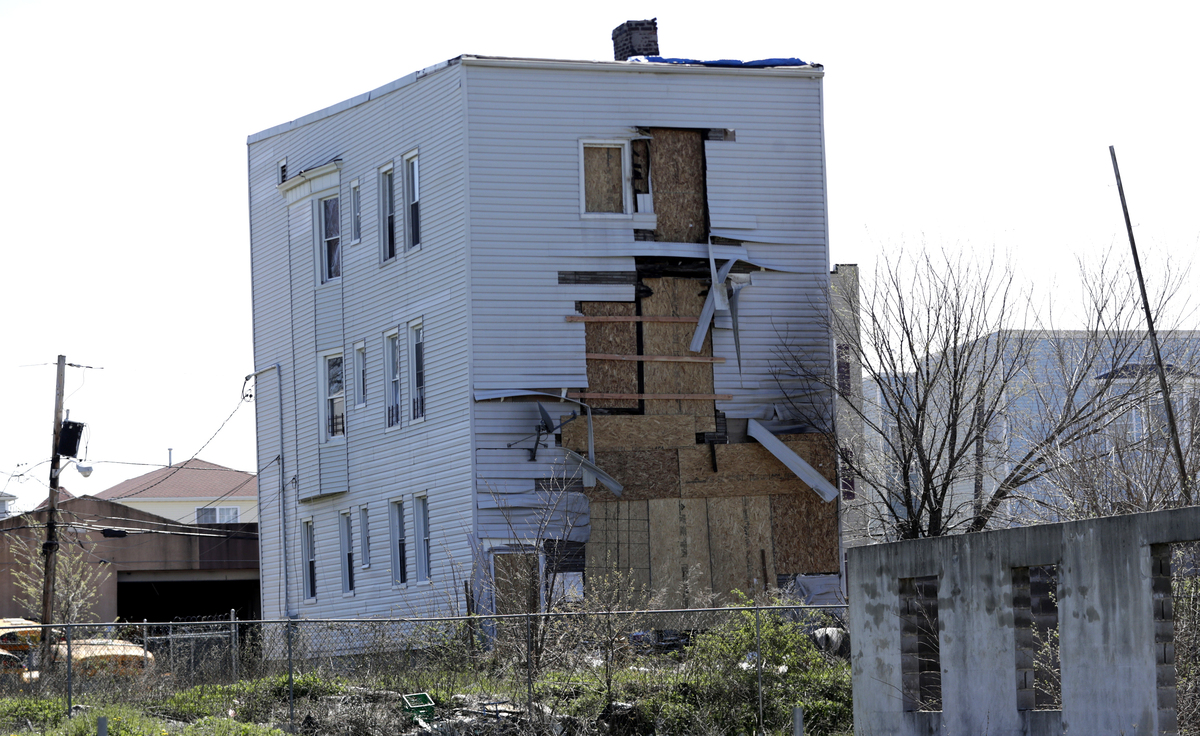 A building in Newark, N.J., stands near a construction site in a so-called "opportunity zone" in April 2018. The program to spur investment in low-income communities originated in the 2017 tax law.

Tucked into the 2017 law intended to cut Americans' taxes was a program aimed at helping communities struggling with high unemployment and run-down housing.

What's not clear is who's actually getting the most assistance from it.

The program allows investors to defer and potentially lower their capital gains taxes in exchange for investing in designated low-income neighborhoods.

But critics of the "opportunity zones" say residents in those communities actually may be harmed, rather than helped, because wealthy investors getting tax breaks could enjoy more of a benefit than local residents.

Supporters of these zones on both sides of the aisle say they are creating jobs and making a difference in places that might otherwise be left behind.

President Trump often refers to the program when talking about what his administration has done for struggling rural and urban communities — and as a part of his outreach to black Americans.

The policy has also been championed by lawmakers such as Sen. Tim Scott of South Carolina — the only black Republican in the Senate — and Sen. Cory Booker, a black New Jersey Democrat running for president.

White House officials said something was needed to help parts of the U.S. that aren't enjoying the same levels of economic success.

"We spend billions of dollars a year on economic development programs. Yet, you still have communities that look the same way since the riots [of 1968] or some places that have been rust belts for the last 40 years," said Ja'Ron Smith, deputy director of the White House Office of American Innovation.

Smith, who helps lead the White House efforts on the zones and other domestic policy matters, told NPR that the zones help cities and towns draw on private-sector investment in an innovative way.

But the federal law does not specify how those funds should be used; investors might build affordable housing — or they might build high-end apartment buildings.

In other words, some fear, the government's attempt to spur development in poor neighborhoods could wind up pushing out poor people to make room for more expensive new developments. 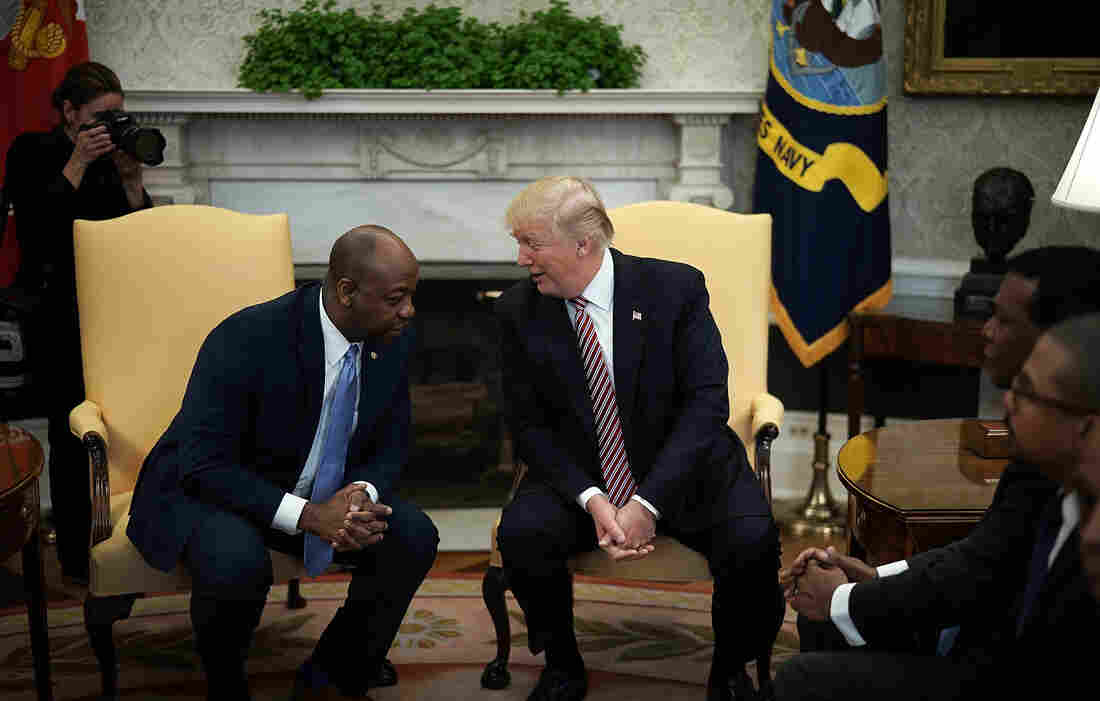 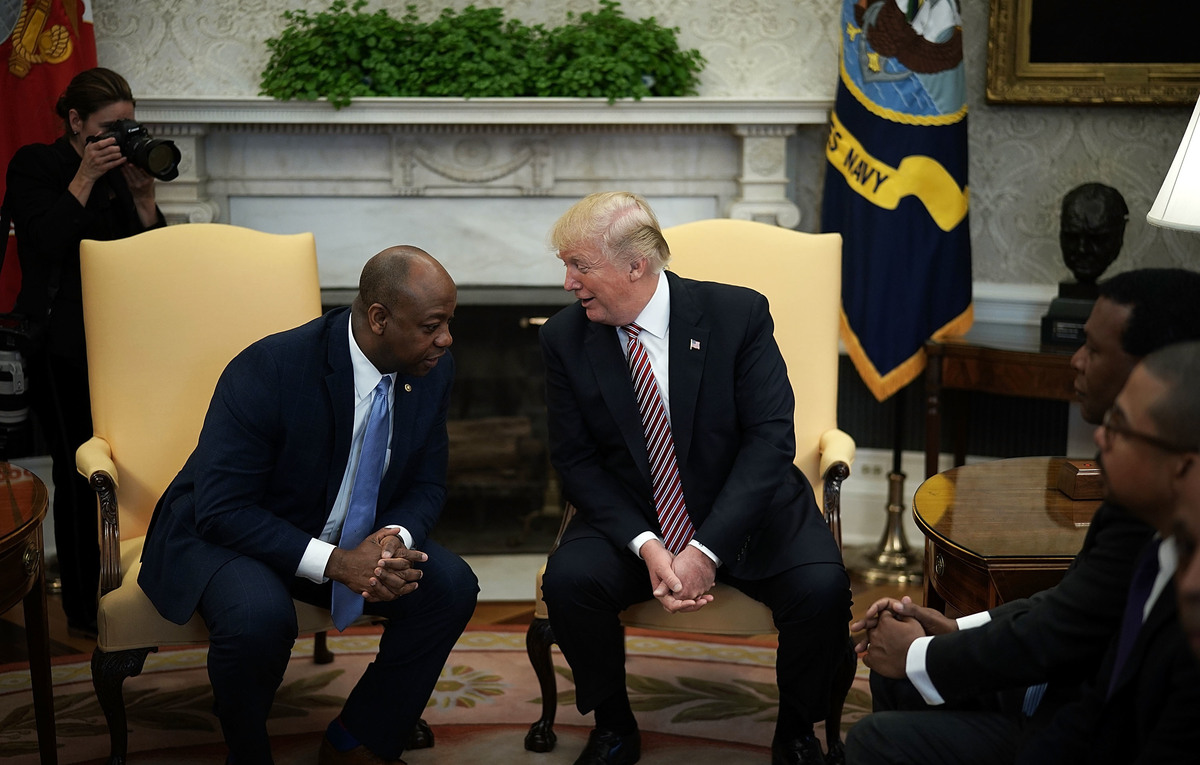 President Trump speaks to Sen. Tim Scott, R-S.C., during a working session on opportunity zones in the Oval Office in February 2018.

Opportunity zones are a new spin on an old concept.

"Enterprise zones," which started in the United Kingdom and came to the U.S. in the 1980s, were meant to take a different approach to impoverished areas.

"Prior to the 1980s, [the approach] was to look at very poor areas and essentially send the bulldozers in the village and eradicate old buildings and in many cases actually change the population and try to turn areas around like that," said Stuart Butler, one of the conservative scholars credited with bringing the concept of "enterprise zones" to the U.S.

Are We Even Close To Full Employment?

With enterprise zones, though, the goal was to make it easier for people living in these neighborhoods to start businesses of their own and provide tax incentives for people who take the risk of investing.

States began adopting their own versions of enterprise zones, and in 1993 Congress authorized creation of "empowerment zones." Under the empowerment zone program, local governments competed for a mix of grants and tax incentives.

Backers of opportunity zones argue that the new zones created by the 2017 legislation are very different from their predecessors.

Butler, who is now with the Brookings Institution, agrees with that sentiment, but he's concerned that the new program has gone too far with its incentives.

"It's attracting the wrong kind of investment — large-scale investment which may lead to far greater gentrification and removal of people rather than the original intent of the enterprise zone idea," Butler said.

Under the tax law, governors are allowed to designate up to 25% of low-income census tracts in their state as opportunity zones.

Investors can defer their capital gains taxes through 2026 by putting their profits in opportunity-zone funds that invest in these communities.

Depending on how long investors keep their money in the funds, they can lower their tax burden and potentially not pay any capital gains taxes on money made from the funds.

The concern voiced by some critics is that these rules create more of an incentive for wealthy people to focus on their own profits than the needs of those in the opportunity zone.

"People who were going to invest anyway are now getting a tax break and maybe you're going to get shifting of investment from outside of the zones to inside of the zones," said Timothy Weaver, a political science professor with the State University of New York at Albany who has studied these types of programs. "In either case what you're likely to see are rents going up for everybody."

The White House's Smith said these criticisms are off base.

Smith said the program was intentionally designed to give local governments flexibility to tailor policies toward the needs of their specific communities.

Although some cities — such as Washington D.C. — have seen new investment in poor neighborhoods that displaces people who were living there, that isn't taking place everywhere, he said.

"Gentrification is not something that's happening in every city. It's not happening the Mississippi Delta, right? Housing is very affordable down there. So for us to create an economic development tool that tries to fix a problem that only hurts some urban areas? That's not smart," Smith said.

The White House has also set up a council to help target federal housing grants and other funds specifically for the zones.

Shay Hawkins, a former aide to South Carolina's Sen. Scott, helped craft the zones measure that was included in the tax law. He is now the head of trade group representing opportunity zone funds.

"We did not want to go one-size-fits-all. We really wanted to provide the broad strokes to get the capital there and to make sure that capital is productive in the zone," Hawkins said.

Still, skeptics like Weaver said it was unclear whether the zones will truly spur new investments, especially in areas that were already on a upswing.

"The overall problem with this whole approach is that by reducing taxation on the very wealthy, there's not the mechanism by which you're going to actually help poor people," Weaver said. "It's essentially an application of trickle down economics in its crudest form to poor areas."

One area where both critics and backers of the policy agree is the need for more information about the impact of the zones.

Reporting requirements were included in the original measure, but were stripped out of the final tax bill.

Hawkins' trade group is planning to eventually release some data from members and the Trump administration is looking at what type of information it can gather on the zones.

Also, bipartisan bills have been introduced in Congress that would impose reporting requirements and force the government to track whether benefits are actually flowing to the communities that are in need.

The next question is when or whether they might pass — and how soon investors and officials might learn more about what this money is achieving.