Accessibility links
'Hawking' Profiles The Ever-Fascinating Scientist — Minus The Nefarious Equations There's little to surprise in this story, especially if you know a bit about the subject's life and his ideas. But author Jim Ottaviani finds a nice balance between the personal and the theoretical.

'Hawking' Profiles The Ever-Fascinating Scientist — Minus The Nefarious Equations

'Hawking' Profiles The Ever-Fascinating Scientist — Minus The Nefarious Equations

There are some people who can look at complex equations — this one, for example:

... and get lost in them. Where we ordinary folks see a mishmash that evokes the hopeless feeling of wrestling with 12th-grade calculus, these remarkable people see galaxies. Exploding stars. Time itself. (Or, in this case, happiness.) The ability to peer into an equation and find a framework for the universe is a rare one, an enviable one, and one that's provoked persecution throughout history. For proof of this, simply envision the nerd who aced your high-school calc class, then had to dodge jocks' thuggish intimidation on his way through the halls. 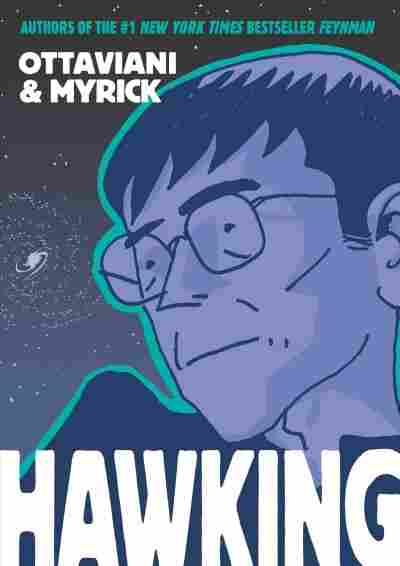 It's really a fascination with that nerd's uncanny ability, and not pity for the disabled or an interest in innovative approaches to quantum mechanics, that inspires so much popular attention toward Stephen Hawking. The physicist, who passed away last year, was dealt a devastatingly ironic fate. Given the ability to sail across the stars with math, he had virtually every other ability taken away from him — even the ability to communicate his ideas without the help of a machine. It's no wonder so many people have ventured to pick up A Brief History of Time, watched one of the movies about Hawking, or guessed at the details of his love life. If you were diagnosed with motor neurone disease, as he was in 1963 at the age of 21, what would you find inside your head to dazzle your imagination?

Just as it's enlivened countless pop-sci attempts to explicate Hawking's theories, this question provides the emotional and thematic core to Jim Ottaviani and Leland Myrick's new graphic novel. There's little to surprise in Hawking, especially if you know a bit about the subject's life and have a spitting acquaintance with his ideas. But Ottaviani finds a nice balance between the personal and the theoretical, making this a diverting account despite the familiarity of Hawking's biography. Ottaviani has been writing graphic novels about scientists since 1997, telling the life stories of such figures as Alan Turing and Richard Feynman. Along with managing to explain — sans equations — why we should care about black holes and pocket universes, he relates Hawking's life without becoming either sensationalistic or mawkish. 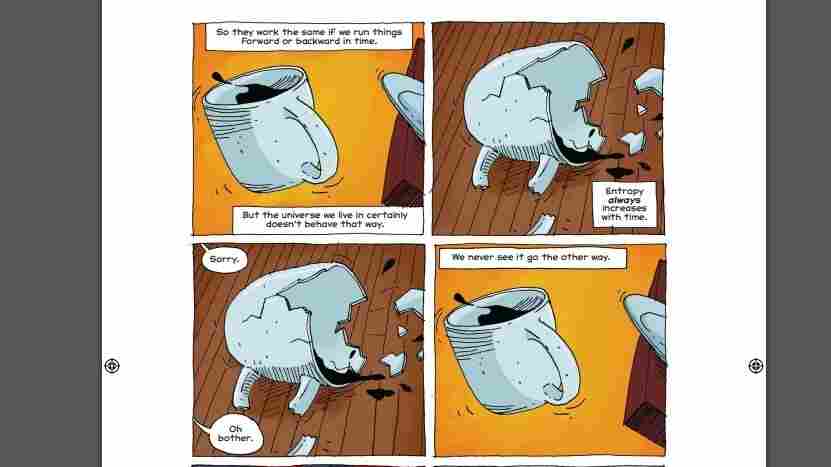 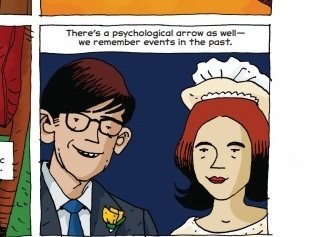 Page from Hawking by Jim Ottaviani and Leland Myrick.

Ottaviani and Myrick were invited to create this book by Hawking himself, and the story is told in his voice. Even so, Ottaviani doesn't omit the unlovely aspects of Hawking's personality and private life. While he skates over the details of Hawking's marital troubles, only indirectly alluding to the '90s rumors that his second wife abused him, this restraint feels appropriate. It's offset by a frank, nuanced treatment of his first wife's experiences. Jane Hawking had to bear huge burdens over the course of their 25-year marriage, not only due to Hawking's condition but because of his obsession with his work above all else. Even before his symptoms became incapacitating, he preferred chewing over physics problems with colleagues to spending time with family. 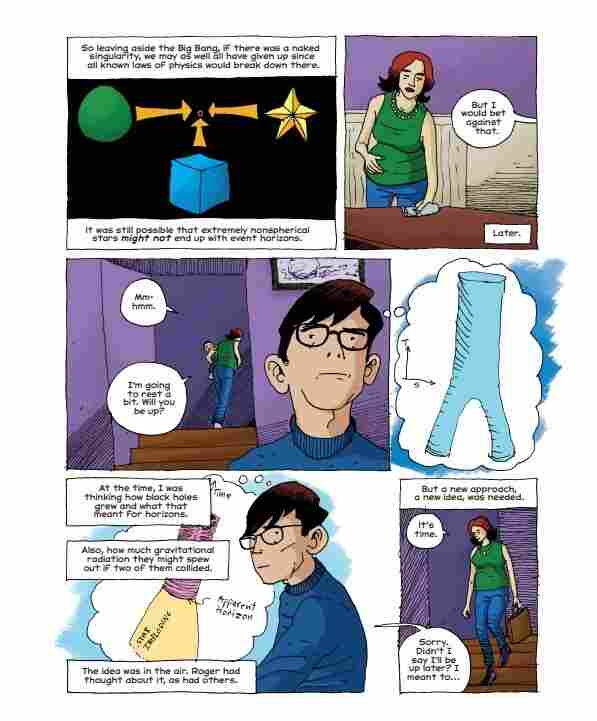 We also see a man who was fascinatingly ambivalent about how he wanted the world to see him. This ambivalence was evident in how he dealt with both his career and his disability. Though he wrote A Brief History of Time to be "the kind of book sold in airports," he found it hard to boil down his theories for the general public. "There are equations on virtually every page. You must assume every equation halves your sales," one of his editors tells him. Hawking also shied away from those who wanted to dramatize his life without focusing on his ideas. And throughout the book he refrains from sharing his emotions about his condition, making light of it when he can. When he gets a new voice synthesizer, he says, "The bad news is, it gives me an American accent."

Ottaviani conveys all these layers with delicacy. The same can't be said of Myrick's art, though. Although he does a lovely job illustrating Hawking's theories, his drawings are workmanlike otherwise. It's a real letdown for a narrative that manages to interweave emotional moments with speculations about imploding stars — while omitting all those nefarious equations.

Admittedly, aside from a lot of physics, Ottaviani doesn't really tell us what was going on inside Hawking's head. But he does prompt us to reflect on what we've got going on in our own.