Accessibility links
As Greek Economy Remains Limp, Voters Oust Leftist Leader For Center-Right As their economy continues to flag, Greeks turn to the center-right and a more conservative leader. Four years after Greece nearly left the European Union, a new prime minister has been sworn in. 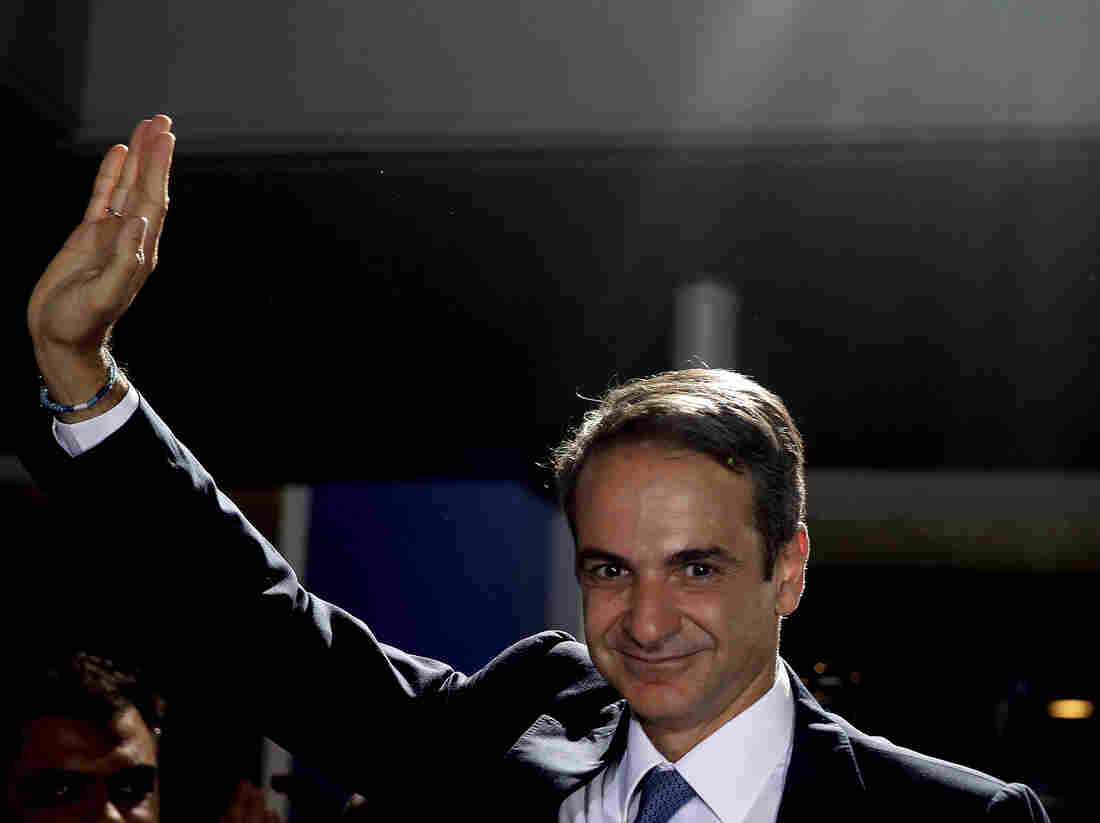 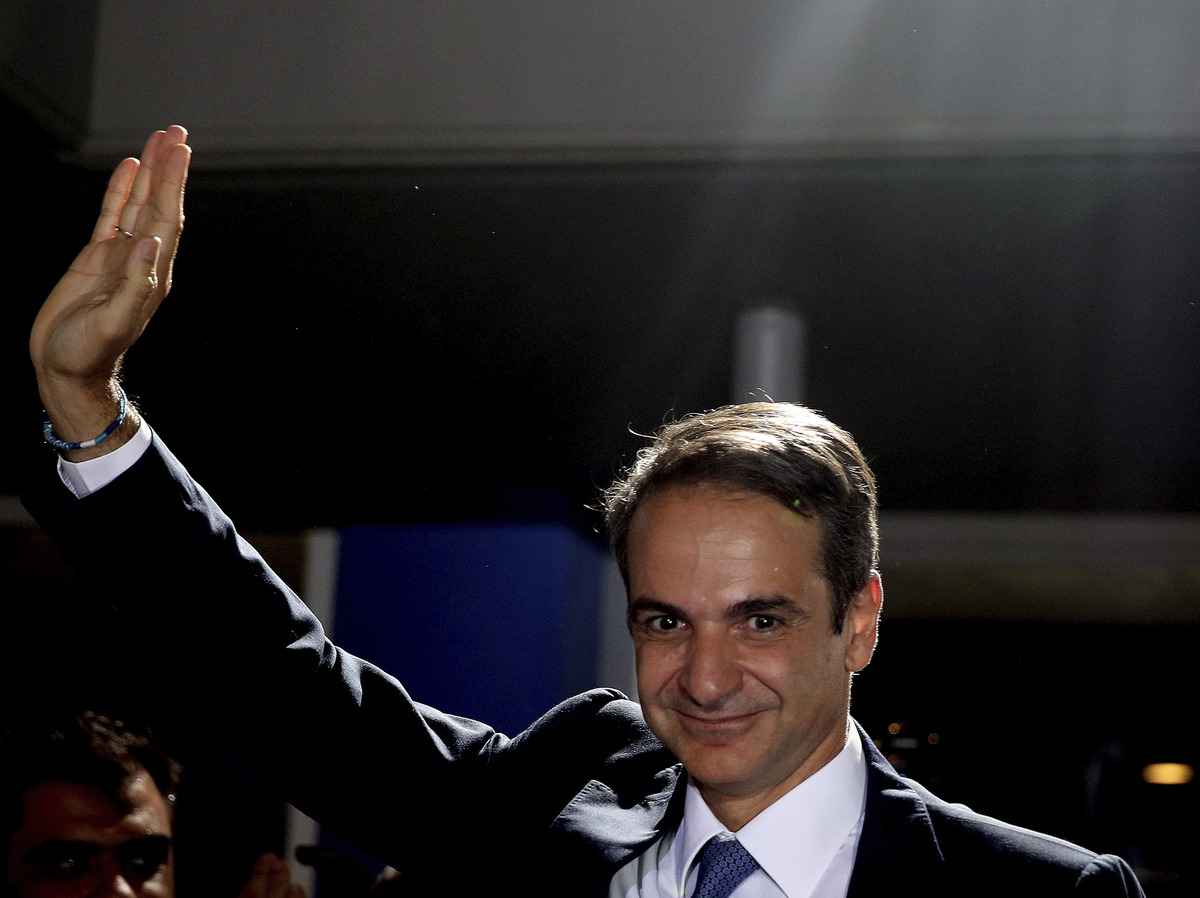 Greek opposition New Democracy conservative party leader Kyriakos Mitsotakis waves to his supporters after a win in parliamentary elections at the New Democracy headquarters in Athens on Sunday.

Greeks elected a conservative party led by the scion of a powerful political dynasty in national elections on Sunday, a rejection of the country's left-wing government seen as being too slow in improving the economy after a long financial crisis.

"The Greek people gave us a strong mandate to change Greece," Kyriakos Mitsotakis of the New Democracy party told reporters shortly after he was sworn in as prime minister on Monday. "I'm confident we will rise to the challenge."

Mitsotakis' win for the center-right New Democracy party, which has been a fixture of Greek politics for decades, cuts against a recent trend of Europeans favoring populist nationalist parties and euroskeptic candidates.

"Mitsotakis proved more adept than his political rivals, even within his own party, at realizing that after nine years under economic adjustment programs, Greeks wanted to look forward," says Nick Malkoutzis, editor of the political analysis website MacroPolis. "They wanted to hear about how their country might change for the better, rather than rehash old arguments about who was to blame for its demise."

Just a few years ago, Greeks blamed their demise on New Democracy and another establishment party, the center-left Pasok, run by its own political dynasty. In late 2009, the Pasok government revealed that the country was deeply in debt. Greece was shut out of international markets, forcing it to seek bailout loans from the European Union and the International Monetary Fund. In exchange for those loans, the EU and IMF enforced punishing spending cuts and tax hikes that pushed the Greek economy into a depression. The rest of the world portrayed Greeks either as lazy spendthrifts or impoverished victims.

Syriza won elections in 2015 on the promise that they would end dynastic politics and endemic corruption and stand up to the EU, which Tsipras declared was bullying Greece. But Syriza soon caved in to EU demands for more austerity and oversight.

This is the first election since Greece came out of three international bailouts.

Greek voters blamed Tsipras, 44, for taking too long to restart the country's troubled economy. Some are also angry at him for agreeing to a name-change deal with north Macedonia. (Many Greeks insist that the name "Macedonia" belongs to Greece.) But the Macedonia deal and a willingness to negotiate with EU leaders also won praise for Tsipras, on the international stage.

Tsipras called snap elections hoping to drum up support for the Syriza party after its poor showing in elections for the European parliament in May.

Instead, they opted for New Democracy and its leader Mitsotakis, 51, a Harvard-educated former banker and McKinsey & Co. consultant who is offering a rebooted version of establishment politics but "with transparency and meritocracy," as he told supporters Sunday night. He's an unlikely messenger for change. His late father, Konstantinos Mitsotakis, was a former prime minister. His sister, Dora Bakoyannis, is a former foreign minister and Athens mayor. His nephew, Kostas Bakoyannis, is the mayor-elect of Athens.

Mitsotakis promised he would focus first on cutting taxes and creating jobs. His message isn't groundbreaking, says Malkoutzis, the analyst, but "it seemed in step with the public mood for more positivity and less misery."

"Greeks deserve better, and the time has come for us to prove it," Mitsotakis said on Monday night. He also told supporters that he wanted Greece to be strong and self-confident and that it will "claim in Europe what it deserves and not be a beggar or poor relative."

With all votes counted, Mitsotakis and his party, New Democracy, secured nearly 40% of the vote and 158 seats in the 300-member parliament, according to the Greek interior ministry. Syriza won about 32% of the vote.

Former Syriza finance minister Yanis Varoufakis, an economist and international media darling, won a seat in parliament as part of MeRA25, the Greek wing of his pan-European party, DiEM25.

Meanwhile, the neo-Nazi party Golden Dawn, which also rose from obscurity during the crisis, did not win enough seats to return to parliament, which it first entered in 2012 using violence against migrants and threatening those who opposed them as enemies of the state. Its members are currently standing trial on charges including murder and money laundering.