Accessibility links
So You've Become A Rabid Fan Of Women's Soccer. Now What? The crowd broke into chants of "Equal pay!" after the U.S. Women's National Team won the World Cup on Sunday in Lyon, France. Fans have a role to play in making that happen. 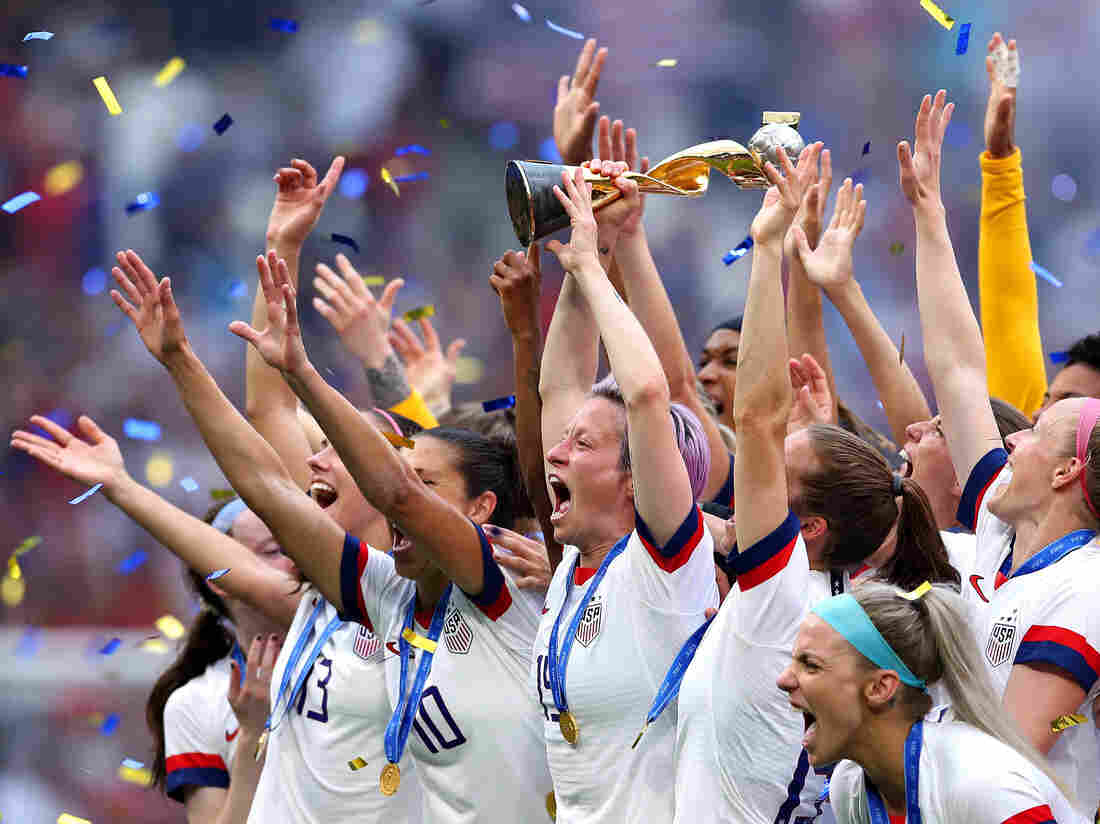 Megan Rapinoe and the U.S. squad won a lot of fans on their way to winning the Women's World Cup on Sunday in Lyon, France. For the sport to keep growing, that support needs to continue long after the ticker tape lands. Alex Grimm/Getty Images hide caption 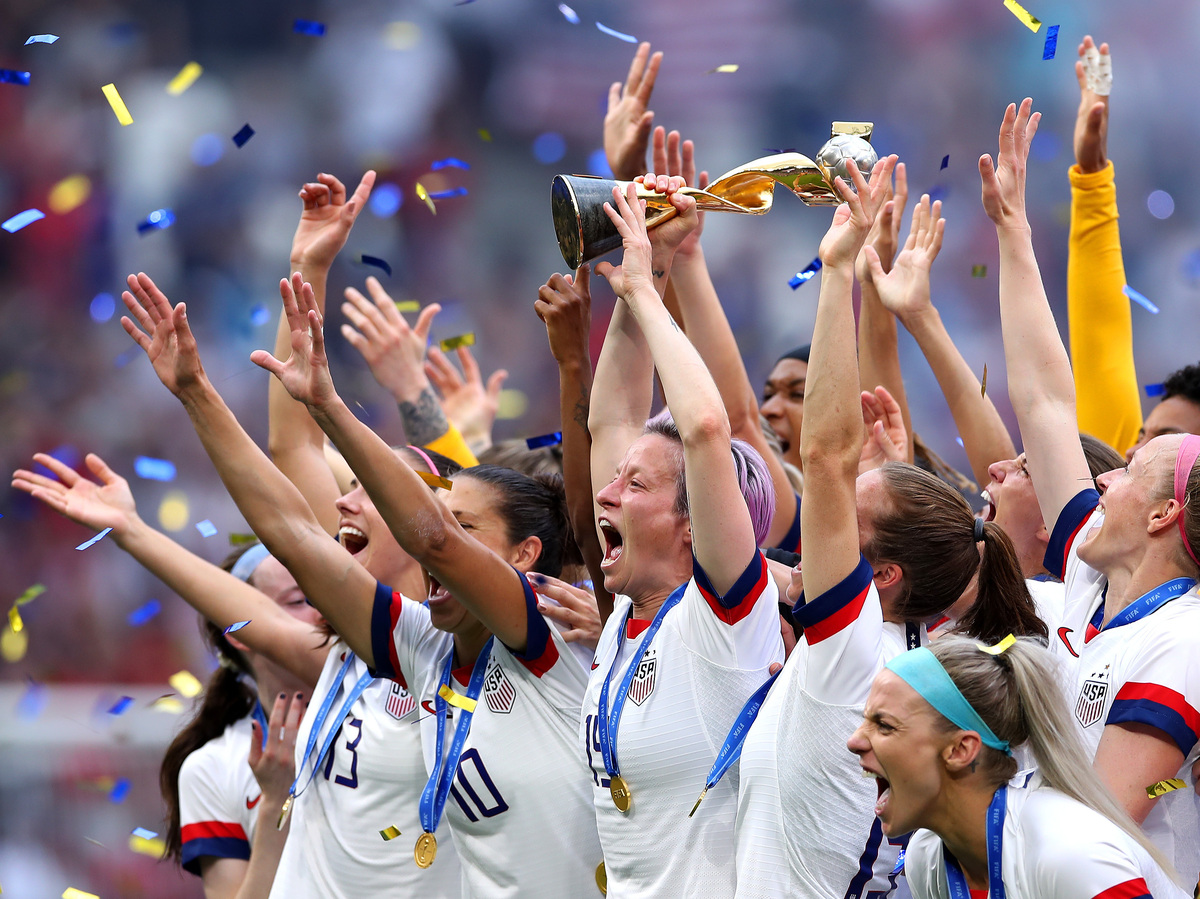 Megan Rapinoe and the U.S. squad won a lot of fans on their way to winning the Women's World Cup on Sunday in Lyon, France. For the sport to keep growing, that support needs to continue long after the ticker tape lands.

You cheered when Megan Rapinoe scored that ice-cold penalty shot. You spilled your coffee as you celebrated Rose Lavelle's incredible left-footed strike. You got misty watching that stirring new Nike ad. And when you saw the U.S. team members hoist the World Cup trophy over their heads on Sunday, you felt their joy as your own.

Congratulations! You are now a U.S. Women's National Team fan, if you weren't one already.

When the U.S. won the Cup on Sunday, the crowd broke into chants of "Equal pay!" And fans like you have a role in making that happen.

So what can you do? Here's your guide to helping the sport and its players to prosper.

Catch the champions on their victory tour

The World Cup champions will play a series of games in at least four U.S. cities as part of a barnstorming victory tour. Sites and dates haven't yet been announced. But first, they'll be feted with a ticker tape parade on Wednesday morning through the streets of Manhattan, where New York Mayor de Bill Blasio will present them with the keys to the city.

Go to NWSL games (this one really matters)

Every member of the U.S. Women's National Team plays in the National Women's Soccer League. Good news: The league's season is less than halfway through — meaning that in short order, the players you watched tear up the field in France are players you can watch in real life.

Some of the NWSL's teams are thriving — the Portland Thorns, in particular, enjoy a fervent following. The team attracted an average of nearly 17,000 fans a game last year. Researchers have studied what they say is the Thorns' world-leading popularity and found that the fan culture was the No. 1 reason people loved going to matches. Excited fans beget more excited fans.

One benefit of having a small league is that most teams have a number of national team players. You can catch standouts from overseas, too: Australian superstar Sam Kerr plays for the Chicago Red Stars and is the league's all-time leading scorer. Canadian legend Christine Sinclair plays for the Thorns, alongside Tobin Heath and Lindsey Horan.

Many of the teams play in small suburban stadiums that aren't super accessible by transit. The Washington Spirit, featuring Rose Lavelle and Mallory Pugh, play at the Maryland SoccerPlex, about an hour northwest of D.C., with a seating capacity of just 4,000. But the Spirit will play two upcoming matches at D.C. United's gleaming new Audi Field, which seats 20,000 on the District's waterfront.

One reason the USWNT has been fighting so hard for higher salaries is that women's pro soccer in the U.S. doesn't pay well. For the 2019 season, the league's maximum player salary is $46,200, while the minimum is just $16,538. The more tickets, merchandise and sponsorships that NWSL teams sell, the more its player salaries can rise.

Fan support is crucial to sustaining the league. Both the Boston Breakers and FC Kansas City ceased operations in the past two years. And the NWSL is built on the ashes of two previous women's soccer leagues that folded, including one that was founded amid the excitement of the U.S. win at the 1999 World Cup.

Watch them play on TV

Another way to generate more money for women's soccer is to watch it on television or via streaming online. The USWNT and NWSL make money from ads shown during their games, and the bigger the audience for each broadcast, the more often such games will be televised. And if viewership grows, networks will opt to show more games on flagship channels rather than obscure cable offerings.

Big news on this front was announced last week: ESPN will broadcast 14 upcoming NWSL matches on its ESPN2 and ESPNEWS channels, and they'll be streamed on its app, too.

Keep the pressure on FIFA and the U.S. Soccer Federation

Chants of "Equal pay!" resounded in the stadium after the U.S. clinched Sunday's final in Lyon, France. And everywhere from Twitter to Congress, "Pay the women" has become a curt directive to the U.S. Soccer Federation as the players' lawsuit against their employer moves into mediation.

FIFA President Gianni Infantino says he intends to double the investment in women's soccer over the next four years and double the prize money for the winners of the next Women's World Cup — but that still won't shrink the gap because the men's purse will also grow.

"If you really care about each game in the same way, are you letting the gap grow? No," Rapinoe said Saturday. "Are you scheduling three finals on the same day? No. Are you letting some federations play two games in the four years between each tournament? No, you're not."

While no one would call FIFA or U.S. Soccer especially transparent organizations, they absolutely rely on fan and sponsor support. Tell them you care about the women's game. Tell them to pay the women.

Live abroad? Support women's soccer where it needs it most

The success of the USWNT is a direct result of the investment that has been made in women's sports in America.

One enormous factor is Title IX, which requires athletic departments at schools and colleges to fund women's sports as a condition for receiving federal financial assistance. Another factor is that pay gap notwithstanding, U.S. Soccer does an admirable job of supporting and funding the women's team.

Many players elsewhere are not so lucky. The teams in Jamaica and Thailand, for example, are reliant on the largesse of a single donor to support their squads in the absence of adequate funding from the national federations.

The opportunities to help these teams are enormous — whether it's making a donation, going to watch a pro or college match, or coaching a girls team.

If the millions and millions of people who tuned in to this World Cup each do one or two items from this list, the 2023 tournament will be even more spectacular than this one.

A previous version of this story incorrectly said Reign FC are based in Seattle. The team relocated to Tacoma, Wash., this year.