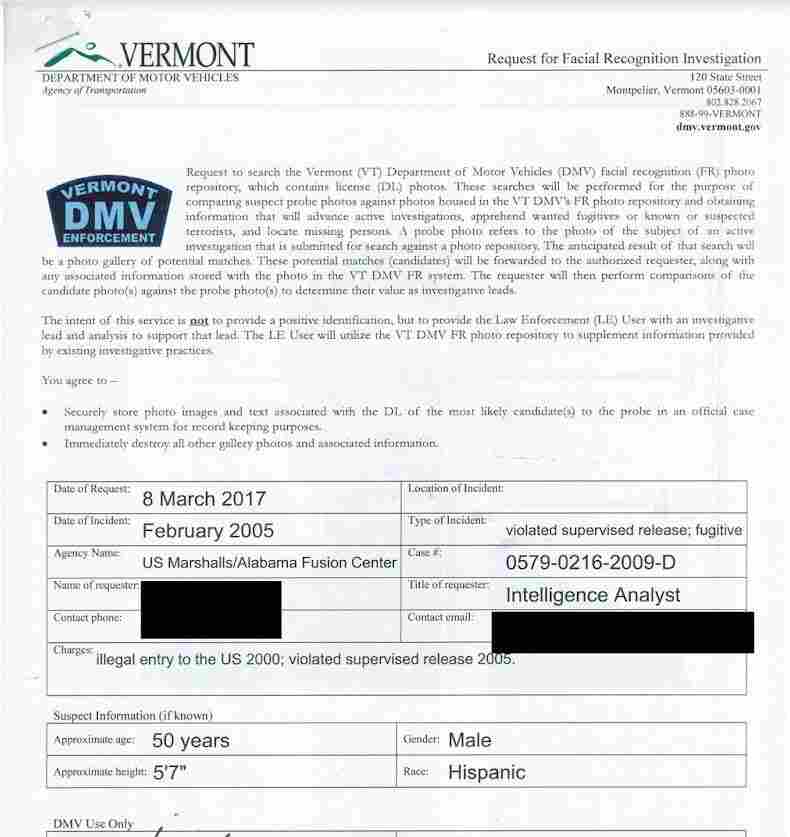 In many cases, federal agents can request access to state DMV records by filling out a form. This is an example of a Homeland Security request that was made to the Vermont Department of Motor Vehicles in 2017. Georgetown Law hide caption 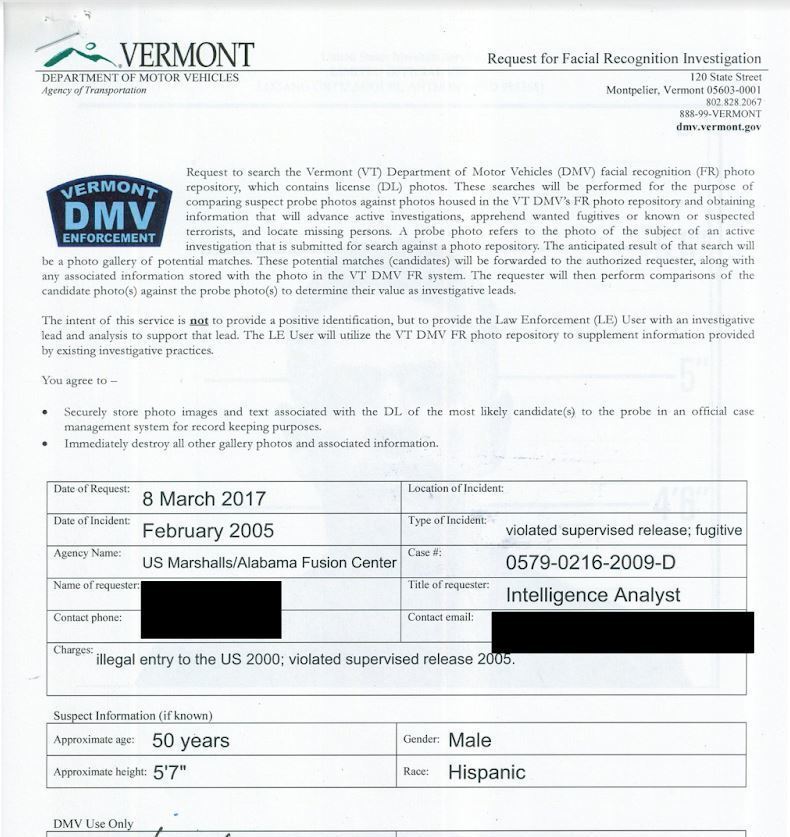 In many cases, federal agents can request access to state DMV records by filling out a form. This is an example of a Homeland Security request that was made to the Vermont Department of Motor Vehicles in 2017.

Immigration and Customs Enforcement agents mine millions of driver's license photos for possible facial recognition matches — and some of those efforts target undocumented immigrants who have legally obtained driver's licenses, according to researchers at Georgetown University Law Center, which obtained documents related to the searches.

Federal agencies have not gotten congressional approval to use state DMV records as a massive database, says Alvaro Bedoya, the founding director of Georgetown Law's Center on Privacy & Technology. He adds that the searches often take place without state residents' awareness or approval.

In some cases, Bedoya says, ICE has used facial recognition to sift through data in states that have urged undocumented immigrants to obtain driver's licenses.

"In our view, this is a scandal, and huge betrayal of undocumented people," Bedoya tells NPR's Morning Edition. His group received the official records through Freedom of Information Act requests made to police departments and DMV offices around the country.

More than a dozen U.S. states allow undocumented immigrants to get a formal license or driver privilege card. In at least three of those states — Washington, Utah and Vermont — ICE agents are "actually taking advantage of that to secretly find and deport those people using face recognition technology," Bedoya says.

In response to an NPR request for comment, ICE officials sent a statement saying the agency "will not comment on investigative techniques, tactics or tools." It adds that ICE has the ability to collaborate with other local, federal and international agencies "to obtain information that may assist in case completion and prosecution efforts."

The ICE statement concludes, "This is an established procedure that is consistent with other law-enforcement agencies."

News of ICE's use of facial recognition software to sift through state databases was first reported by The Washington Post, drawing on documents collected by Bedoya and his team. His colleagues include Clare Garvie, who says via Twitter that in Utah, federal access was granted despite the Legislature's explicit stance against such practices.

"The Utah legislature rejected the federal info-sharing required under the REAL ID Act as 'inimical to the security and well-being' of the state and 'adopted in violation of the principles of federalism,' " Garvie wrote on Monday.

Similarly, on the Vermont Department of Motor Vehicles page about its driver privilege card, the agency highlights the fact that it "is NOT Real ID compliant."

Facial recognition can be particularly dangerous, critics such as Garvie and Bedoya say, because recent studies have found the technology both unreliable and biased, putting people at risk of being falsely connected to a crime or investigation.

"I think it's really important for folks to realize that even if you're not undocumented it does affect you," Bedoya says, "because the software is biased and doesn't really protect or find people of color, women or young people really well."

"The question isn't whether you're undocumented — but rather whether a flawed algorithm thinks you look like someone who's undocumented," Bedoya says.

Lawmakers from both parties have raised concerns about the accuracy of recognition systems and the lack of privacy restrictions that would prevent federal agents from mining state databases. Responding to the Georgetown Law report, Rep. Brian S. King, D-Utah, said via Twitter, "It is not OK that the Utah state DMV officials turned over data to ICE to help set up a surveillance system."

King added, "I'll be joining with legislative colleagues to get answers about how this happened. I'm sure our concerns will be bipartisan."

As for the authorization or permission federal agencies need to get before they can use facial recognition to search driver's license photos, the process often involves filling out a request form, according to a review of about a dozen state documents Georgetown Law shared with NPR. While some records referred to an administrative subpoena, none mentioned a search warrant.

"What happens is that ICE takes advantage of a two-decade-old law that says that in general, DMV should cooperate with law enforcement," Bedoya says. "And this law was written before face recognition existed. ICE uses it to ask that the DMVs comply. And the DMVs do so — usually in secret and without telling the people in the state."

In a follow-up email, Bedoya said of the administrative subpoena ICE uses to request the search, "This is not a court order or a warrant, this is just ICE saying that they have the authority to ask for this search, and then asking for the search."

ICE is not the only federal agency to be scrutinized for applying face recognition software to state driver records.

One month ago, the House Oversight Committee quizzed an FBI official about the agency's use of face recognition to mine state databases. That hearing followed a report from the Government Accountability Office that said the FBI's face recognition office can search the databases of 21 states, with more than 641 million photos.

After hearing Goodwin's testimony about the GAO's report, Rep. Jim Jordan, R-Ohio, said that it was time "for Congress to act to protect Americans' liberties."

In that hearing, the GAO's Gretta Goodwin, director of its homeland security and justice unit, mentioned that the GAO had faulted the FBI's handling of face recognition and privacy concerns in May 2016 — and that out of six recommendations the GAO made, the FBI had fully addressed only one.

A key complaint, the GAO said, was that the FBI had still not taken steps "to determine whether state database searches are accurate enough to support law enforcement investigations."

Long before facial recognition became an option for investigators, law enforcement agencies routinely shared booking photos and fingerprints from criminal records. But after decades of that practice, the FBI started to institute a "next generation" system in 2010 that could include biometric data such as face recognition, the GAO said.

The GAO also described an FBI unit called FACE Services, which can draw on databases run by federal and state agencies. While earlier face-recognition collaborations used photos from within the criminal justice system, the GAO said, "these external systems primarily contain photos from state and federal government databases, such as driver's license photos and visa applicant photos."

Outlining how FACE Services works in that same House oversight hearing, the FBI's Kimberly Del Greco said the unit uses software to generate "potential candidates" that are then manually compared with the original search photo. Del Greco, the deputy assistant director of the FBI's Criminal Justice Information Services, said that the face recognition analysis that results from the process "does not provide positive identification, but rather, an investigative lead" that is assessed by FBI agents.

FACE Services "has performed 390,186 searches on a variety of databases only in support of active FBI investigations with no findings of civil liberties violations or evidence of system misuse," Del Greco said, citing an internal audit that was completed last December.

Only in limited instances, Del Greco said, does the unit assist other federal agencies with face recognition.