Accessibility links
Dapper Dan, Telling Stories In Leather, Fur And Logos The legendary hip-hop designer is now partnering with the big fashion labels who originally shut him down for bootlegging their logos. He's got a new memoir out, called Dapper Dan: Made in Harlem. 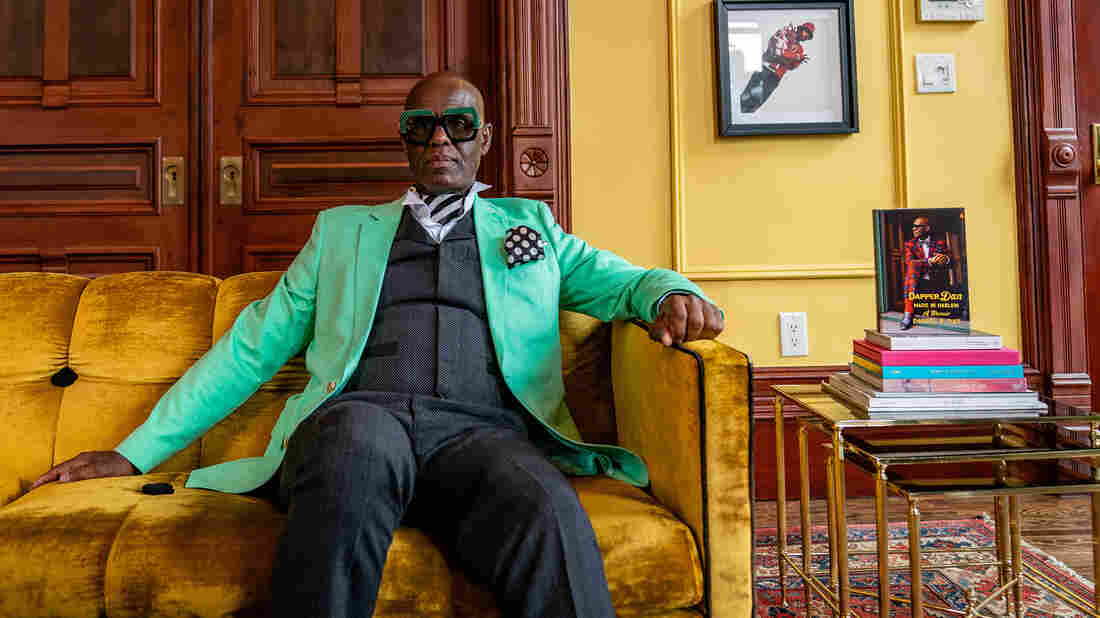 "I consider myself one who creates clothes, and fashions clothes, and uses it as a vehicle to fashion young minds," says clothier Dapper Dan. Jelani Day/Dapper Dan of Harlem hide caption 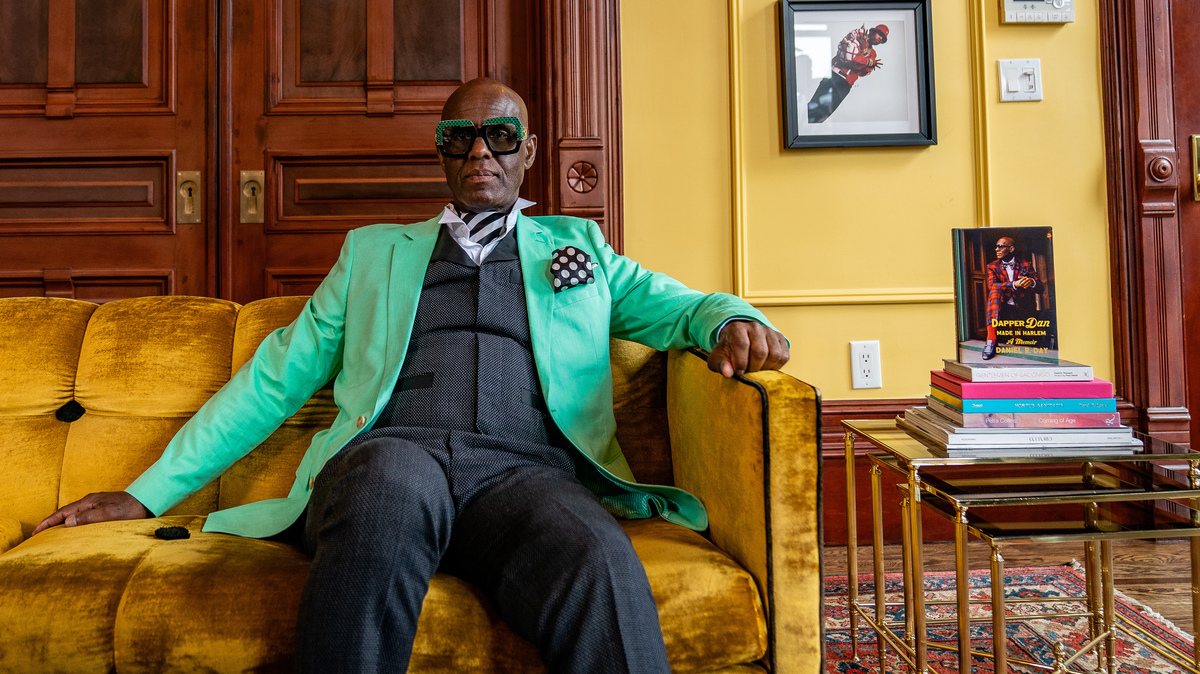 "I consider myself one who creates clothes, and fashions clothes, and uses it as a vehicle to fashion young minds," says clothier Dapper Dan.

It's summer in Harlem. It's blazing hot. But that hasn't stopped Dapper Dan from holding court on the street in front of his atelier, greeting people as they pass by.

I met up with him to talk about his new memoir, Dapper Dan: Made in Harlem, about his journey from hustler to respected taste-maker and businessman. Today he's wearing a pastel green suit jacket over a couture vest and matching pants that he designed himself for the European fashion giant Gucci. "This is fine polka dot, Gucci loafers, semi-loafers they call them," and yes — those are gold moths on the back. 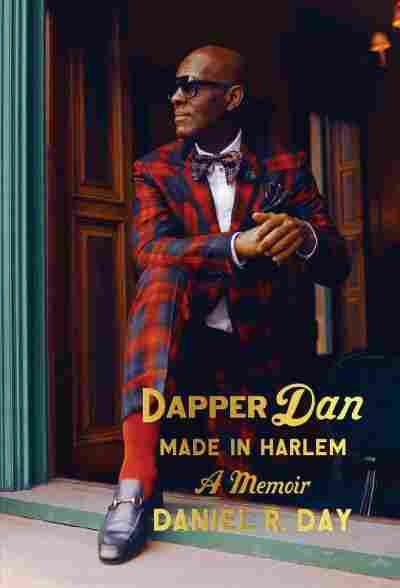 Made in Harlem: A Memoir

Dan says these daily greetings are important to him. "The cheapest jacket I have inside is $2700. So the people in my community I know cannot afford that, so I make sure I stand outside and engage them everyday."

Now, Dan's selling jackets for nearly three grand — but when he was a kid, here in Harlem, his family didn't have that kind of money. He tells a story in his book about shopping for an Easter suit with his father: "We went to Ripley's department store. I was gonna get my first suit. I think I was in eighth grade, seventh or eighth grade and we went to Ripley's department store. I saw a charcoal brown suit with pinstripes. I loved it, and my father was going to give it to me, right? We were gonna get it on credit, cause we couldn't pay cash. We didn't have the money," Dan remembers.

When I started seeing designer bags, I said 'Wow.' Just imagine — if I can have them walking around looking like that bag, I could change the whole game.

"And so I said, 'Daddy, let me see the contract.' And I read the contract and figured out the mathematics. And I said, 'Dad, you're gonna end up paying two and a half times what this suit is worth.' I said, 'Don't get it, Dad.' And we came on out the store, and on the way down the steps my father stopped me, and he said he said 'Boy, don't you know you can read? Boy, you could read!' You know? And I'm looking at my father's face, you know and the intensity of his face, right? Then it all came back to me cause my father only went to the third grade and he had to teach himself to read. So everything I've encountered, I know that I could read my way out of it."

He never did get that Easter suit. "I got a better suit," he says. "I got something that suited me for life. So I'm glad. That's one suit I'm glad I didn't get."

Dan is partners with Gucci now — the fashion giant struck a deal with him in 2017 — but when he was making clothes in the '80s, he wasn't asking permission to use the Gucci logo. Back then, after he'd been making and selling furs for a few years, he noticed a new trend: Designer bags, by brands like Gucci and Louis Vuitton, printed with the labels' logos all over them. And he thought, I can do that. But bigger. "When I started seeing designer bags, I said 'Wow.' Just imagine — if I can have them walking around looking like that bag, I could change the whole game."

He bootlegged the logo prints and made bespoke suits and dresses, even custom upholstery for cars with the material. The actual clothing labels weren't making anything like it. And so he became a favorite designer for rappers and hustlers, Harlem's black and Latino clientele with money to spend — money the major fashion houses didn't welcome.

I consider myself one who creates clothes, and fashions clothes, and uses it as a vehicle to fashion young minds. That's my goal.

Dapper Dan was the king of hip hop fashion before the labels shut him down in the '90s. The photos on the walls of his atelier tell the story, and one in particular jumped out at me — it's the rapper Rakim, and the legendary Gucci-patterned jacket Dapper Dan made him. "The black leather jacket, black leather plongé with gold colored Gucci G's all over, and trimmed in metallic gold piping, with his name on the back, and his Five Percenter sign. That's a historical jacket. That is probably the most important jacket in hip-hop."

When Dan wants to get into something new, like furs or custom tailoring, he studies — he goes around to manufacturers and learns everything he can. He calls it "sciencing," and he does it over and over again. "Over and over again! And you know what? I find it exciting. Right now, my children think I'm crazy, 'cause I stay on the Internet. They have no clue how important this is to me. I can press a button and get information that I used to have to go into garbage and get. That wasn't revealed to me."

Dan says he had to get into clothing factories, "and find a way to get in there and talk to the owners, talk to the workers ... In addition to that, I would go to the people who made these machines, and people who used these machines, to pretend I was gonna place an order with them, so I could see how they work. And the first thing I would do ... I would shake their hand, look in their eyes and look behind them to see what they're reading, or see what books are on their desk. I would look for information like that. And I would always try to find a person of color that worked there, if I couldn't get the information, then afterwards I'd pay them to tell me something — and if that didn't work, I'd go through their garbage."

Dan doesn't like the word "designer" — but he does like the word "creative." "I consider myself one who creates clothes, and fashions clothes, and uses it as a vehicle to fashion young minds. That's my goal." he says. "I wanna tell stories that tell people's lives, like I make clothes that change people's attitudes about how they feel about theyself. That's it, that's the core of who I am."

Jolie Myers and Christina Cala produced this story for radio, and Petra Mayer adapted it for the Web.