Accessibility links
Tulsi Gabbard On The NPR Politics Podcast: U.S. Needs To Stop Policing The World In an ongoing series, The NPR Politics Podcast is hitting the road and interviewing 2020 Democratic presidential candidates. In this episode, Tamara Keith and New Hampshire Public Radio's Josh Rogers sit down with Hawaii Rep. Tulsi Gabbard to ask about why she's the best pick for president. This series is produced in collaboration with NHPR and Iowa Public Radio. 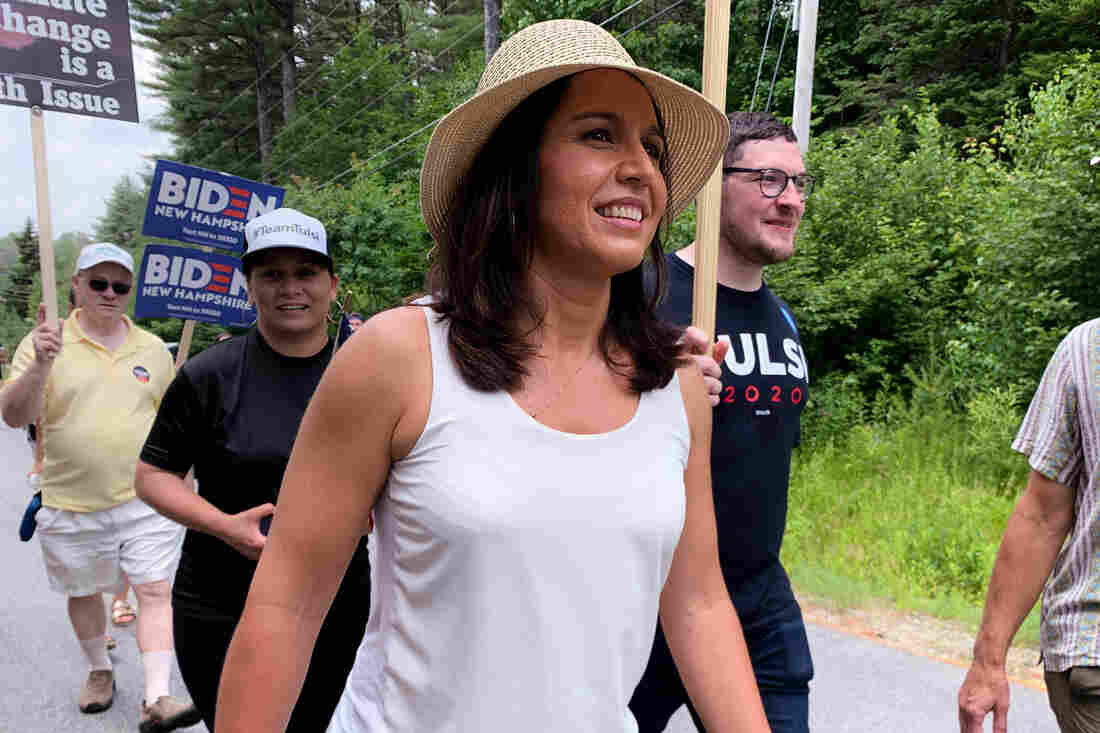 Hawaii Rep. Tulsi Gabbard, seen in Franconia, N.H., on July 6, is one of nearly two dozen Democrats running for president. A major in the Hawaii Army National Guard, she served two tours of duty in the Middle East and says that the experience informed her concern about "wasteful regime change wars." Tamara Keith/NPR hide caption 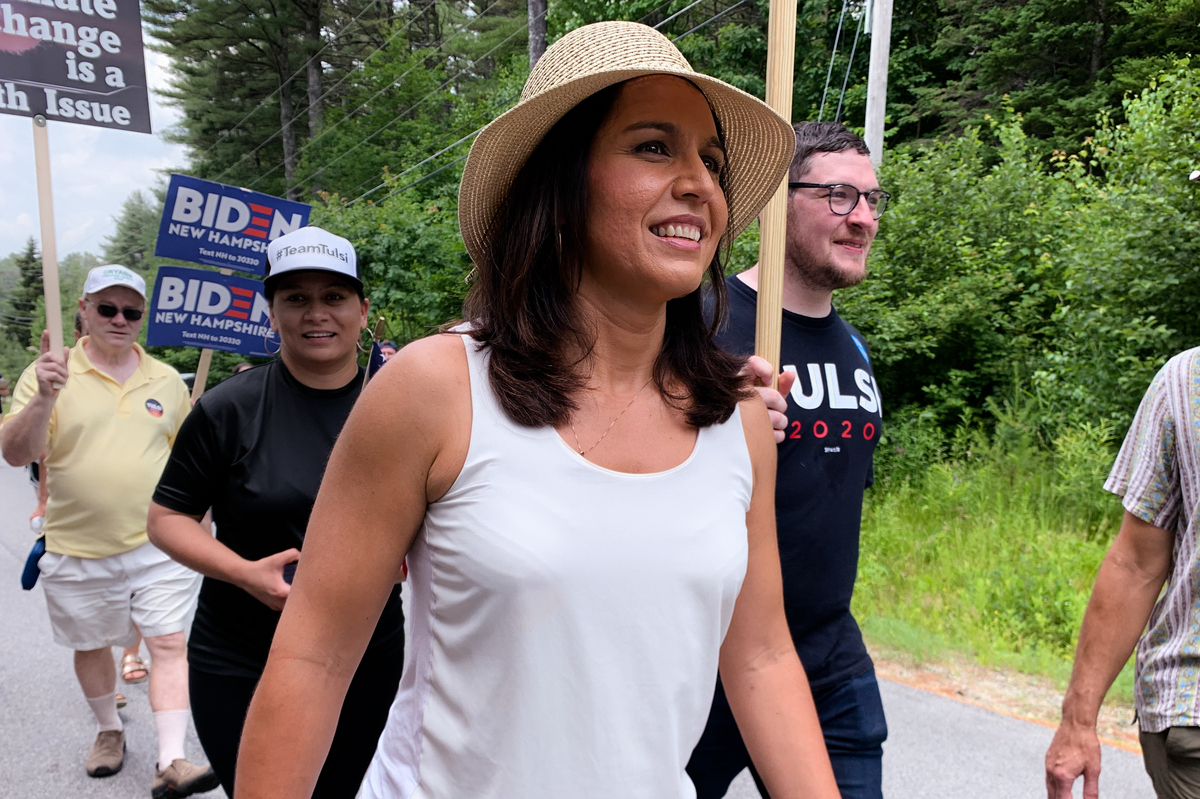 Hawaii Rep. Tulsi Gabbard, seen in Franconia, N.H., on July 6, is one of nearly two dozen Democrats running for president. A major in the Hawaii Army National Guard, she served two tours of duty in the Middle East and says that the experience informed her concern about "wasteful regime change wars."

The most vocal isolationist presidential candidate in the Democratic primary says the United States should "stop trying to act as the policeman of the world."

In an interview with The NPR Politics Podcast and New Hampshire Public Radio for their "On the Trail" series, Rep. Tulsi Gabbard defended her controversial 2017 visit to Syria, where she met with President Bashar Assad even as his regime killed tens of thousands of civilians, some with chemical weapons, in the course of its civil war and displaced hundreds of thousands more.

"Leaders in this country from both political parties looking around the world and picking and choosing which bad dictator they want to overthrow," said Gabbard. "Sending our military into harm's way and then trying to export some American model of democracy that may or may not be welcome by the people in those countries, and it's proven to have been a failure."

The 38-year-old is a major in the Hawaii Army National Guard and served two tours of duty in the Middle East, including in Baghdad in 2005. She said that the experience informed her concern about "wasteful regime change wars."

If there is a "Gabbard doctrine" about when, if ever, the U.S. should intervene overseas, it's clear the circumstances under which a President Gabbard would send U.S. forces are extremely limited. The only reason the U.S. should get involved, she said, is to keep the American people safe. While many presidents have interpreted that mandate quite expansively, Gabbard does not.

Asked if there are any wars in American history that she thinks were justifiable, she named only World War II.

"Unfortunately there are very few examples of this justified use of military force. I think it's very telling that the last time Congress officially declared war was World War II," said Gabbard.

When she talks about wars being costly, she's referring to both the human toll and the fiscal cost. Like candidate Bernie Sanders, whom she endorsed in 2016, Gabbard says domestic priorities could get more funding if not for expensive foreign entanglements.

She also praised President Trump's decision to meet three times with North Korean leader Kim Jong Un, who is responsible for numerous human rights abuses in his own country and has developed nuclear capabilities in violation of international law. Gabbard said she had encouraged then-President Barack Obama to meet with Kim, but it was Trump who actually did. 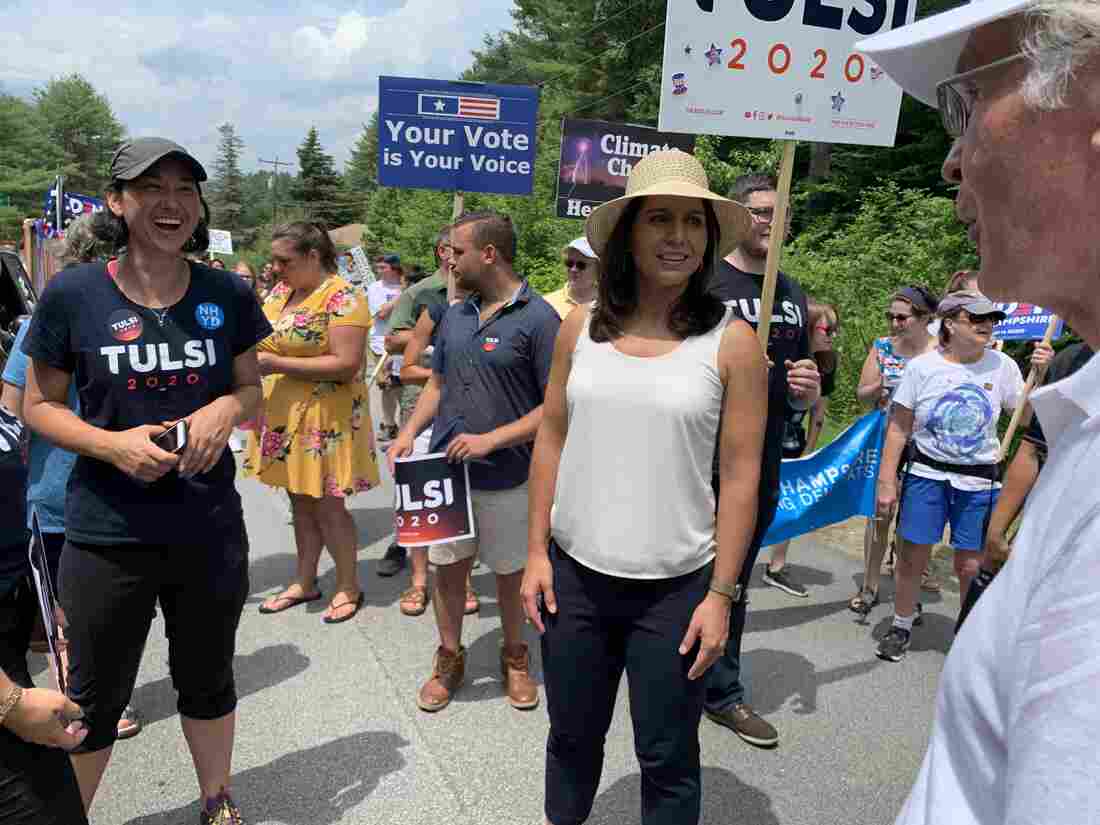 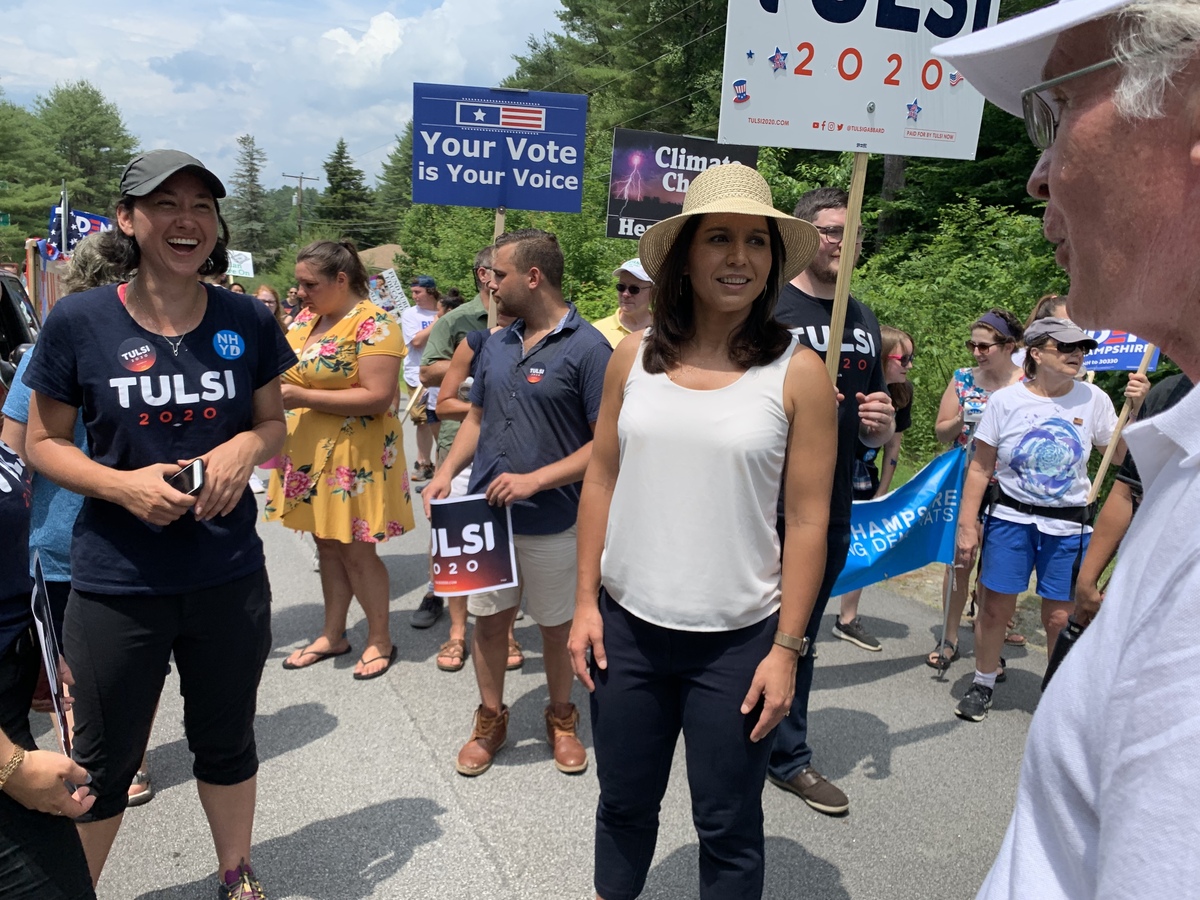 Gabbard speaks to voters in Franconia, N.H., on July 6. Gabbard, a National Guard veteran who served in Iraq, emphasizes to voters her military experience.

"It was a good thing that Trump met with him," Gabbard said, before turning to criticize what Trump has been able to achieve as a result of those meetings. "I think it's seriously problematic that Trump's own foreign policy is undermining any ability for him to actually negotiate a deal with Kim Jong Un. You know, you can't go in and tell Kim Jong Un, 'Hey, we're not going to overthrow you, and we want to make a deal,' while at the same time he's torn up the Iran nuclear agreement and pursuing regime change efforts in other countries like Venezuela and Iran."

In 2017, she expressed skepticism that Assad had used chemical weapons, and in a CNN televised town hall in March, when asked whether Assad is a war criminal, she hedged, saying, "If the evidence is there, there should be accountability."

Asked twice whether she thought Trump should meet with Assad as she has, Gabbard argued that just holding a meeting for the sake of a meeting is meaningless. "The leader of this country should meet with whomever is necessary to pursue peace and the safety of the American people."

Gabbard's views on foreign policy and her willingness to meet with Assad have set her well apart from the political mainstream and her fellow Democratic presidential hopefuls.

At the same time, she has brought in some supporters from outside the party, including libertarians and even figures on the far right.

Although Gabbard has denounced praise she received from Ku Klux Klan figure David Duke, when NPR asked her about praise from far-right figures such as Pat Buchanan, Ron Paul and Steve Bannon, she said: "People from across party lines are coming to our town halls, and they're drawn to the message that I am bringing and the leadership that I'm offering."

What isn't clear is what reasons some of those figures might have for voicing the support they've offered for Gabbard — whether they're authentic supporters or whether they want to put the spotlight on Gabbard because they believe she might cause problems for the wider field or alienate voters.

A young, charismatic congresswoman, Gabbard was once seen as a rising star in the Democratic Party. In 2013, she was elected vice chair of the Democratic National Committee. But she quit that post in early 2016 to endorse Sanders in that year's Democratic primary. She voiced objections with how the party handled the primary process that year and advocated for changes this cycle.

In response to a question about Michigan Rep. Justin Amash's recent decision to quit the Republican Party and become an independent, Gabbard said she wasn't surprised.

"I think that the outsized power that the political parties hold can often be used in the wrong way to squelch our democracy and dissenting voices even within our own party," said Gabbard.

But, she said, she has never considered leaving the Democratic Party.