Accessibility links
NPR Review: 'Monstress: Book One,' By Marjorie Liu And Sana Takeda Marjorie Liu and Sana Takeda's epic, gorgeous tale of a young woman with a monster inside her has won countless awards and been heaped with praise — but does it truly break new ground?

You've Heard 'Monstress' Is Great. But Just How Great Is It?

You've Heard 'Monstress' Is Great. But Just How Great Is It? 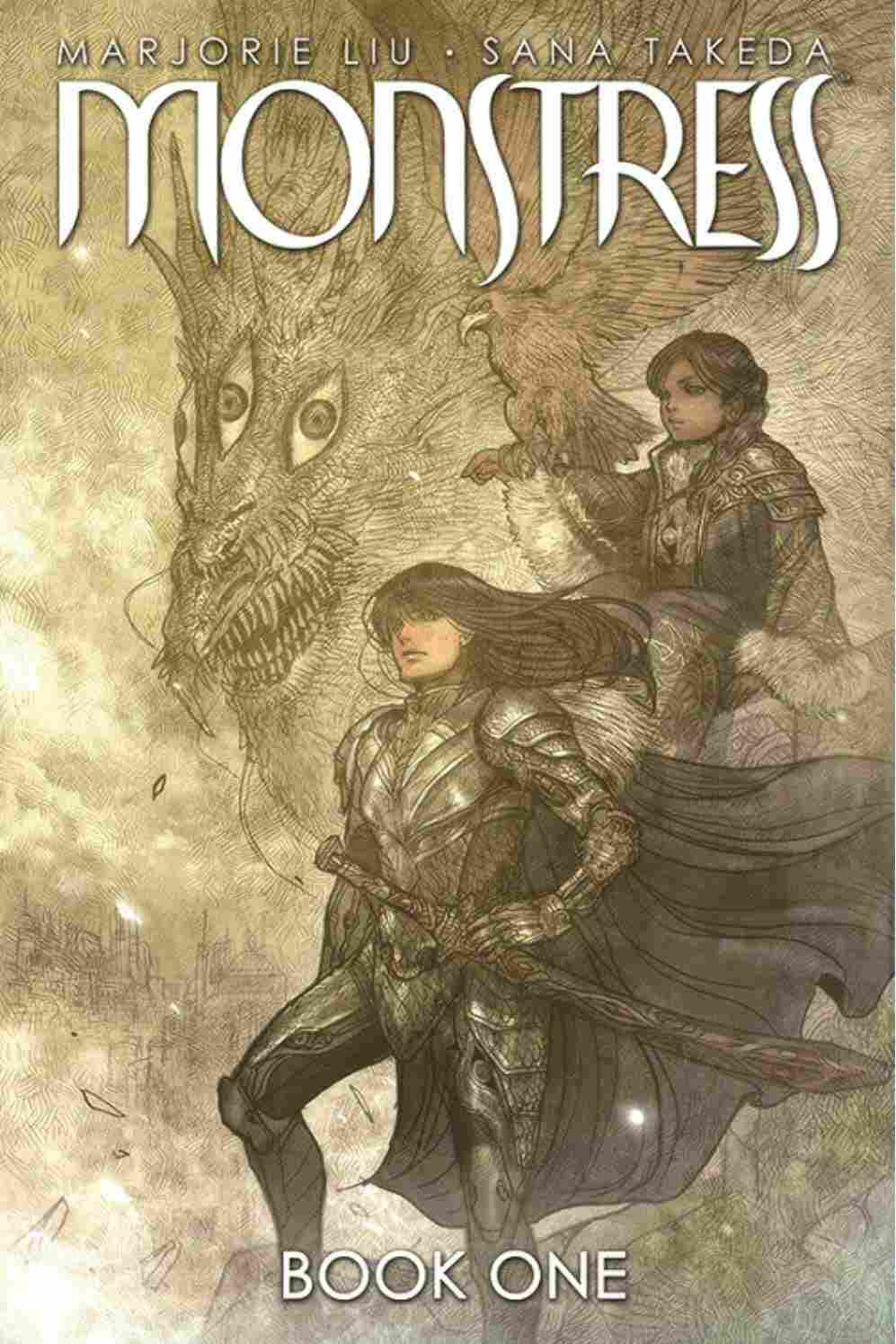 Let's get one thing straight: Monstress, Marjorie Liu and Sana Takeda's wildly successful graphical epic, is great. Yep, "great" is definitely the word to use. No, brilliant. Brilliant, that's what Monstress is ... or is it?

You'd think it would be nice sometimes to have the chance to assess, not just whether a work is great, but precisely what degree of perfection it attains. But since nothing between the covers of Monstress is merely "nice" — chilling, puzzling, engaging and enraging, but definitely not "nice" — it's no wonder that evaluating it doesn't feel like a "nice" task. It feels superfluous, for one thing. From the very first page of this volume, containing issues 1-18, Monstress is so assured, elegant and beautifully drawn that it practically compels acclaim. Not surprisingly, it's piled up a stack of awards — including five Eisners last year — and critics have almost uniformly celebrated it.

So, Liu and Takeda's creation is great. But just how great is it? Is Monstress indeed brilliant? Is it exceptional? Is it genre-defining — or perhaps genre-defying?

It's only when you reflect on that last question that you may start to wonder whether Monstress truly breaks new ground. Otherwise, it's practically impossible to avoid being swept up in Liu and Takeda's alluring vision. Stuffed with intricate myths, dense history, crisscrossing political relationships and magical technology, the world of Monstress is everything a fantasy reader could want. Protagonist Maika Halfwolf, a teenage orphan seeking to solve the mysteries of her childhood, is cranky yet relatable. She's also (in a twist that begs for interpretation) the host of a huge, scary, tentacled being that bursts out of her body at unpredictable times. She struggles to control, and eventually cooperate with, this creature throughout the series.

As Maika travels the land, piecing together her past, she's hunted by the representatives of a host of warring factions. There are the cruel Cumaean witches, the Dusk and Dawn Courts, the enigmatic Ancients and many more. Maika is accompanied by some comic relief: a cute fox girl and a two-tailed feline "nekomancer." Brooding over it all are mountainous forms with huge, unblinking eyes. These are the Old Gods, beings of vast power who've been imprisoned for eons.

Liu's imagination is doubtless formidable — the frozen, looming Old Gods are a particularly rich invention — but as the story progresses, her limitations begin to show. The idea of a teen girl with a monster inside her is a little too spot-on, symbolically speaking. And Liu's most striking innovation never fulfills its potential: She gives most of the different groups female rulers, but never explores the ramifications of this. Male or female, the leaders all act the same; in fact, they start to feel interchangeable as the story churns on and the number of factions grows.

When you're lucky enough to encounter a complex story, winning characters and all that delectable art, it's hard to get hung up on a few flaws — however pervasive they may be.

There's also a certain slickness to Liu's storytelling, a facile balance. Monstress' characters, pacing and themes are, when you stop to think about it, pretty standard for the fantasy genre. But you probably won't stop to think about it — Takeda takes care of that. For page after gorgeous page, Monstress engulfs the reader in layers of masterfully drawn figures, textures and details. In the context of comics, where a few hasty scribbles often carry the whole weight of the reader's imagination, Takeda's compositions are almost dizzying. Her talent, like Liu's, is seductive — it distracts and overwhelms. Only after you've become acclimatized may you begin to notice certain weaknesses. For one, there's a static sameness to many of her female characters. Maika and nearly all the female bosses are annoyingly exquisite. (Could it be that crow's feet and double chins are caused by patriarchy?)

But such shortcomings don't seem like that big a deal stacked against this saga's capacity to engage and absorb. When you're lucky enough to encounter a complex story, winning characters and all that delectable art, it's hard to get hung up on a few flaws — however pervasive they may be. On the other hand, there's still a lot of Monstress to come (Vol. 4, collecting issues 19-24, is out in October). As Liu and Takeda continue to expand upon their achievement, the question is bound to persist: Just how great is it?