Accessibility links
'The Vagabonds' Details The Publicity-Encouraged Road Trips Of Thomas Edison And Henry Ford Jeff Guinn weaves in a portrait of America's burgeoning love affair with the automobile. But his book rests heavy on the men's positive attributes, while shying away from their "unfortunate flaws." 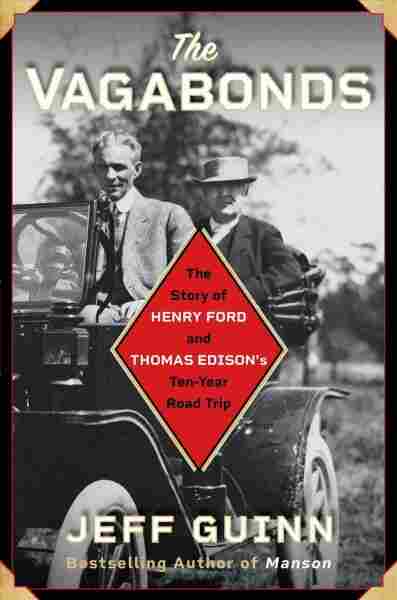 And, together, the brilliant best friends also invented the great American road trip!

OK, yes, that's a stretch. But it's the kind of puffed-up exaggeration the two publicity hounds would have delighted in, as author Jeff Guinn makes clear in his new book The Vagabonds.

The truth? Edison and Ford were friends, for sure, although they were the kind of pals who communicate mostly through their secretaries. And between 1914 to 1924, the two men — along with tire magnate Harvey Firestone and the crotchety naturalist John Burroughs — went on a series of vacations by car.

They weren't the first to take a recreational road trip. But at the time their holiday jaunts began, it was definitely unusual.

Roads were terrible. Accommodations for motorists were nonexistent. Breakdowns were frequent. And garages for repairs? Good luck. Some of the most striking anecdotes in the book come when Henry Ford, captain of industry, borrows tools on roadsides to repair their fleet of cars himself.

In short, any long drive was still an adventure. So road trips starring two of America's most famous business leaders made headlines across the country — which was, in fact, the point.

These were holidays, yes, but they were also carefully planned publicity stunts, carried out before a press corps that followed the men from stop to stop. Ford and Edison on their own were famous enough to command headlines. And like modern Instagram tourists, the "Vagabonds," as they were dubbed, calculated their trips to look great in photographs. Scenes of the men "roughing it," chopping wood or drinking water from a dipper, were posed for the media. (The wealthy Vagabonds received much admiration for their love for the rustic life, while enjoying hot meals prepared by the chef in their entourage and stopping at luxe hotels when weather turned foul.)

The Vagabonds is ostensibly a book about these vacations. But the road trips themselves, alas, are not very compelling. They were exhaustively documented by that army of reporters, and exhaustively researched by Guinn, but all the pandering to the watching press starts to feel a little redundant after a while. The appearance of two sitting presidents barely livens up events.

The trips also don't sound like much fun. Crotchety Burroughs wrote in his journals of landscapes that "offend my eye" and rough drives that left him frequently and painfully "unseated." Thomas' wife Mina Edison describes one trip as "so elaborate and so fussy that there is no charm in it" — a reasonable assessment, given Edison and Ford's determination to tote as many modern conveniences as possible on the road. The preoccupation with performing with the press certainly doesn't sound relaxing.

Guinn waves away those complaints, dismissing Mina Edison as "moping," and asserts again and again that the men enjoyed themselves mightily. Well, maybe so.

But for readers to enjoy themselves, Guinn must focus the bulk of his story around those trips. He considers the merits and failings of the media at the time, with many obliging reporters all too eager to fawn over the celebrity vacationers. He offers a fascinating snapshot of some of the less-famous years of American history, including the xenophobic turmoil of 1919 and the depression of 1920.

Woven into the backdrop of the story is a portrait of America's burgeoning love affair with the automobile. Gasoline goes from being sold by the bucket to offered in roadside service stations. Towns struggle to accommodate legions of vacationers before the rise of the motor hotel (better known now as the motel). And facing an acute parking shortage, downtowns across America rip out the trees that line their main streets and replace them with pavement.

Those threads are all well worth the read. But Guinn himself seems most interested in charting the rising and falling personal and business fortunes — and in the case of Ford, political ambitions — of the two men.

And it's here that the book falls short. The Vagabonds portrays all Ford and Edison's flaws, from minor peccadilloes to monstrous bigotry, in the warmest possible light.

A prominent example, of course, is Ford's anti-semitism, advanced ceaselessly not only in person, but through a newspaper he used as a mouthpiece for spreading anti-Jewish propaganda. When Guinn finally addresses it, he waves it away, hastening to note that at least Ford was not actively opposed to women's suffrage, and willing to hire "some" black men in management roles. As for Jews, Guinn writes that Ford was "typical of his times" — even as the book describes friends and colleagues recoiling at the virulence of Ford's anti-semitic tirades.

On one road trip, Guinn writes, as Ford and Edison were companionably chatting about the evil Jewish conspiracy behind all the world's evils, Firestone protested and left. He and Burroughs, Guinn speculates, must have "accepted that antisemitism was an unfortunate flaw among the many positive attributes of their two famous friends."

The entire book lays those positive attributes on heavily, and shies away from "unfortunate flaws." Guinn is blasé about Edison's eagerness to claim credit for the inventions of his underlings, and seems set to make episodes of out-and-out rudeness seem like great fun for all involved. His book is filled with riveting accounts of megalomania and hypocrisy, but always explained away or promptly countered by some glowing description.

It's the kind of laudatory coverage you'd expect from the adulatory press of the Vagabonds' own era. But it's a century later. Can't we admit that "great men" are far more interesting with their baggage than without?

Camila Flamiano Domonoske covers cars, energy and the future of mobility for NPR.

Read an excerpt of The Vagabonds