Accessibility links
'The Book Of Collateral Damage,' By Sinan Antoon, Accounts For Baghdad's Losses The novelist and poet Sinan Antoon, raised in Iraq and now living in New York, returned home following the 2003 U.S. occupation. That experience inspired his new work of fiction. 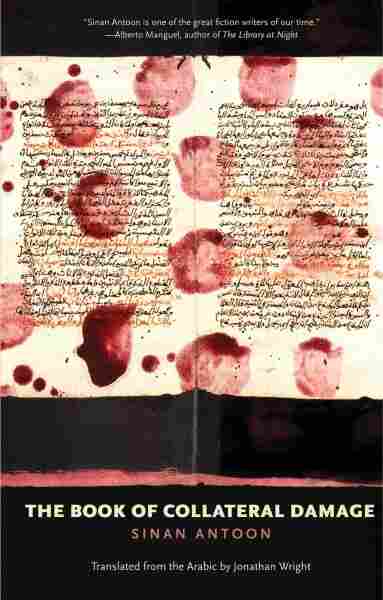 The Book of Collateral Damage

by Sinan Antoon and Jonathan Wright

The novelist and poet Sinan Antoon grew up in Baghdad, Iraq — a city that's known many years of sorrow.

He was born to an Iraqi father and an American mother, and lived there until 1991. That was the year of the first U.S. invasion of Iraq, when he hid in the basement of a restaurant as U.S. bombs fell.

Antoon later moved to New York. But after the United States bombed Baghdad again in 2003, and took over Iraq, Antoon went back to make a documentary film.

He stayed at a hotel, since its generators guaranteed electricity with which to recharge the filmmaking equipment. Staying at a hotel also emphasized that Antoon was no longer at home in his hometown — that Baghdad had changed through years of sanctions and war.

"Because of all of the upheaval of the last two, three decades, almost 4 million Iraqis left Iraq," he says in an interview. "So when I went back to Baghdad, all of my relatives had left to various countries, and many of the friends of my generation had left. And to go to your hometown and stay at a hotel — meaning you don't have any close friends or relatives that you could stay with — it's still odd, I think."

In time, Antoon — now a professor at NYU, and the author of several novels and collections of poetry — wrote a work of fiction loosely inspired by his experiences during that 2003 visit. The Book of Collateral Damage, written in Arabic and translated to English by Jonathan Wright, is a story of all that Iraq lost.

On the title of The Book of Collateral Damage

In the imaginary encounter that the narrator has in Baghdad with a strange character who's a bookseller in the famed al-Mutanabi Street in downtown Baghdad (where old, rare and new books are sold) he meets this strange bibliophile who has this project of documenting everything that the war destroys minute-by-minute — and not just human beings, but objects and trees and animals and so on and so forth. And that's the kernel of the book.

But I've always been haunted by this concept of collateral damage, and it goes back to my personal experience. Because the 1991 war, which I experienced after leaving the country and watching how it was covered, and how this concept of collateral damage makes the massive destruction of lives just an abstract concept. And it becomes, as I say in the novel, like a black hole into which humans, lives, houses, objects — entire lives and potential lives disappear.

So "the book of collateral damage" is this project that the bookseller in Baghdad is working on, but it's almost an impossible project because he wants to document, minute-by-minute, everything that gets destroyed. And the objects themselves tell their story, but he never gets beyond the first minute. ... The narrator tells him this requires an institution, and the bookseller tells him there are no institutions anymore, and I'm alone ... it might sound like an insane project, but someone has to do it.

Definitely, it's preservation. It's a creative act. And because one of the bright aspects of the history of our species is the exchange and transmitting beauty from one cultural sphere to another, and it's a deliberate act. And if I had more time, I would do more translation. I also translated my previous novel The Corpse Washer — I translated it from Arabic to English.

On having another person translate this novel into English

Well, in all honesty, the subject matter of the novel is quite intimate, and has a lot to do with my own memories of my home city, and what it means also to be an Iraqi living in the U.S. and watching my new country bomb my homeland. So it's very traumatic. So when Jonathan Wright offered — as soon as the novel came out in Arabic, he offered to translate it — he's an experienced, excellent translator, so I said, "Why not?" ... Because you, as an author, you go and relive all of the events. And these characters that you lived with for two, three years in Arabic, you live with them in English. And it does have an effect on your psyche. And so yeah, I guess I chose the easy way out.

Well, this last one was good, because this was the first time that the concrete blocks [explosion barriers] that had been put in the city by the United States in 2003 were removed. ... After so much destruction and so many terrorist attacks, these walls were removed. So for the first time in many, many years, people could go around the city relatively freely. And the book fair was well-organized, and I was honored to be one of the guests there, so it was a great opportunity to meet so many of my readers and interact with them, and to see so many young people and so many families coming and buying books.

But I should say that what I also saw in Baghdad is that ... there's so much poverty in this country, and there are so many people and young kids who could not even afford to go near the book fair. Iraqis are living in very complicated and very chaotic times, politically. Young people are very eager to improve things and are very critical. So of course, all the discussions were about the past and about the future and what to do — what to do about sectarianism, what to do about corruption. So they're very curious about stories that tell them a different alternative narrative. They want to know more about the collective history and the oral history of their country.

Bo Hamby and Simone Popperl produced and edited this interview for broadcast. Patrick Jarenwattananon adapted it for the Web.