Accessibility links
'Copperhead' Review: Alexi Zentner's New Novel Is Smart And Propulsive Alexi Zentner's new novel follows a high school football star's efforts to separate himself from his racist family. It's an unsparing story about race, class and the limits of individual possibility. 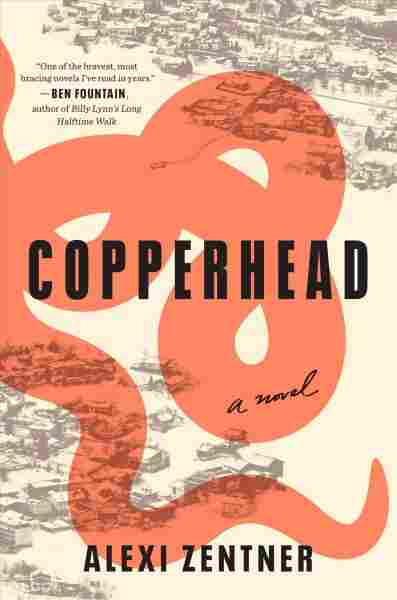 Jessup Collins wants out. The main character of Alexi Zentner's tough new novel, Copperhead, Jessup is a 17-year-old high school football star with a decent shot at getting a college scholarship. That scholarship is essential because Jessup, his mom and his kid sister live paycheck-to-paycheck in a trailer on the outskirts of an upstate New York town that sounds a lot like Ithaca.

Jessup knows that many of his classmates, and even some of his teachers, regard him as so-called trailer "trash," but, what's worse, they assume he's a white supremacist, maybe a Nazi. How could he not be? He wears a camo hunting jacket to school; his family attends the "Blessed Church of the White America"; and his brother and stepfather are serving time in prison for killing two African American college students in a fight. Clearly, Jessup has a lot of family history to outrun.

Copperhead is a smart, propulsive story about racism, class and the limits of individual possibility. It mostly avoids those compromises that socially-conscious novels sometimes feel obliged to make: namely, trading off complexity of character and literary style in favor of "message." Instead, Zentner vividly realizes Jessup's daily world here, from the smell of an approaching snowstorm — "a wet bruise on the air" — to the down and dirty scrimmages of his football games.

Though it's not marketed as such, Copperhead has some of the feel of a YA novel: We see things through Jessup's fraught teenage perspective and the focus of the story is on his clumsy struggle to separate from and, yet, still love his virulently racist family. I can imagine the novel sparking heated discussions in high school English classes, as well as in book groups for the more mature.

The present-time of the novel opens on the night of "the big game," when Jessup's team is playing a rival high school, as sleet is falling. We're told that: "There will be a few kids like Jessup on the [other] team — everywhere, there are boys like him — but mostly the kids from Kilton Valley live in ... four-bedroom homes with gas fireplaces used only for decoration ... , cedar fences to keep the golden retriever in. ... There will be boys on the Kilton Valley team who are already looking forward to getting home before the game has even started, thinking about warming up and drying off instead of the ritualized brutality Jessup loves."

A college scout from Syracuse is in the stands that night, but that game is especially charged for Jessup because his stepfather, David John, has just gotten out of prison and he's in the stands, too. A plumber by trade, David John was a mostly good influence in Jessup's early life, but there was also always a racist edge to his guidance: "Can't be lazy," David John would advise Jessup. "The world ain't what it used to be. You need a college degree to get anywhere now, and they've got all kinds of quotas that you ... don't fit into. ... So study up unless you want to be working knee deep in crap your whole life like me."

David John sports tattoos hidden under his work shirts, the kind of tattoos that proclaim things like "pure blood" and "Rahowa," an acronym for "racial holy war." Those same type of tattoos on Jessup's brother's body ignited the fight that resulted in the deaths of the two black college students. Jessup wishes his stepdad would disappear from his life, but before the night is out he's got more horrific problems to grapple with.

Zentner writes in short chapters — many clocking in around four pages long — that drive the action. As Jessup, the proverbial innocent, finds himself caught up in another racially motivated violent incident, he resigns himself to the fact that, in the eyes of the world, he'll always be implicated in his family's sins. Copperhead is a pretty unsparing story about how one's fate is determined so much by the random luck of one's family, but it's also merciful enough to leave the exit door of reinvention cracked open.