Accessibility links
How Oman Has Become A Key Diplomatic Player In The Middle East Oman has emerged as a quiet facilitator of dialogue, including between Iran and the U.S. "We always keep a focus not on the negative, but on the positive," says Oman's incoming U.N. ambassador. 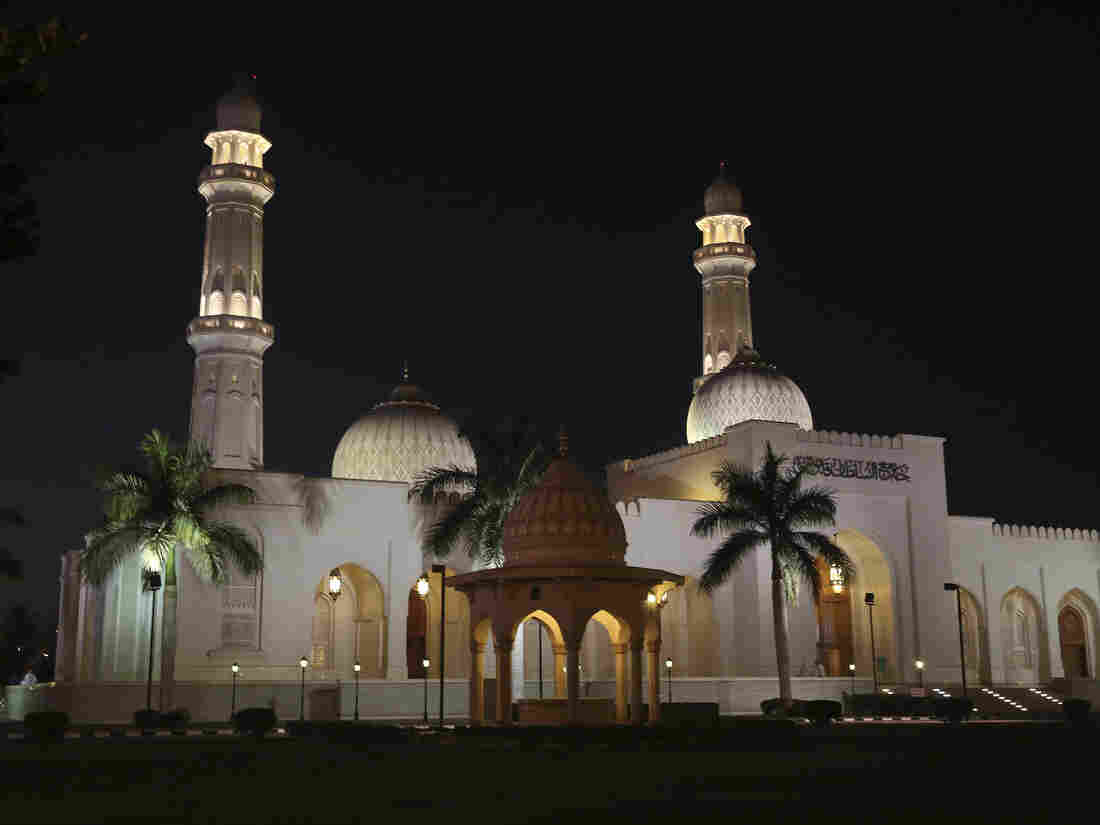 The Sultan Qaboos Mosque in Salalah, Oman. The country has emerged as a quiet facilitator of dialogue, including between Iran and the U.S. Sam McNeil/AP hide caption 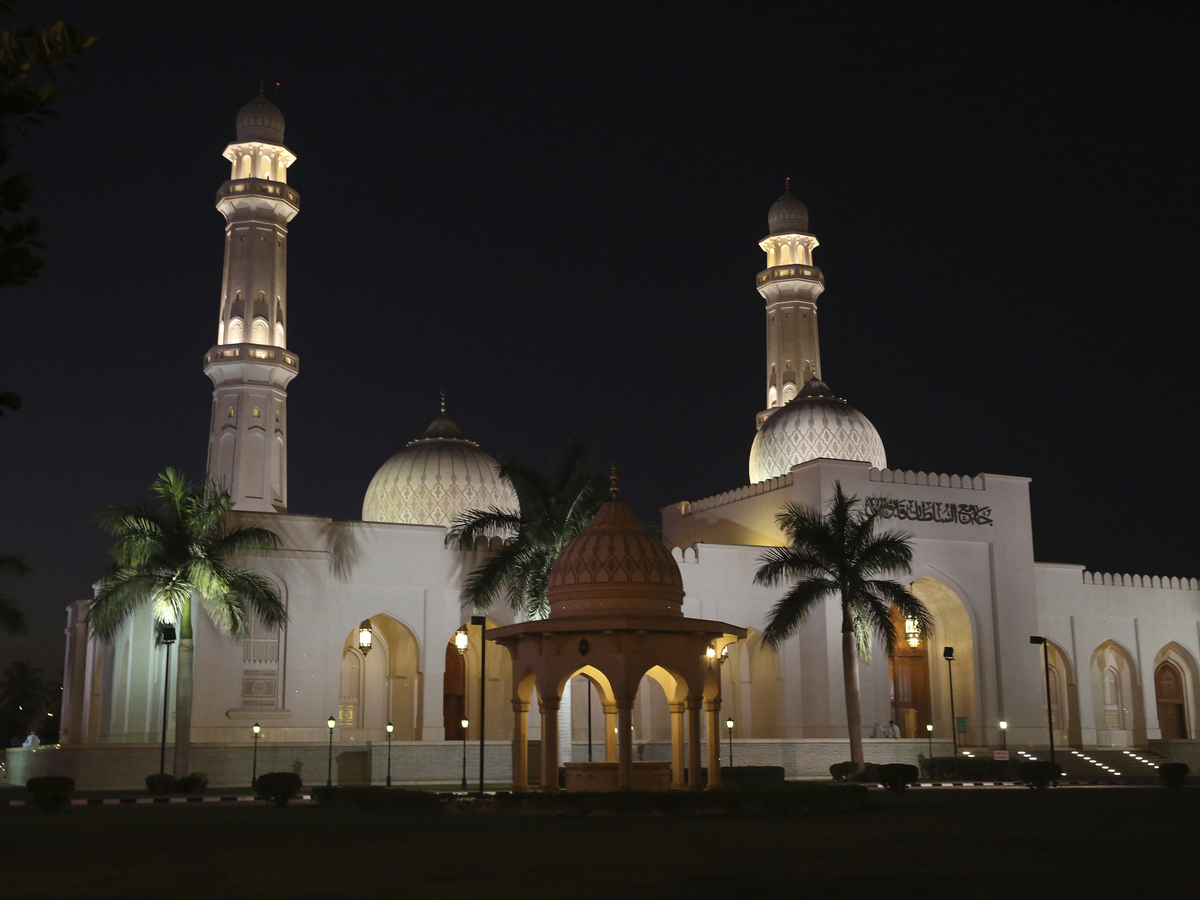 The Sultan Qaboos Mosque in Salalah, Oman. The country has emerged as a quiet facilitator of dialogue, including between Iran and the U.S.

On a beach in Muscat, Oman's capital, families gather on a Friday evening to enjoy a brief respite from the scalding heat of this desert country's summer. Women fully clad in abayas splash amid the gentle waves with their children. Shrieks of laughter fill the warm air. Toddlers build sandcastles at the water's edge.

It's a picture of tranquility that jars with the violent headlines coming from this region. Oman shares a border with Yemen, a country at war. It is situated between powerful rivals Saudi Arabia and Iran. And the Gulf of Oman — the sea where locals play — is part of a key oil shipping route for the world, and a place where oil tankers have been attacked in recent weeks.

Yet Oman manages to stay out of it all. In a part of the world afflicted by war, this tiny sultanate, a country of 4.6 million people, has emerged as a quiet facilitator of dialogue. A friend to many opposing sides, it places itself between conflicts without being engulfed by them.

"We don't talk much; we act much," says Mohammed bin Awadh al-Hassan, Oman's incoming permanent representative to the United Nations, speaking in the palatial foreign ministry in Muscat. "Sometimes we play the role of facilitator when we think we can help. But on the condition of no media, because the goal is peace, not publicity."

Oman has sought to calm the conflict in Yemen, and helped secure the release of American hostages both from the Yemeni capital Sanaa and from Iran. 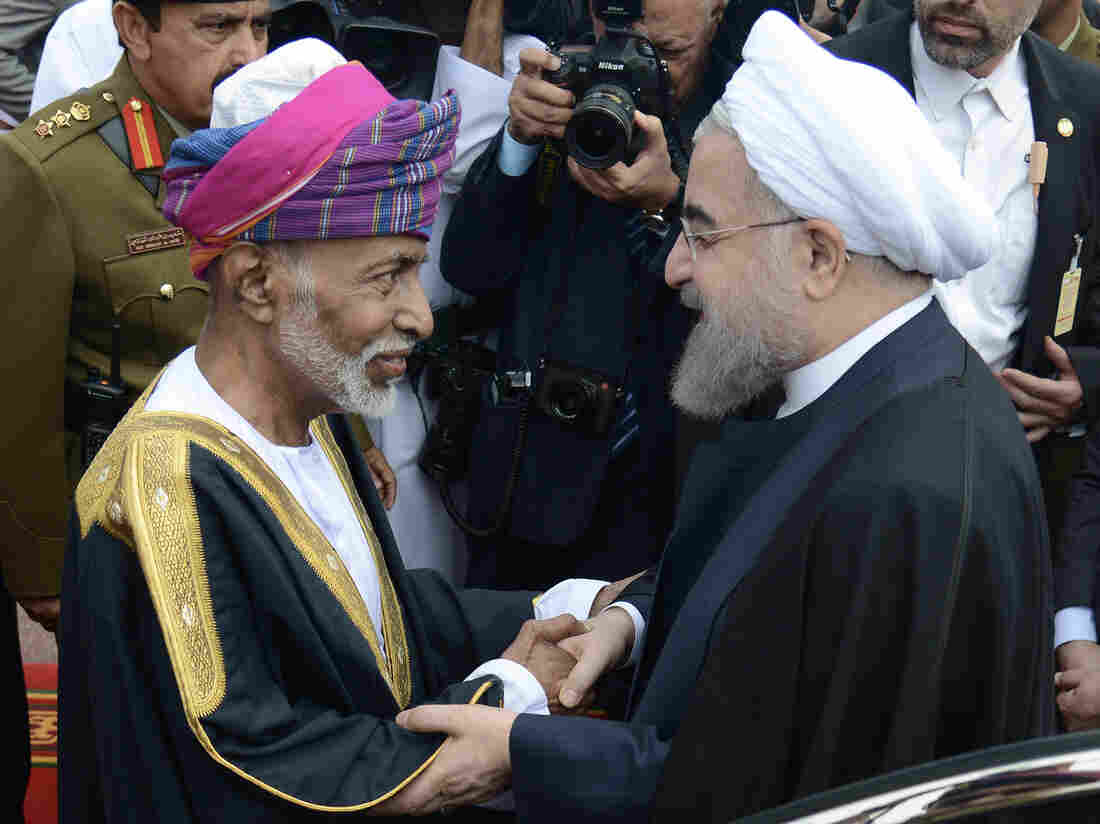 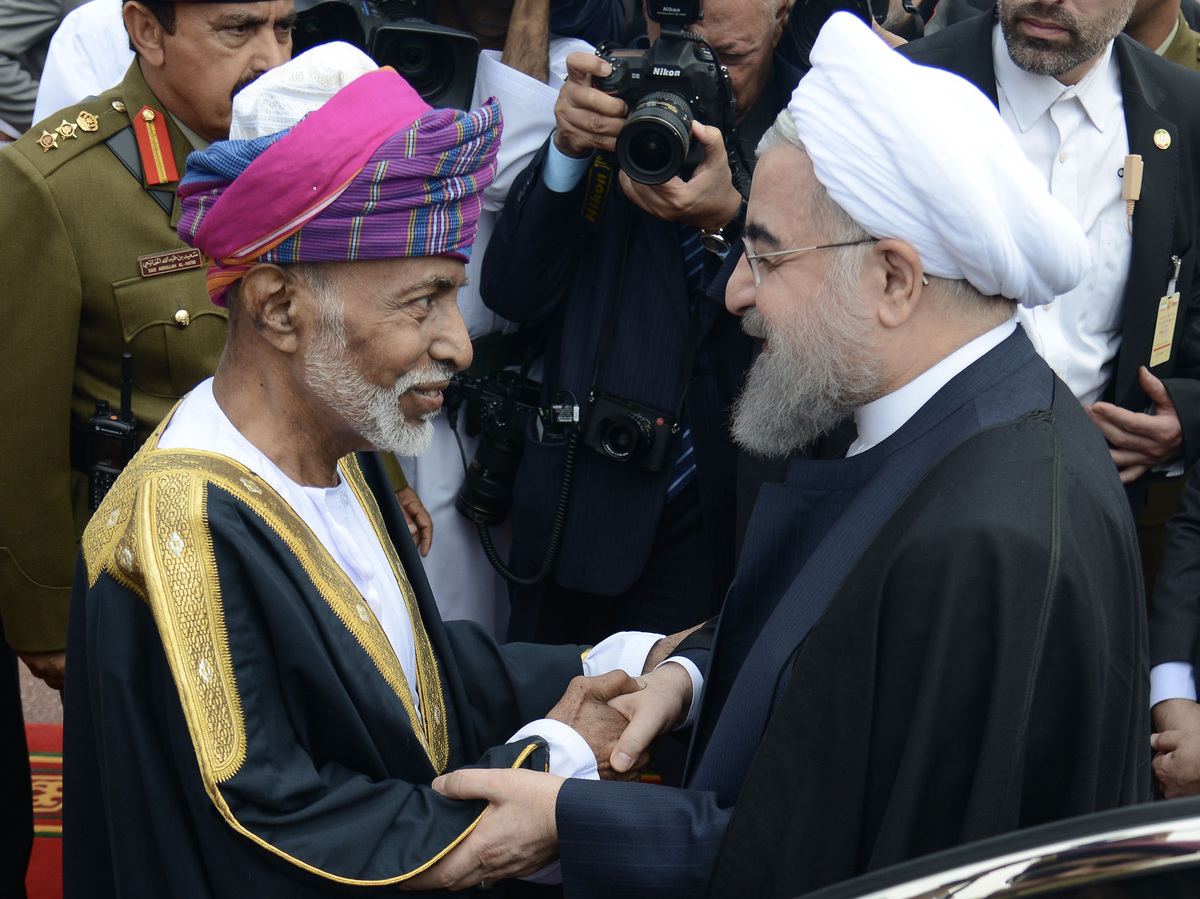 It was its close relationship with both Iran and the United States — "we are a friend to both countries," Hassan says — that allowed Muscat to host the first secret meetings between American and Iranian officials, in the discussions that ultimately led to the Joint Comprehensive Plan of Action, the Iran nuclear deal, in 2015.

Now, with that deal falling apart, some in Iran and the U.S. hope Muscat might once again intercede.

Omani diplomats have met with Iranian officials in recent weeks. And Secretary of State Mike Pompeo met with Oman's 78-year-old leader, Sultan Qaboos bin Said al-Said, in January, after the U.S. withdrew from the Iran deal. 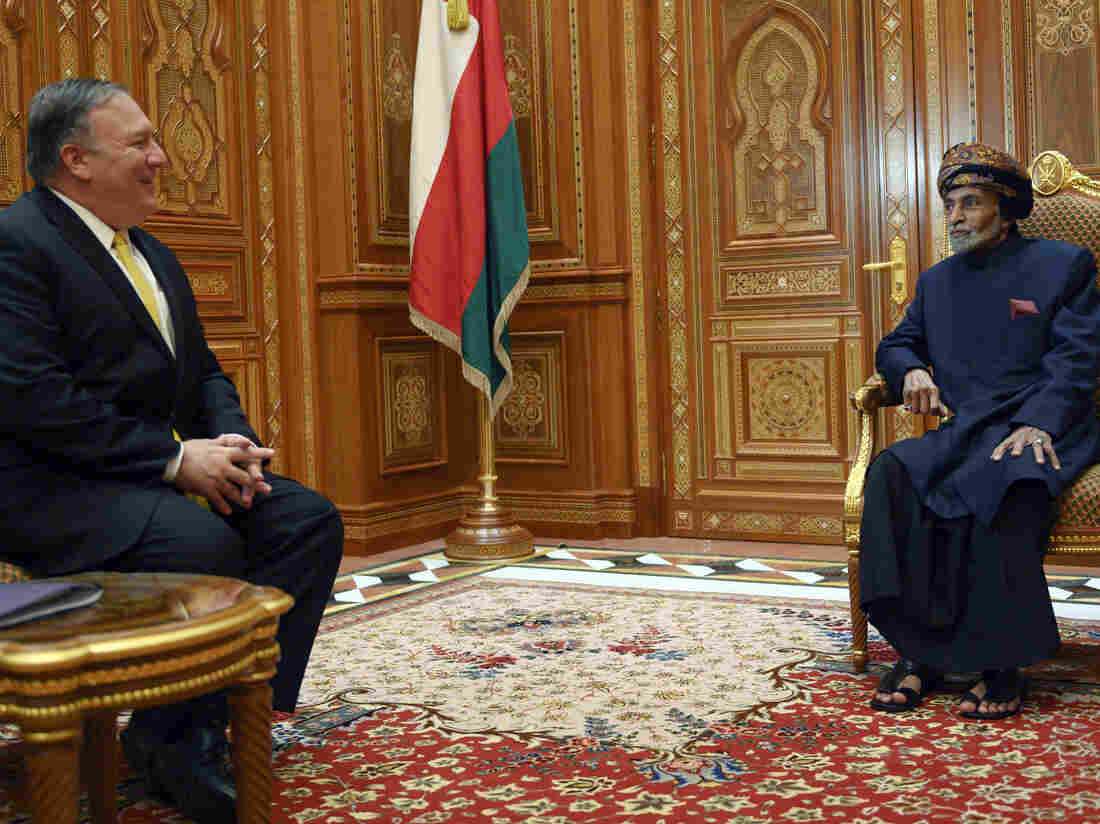 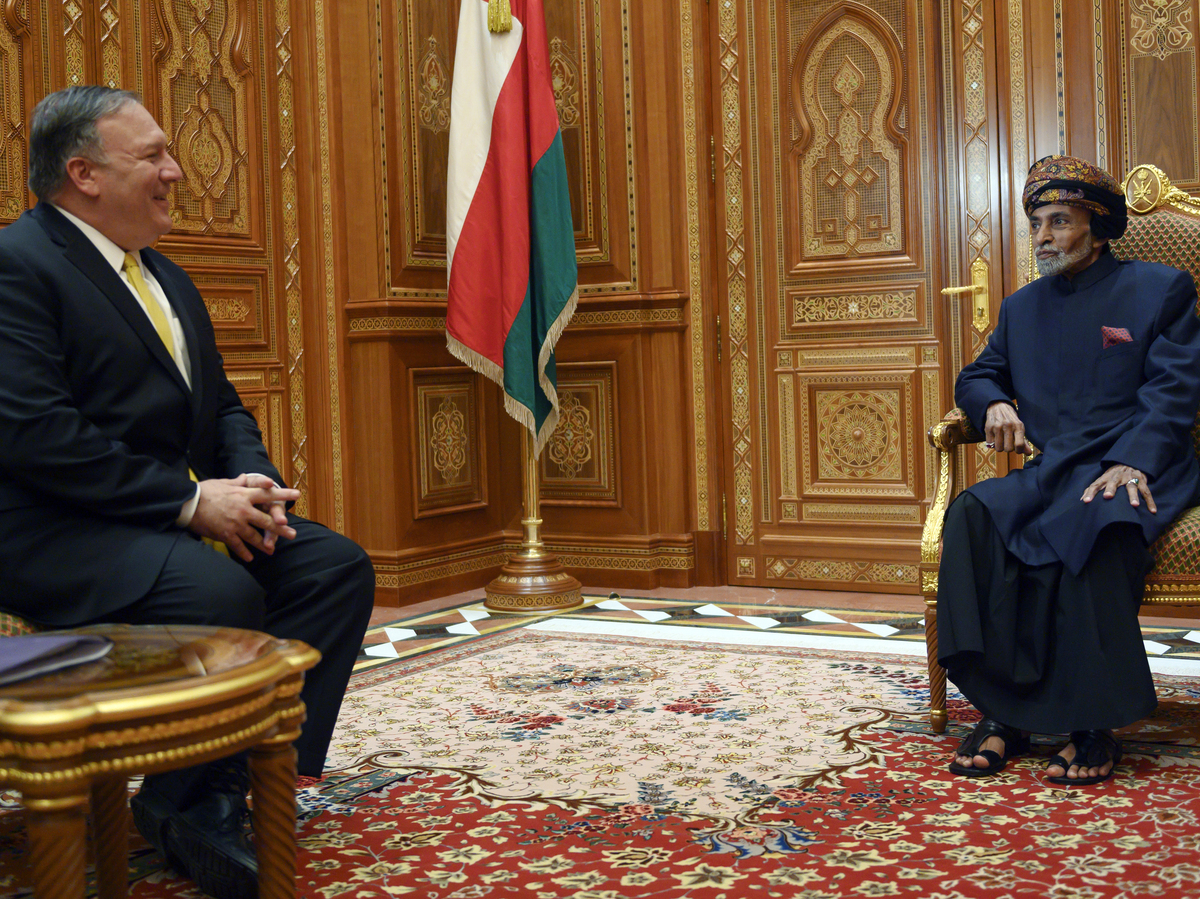 Secretary of State Mike Pompeo met with Sultan Qaboos in Muscat in January.

Brian Hook, the U.S. special representative to Iran, visited Muscat last month on a tour of the region, following Iran's shootdown of a U.S. drone in the Strait of Hormuz. Speaking with NPR, Hook warned that Iran should come to the negotiating table or "watch its economy crumble" through stricter U.S. sanctions.

With neither side seeming willing to concede, European diplomats have spelled gloomy predictions for the future. But not so Hassan. As an Omani diplomat, he says he always sees chances for peace — whether between Iran and the U.S. or elsewhere. Where others see conflicts, he frames things in calmer tones.

For example, "There are no disputes, in fact, between Saudi Arabia and Iran," he says, describing the regional rivalry that has seen the two countries back opposing sides in the wars in Syria and Yemen. "There are tensions when it comes to their fear of the other's influence."

And he has a much more generous interpretation of President Trump's foreign policy than many other countries in the region. While others view U.S. actions, such as the decision to move the U.S. Embassy in Israel from Tel Aviv to Jerusalem, as impulsive and dangerous, Hassan says these actions should be understood in the context of "legacy." 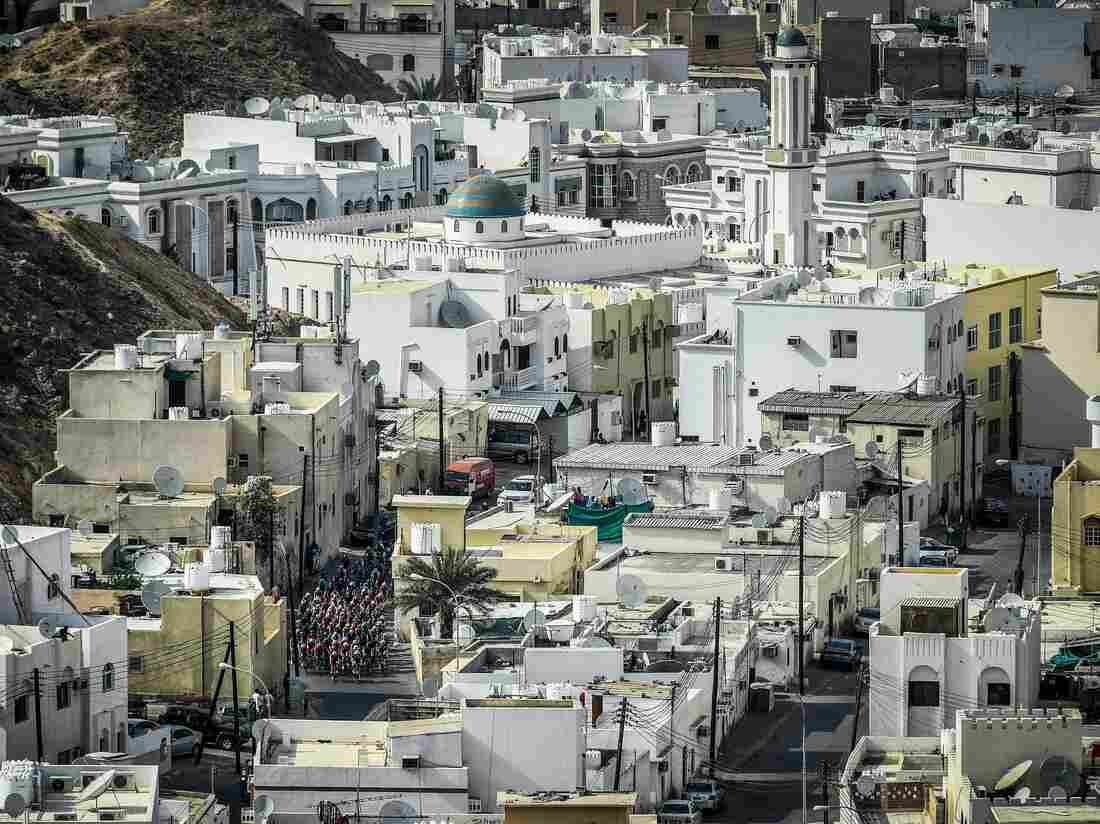 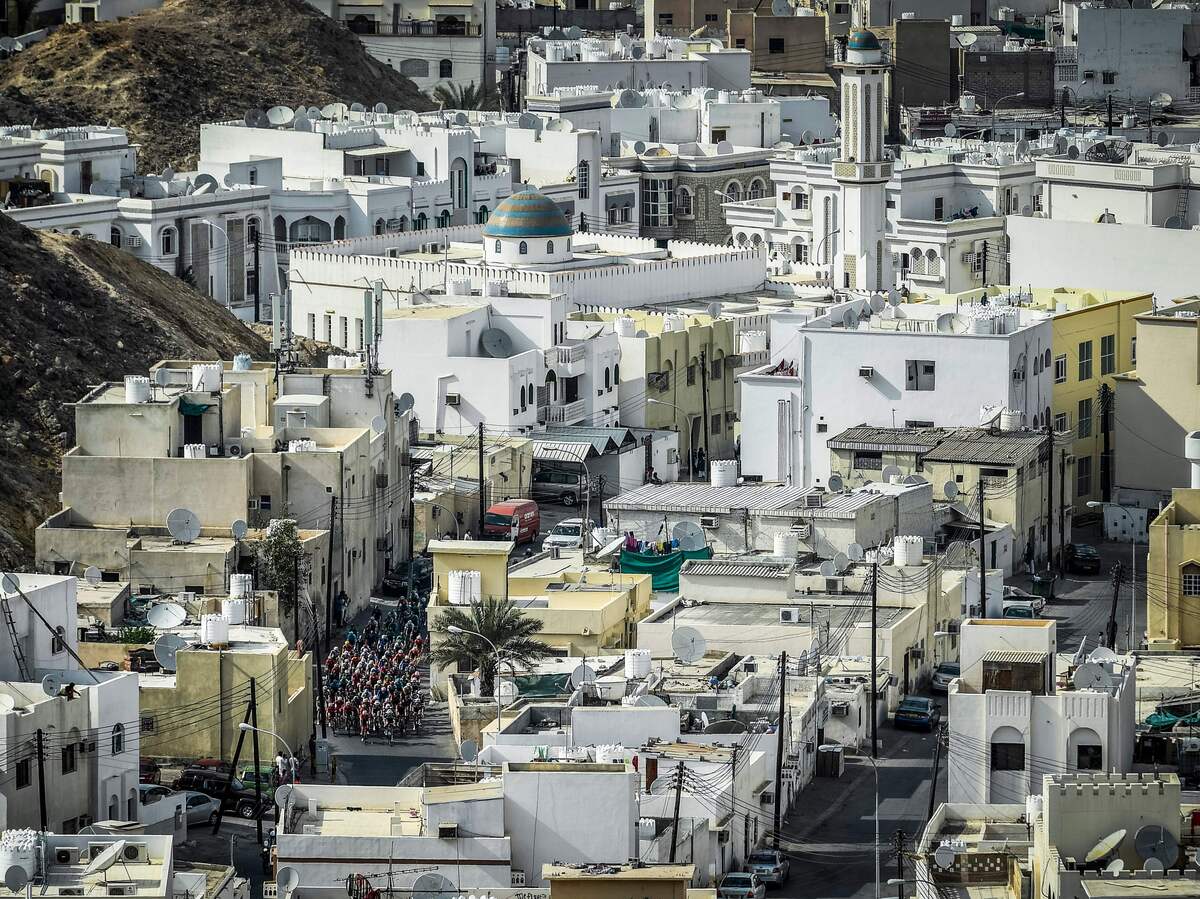 Muscat, Oman's capital, is quieter and calmer than many other Mideast cities.

"We think President Trump would like to have a real legacy in the region, and that's why he appointed his own son-in-law [Jared Kushner] to try to bring peace between the Palestinians and Israelis," Hassan says. "So we see this as an opportunity to help Trump understand the bigger picture. We are not afraid to be candid with our advice."

When it comes to Iran, he says: "The Iranians have a proud history going back thousands of years, and they will not accept intimidation. It's important for both countries to recognize the legitimate rights of the other side, and to believe that the use of force us not the best tool to resolve differences."

Ultimately, Hassan says, Omani diplomacy is about building friendships and embracing an optimistic perspective. "We always keep a focus not on the negative, but on the positive," he says. "When you focus on this, opportunities for peace become quite clear." 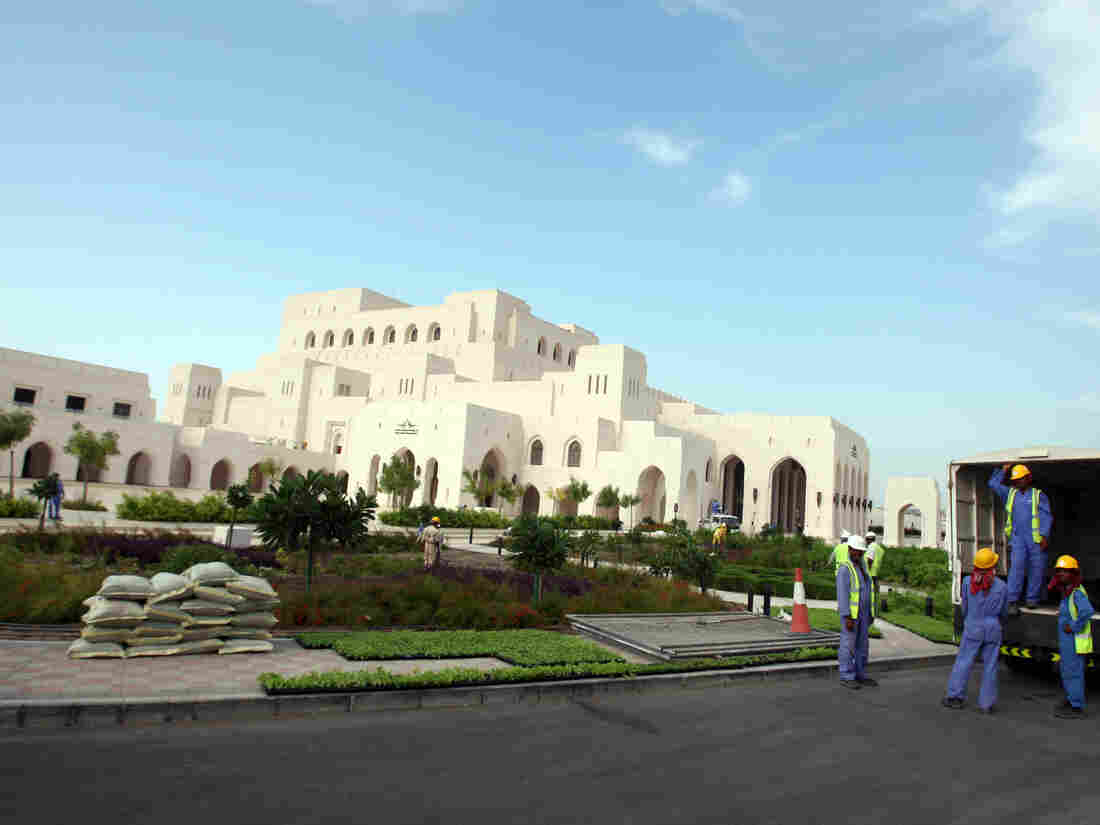 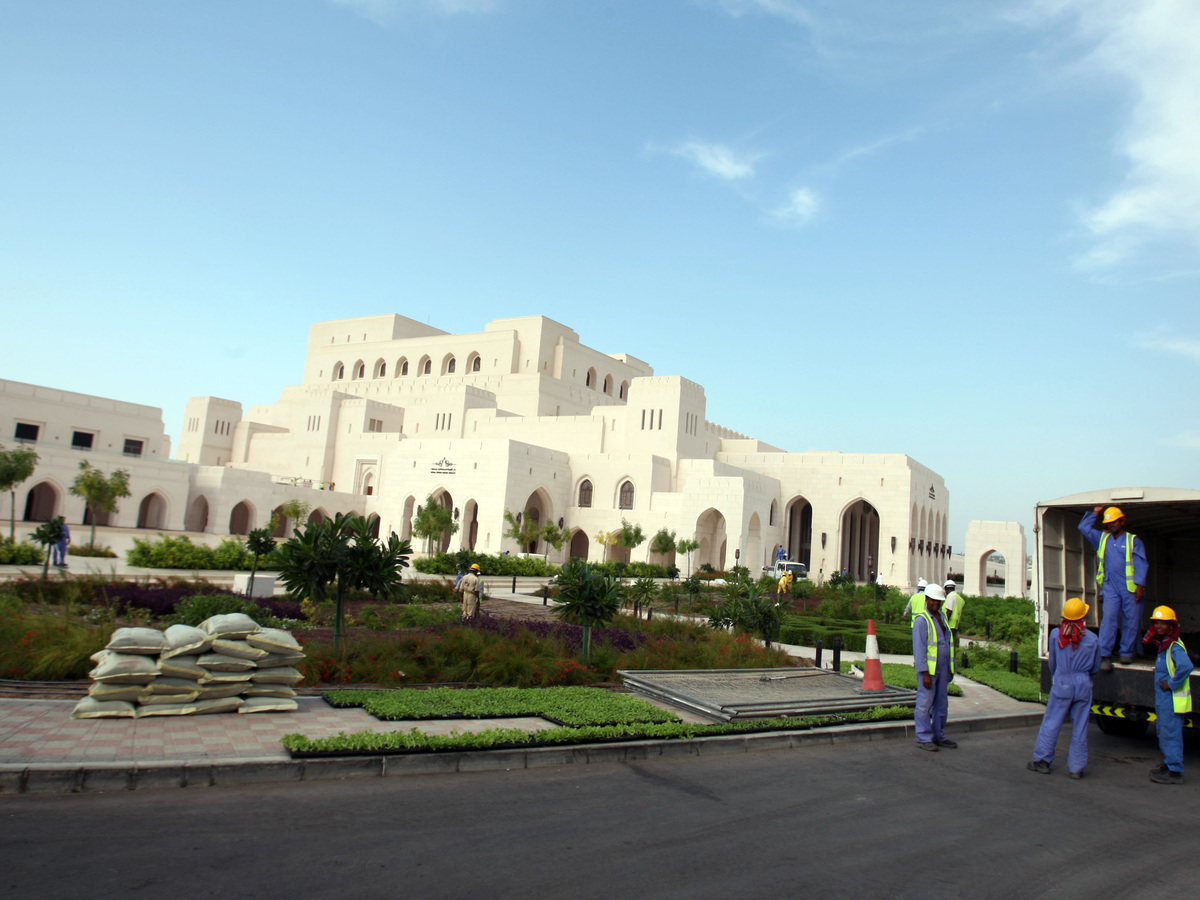 Oman's foreign policy is an extension of its domestic approach. In contrast with the noise and glare of other capital cities in the Middle East — the crush of bumper-to-bumper traffic in Cairo, the flashy skyscrapers of Dubai — Muscat is quiet and calm.

Cars navigate wide, smooth boulevards lined by lawns kept perfectly green in this desert environment by sprinklers set on timers. The city is defined by its neat, pearly-white villas set behind hedgerows that burst with flowers. Even Muscat's bustling local souk is devoid of the usual chaos of such markets. Shoppers quietly barter with stall owners, with the smell of frankincense, produced in Oman, hanging thick in the air.

Any conflict or public display of aggression or dissent is deeply frowned upon. The country is ruled by an absolute monarchy, with a tight rein on freedom of expression. Few Omanis are willing to talk publicly about politics, except to conspicuously praise their ruler.

Oman doesn't have the same record of violent repression as other countries in the region, such as Saudi Arabia or Syria. But its security services are active, and closely monitor Internet activity.

And the country's rigid social structure keeps opposition in check.

"You won't necessarily be dragged to prison, but rather [state security or others] will go and speak to your father or your family, or your tribe. They will use these pressure points to get you to behave," says one Omani, speaking on condition of anonymity for fear that the topic was controversial. 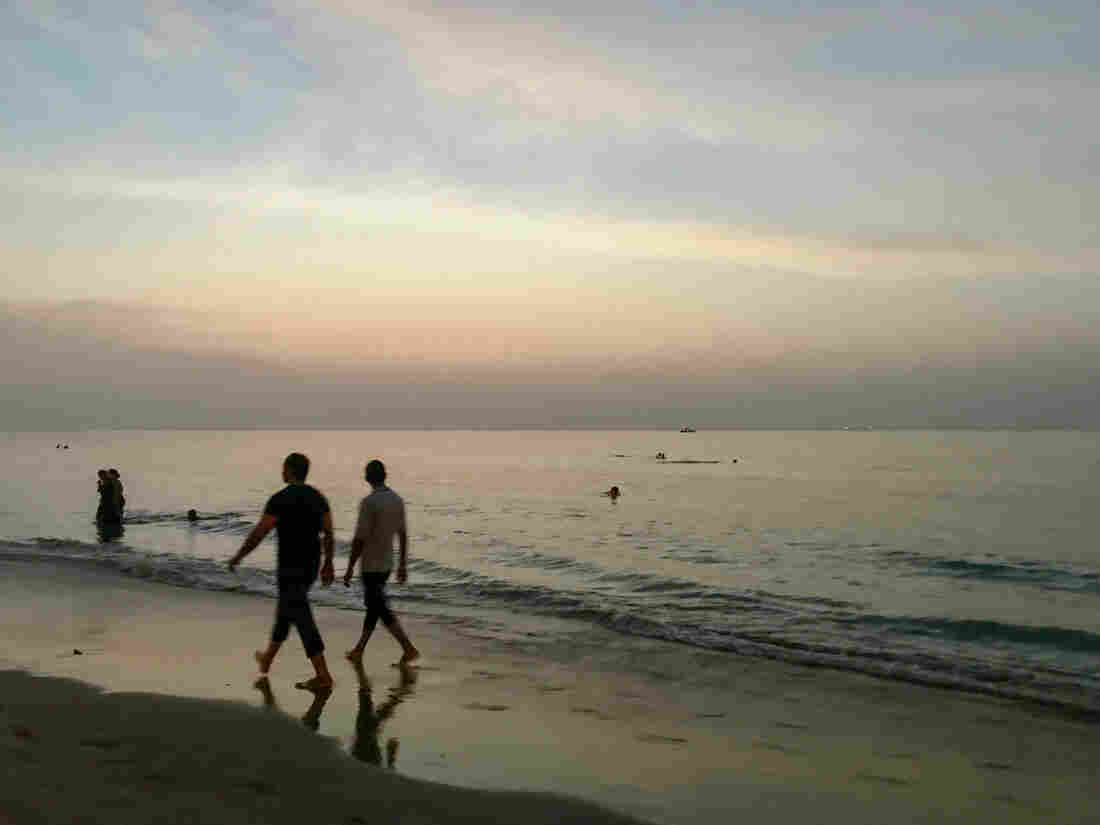 Omanis enjoy a respite from the scalding summer heat by swimming and relaxing on the beach in Muscat. Ruth Sherlock/NPR hide caption 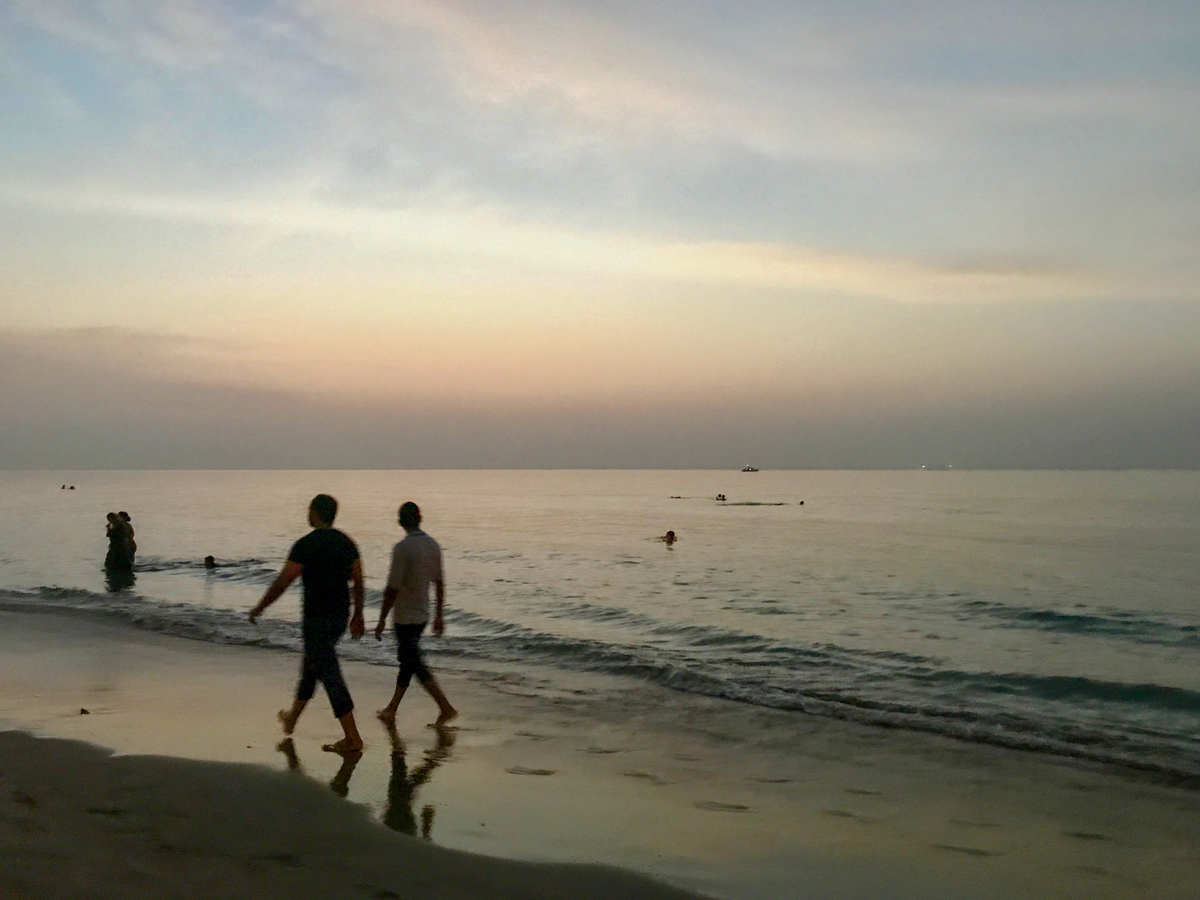 Omanis enjoy a respite from the scalding summer heat by swimming and relaxing on the beach in Muscat.

So the best way, as an Omani, is to remain cordial with everyone. "Being Omani is exhausting," quips one European diplomat. "You have to be constantly building relationships and making sure you are on good terms with the country's many different tribes."

Oman's history and dominant religion also help set it apart from the countries that surround it. Many Omanis practice Ibadism, a tiny branch of Islam, so they are not entangled in Sunni and Shia sectarian struggles in the region. And while Oman is an Arab country, it has influences from India, East Africa and other parts of the world because it is a trading nation on the sea.

"Actually, it's the history of Oman, and the culture of Oman; all these factors shape the Omani people and traditions," says Zakariya Muharami, an Omani writer on politics and culture.

All this is reinforced by Sultan Qaboos' vision for the country as a peaceful, quiet place amid a region of turmoil. The sultan, who has ruled since overthrowing his own father in 1970, has set a sophisticated tone. Muharami says Omanis have grown up listening to Western classical music, which is played in prime time on state television and radio.

Muscat boasts a Royal Opera House, whose performances have won international acclaim. A favorite project of Sultan Qaboos, the opera house combines influences from around the world — built with Omani sandstone, Italian marble and teak ceilings from Myanmar. During a March performance of Léo Delibes' Lakme, the audience was treated to a specially designed perfume that was wafted into the grand performance hall.

Nasser Altai, an adviser to the Royal Opera House Muscat board of directors, says the performance hall is a visual expression of the sultan's vision for Oman — and its foreign policy.

"When we opened the opera house in 2011, His Majesty said that Oman has always played a constructive role in serving peace," he says. "And so he thought that a state-of-the-art venue for art and music is one of the best ways to promote this, to carry on this message. It's a way to bring people together, because music is the expression of human values, of sentimental memories, of nostalgia, of love and passion. Whether it's classical music or our own traditional music, it is the vehicle to bring people together."