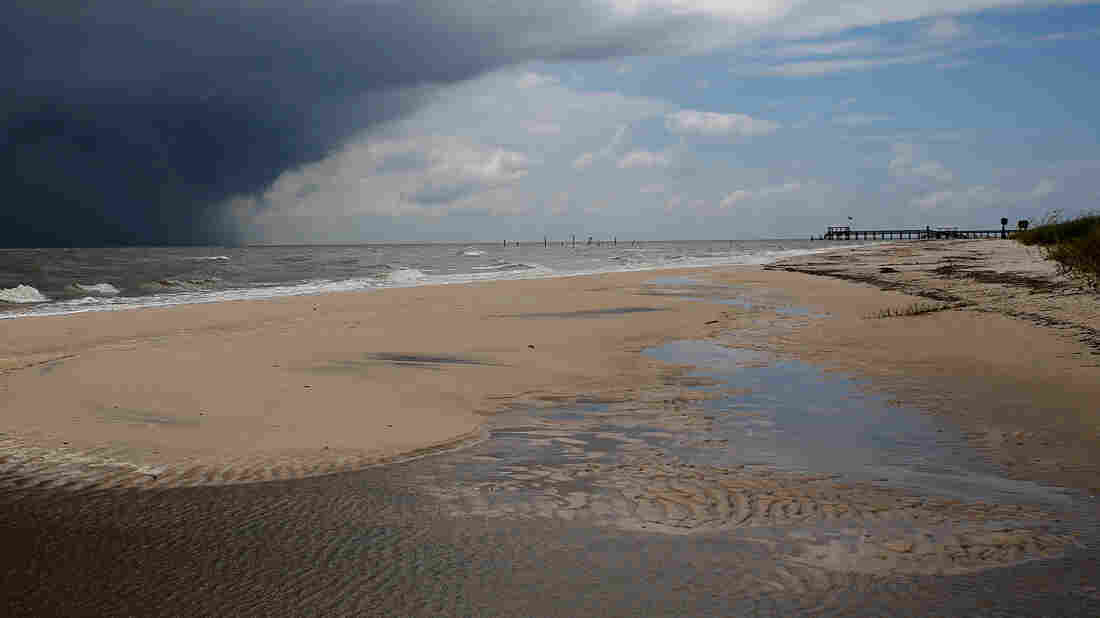 Waveland and other beaches in Mississippi are closed because of a large algae bloom along the coast. The beach is seen here last September, as storm clouds from Tropical Storm Gordon approached. Jonathan Bachman/Reuters hide caption 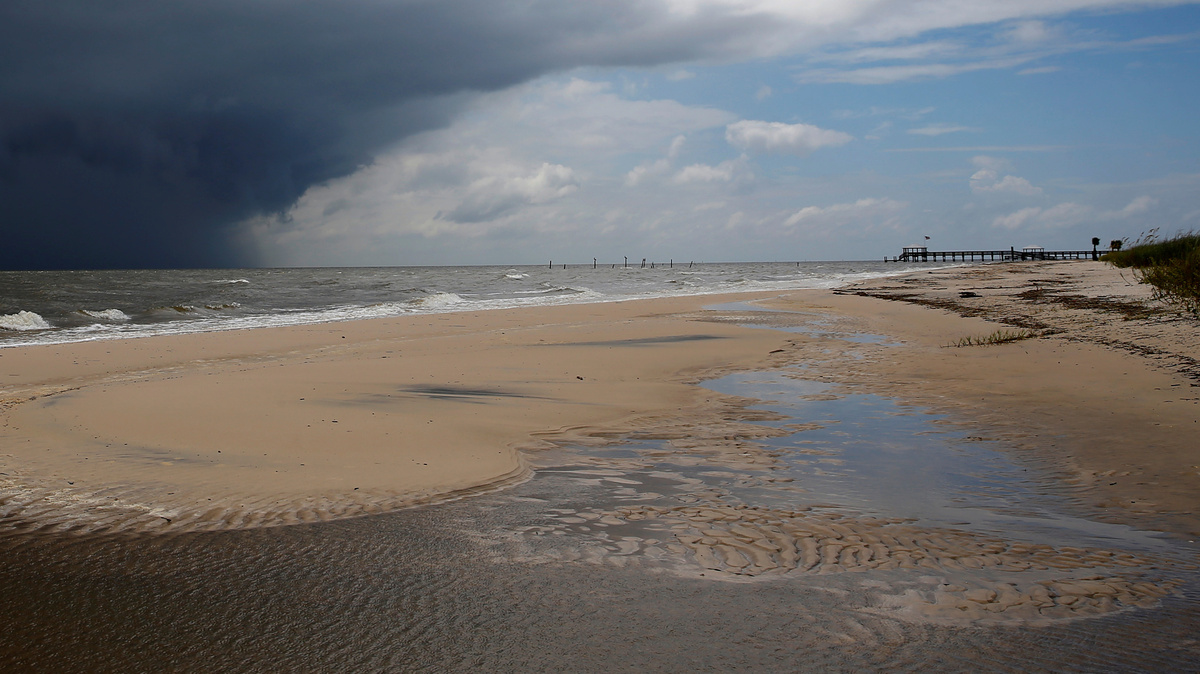 Waveland and other beaches in Mississippi are closed because of a large algae bloom along the coast. The beach is seen here last September, as storm clouds from Tropical Storm Gordon approached.

A bloom of toxic algae has forced Mississippi to close 25 beaches along its Gulf Coast. State environmental officials say people can still visit the sandy beaches — but they should avoid any contact with the water.

The blue-green algae "can cause rashes, stomach cramps, nausea, diarrhea and vomiting," the Mississippi Department of Environmental Quality says. And it warns that exposure can affect pets.

Toxins in the algae can also affect the liver and nervous system. The state agency advises people along Mississippi's coast "to not eat fish or any other seafood taken from affected areas."

The algae are thriving because after weeks of heavy rainfall, freshwater has contaminated the gulf's normal saltwater. The effects are being felt along a lengthy band of the coast, from the Mississippi Sound to Lake Pontchartrain in Louisiana, where a large bloom has also been reported.

"When it's in bloom, it looks like green paint, very fluorescent green," Steve Bailey of the Mississippi Department of Environmental Quality says in an interview with member station Mississippi Public Broadcasting.

"So we have a huge amount of fresh water in the Sound along with the shallow waters, plenty of sunlight. It was just perfect conditions for a huge bloom to occur," Bailey says.

Mississippi environmental officials have closed beaches along the Gulf Coast, warning people not to come into contact with a toxic blue-green algae bloom.

Warnings about the toxic algae have increased as the bloom has grown and spread to the east along the Gulf Coast. Just two weeks ago, Mississippi had only nine beach closures.

In neighboring Louisiana, health officials have issued an advisory for a large algal bloom in Lake Pontchartrain as of Tuesday. That's in addition to 12 beach advisories that were prompted by water samples that exceeded federal thresholds for fecal coliform indicator bacteria.

Faced with a swollen Mississippi River from historic floodwaters this spring and summer, the U.S. Army Corps of Engineers opened the Bonnet Carré Spillway to divert water, protect levees and prevent flooding in New Orleans and low-lying areas downriver.

The Corps has left the spillway open since May, for a total of more than 100 days — the longest it's ever been open, according to NOLA.com. It will likely stay open for at least another week, as officials wait for the river level to drop.

While the abrupt change in salinity has helped the algae bloom, it has harmed a wide range of coastal animals that thrive in salty or brackish waters — including dozens of dolphins that were found dead, NOLA reports.

On Monday, Louisiana's congressional delegation asked for federal disaster aid, citing the threat to the oysters, crab, shrimp and coastal fish upon which the fishing industry relies.

"The Mississippi River has surpassed a 92-year flood record," the delegation wrote in a letter to Commerce Secretary Wilbur Ross. The lawmakers noted that 2019 is the first year in which the spillway in St. Charles Parish, La., has ever been opened twice.

Unfortunately for those on the Gulf Coast, more freshwater is on the way: Forecasters say a tropical depression is expected to form in the northern Gulf of Mexico by Thursday, promising to dump heavy rainfall on the northern and eastern Gulf Coast, the National Hurricane Center said on Tuesday.