Accessibility links
Girls Captured By Boko Haram Brought Into Focus In 'Beneath The Tamarind Tree' Former CNN journalist Isha Sesay argues that the Nigerian government, the media and the public have failed the 276 Chibok schoolgirls kidnapped by the terrorist group five years ago. 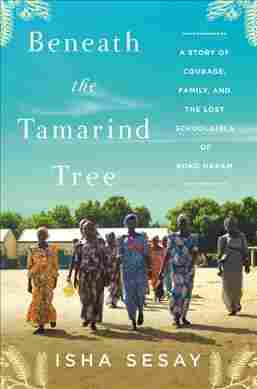 Beneath the Tamarind Tree

A Story of Courage, Family, and the Lost Schoolgirls of Boko Haram

Title
Beneath the Tamarind Tree
Subtitle
A Story of Courage, Family, and the Lost Schoolgirls of Boko Haram
Author
Isha Sesay

But now, in her first book, titled Beneath the Tamarind Tree, Sesay has a chance to explore, in depth, the story most important to her career and closest to her heart: the ISIS-affiliated terrorist group Boko Haram's 2014 kidnapping of 276 schoolgirls from the northern Nigerian town of Chibok.

Sesay broke the story and followed it for years, despite government obfuscation and waning international interest after a wave of social media activism (remember #BringBackOurGirls?). For two years, 219 of the girls remained in captivity and 112 are still imprisoned.

In Beneath the Tamarind Tree, Sesay combines the released Chibok girls' stories with her own journalistic experiences to powerful effect.

Sesay is a briskly opinionated writer, and from the first chapters Beneath the Tamarind Tree presents a forceful combination of reportage and social analysis. Having left CNN, Sesay is free to ground her book in her own advocacy for girls' education — and in her determination that the Chibok girls' story not be left in "a Nigerian vacuum."

Rather, she presents the story as part of two larger, linked arguments: First, that classism, racism and sexism determine what news stories we receive and how we receive them; and second, that Boko Haram's vehement opposition to girls' schooling makes horribly manifest a broader global failure to support women's equality and liberation.

The latter argument is perhaps more familiar than the first. Though the point remains crucial, few readers who pick up an account of the Chibok kidnapping will be surprised to learn that "Boko Haram's unbending opposition to girls' education is, in essence, an expression of its desire to silence them," or, as a corollary, "To deny females a voice is to take away their ability to challenge the very practices and norms that subjugate and harm them." Where Beneath the Tamarind Tree sets itself apart is in its exploration of the Nigerian government and the international media's complicity in silencing the Chibok girls' voices, and those of their parents and of the Nigerian activists fighting for their release.

Sesay considers the Nigerian government's role intentional and, to some extent, malicious. When the Chibok girls were abducted, then-President Goodluck Jonathan determined that the kidnapping was "a hoax, one devised to embarrass and ultimately drive him from office." Several weeks after the kidnapping, his wife, Patience Jonathan, told the mothers of some of the missing girls, "We, the Nigerian woman, are saying that no child is missing.... There is nothing we can do again." Jonathan's successor, Muhammadu Buhari, campaigned on a pledge to bring back the Chibok girls, but immediately de-prioritized their rescue upon taking office.

The kidnapped girls came from Borno State, a politically marginalized region where less than 30 percent of primary-school-age girls were in school. To Sesay, it seems clear that girls' education in Borno was never important to the Nigerian government, a guess confirmed by the government's failure to guard the Government Girls Secondary School in Chibok. Despite public knowledge that Boko Haram — whose very name translates to "Western education is forbidden" — was active in Chibok, the hundreds of female students boarding in Chibok were protected by only two men, both over the age of 60.

The international media's indifference to female voices is, perhaps, less intentional but more insidious, according to Sesay. Sesay covered Boko Haram's release of the first 21 girls, of which she writes, "This was the moment I'd been waiting for, a chance to shift attention away from the troubling view of these girls as ciphers for loss, a stolen cache of nameless, faceless black bodies." But Sesay had to lobby to cover the story — and CNN sent her to Chibok with very little backup. Both inside and outside the newsroom, the reaction to the girls' return was muted. Sesay was let down, but her viewers' and bosses' indifference underscored something she already knew: "In large sections of U.S. society, the suffering of black and brown people — and in particular, black and brown women — is readily accepted and cast aside."

The Jonathan and Buhari governments failed the Chibok girls and their families. So did the rest of us, Sesay argues. The more sustained attention the international community pays to girls' education, the less able terrorist groups like Boko Haram will be to "deny an education and autonomy to huge swaths of people in an effort to keep them underfoot and make them easier to control" — in short, to recruit and intimidate their way to power. To Sesay, American viewers' ability to forget the Chibok girls' plight is symptomatic of a dangerous shortsightedness. "The horrors these girls have endured," she writes, should be "right at the heart of the conversation about the global threats America is facing."

By paying attention to girls' struggle to educate and emancipate themselves around the world, reporters, network and newspaper executives, and news consumers alike can contribute not only to rescuing the remaining Chibok girls, but to protecting communities of all kinds from forces of regression and fear.