Accessibility links
NPR Review: 'The Saturday Night Ghost Club,' By Craig Davidson Craig Davidson's new novel follows a group of kids through a strange summer of hunting urban legends — it's a coming-of-age story that's also about loss, particularly what we lose when we grow up. 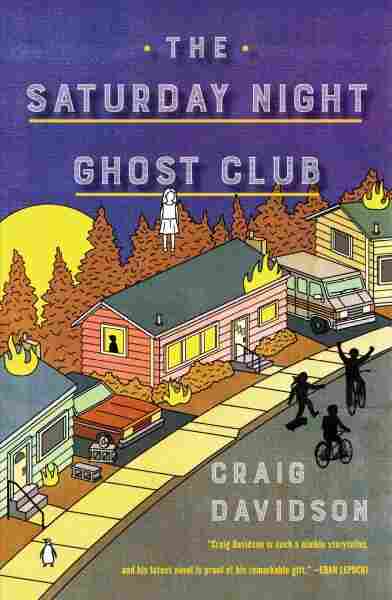 "Brain matter will squeeze through a keyhole," says Jake Baker, the main character of Craig Davidson's new novel The Saturday Night Ghost Club. Jake should know. He's a neurosurgeon, and he spends his days cutting into people's brains, hoping to heal the mysterious maladies that afflict the human brain. The Saturday Night Ghost Club is his story, although most of it takes place in the past — one summer during the '80s, in which he turned 12. He grew up in Niagara Falls, and the town's mist-shrouded natural monument serves as a dramatic backdrop to something bordering on the supernatural. Because as Jake tells it, he spent that summer with his eccentric Uncle Calvin and a handful of friends, practicing rituals and hunting ghosts and monsters.

Jake is a stereotypically nerdy kid: overweight, socially awkward, and prone to spending his time with his nose in a book. Uncle C, as Jake calls Calvin, is something else entirely. Tall and intense, he sports a necklace of tiny Cthulhu heads and owns a curio shop called the Occultorium, which is equipped with a homemade "Psycho-Phone" that Calvin alleges can be used to speak with the dead. Young Jake is an old soul, but Calvin is frozen in a state of eternal adolescence, living a kind of perpetual daydream made of urban legends, mystic folklore, and benign conspiracy theories. When a circle of their friends — including the Native American siblings Billy and Dove Yellowbird, the latter of whom Jake has a hopeless crush on — join them in the weekly ritual of investigating unexplained phenomena, nephew and uncle form a bond that begins to shake loose secrets from the family's past.

The Saturday Night Ghost Club is an unabashed bildungsroman, complete with budding romance, rites of passage, and the gradual awakening to adulthood. But it's as much a going-of-age story as it is a coming-of-age one. Bracketed by the adult Jake's struggles with losing patients and raising a boy of his own, the story is steeped in loss — particularly what we lose as we grow up. Davidson points out how childhood wonder comprises equal parts hope and fear, and how the two coexist in Jake's transition into teenhood. And as the novel deepens, the adult Jake's ruminations on being a parent himself — both the fulfillment and the terror, the responsibility and the helplessness — grow harrowingly poignant.

'Saturday Night Ghost Club' is an unabashed bildungsroman, complete with budding romance, rites of passage, and the gradual awakening to adulthood.

The plot of the slim book is slow to kick in, but that's not a drawback. The leisurely opening gives Davidson a chance to lovingly indulge in some genre tropes, everything from the neighborhood bully to baseball cards stuck in bicycle spokes. Rather than feeling clichéd, they resonate; Davidson is clearly and intentionally using such archetypal elements as modeling clay, just as the story touches on coming-of-age works from Stand by Me to Stranger Things. But there's a much more complex machinery at work. The author's powers of description poetically evoke the magic of youth, from "the rustling of dead leaves in the eavestroughs" that startle Jake in the night to the "hint of woodsmoke come autumn" in his line-dried bedsheets. The masterful segues between the narratives of child Jake and adult Jake shimmer. And even more profoundly, the book is a celebration of the secret lives of children, both their wonders and their horrors.

Ultimately, though, The Saturday Night Ghost Club's biggest triumph is its examination of memory. Jake's observation that a brain can squeeze through a keyhole is more than just a vivid illustration; it's symbolic of the way the human mind unlocks — or fails to unlock — both history and itself. The future neurosurgeon in Jake must grapple with the fallout of trauma, both physical and emotional, as well as the memories of experiences that teach him a hard lesson: Hunting imaginary monsters is a grand adventure, but the most horrendous monsters can be real people. Immensely enjoyable, piercingly clever, and satisfyingly soulful, The Saturday Night Ghost Club is an exquisite little talisman of a book, one that doesn't flinch as it probes the dark underside of nostalgia.