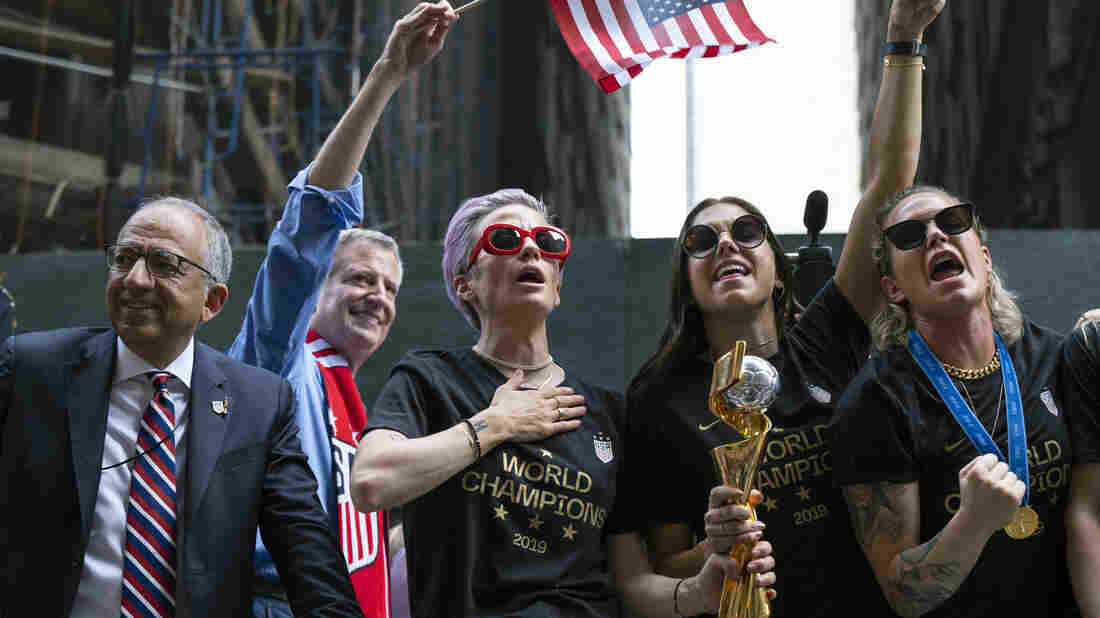 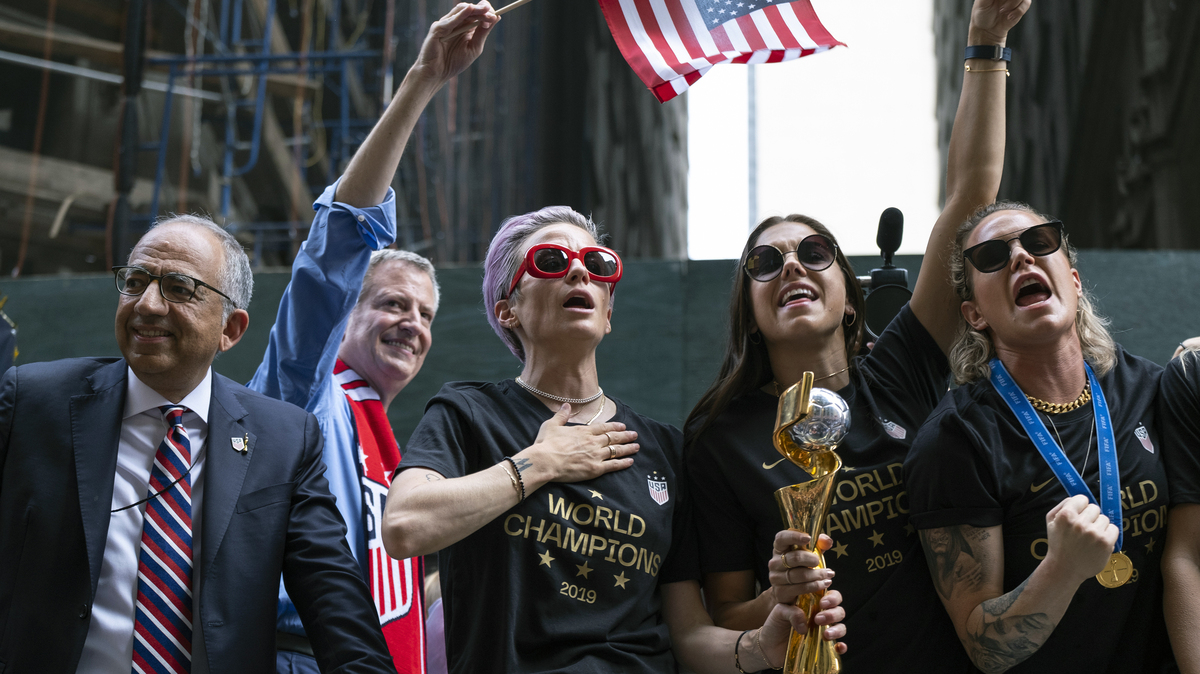 "This group is so resilient, is so tough, has such a sense of humor — is just so bad-ass," Rapinoe said as she praised her teammates.

The parade started at 9:30 a.m. ET, when Rapinoe, Alex Morgan, Rose Lavelle and their teammates embarked from Battery Park on the southern tip of Manhattan. From there, the parade moved north up Broadway to City Hall, where a banner declared, "One nation. One team."

As the athletes and coach Jill Ellis made their way through the confetti, the cheers turned from a rumble into a roar. By the time they slowed to a stop at the corner of Broadway and Barclay St. near City Hall, the mood was one of joyful uproar — pandemonium under sunny skies.

"USA! USA! USA!" the crowd shouted, whenever the cheers let up. And referring to the players' push to be paid on equal terms as the men, they also chanted a rhyming phrase: "Equal pay!"

The fans included Corina Patterson of Queens, who explained her presence to NPR's Colin Dwyer by saying: "This is f*****' history in the making, dude."

At 10:30 a.m., many of the fans moved to chairs and bleachers outside of City Hall, where Mayor Bill de Blasio hosted a ceremony to mark the team's second consecutive world championship and fourth overall. All of the athletes were also to receive a key to the city.

"This is America's team, and we could not be more proud of our team, " de Blasio said, noting the inspirational roles the women have played for young girls in the U.S.

As ABC TV's Robin Roberts introduced each player at the ceremony, the athletes emerged to loud cheers, holding hands with young soccer players as the song "All I Do Is Win" by DJ Khaled played on loudspeakers.

The loudest cheers were for Rapinoe — who briefly handed the golden World Cup trophy to the young woman escorting her before dancing down the aisle.

"This is crazy. This is absolutely insane. Such at a loss for words," Rapinoe said. She quickly added, "I mean, I'll find them, don't worry."

Referring to the group's diversity, Rapinoe said, "We have pink hair and purple hair. We have tattoos, dreadlocks. We've got white girls and black girls, and everything in between."

"I couldn't be more proud to be a co-captain" of the team, she said. "It's my absolute honor to lead this team out on the field. There's no other place that I would rather be — even in the presidential race," she said to laughter and applause.

When U.S. Soccer Federation President Carlos Cordeiro addressed the crowd, he said that he feels like "one of the luckiest people on Earth," because for the past several weeks he has been able to travel with and cheer for "23 of the greatest athletes that the United States of America has ever produced."

Cordeiro reeled off some of the superlatives the team reached in France, from its 12 consecutive Women's World Cup victories and Carli Lloyd's scoring in six straight Cup matches to Ellis' status as only the second soccer coach — male or female — to win consecutive World Cup titles.

When Cordeiro noted Rapinoe's win of the tournament's best player, she slowly stood and recreated her now-trademark stance: head high, arms upswept, and a beaming smile on her face.

"To our women's national team and the millions who support them: In recent months, you have raised your voices for equality," Cordeiro said. He added, "We hear you. We believe in you, and we're committed to doing right by you."

Cordeiro did not make a surprise announcement of a new payment scheme. But as cheers of "Equal Pay!" rang out from the audience, he said, "We believe at U.S. Soccer that all female athletes deserve fair and equitable pay. And together, I believe we can get this done."

Rapinoe also noted that Cordeiro had stayed in France with the women's team and was in the tunnel for every game of the tournament. The Women's World Cup coincided with a deep run by the U.S. men's national team in the CONCACAF Gold Cup: Hours after the women beat the Netherlands in Lyon, the men lost to Mexico in the final, played in Chicago.

My favorite part of this #USWNT parade is @Allie_Long holding the TV mic and saying "Reporting live for ABC7, there's a woman with no shirt on who wants equal pay."

When Lloyd spoke, she thanked the fans for their support — but she also prompted the only boos of the day, by noting that despite growing up in neighboring New Jersey, she is a Philadelphia Eagles fan.

Those boos were only fleeting. The highly decorated Lloyd quickly won the crowd back over, saying "It never gets old. These parades are amazing. You fans are amazing."

Alex Morgan also thanked the fans — singling out their advocacy on the athletes' behalf.

"Thank you for your chants, your signs and your posters," Morgan said. "We appreciate it. Keep it going."

The U.S. women had showed that "playing like is girl is also to be unbeatable," New York City first lady Chirlane McCray said at the start of the ceremony.

"We are so proud that their first stop was the Canyon of Heroes," de Blasio said.

Before de Blasio and the athletes took the stage, an all-female Brazilian drumline called Fogo Azul kept the crowd energized, playing for some 15 minutes as strips of paper confetti drifted through the air.

The parade included about a dozen floats, from which players basked in the adulation of their fans. Bearing the U.S. national team's crest — with a new fourth star representing the latest world title — the floats also carried officials and dignitaries along the parade route.

"It's gonna be liiiit," Rapinoe said, drawing out the word as she climbed aboard a float shortly before 9 a.m., with a Champagne flute in her hand.

"NYC it's parade time let's do this!" Kelley O'Hara said via Twitter. She added, "Bonus points to anyone who brings me a beer or 4." 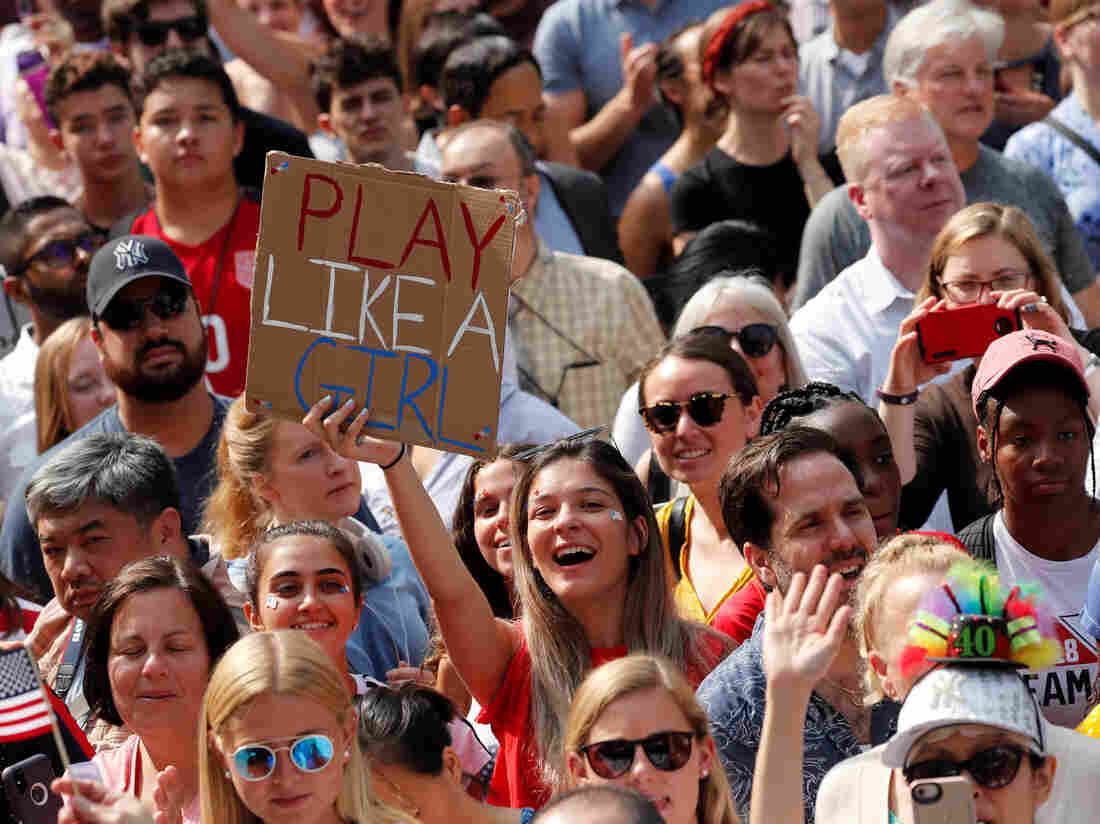 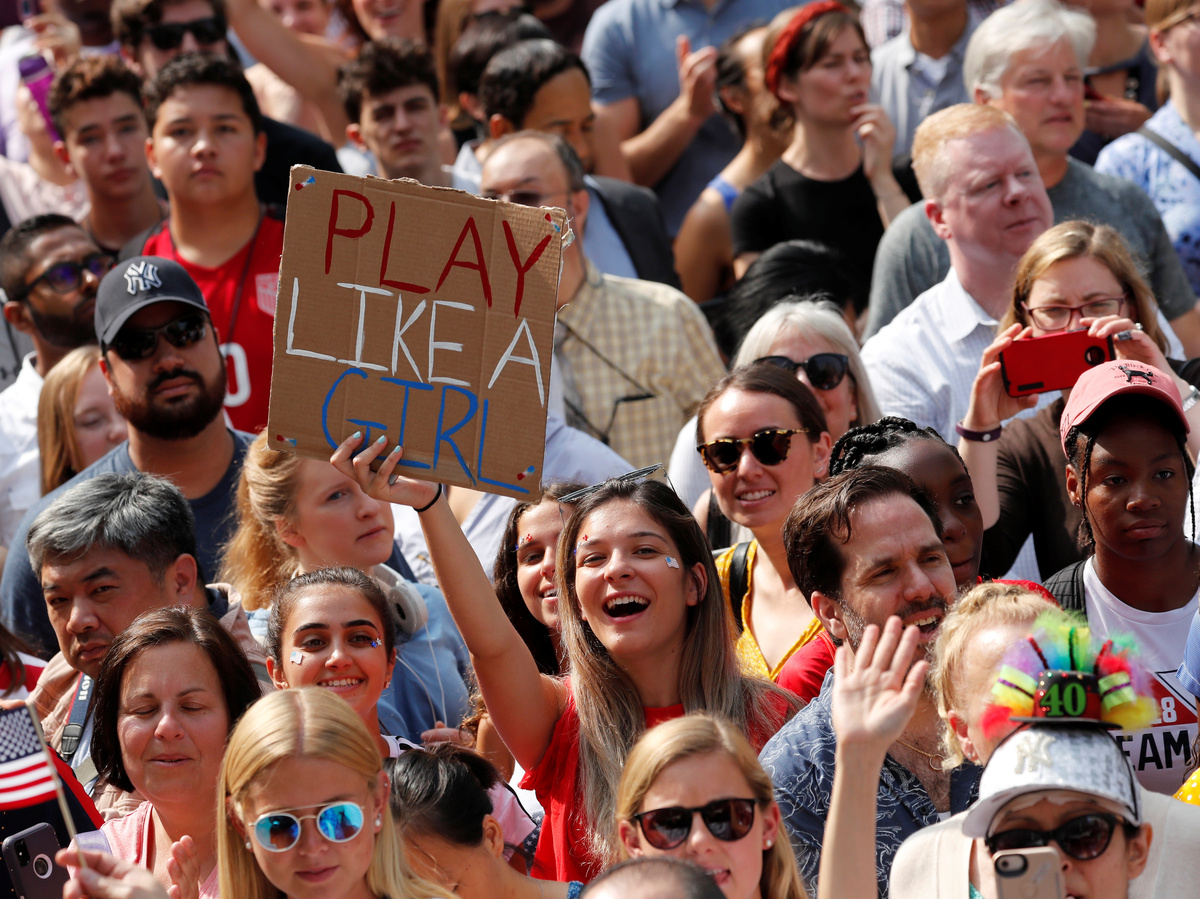 Fans of the U.S. Women's National Team cheer as the World Cup champions parade up Broadway in New York Wednesday.

The procession also included a brass band, a double-decker bus, and a phalanx of bagpipers, and rows of motorcycles, beeping their horns. An escort of police vehicles rounded out the parade.

In one street near City Hall, dozens of yellow-vested municipal workers stood behind a barricade, their large pushbrooms at the ready to start the job of cleaning up.

The festivities honored the national team's remarkable run in France, where the U.S. women went undefeated in the World Cup, turning away determined challenges from talented and physical squads such as France, Spain, England and the Netherlands.

Amid the glee over the team's on-field accomplishments, the parade also highlighted the pay disparity between the U.S. national soccer teams: Despite enjoying more success and popularity, the women are paid less than the men, and the female athletes are heading to mediation to try to resolve a lawsuit they filed against U.S. Soccer in March.

On one float near the end of the parade, New York Gov. Andrew Cuomo stood waving a U.S. flag behind defender Crystal Dunn and forward Tobin Heath — who led the crowd in chants of "Equal pay!"

"Parades are cool," a sign held by Dunn read. "Equal pay is cooler."

Despite facing spirited challenges from ascendant European teams, the U.S. women were wildly successful in France. They set a record by scoring 26 goals in the tournament, with a differential of 23 goals — another record that speaks to the defense played by Dunn and other backliners. 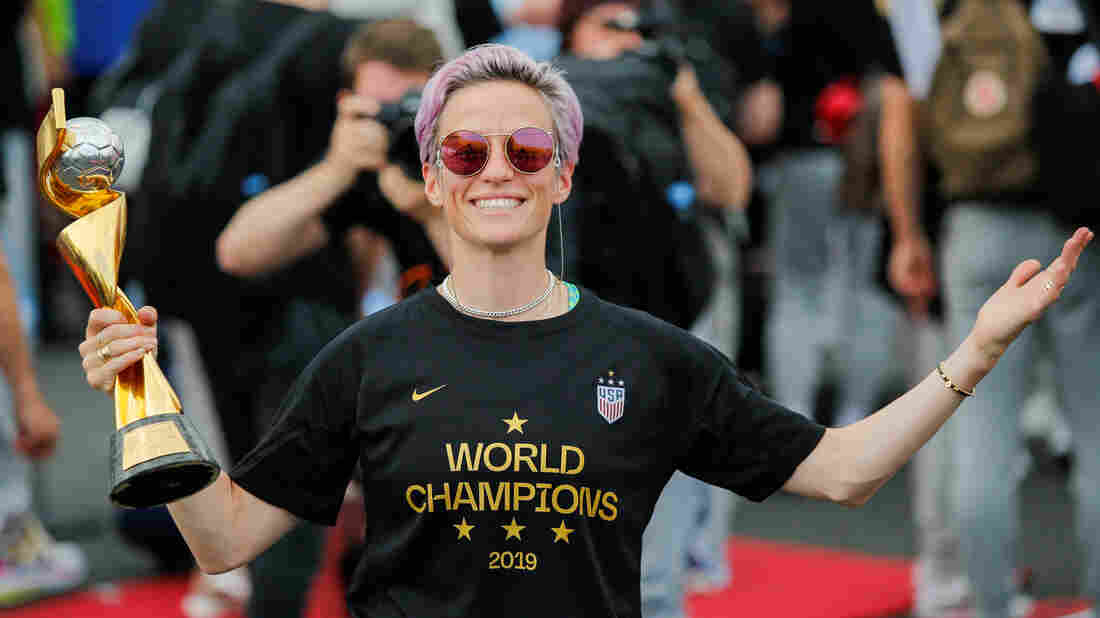 The U.S. Women's National Team is being honored by a ticker tape parade in New York Wednesday. Here, Megan Rapinoe smiles as she holds the FIFA Women's World Cup trophy as the team arrives at the Newark International Airport. Eduardo Munoz/Reuters hide caption 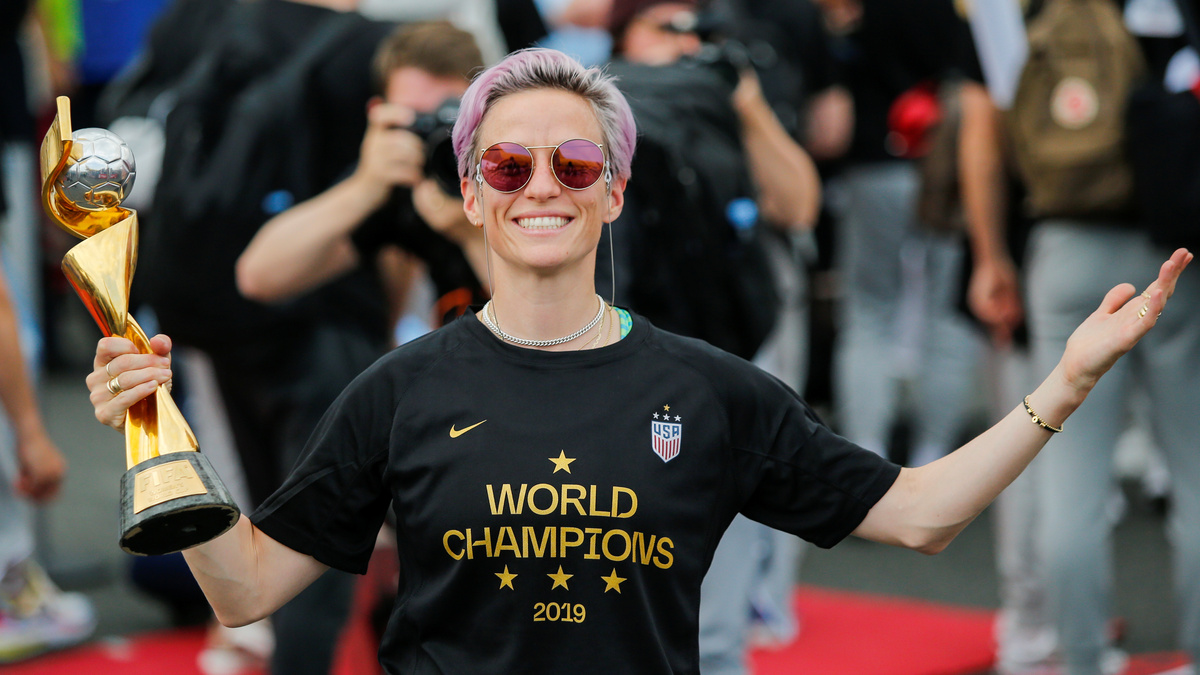 The U.S. Women's National Team is being honored by a ticker tape parade in New York Wednesday. Here, Megan Rapinoe smiles as she holds the FIFA Women's World Cup trophy as the team arrives at the Newark International Airport.

They succeeded despite a number of potential distractions, including the pay dispute. Even President Trump's criticism of Rapinoe, and a mini-controversy over whether the team would visit the White House if it won the title, did not shake the team's focus on delivering on its promise as one of the most talented teams the U.S. has ever put on the field, in any sport.

Since returning from the title match in Lyon, members of the women's team have been in high demand, appearing on Good Morning America, the Today show, ESPN and other media outlets. After the hoopla dies down a bit, they'll embark on a victory tour, starting with an Aug. 3 match against the Republic of Ireland.

For Rapinoe and other veterans of the U.S. women's team, New York's Canyon of Heroes is familiar ground: They were treated to a parade there in 2015, after their last World Cup win.

Since the late 1800s, the famous parade route has honored visiting royalty, astronauts, military leaders and war veterans. It has also celebrated Olympic medalists and championships by New York's Yankees and Giants.