Accessibility links
Trump Adviser: On Mideast Peace Plan, 'We Are Aiming For The Home Run' "We are aiming for a comprehensive solution," Special Representative for International Negotiations Jason Greenblatt tells NPR. "We're prepared to weather criticism from all sides." 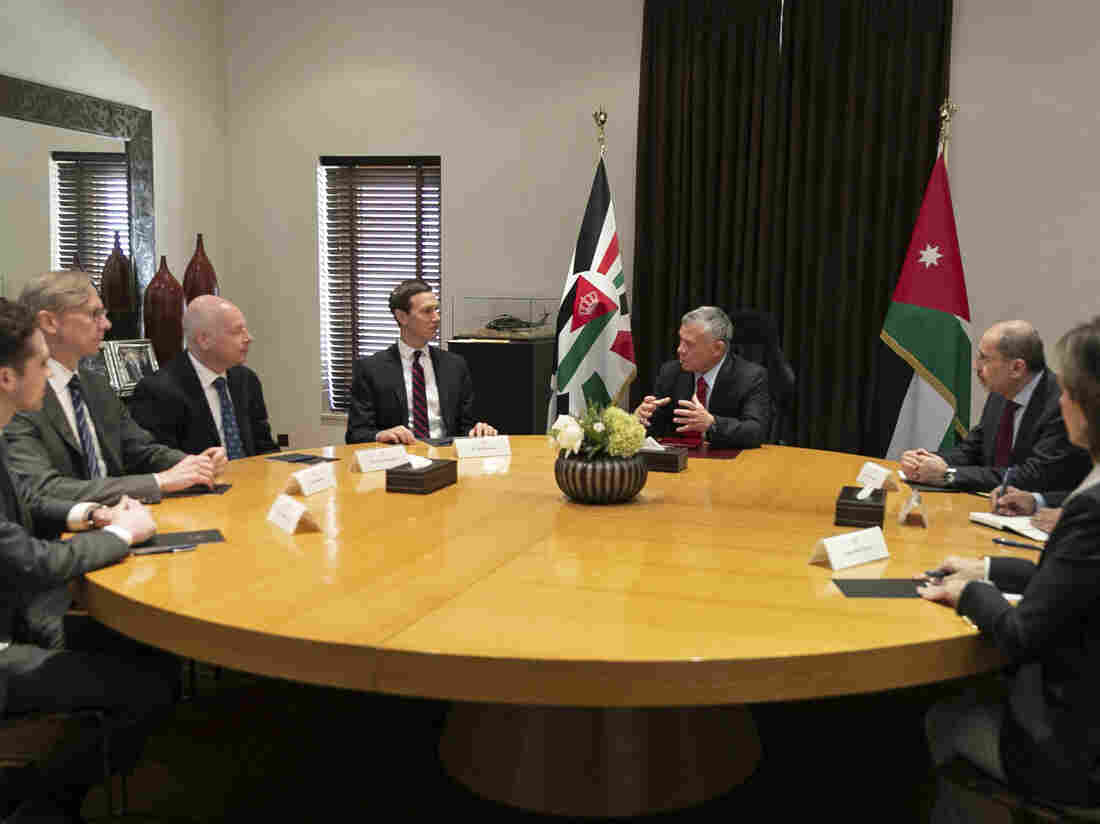 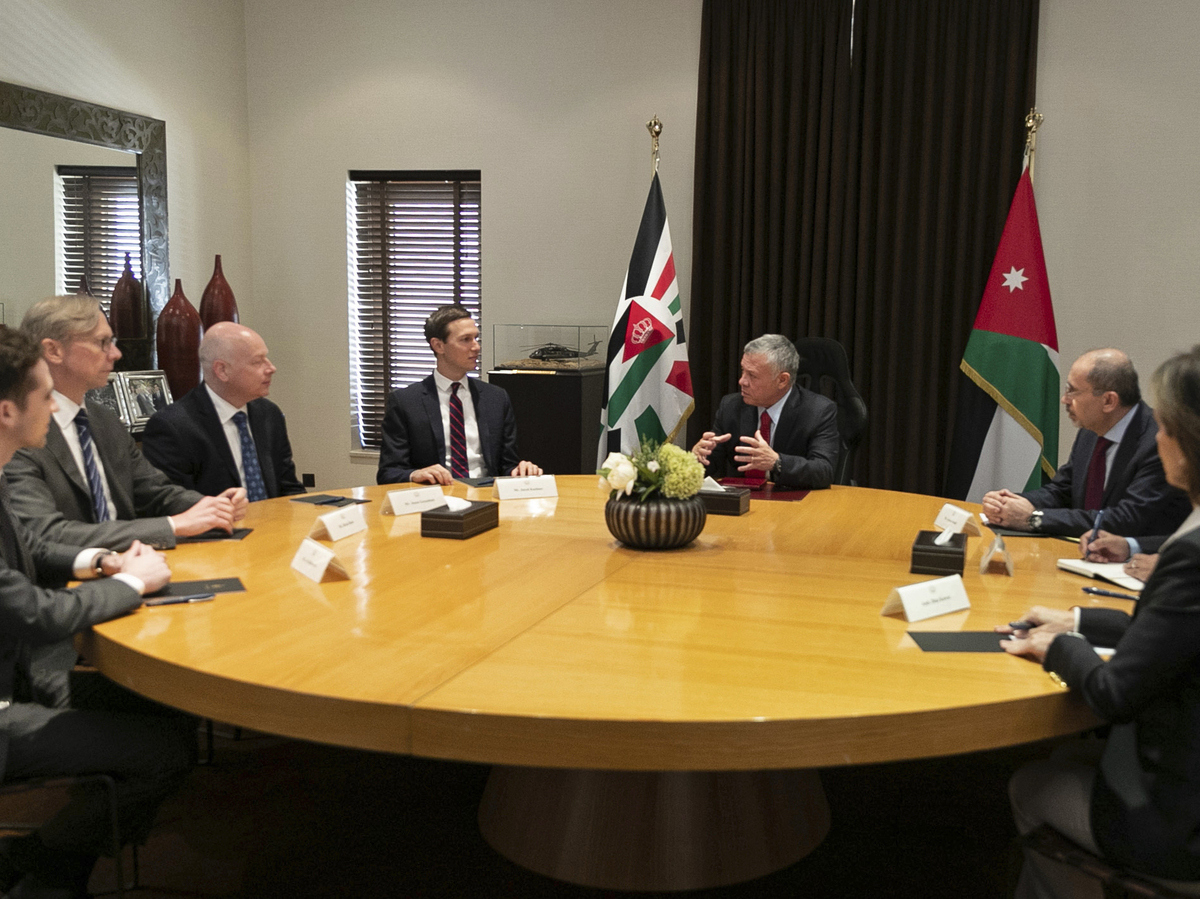 The Trump administration is swinging for a "home run" in the proposal it's crafting for peace between Israelis and Palestinians, but it isn't going to offer "goodies" to get the Palestinians to start negotiations, a key White House adviser told Ari Shapiro on NPR's All Things Considered.

Special Representative for International Negotiations Jason Greenblatt is an assistant to President Trump and has traveled to the Mideast repeatedly over the past two years as part of the peace plan effort by Trump's senior adviser and son-in-law, Jared Kushner.

In June, the White House released an investment plan for the Palestinian territories, but the money won't start flowing until there's progress on a political solution. That plan hasn't yet been unveiled. 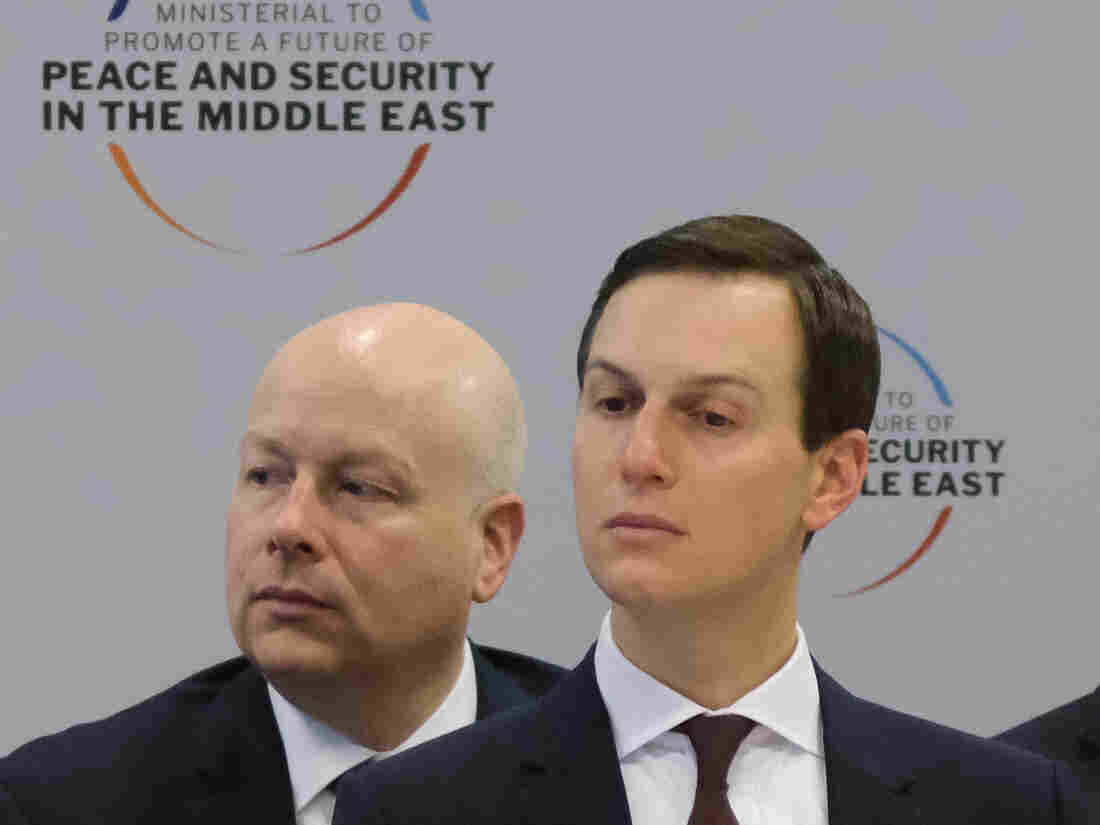 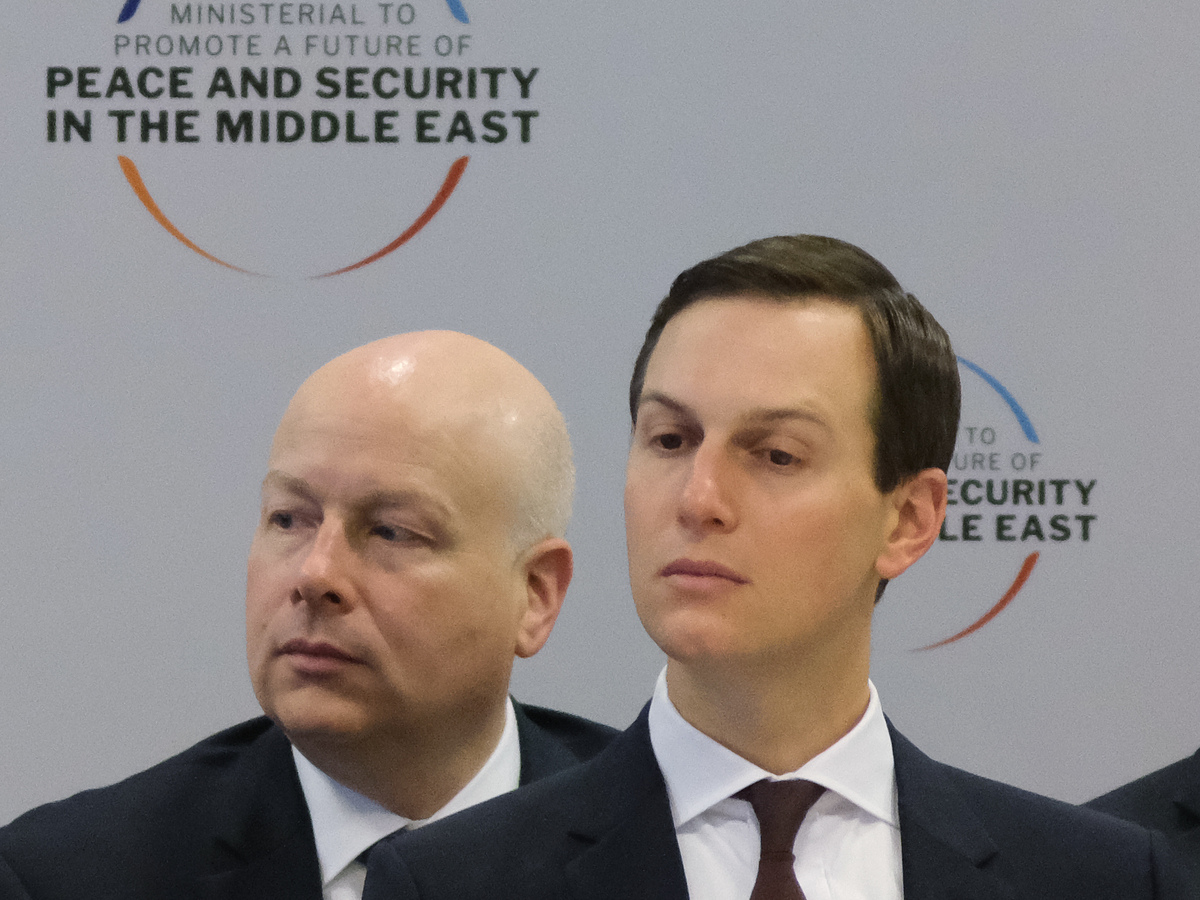 People around the region are looking for the political plan to address the big questions, including whether there will be an independent Palestinian state, the status of Jerusalem, how to ensure security for Israel, what to do for Palestinian refugees and how to end Israel's military occupation of the West Bank.

But progress has been slow. And the Palestinian leadership has broken off contacts to the Trump White House since the U.S. endorsed Israel's claim that Jerusalem is its capital and moved the U.S. Embassy there last year.

For New U.S. Mideast Peace Envoy, It Will Be A Long Road To 'Ultimate Deal'

The embassy move was just one of several times Trump's White House has sided against the Palestinians. It also closed the Palestinian representation office in Washington, D.C., and has cut hundreds of millions of dollars in aid to Palestinians, including for health clinics and food programs for impoverished people.

Greenblatt and Kushner have promoted their plan as a break from the past, whether it succeeds or fails. Highlights of Greenblatt's interview with NPR, edited and condensed for clarity, follow.

On building trust with the Palestinians so they will negotiate on a U.S. plan

We would love to have a relationship of trust and confidence, which we do have with many, many ordinary Palestinians. But if the Palestinian leadership ... if they choose to cut us off to the detriment of their people and to the detriment of the possibility of peace, that's their choice. We aren't going to give them the so-called carrots or, you know, goodies in order to buy them to come to the table, because it's never worked before. 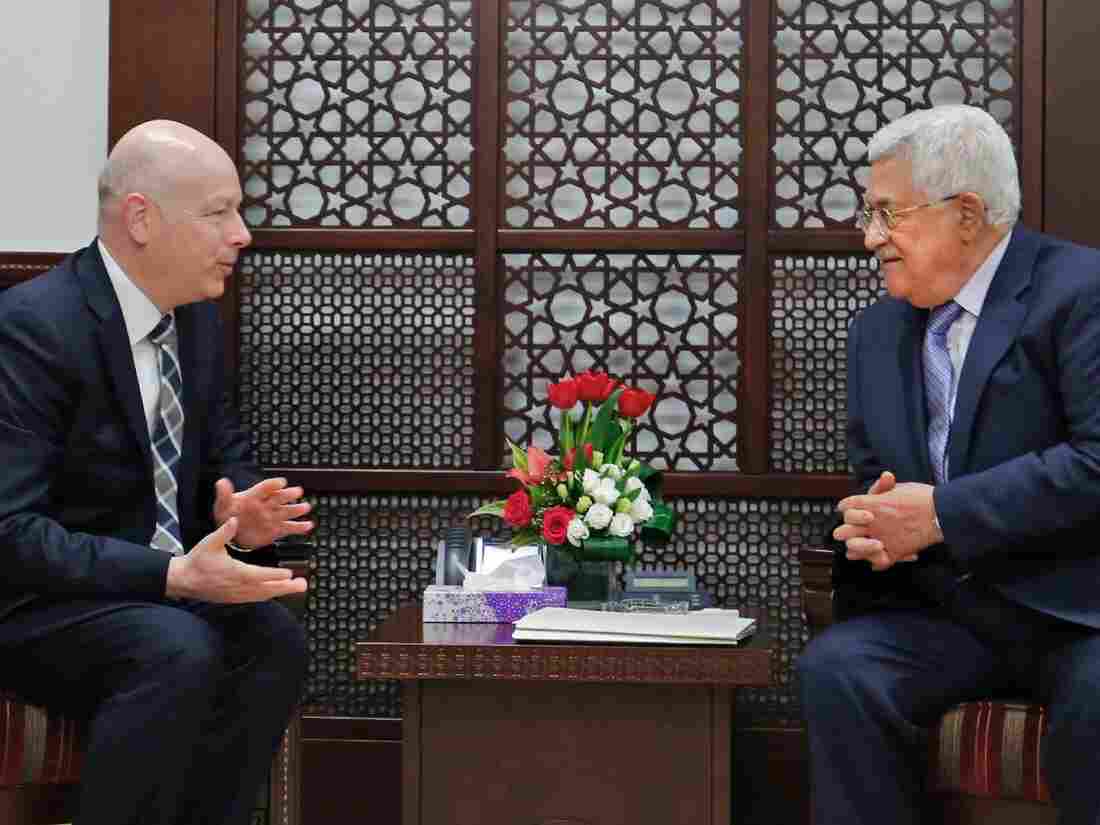 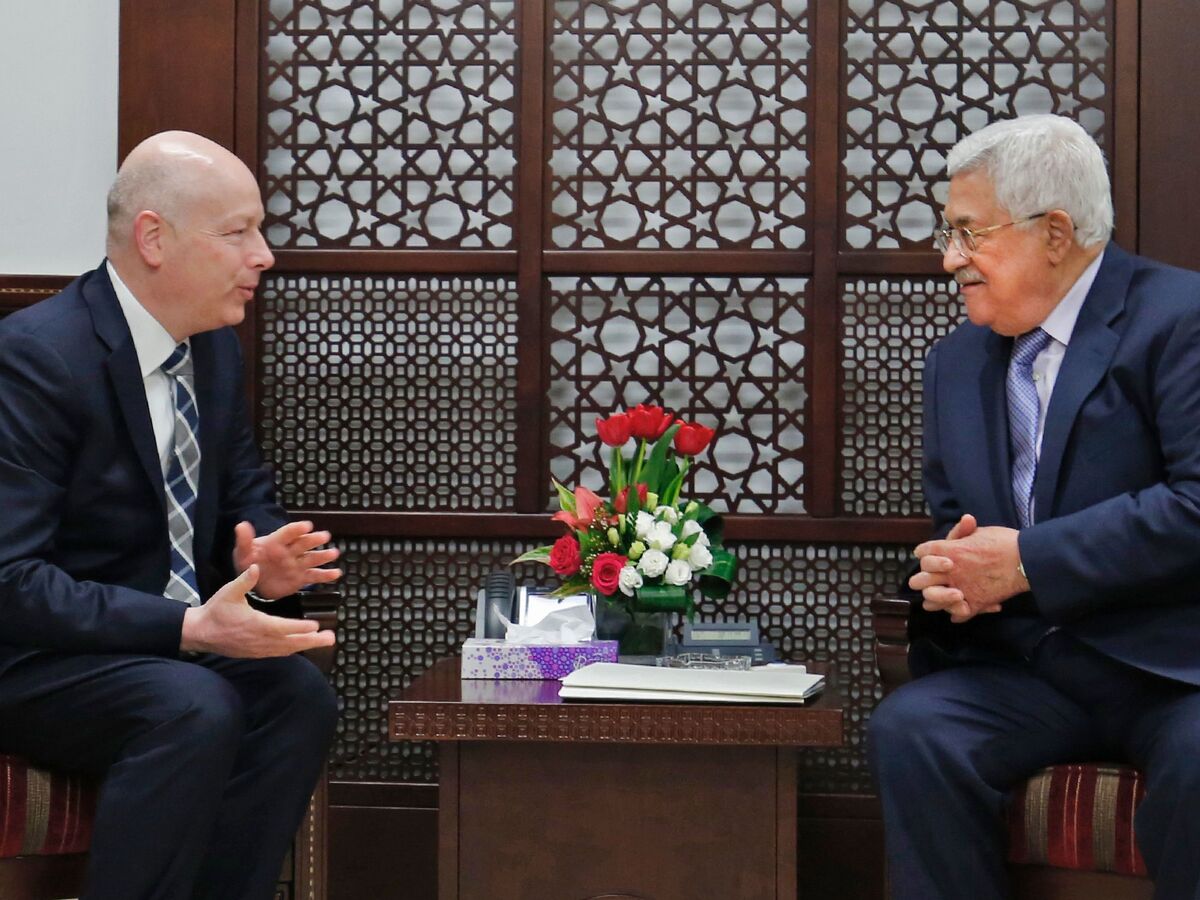 On promising investment to the Palestinians while simultaneously cutting U.S. aid

But at the moment ... we have not only non-engagement but actually boycotts undermining ... all of our efforts. Insults hurled at the president, our ambassador to Israel, many members of the administration. It is not a wise use of U.S. taxpayer money to keep feeding into a system where there is no positive momentum.

On criticism of the U.S. taking an all-or-nothing approach instead of confidence-building steps

We are aiming for a comprehensive solution. The interim solutions have been tried before. ... I'm not saying we will hit the home run. But at the moment, we are aiming for the home run where we couple a very impressive economic plan that was created by Jared Kushner and a dedicated team here from the U.S. administration, as well as peer-reviewed by outsiders.

It'll be stapled to a political plan. I think that's an important point, because I know that there's been a lot of criticism that we're trying to buy off the Palestinians, that we're trying to bribe the Palestinians, that there's no political plan. All of that is completely untrue. When everybody sees the two parts to the plan, I think it'll make sense to everybody. We're prepared to weather criticism from all sides.

On the timing for unveiling the administration's proposal

We obviously have the [September] Israeli election and government coalition formation looming, and the president hasn't made his decision yet [about releasing the plan]. We're protecting something very delicate. We want to make sure that it succeeds. So we want to air it at the right timing, and we will know the decision pretty soon. ... The plan is pretty much finished.

On whether the plan will come before the 2020 U.S. election

I think it would be a missed opportunity if we didn't. That's a long way off.

On the plan's framework

The framework is essentially figuring out how to keep everybody, Israelis and Palestinians ... safe, secure, prosperous. Better lives.

And what we've done is ... roughly a 60-page document, plus some exhibits that will allow everybody, from teenagers to much older people, to understand how we think the conflict can be resolved — with a lot of hard work, compromise and of course negotiation — and allow people to ask themselves the tough question of "Will our lives be better off this way? Are we better off making these compromises so that once we sign" — we the Palestinians, in this case — "can create something unique and special and wildly successful?"

And with the Israelis, be able to continue to be successful but also feel safe and secure and accepted into the neighborhood that they live in, which is a rough and difficult neighborhood at times.