Accessibility links
Labor Secretary Acosta Defends Handling Of Jeffrey Epstein Plea In Florida Acosta is under scrutiny for the 2008 deal he oversaw when he was a U.S. attorney in Florida, now that prosecutors in New York have brought a new case in which Epstein could face 45 years in prison. 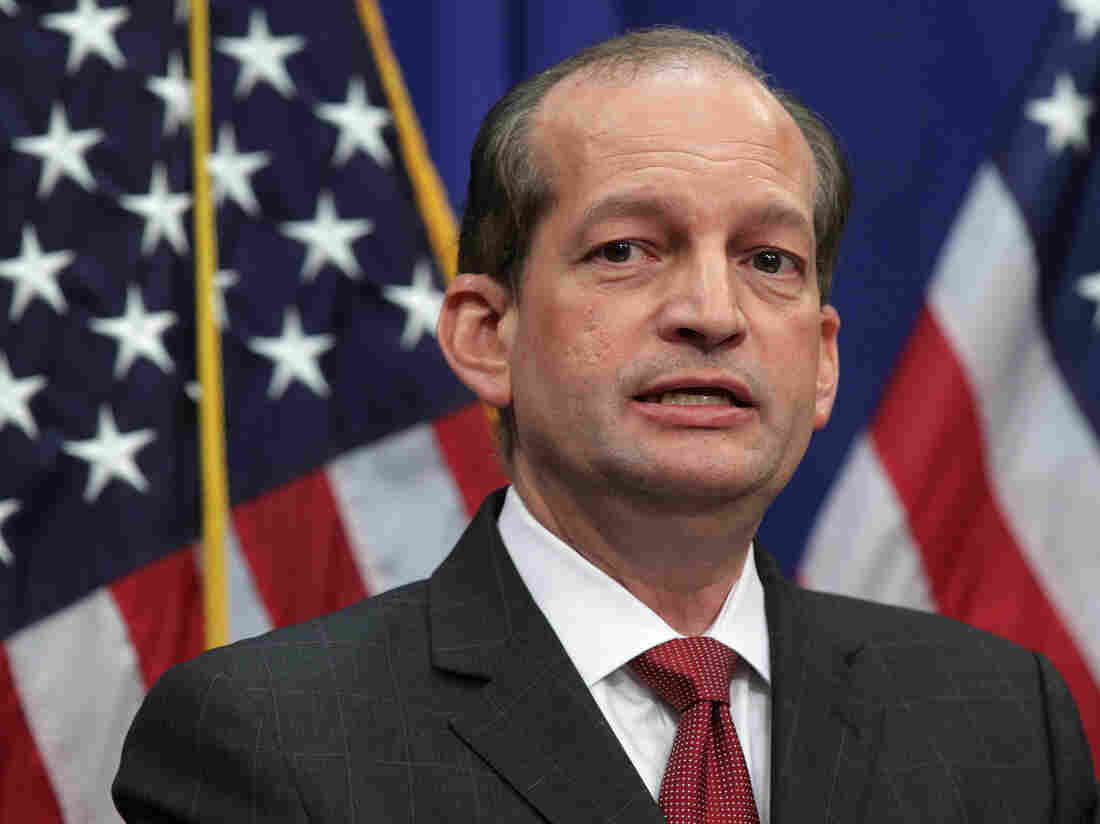 Labor Secretary Alex Acosta on Wednesday defended a 2008 plea deal made with Jeffrey Epstein, a wealthy financier accused of yearslong sex trafficking of minors. The deal was made when Acosta was a U.S. attorney in Florida. Alex Wong/Getty Images hide caption 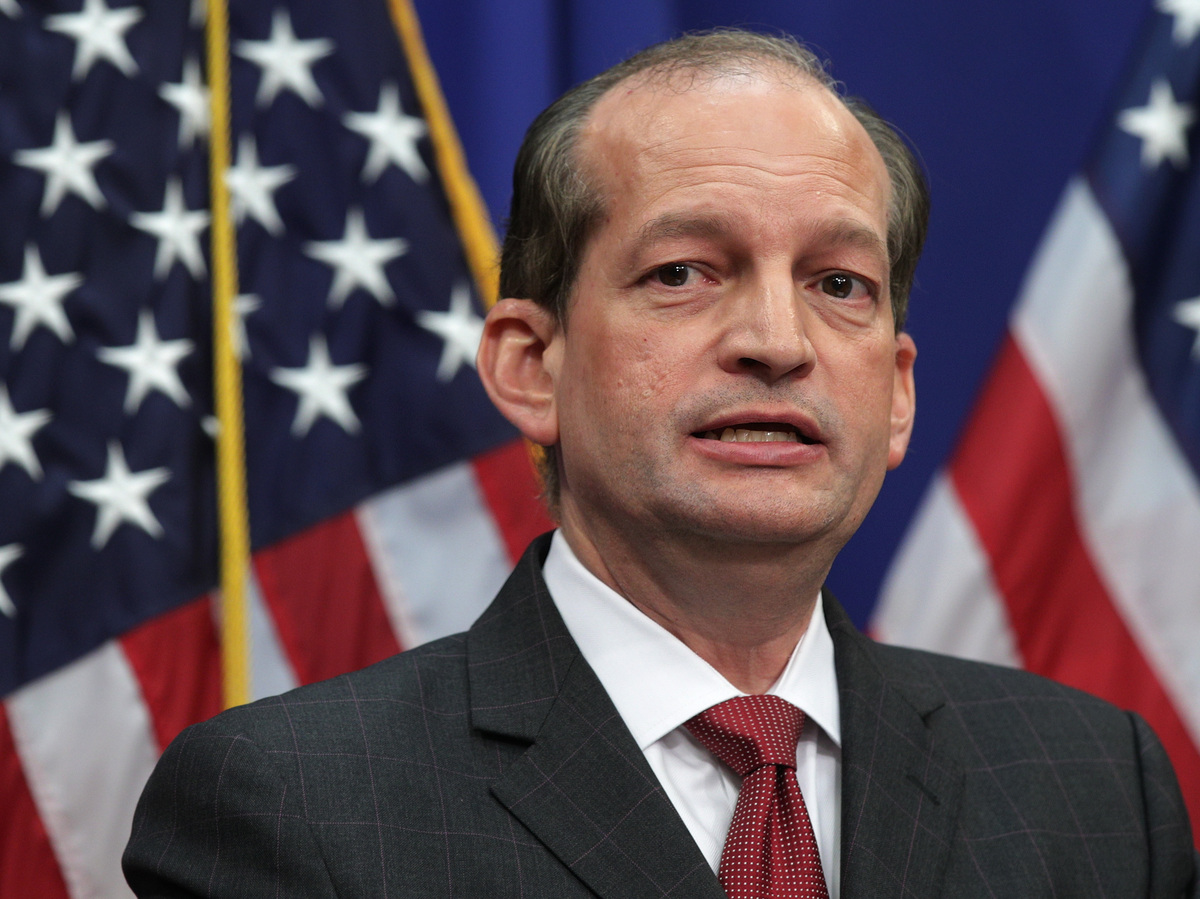 Labor Secretary Alex Acosta on Wednesday defended a 2008 plea deal made with Jeffrey Epstein, a wealthy financier accused of yearslong sex trafficking of minors. The deal was made when Acosta was a U.S. attorney in Florida.

Labor Secretary Alex Acosta defended a 2008 plea agreement he oversaw as a U.S. attorney in Florida in which multimillionaire and accused sex trafficker Jeffrey Epstein got a light sentence in exchange for pleading guilty to state charges.

"Facts are important, and facts are being overlooked," Acosta told reporters at a news conference Wednesday.

Acosta has come under heavy scrutiny now that federal prosecutors in New York have brought a new case against Epstein, charging him with serious crimes, including sex trafficking of minors. If found guilty, Epstein could face up to 45 years in prison.

In 2007, Epstein was accused of recruiting dozens of girls, some as young as 13, for massages and sex at his mansion in Palm Beach, Fla. Under the terms of the 2008 deal, Epstein pleaded guilty to two counts of solicitation of prostitution (one with a minor under age 18) and was required to register as a sex offender. He was given immunity from federal prosecution, served 13 months in county jail and was allowed to spend his days on work release at his Palm Beach office.

Many victims have complained that they were not informed of the government's deal and were unhappy with it. In February, U.S. District Judge Kenneth Marra ruled that the failure by prosecutors to inform victims about the agreement violated the Crime Victims' Rights Act.

Acosta said Wednesday that his office had handled the case appropriately. He said the Epstein case was complicated by the fact that it had originated with state rather than federal authorities and that many of the young victims were scared by the prospect of testifying. He said that telling the victims the deal involved a mechanism for restitution could have jeopardized their case, by allowing Epstein's attorneys to paint the victims as motivated by money.

Such a deal might not look very good in retrospect, Acosta said, explaining that it was the prosecutors' calculation that it was better to secure a guilty plea and register Epstein as a sex offender than risk going to trial and potentially see Epstein go free. "There is a value to a sure guilty plea, because letting him walk — letting what the state attorney was ready to do go forward — would have been absolutely awful," he said.

In Acosta's telling, it was the U.S. attorney's office that intervened when state prosecutors failed to charge Epstein with appropriately serious crimes. He said that a grand jury had returned only a single charge of solicitation of prostitution and that Epstein would have faced no jail time if not for the federal prosecutors' insistence on a stricter deal.

He also blamed Florida officials for the work release granted to Epstein during his sentence. Acosta called the work release "BS" and said that because the non-prosecution deal was an agreement between the state and Epstein, it was the state's authority to grant him such freedom.

Democrats, including Senate Minority Leader Chuck Schumer and House Speaker Nancy Pelosi, have called on Acosta to resign. "It is now impossible for anyone to have confidence in Secretary Acosta's ability to lead the Department of Labor. If he refuses to resign, President Trump should fire him," Schumer said.

Acosta gave no indication on Wednesday of an intention to resign as labor secretary, and he described his relationship with the president as "outstanding."

Epstein amassed his wealth as a money manager and investor for clients such as Les Wexner, the founder of brands including Victoria's Secret and Bath & Body Works. He has long surrounded himself with the rich and famous, including President Trump and former President Bill Clinton, who has distanced himself from Epstein.

On Tuesday, Trump defended Acosta and said the plea deal happened many years ago. "What I do know is that he's been a really, really great secretary of labor. The rest of it, we will have to look at," he said.

Trump was quoted in a 2002 New York magazine story as calling Epstein a "terrific guy" and saying that Epstein "likes beautiful women as much as I do, and many of them are on the younger side."

The president said Tuesday that he had had a falling out with Epstein and that he didn't think he had spoken to Epstein in 15 years.

House Oversight Committee Chairman Elijah Cummings of Maryland invited Acosta to testify at a July 23 hearing about the deal. Cummings and other House Democrats also sent a letter to the Justice Department's Office of Professional Responsibility in which they said: "There are significant concerns with Secretary Acosta's actions in approving an extremely favorable deal for an alleged sexual predator while concealing the deal from the victims of Mr. Epstein's crimes, which a judge found violated the Crime Victims' Rights Act."

In a letter to Sen. Ben Sasse, R-Neb., this year, the Justice Department confirmed that its Office of Professional Responsibility is investigating whether lawyers committed misconduct in the handling of the earlier case against Epstein.

A Justice Department spokesman told NPR on Wednesday that the review is "ongoing," with no timetable for its completion. Acosta said at the news conference that he would cooperate with the probe and sit for an interview "even though I don't have to."

The Office of Professional Responsibility, which conducts internal investigations involving allegations of professional misconduct, has faced criticism in the past over its perceived slow pace and lack of transparency. The Justice Department said the Privacy Act "significantly limits the department from disclosing information concerning individual misconduct allegations."