Accessibility links
Trump Backs Off Census Fight, Orders Data-Sharing On Citizenship Status Dropping his effort to include a citizenship question on the 2020 census, Trump says he wants agencies to provide information they have on citizenship, noncitizenship and immigration status. 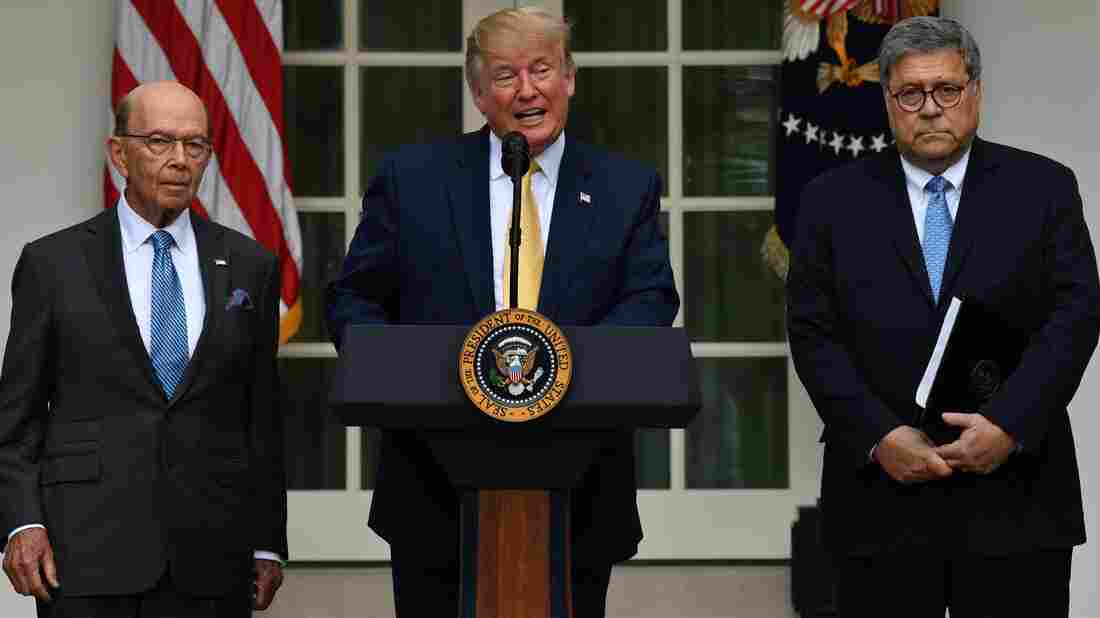 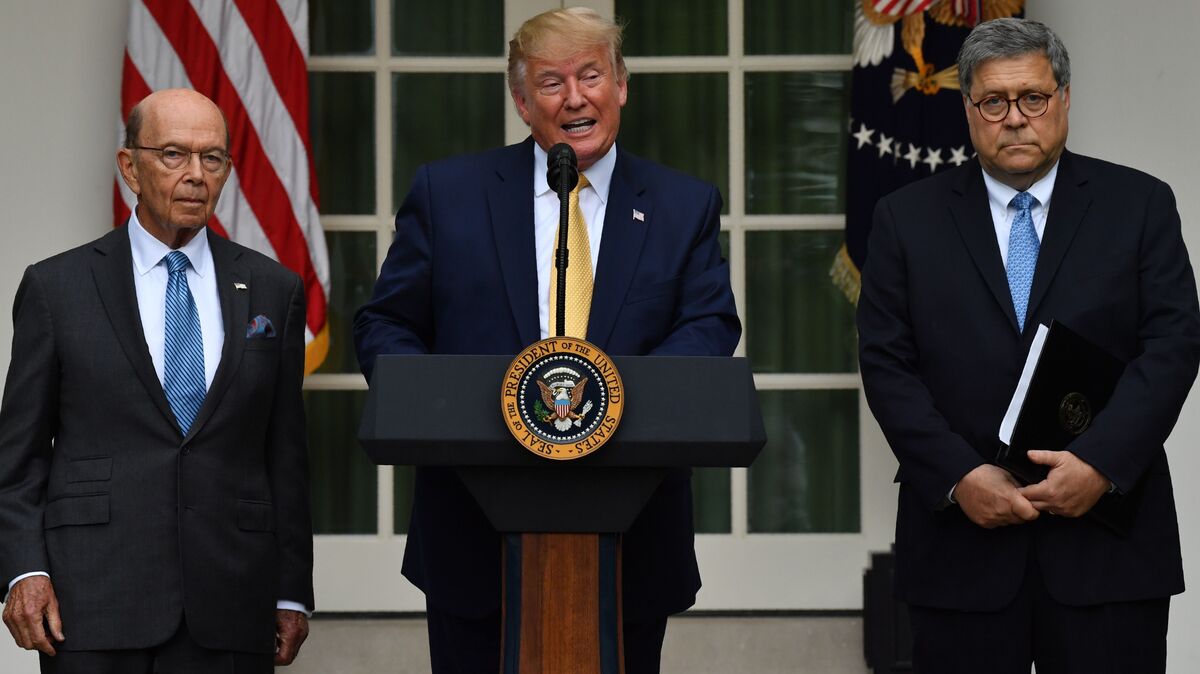 President Trump, flanked by Secretary of Commerce Wilbur Ross (left) and Attorney General William Barr, delivers remarks on citizenship and the census in the Rose Garden at the White House on Thursday.

President Trump announced Thursday he would sign an executive order to obtain data about the U.S. citizenship and noncitizenship status of everyone living in the United States.

In a Rose Garden ceremony, Trump said he would drop efforts to include a citizenship question on the 2020 census. Instead, his executive order will direct all U.S. agencies to provide the Department of Commerce all information they have on U.S. citizenship, noncitizenship and immigration status.

"We have great knowledge in many of our agencies," Trump said, flanked by Attorney General William Barr and Commerce Secretary Wilbur Ross. "We will leave no stone unturned."

In backing down from the legal fight, Trump appears to be doing what the Census Bureau encouraged over a year ago.

Before Ross decided to add a citizenship question to the 2020 census, the Census Bureau's acting director, Ron Jarmin, and other officials had tried to convince him to use existing government records about U.S. citizens and noncitizens.

Some of the steps Trump outlined are already underway. The Social Security Administration and Department of Homeland Security, at Ross's direction, had already entered into agreements with the Census Bureau to provide the bureau with information on noncitizens.

Barr said the government had "ample justification" to inquire about citizenship status on the census. It just didn't have enough time.

He said any effort would be immediately challenged in the courts. He said there was no time to fight the matter in court without jeopardizing the U.S. government's ability to carry out the census itself.

"Put simply, the impediment was logistical, not legal," he said.

The question the administration had wanted to include was, "Is this person a citizen of the United States?"

Justice Department and Commerce Department officials have said that printing has started for paper forms that do not include the question.

Last month, the Supreme Court blocked the citizenship question from the census for now. A majority of the justices rejected the administration's original stated justification — to better protect the voting rights of racial minorities — for appearing "contrived." Ross formally approved adding the question last year after pressuring Commerce officials for months to find a way to include it.

The court's decision did leave open the possibility for the administration to make another case for the question.

Census Bureau research suggests including the question would have been highly likely to discourage an estimated 9 million people from taking part in the constitutionally mandated head count of every person living in the United States. Critics of the question worry that would have led to undercounts of immigrant groups and communities of color, especially among Latinx people.

That could have had long-term impacts on how political representation and federal funding are shared in the U.S. through 2030. Census results determine each state's share of congressional seats and Electoral College votes for the next decade. They also guide how an estimated $880 billion a year in federal tax dollars is distributed for schools, roads and other public services in local communities.

With just over six months left until the official census kickoff in rural Alaska, any changes to census forms could have jeopardized the final preparations for the count. Census Bureau officials have testified that the deadline for finalizing the questionnaire could be pushed back to Oct. 31, but only "with exceptional effort and additional resources."

Before Thursday's announcement that the administration was shifting away from the census push, Trump had been vocal in not wanting to back down.

This week, Trump's reelection campaign sent emails to ask supporters to complete an online survey that asked whether they believed the 2020 census should ask people if they are "American citizens."

"We can't Keep America Great for all Americans if we don't know who's in this country," said the email, signed by "Team Trump 2020."

Earlier Thursday, the House was planning a vote on July 16 to hold Barr and Ross in contempt of Congress for refusing to comply with subpoenas related to the oversight committee's investigation regarding the citizenship question.

"For months, Attorney General Barr and Secretary Ross have withheld key documents subpoenaed by the Committee on a bipartisan basis without asserting any valid legal justification for their refusal. These documents could shed light on the real reason that the Trump Administration tried to add the citizenship question," oversight Chairman Elijah Cummings said in a statement on Thursday.

He urged Barr and Ross to comply with the subpoenas so Congress can avoid a contempt vote.