Accessibility links
Teachers Sue Department Of Education Over Student Loans That Weren't Forgiven One of the biggest U.S. teachers unions is suing the Department of Education, alleging a loan forgiveness program for millions of public service workers violates federal law and the Constitution. 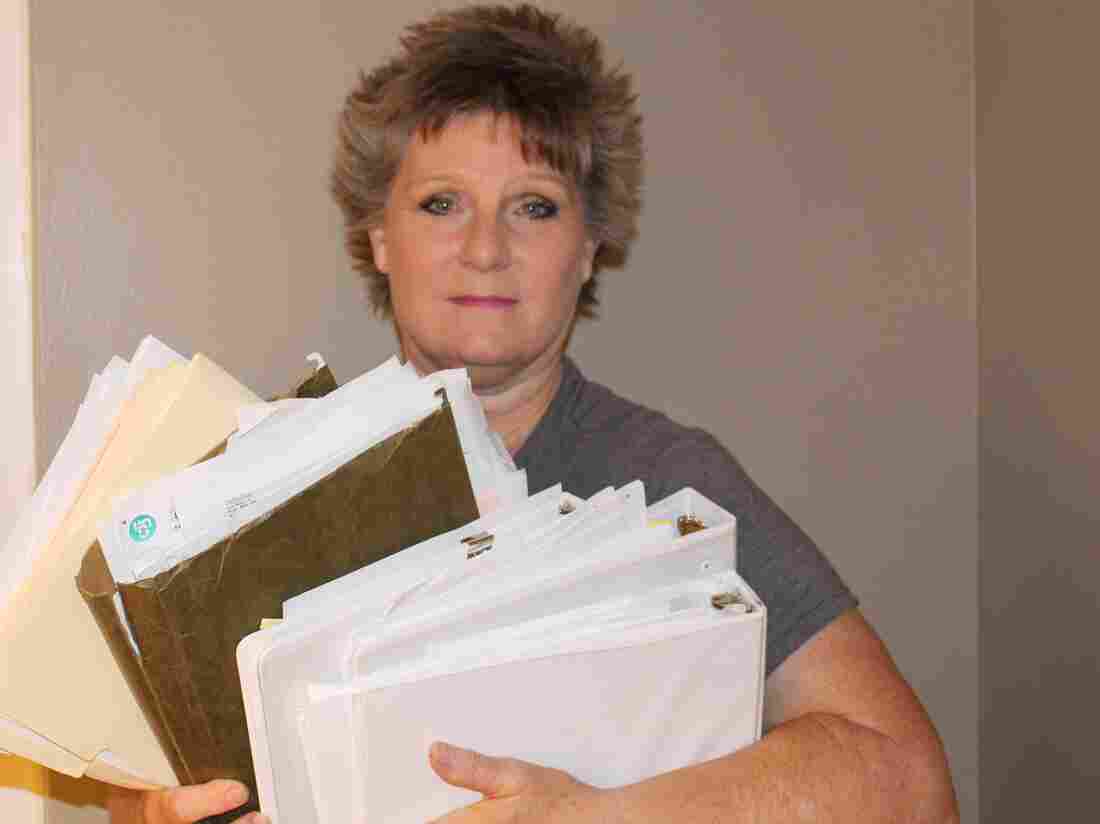 Debbie Baker, who taught in public schools near Tulsa, Okla., had nearly $76,000 in student loans that she thought would be forgiven but weren't. She was told she didn't qualify because she had the wrong type of loan. Courtesy of Kelly Baker hide caption 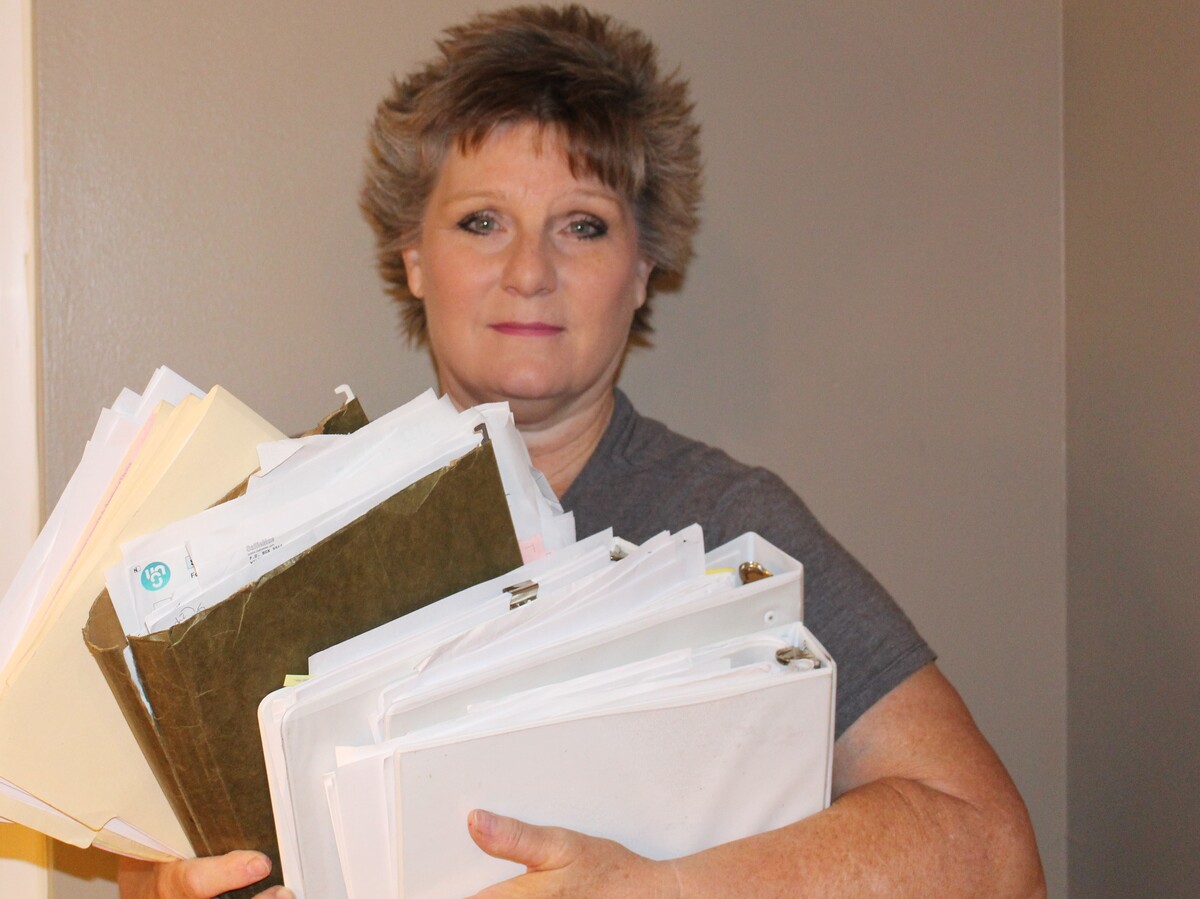 Debbie Baker, who taught in public schools near Tulsa, Okla., had nearly $76,000 in student loans that she thought would be forgiven but weren't. She was told she didn't qualify because she had the wrong type of loan.

Debbie Baker thought she qualified for a federal program that helps teachers such as her, as well as nurses, police officers, librarians and others. The Department of Education program forgives their federal student loans if they make their payments for 10 years and work in public service.

For 10 years, Baker, who was a public school teacher in Tulsa, Okla., checked in with loan servicing companies and was told she was on track.

"I said, 'I'm qualifying for public service loan forgiveness,' and they said, 'OK, great,' " she says.

But it turns out that her $76,000 in student loans didn't get forgiven. Baker was finally told she was in the wrong type of loan. If she'd known that at the beginning, she could have switched loans and ended up qualifying. But she says nobody ever told her.

"When this hit ... I didn't know whether to cry, throw up, get mad," she says. "I honestly did not think the federal government would do this to someone."

Now, Baker is a plaintiff in a lawsuit being brought by one of the biggest teachers unions in the country against the Department of Education. The suit alleges the loan forgiveness program for millions of public service workers is in such a shambles that it violates federal law and the Constitution.

Have you had problems qualifying for the Public Service Loan Forgiveness program? Share your story with NPR.

The American Federation of Teachers filed the lawsuit Thursday in federal court. In the complaint obtained by NPR, the union is asking the court to order the department to fix the Public Service Loan Forgiveness program so that it meets legal standards. It's also asking the department to come up with an appeals process for people who believe they have been treated unfairly.

Congress created the program more than a decade ago to encourage public service. So, if you make loan payments for 10 years and you work in a qualifying job for the government or a nonprofit, the program promises to forgive the remainder of your federal student loan debt.

Why Public Service Loan Forgiveness Is So Unforgiving

'I Am Heartbroken': Your Letters About Public Service Loan Forgiveness

That promise sounded really good to a lot of people. More than 1 million have filed official paperwork to take part in the program. But there's a problem.

"The promise is broken, virtually all the time," says Randi Weingarten, the president of the American Federation of Teachers. "This is a debacle."

"The Department of Education just cannot seem to get this right," says Christopher Peterson, a law professor at the University of Utah and a former top attorney at the Consumer Financial Protection Bureau. "They keep making mistakes and are not appropriately administering this program that Congress has created."

By the department's last count, only 1% of the people who think they've made their 10 years of payments and apply for loan forgiveness are getting approved.

If you took all the people getting rejected and got them together in one place, Peterson says, you'd have "football stadiums full of nurses, firefighters, teachers, law enforcement officers that are seeking to have their debts forgiven."

He says they've made "all of these payments under the impression that they were on track, and now they're being turned away in droves."

There are different kinds of federal loans and a wide array of payment plans. If a student loan borrower is told they need to switch from one type to the other to qualify for the program, that's easy enough to do. For public service loan forgiveness, borrowers need to have a "direct federal loan." But if their loan servicer never tells them that, they can remain in the wrong type of loan or plan for years, thinking they're making progress toward loan forgiveness only to find out later that none of those payments counted towards forgiveness.

The teachers union lawsuit alleges that the Department of Education "knows of — but completely disregards — repeated misrepresentations made by [student loan] servicers to borrowers who are attempting to qualify ... resulting in unwarranted denials of loan forgiveness."

In other words, people like Baker aren't given the right information or advice, and many end up in the wrong types of loans or repayment plans and get unfairly disqualified. Government reports and investigations have found similar problems with borrowers getting bad information.

The lawsuit also alleges that loan servicers are having trouble keeping track of the number of qualifying payments people make — even when they are in the correct loan and payment plan and manage to do everything right.

Weingarten says the program is hurting the very people it's supposed to help. "It is so broken, it is so unfair that it violates our basic United States Constitution requirement of due process," she says.

Another problem with borrowers getting rejected after many years of thinking they were on track is that many make life decisions based on the expectation of loan forgiveness. 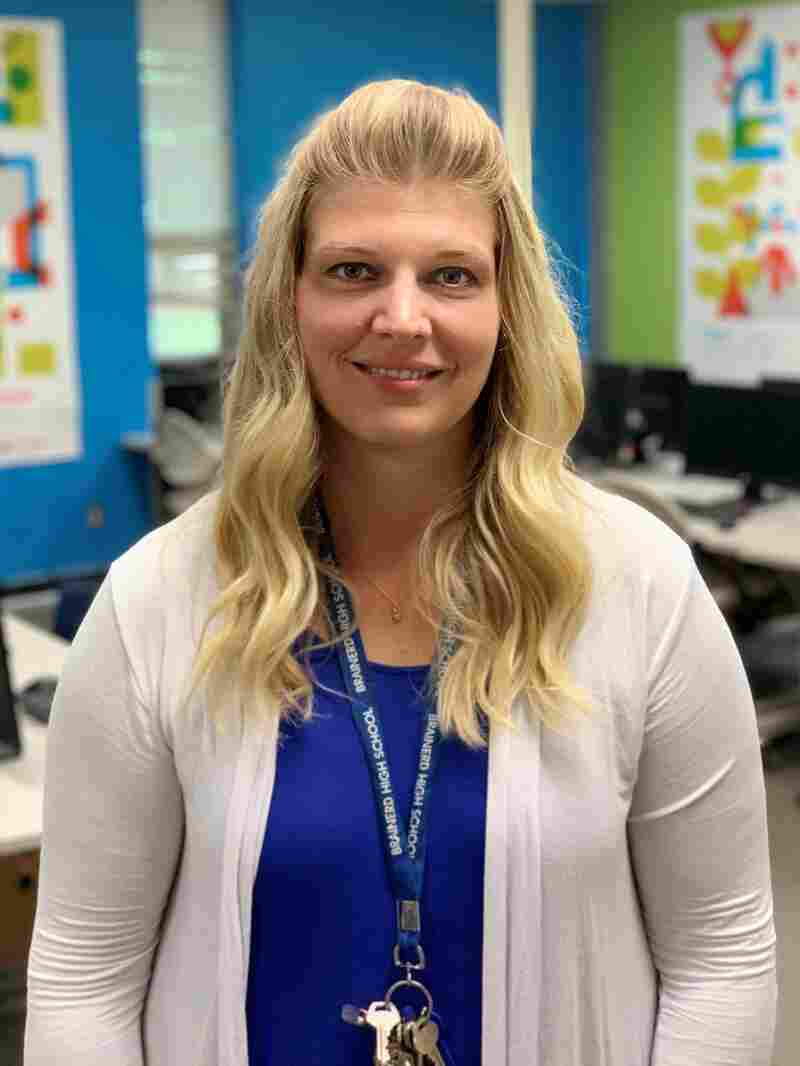 Janelle Menzel is a high school math teacher in Brainerd, Minn. After contacting her loan servicer repeatedly, trying to find a way to appeal, a call center worker told her, "Look, you just need to give up." Courtesy of Janelle Menzel hide caption 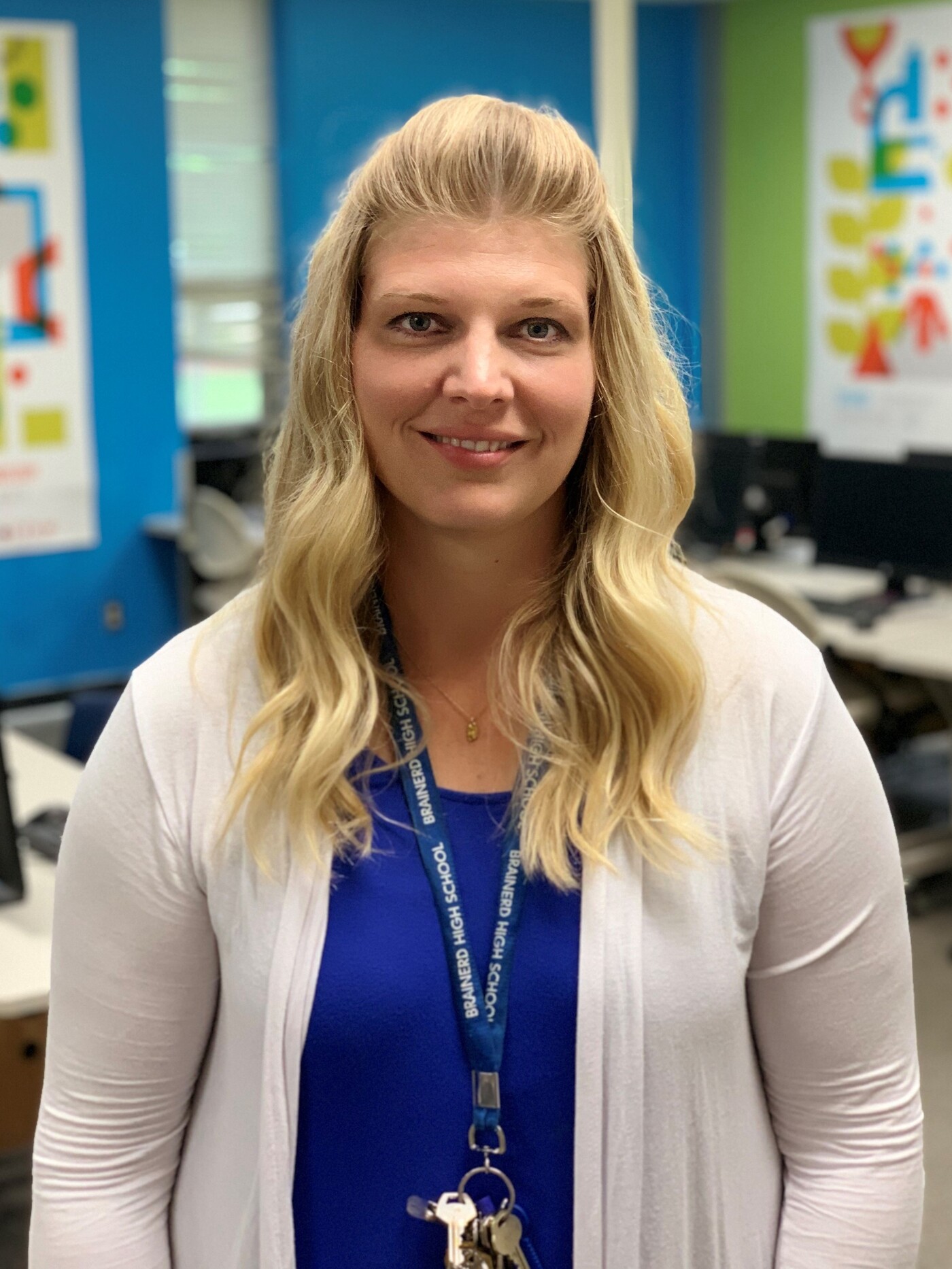 Janelle Menzel is a high school math teacher in Brainerd, Minn. After contacting her loan servicer repeatedly, trying to find a way to appeal, a call center worker told her, "Look, you just need to give up."

Janelle Menzel is a high school math teacher in Brainerd, Minn. She says people would ask her: "You have a degree in math, why are you teaching?" She says they would tell her she could make "so much more money in the private sector."

Menzel says she loves teaching. And she thought she was going to get her student loans forgiven, so financially she decided it made sense. "Oh yeah, definitely. That was a factor in it," she says.

But Menzel says that after 10 years of making payments, she was told by her loan servicer that she was in the wrong type of payment plan and couldn't qualify.

If a call center worker had told her that 10 years before, she easily could have switched into the right kind of loan. But she says nobody ever told her. And so that never happened.

She remembers after contacting her loan servicer repeatedly, trying to find a way to appeal, a call center worker told her, "Look, you just need to give up."

"And I remember sitting at the table watching my kids running around and playing and just thinking, man, I am stuck with this now," Menzel says. Thoughts of "the freedom that would come with being released of the student loan debt kind of came crashing in in that moment," she adds.

Congress passed a partial fix, called Temporary Expanded Public Service Loan Forgiveness, that was designed to help at least some borrowers. But the teachers union lawsuit alleges the Department of Education "has mismanaged [that program] as well." As of March 2019, only 3.6% of applications for that new program have been approved.

The Department of Education says it can't comment on ongoing litigation. But the department's press secretary, Liz Hill, said in a statement to NPR on Thursday, "the Department has improved internal processes and enhanced communications and outreach to borrowers." As an example, Hill pointed to an automated PSLF Help Tool that assists borrowers in determining whether they are in the right types of loans and payment plans, and which forms to submit.

She also pointed to a department blog post about avoiding common mistakes.

The teachers union is asking the court to order a new appeals process through which the department could use its power to forgive or "discharge" loans for borrowers who were treated unfairly.

But in its statement, the department says it "expects few people to be immediately eligible for a loan discharge under the Public Service Loan Forgiveness (PSLF) Program due, in large part, to complexities of the program Congress created more than a decade ago."

For those borrowers interested in the program, the Education Department says submitting an Employment Certification Form annually is key to making sure that borrowers are on track to qualify for forgiveness.

Navient, one of the nation's largest loan servicer companies, is not commenting on the lawsuit. But the company said in a statement to NPR, "We understand the frustration borrowers face in navigating a complex federal loan program, which is why we consistently advocate for policy reforms to simplify the system."

The Department of Education recently implemented a dramatic fix to a different program, TEACH Grants, that's now returning grant money to thousands of people who had grants taken away unfairly.

NPR is looking for people who have had problems qualifying for the Public Service Loan Forgiveness program. Share your story in the form here.