Accessibility links
Stream Brian Eno's New Album, 'For All Mankind' We asked an astronomer to listen to Brian Eno's reissued Apollo: Atmospheres & Soundtracks, which features brand new music, to answer the question: "What do we think space should sound like?"

The Music Of Our Spheres

The Music Of Our Spheres 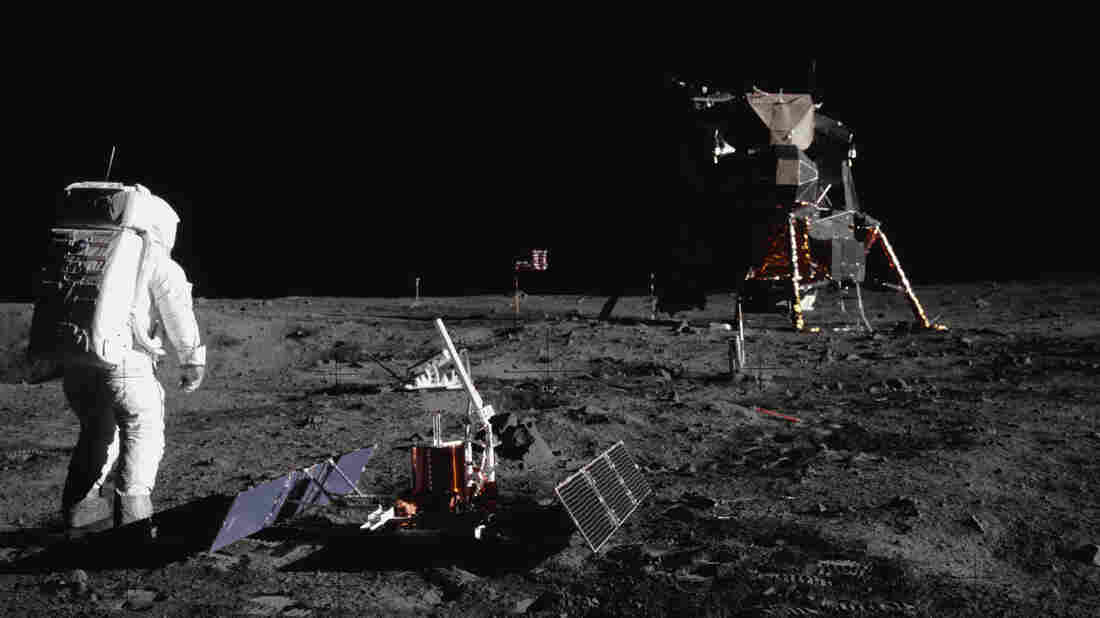 The Apollo 11 mission celebrates 50 years this month. Brian Eno's score for 1983's For All Mankind documentary — released as Apollo: Atmospheres and Soundtracks — has been reissued with brand new music. NASA/Corbis via Getty Images hide caption 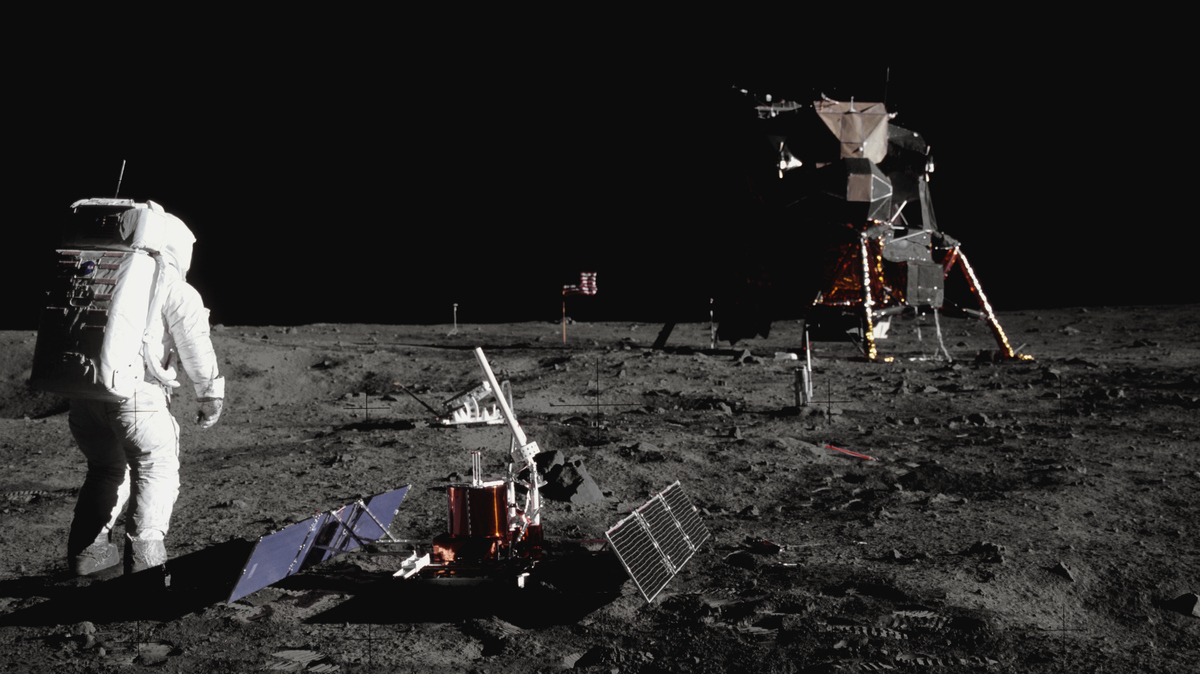 The Apollo 11 mission celebrates 50 years this month. Brian Eno's score for 1983's For All Mankind documentary — released as Apollo: Atmospheres and Soundtracks — has been reissued with brand new music.

What does Space sound like? As an astronomer, I could tell you about interplanetary gas, magnetic fields and the physics of waves propagating through them both. But that's really not the answer that matters as we cross the 50-year threshold of an epoch-making walk on the Moon. This month marks an anniversary that asks us to reflect on the profound impact the Apollo mission left on human culture. So, the question isn't what space actually sounds like from a physics perspective, but, instead, what do we think space should sound like? What is the emotional resonance for us of becoming a space-faring civilization where anyone might someday find themselves on the high frontier?

Answering that question is the work of great musicians. They are the ones who can interpret the aspirations, fears and wonder that rise when we contemplate a domain of experience entirely unknown until just a half-century ago.

When I was a space-obsessed kid in the 1970s, there were basically two soundtracks that taught me (and pretty much everyone else) what space should sound like. First there was the 1950s science-fiction film Forbidden Planet, which introduced audiences to a very early version of electronic music. The reverberating warps, chirps and whistles communicated the sheer alienness of alien landscapes. It also gave the depressing impression that future music might, literally, have no rhythm. Then came 2001: A Space Odyssey, which locked-in Richard Strauss' Also Sprach Zarathustra as the music of celestial awe.

But there's a lot of ground between overwhelming cosmic rapture and rhythmless space chirps, especially as real human beings began actually leaving the planet. This connection to experience, real or imagined, marks the true territory of Brian Eno's Apollo: Atmospheres & Soundtracks, now remastered and reissued with a set of completely new music titled For All Mankind.

Eno is one of the founders of ambient music, which relies on a mix of digital processing and real instruments to create richly layered audio environments (as opposed to traditional songs). Eno was asked to score For All Mankind, a 1983 documentary on the Apollo 11 program by its director Al Reinert. Made with his brother Roger Eno as well as Daniel Lanois, Brian Eno conceived a soundtrack of profound beauty that remains both deeply moving and surprising.

Eno creates sonic landscapes that capture a wide range of deeply felt interior resonances to our ideas about space. The music also holds a richly imagined sense of being human within the capsuled, space-suited reality of space travel. From the original soundtrack, "Under Stars" begins with the kind of electronic peel we expect from "space music," but adds a slow grounding bass line. The individual electronic notes then to descend like stars falling from a dark sky. Eno mixes wonder with strangeness and perhaps a little fear. "Matta," which follows just a little later, is just straight-up fear and the darkest piece on the album. It sounds like being surrounded by an environment for which your biology is completely unprepared — truncated hoots, like cries in an alien rainforest, are overlaid on a background of pulsing echoes. Brian Eno's For All Mankind reimagines the original 1983 documentary soundtrack with Roger Eno and Daniel Lanois. Shamil Tanna/Courtesy of the artist hide caption Brian Eno's For All Mankind reimagines the original 1983 documentary soundtrack with Roger Eno and Daniel Lanois.

Shamil Tanna/Courtesy of the artist

But Eno extends the emotional range of his electronic and digital effects beyond just strangeness and anxiety. One of the new tracks, "Like I Was a Spectator," plays like an extended meditation on the satisfaction of finding oneself in the midst of utter novelty. Its bright tones communicate a sense of repose and clarity.

Surprisingly, the sense of what space travel would mean to the traveler was most powerfully captured in the least "spacey" tracks. I didn't think an album of acoustic environments inspired by the moon landing could rely so heavily, and so effectively, on country and western music. But pieces like "Silver Morning" and "Deep Blue Day" (from the original recording), plus new works credited to Daniel Lanois ("Capsule" and "Fine-grained") get their traction from pedal and steel guitars passed over and through languid electronic processing. The connection between the vast landscapes of the American West and the bright, empty lunar horizon (set against a perfectly black sky) make perfect sense only after you hear them woven together through Eno's compositions. You can find this approach to ambient music in modern groups like SUSS (the song "Wichita" is a good place to start), which seems profoundly inspired by Eno's western-themed tracks on Apollo.

Eno explores the human dimension in the vastness of the stars, with his most complete expression found in "An Ending (Ascent)," a composition that later appeared in films as diverse as Traffic, 28 Days Later and Drive. It's a remarkable piece that can trigger despair or exaltation. The little kid in me who fell in love with the stars found the subtitle "Ascent" perfectly captured the music's power. After all, what we call "space" is also known as "the heavens." Religious or not, the stars have always called to us and served as reminders of how much more there is to the world than the small dramas of our small lives.

Even though it's been 50 years since Neil Armstrong walked on the Moon, it's important to see that only now are we at the edge of a space age for everyone else. With the advent of Space X, Blue Origin and other private space ventures, the next 50 years may well open the experience of space to many folks from tourists to teamsters. And when they reach that big rotating wheel in orbit, I wouldn't be surprised if they'll find Apollo: Atmospheres & Soundtracks playing for them in the arrival hall.