Accessibility links
What's The Deal With The Iran Deal Now? A special meeting of the International Atomic Energy Agency in Vienna this week let the U.S. and Iran spell out their starkly different views, and came amid continuing tensions. 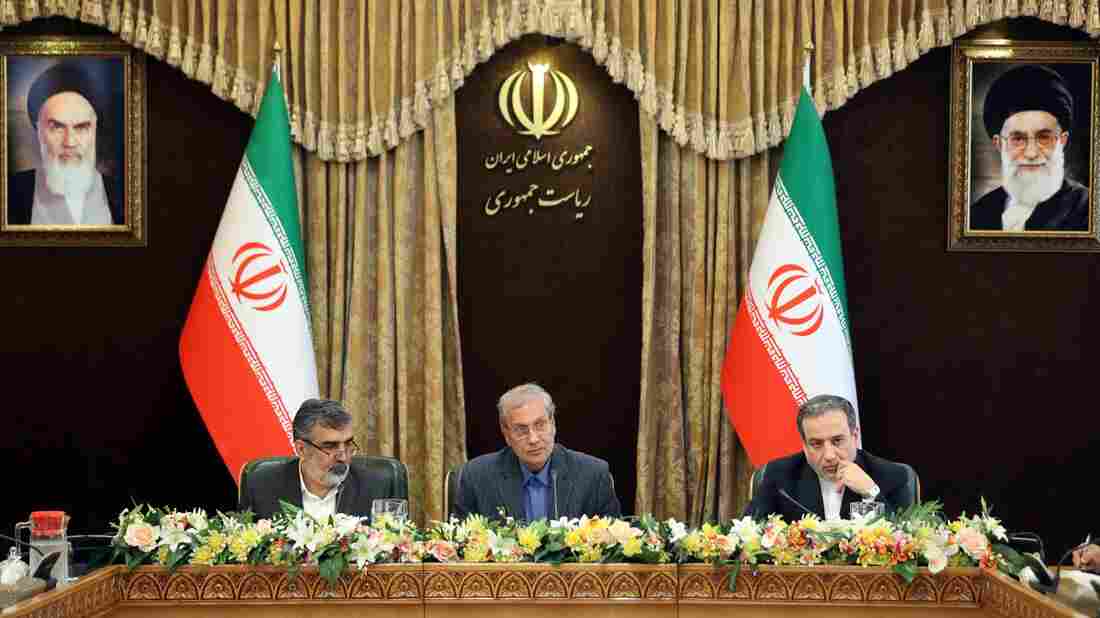 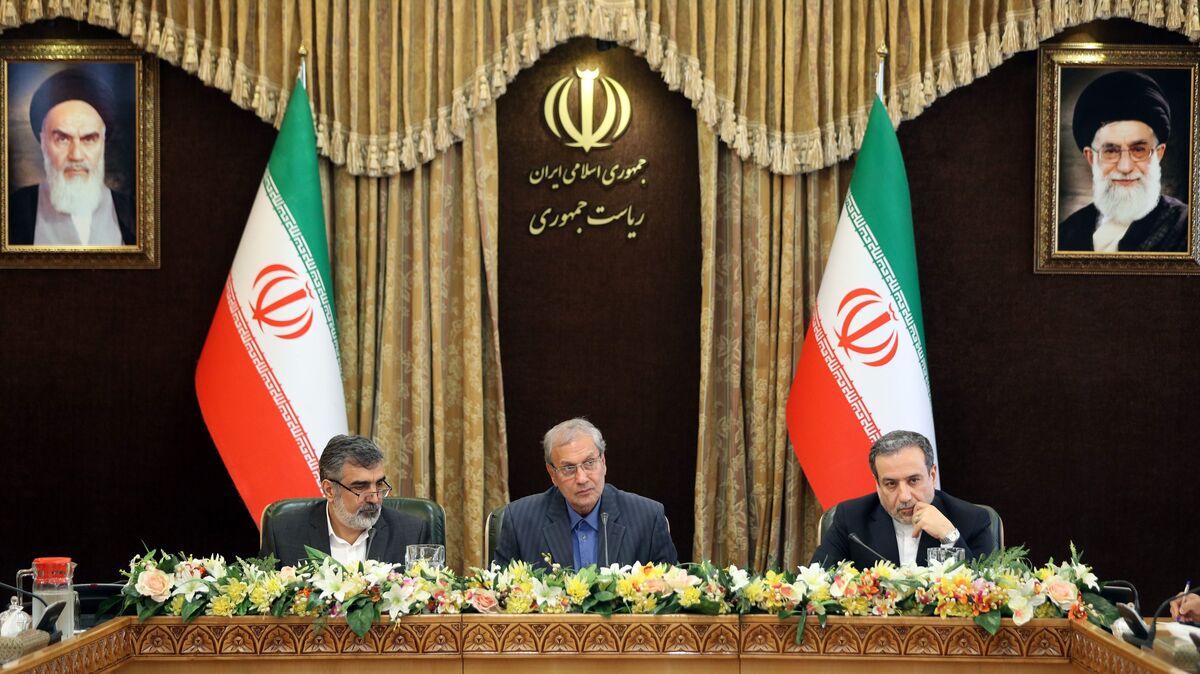 From left: Iran's Atomic Energy Organization spokesman Behrouz Kamalvandi, government spokesman Ali Rabiei and Deputy Foreign Minister Abbas Araghchi give a joint press conference at the presidential headquarters in the capital Tehran on Sunday. Iran is enriching uranium beyond a 3.67% cap set by the nuclear deal.

A special meeting of the Vienna-based International Atomic Energy Agency Board of Governors wrapped up Wednesday with no formal action on Iran's two recent violations of the 2015 nuclear agreement, known as the JCPOA. The meeting let both the U.S. and Iran spell out their starkly different views, and came amid continuing tensions: Iran has given Europe — which is attempting to get trade going with Iran — a 60-day time frame to save the nuclear deal, and President Trump threatened more sanctions even as the IAEA meeting was taking place. On the same day, Iranian boats attempted to seize a British tanker in the Persian Gulf.

After waiting some 14 months following President Trump's decision last year to pull out of the JCPOA and re-impose sanctions, Iran began suspending one of its commitments under the deal every 60 days. So far, Iran has begun keeping more low-enriched uranium than the deal permits, and it's enriching it at levels slightly higher than called for in the agreement.

"The JCPOA is not re-negotiable," he said Wednesday. "No country is ready to negotiate with a country that is putting a gun on its chest."

Abadi said the U.S. call for this week's IAEA special meeting was not well received among other delegations, adding that Washington had tried to encourage other countries to call for the meeting, but was rebuffed.

The Russian response was sharp, delivered by Ambassador Mikhail Ulyanov. 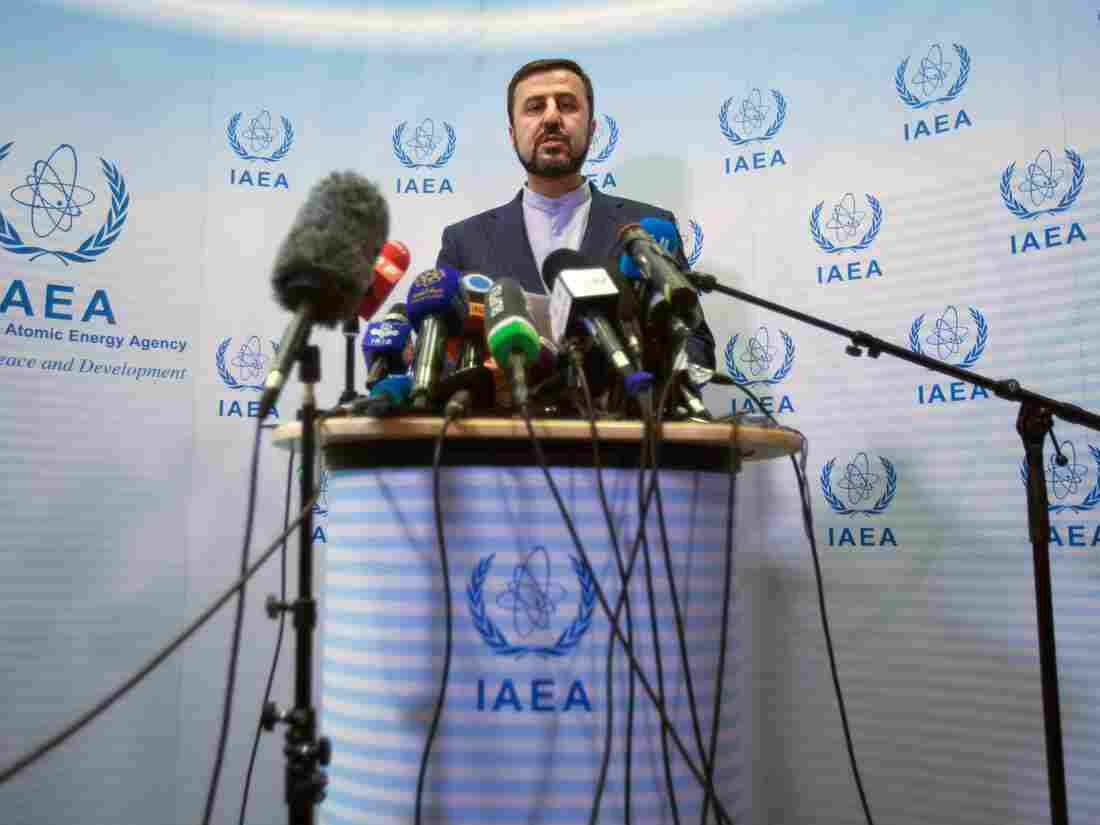 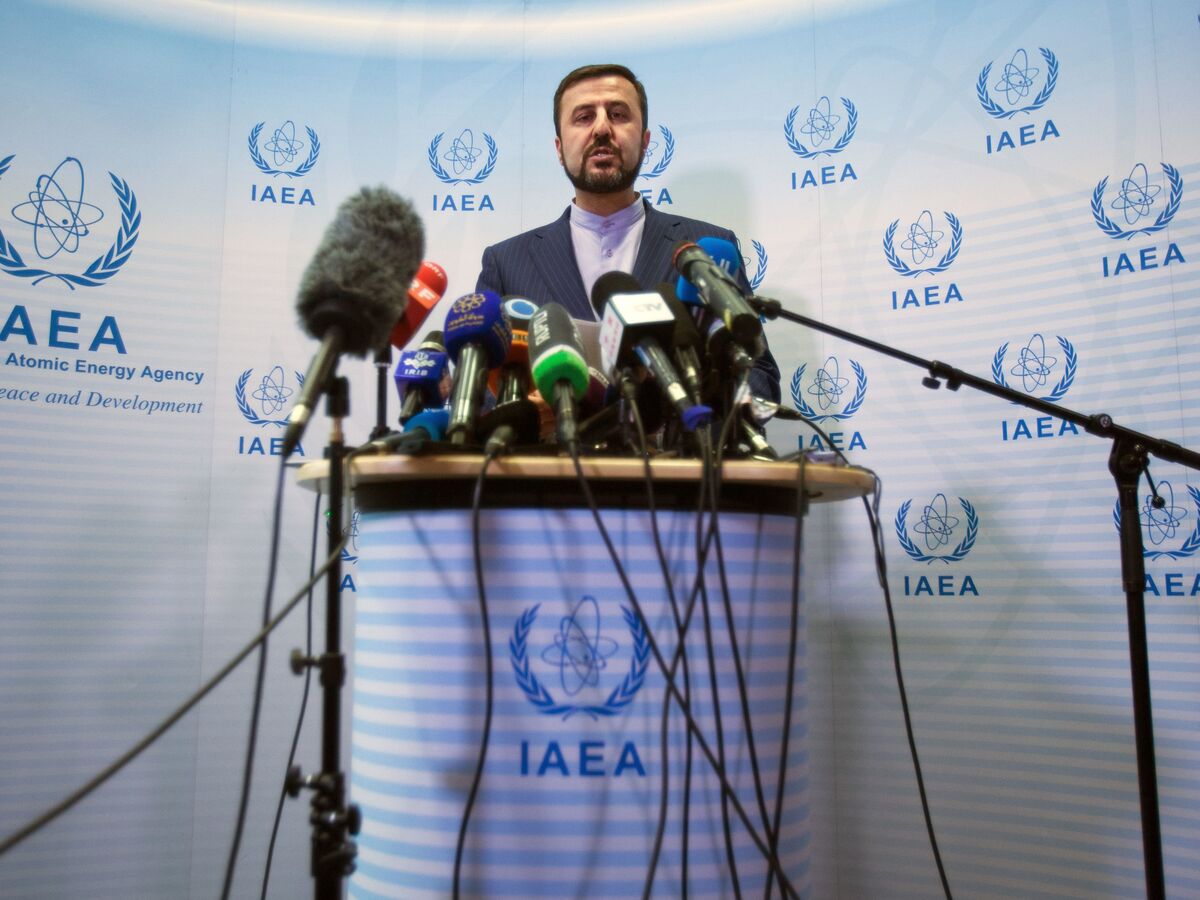 Iran's Permanent Representative to the United Nations Kazem Gharib Abadi speaks with reporters after the International Atomic Energy Agency Board of Governors meeting in Vienna on Wednesday.

"The initiative to convene this extraordinary session came from the United States — the country that has declared the JCPOA to be a 'terrible deal' and took the path of its destruction," he said. "In practice, it turns out that Washington is aware of the importance of the plan and is seeking its full implementation. Although for some reason, they only refer to Tehran."

A U.S. administration official, speaking with reporters on background, acknowledged approaching other countries about calling the meeting. In the end, he said, the U.S. decided to call the meeting itself.

The official added that there was strong support among IAEA board members for the continued role of the IAEA, which has inspectors in Iran monitoring the country's nuclear program. Officials call this a "state-of-the-art verification system," but in pulling out of the JCPOA, the Trump administration slammed it as not tough enough.

The U.S. official said the board did agree to make public two reports by Director-General Yukiya Amano, outlining some of Iran's activities that had concerned Washington. Those concerns are not likely to end soon, with Iran preparing to announce more violations in another 60 days. 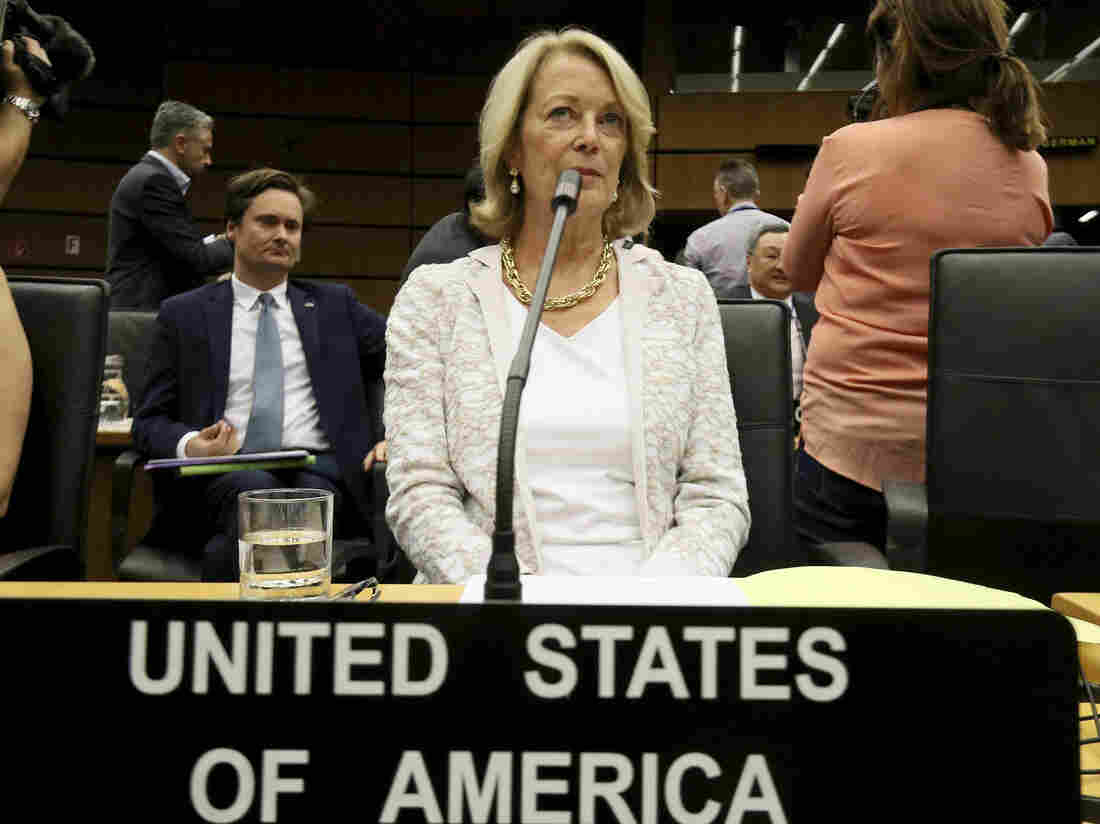 At the IAEA board of governors meeting, U.S. Ambassador Jackie Wolcott urged other members to join Washington in cutting off Iran's sources of revenue. Ronald Zak/AP hide caption 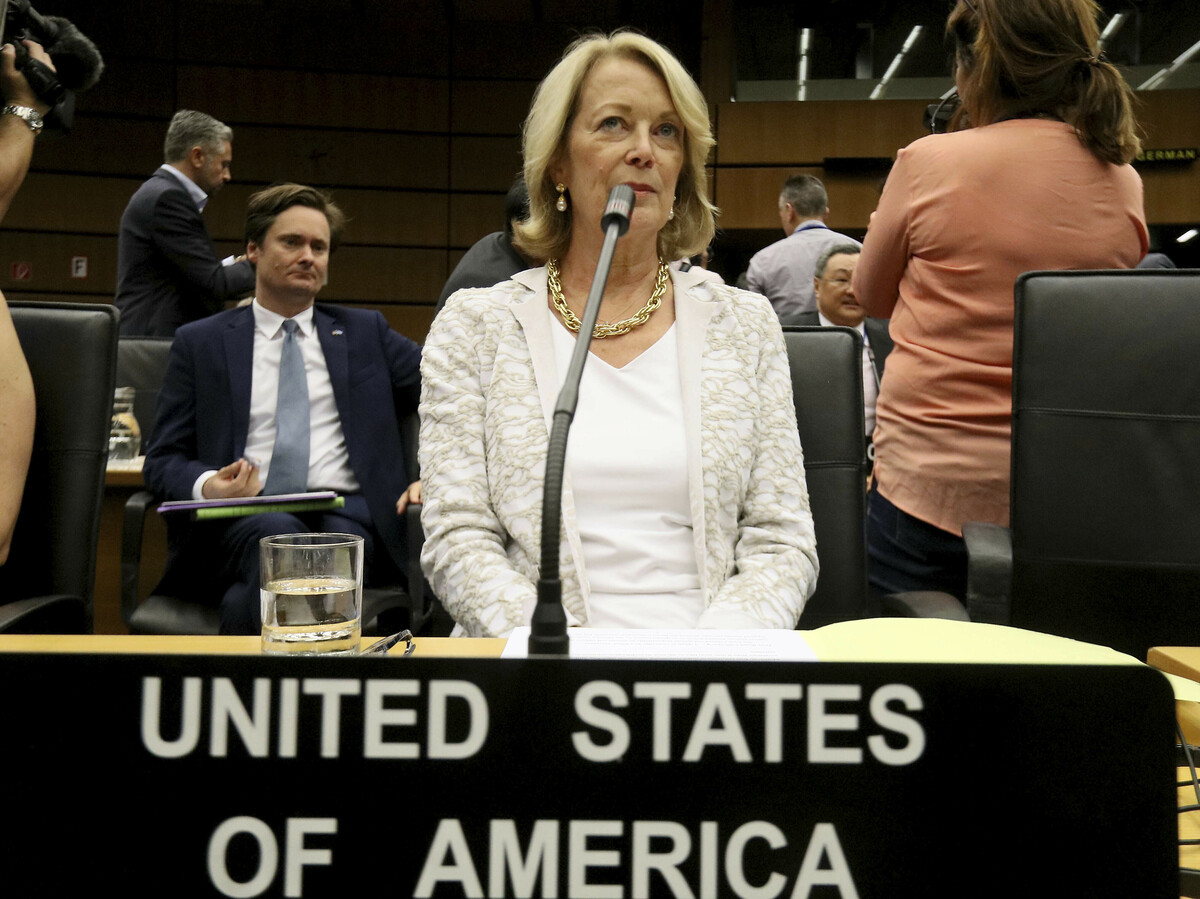 At the IAEA board of governors meeting, U.S. Ambassador Jackie Wolcott urged other members to join Washington in cutting off Iran's sources of revenue.

"As stated before by our high-ranking officials, including the president and minister of foreign affairs," Abadi said, "Iran will cease some parts of implementation of its obligations under the deal every 60 days, unless there's going to be substantial progress made toward implementation of the obligations of other remaining parties to the JCPOA, especially the European Union and the E3."

The E3 refers to the three European signatories to the JCPOA — Great Britain, France and Germany. They have come up with an alternate payment mechanism, the Instrument in Support of Trade Exchanges or INSTEX, intended to allow trade with Iran without exposing European companies to American sanctions.

To date, it's been used experimentally for food, medicine and other basic transactions, but Abadi complains it has not been used enough.

During the board of governors meeting, U.S. Ambassador to the IAEA Jackie Wolcott urged other members to join Washington in cutting off Iran's sources of revenue. Wolcott called on countries to resist what she called Iran's "brinkmanship and extortion tactics," calling the recent Iranian nuclear violations a deliberate and concerning expansion of its nuclear program.

While the meeting was going on, President Trump tweeted that "Iran has long been secretly 'enriching'" in violation of the "terrible" nuclear deal his administration reneged on. "Sanctions will soon be increased, substantially!" he warned.

The U.S. official briefing reporters in Vienna refused to comment on the president's tweet, but said it remained imperative for Iran to continue to cooperate with the IAEA and its verification regime and reporting requirements. Other officials have said additional sanctions against Iran are likely.

Argentina's IAEA Ambassador Rafael Grossi says the U.S. and Iran have worked themselves into a difficult position. Iran is voicing a rather generic demand of seeing economic benefits from staying in the deal, "which is very unlikely in the present circumstances," he says.

"So I don't see any way out of this," he says. "The current mitigation scheme [INSTEX] is really very insufficient in the eyes of Iran."

Grossi sees the reactive nature of the dispute as "very serious," saying, "You don't right a wrong with another wrong."

"I think if the Iranians go above 20% enriched uranium, it's going to start making countries very, very nervous," she says.

Rockwood's worst-case scenario involves Iran walking out of the Treaty on the Non-Proliferation of Nuclear Weapons, which includes Tehran's pledge not to acquire nuclear weapons.

"That would be a very bad signal," she says. "I fear what the consequences of that might be."

Another worst-case event would see Iran kicking out the IAEA inspectors, a possibility the Iranian ambassador mentioned in his comments to reporters.

Abadi says so far, Tehran is making a clear distinction between cooperating with the IAEA and sticking to its obligations under the JCPOA.

Iran has stopped complying with some of its commitments under the nuclear deal, he says, "but we haven't touched our cooperation with the agency. ... I hope that we will not reach that point."