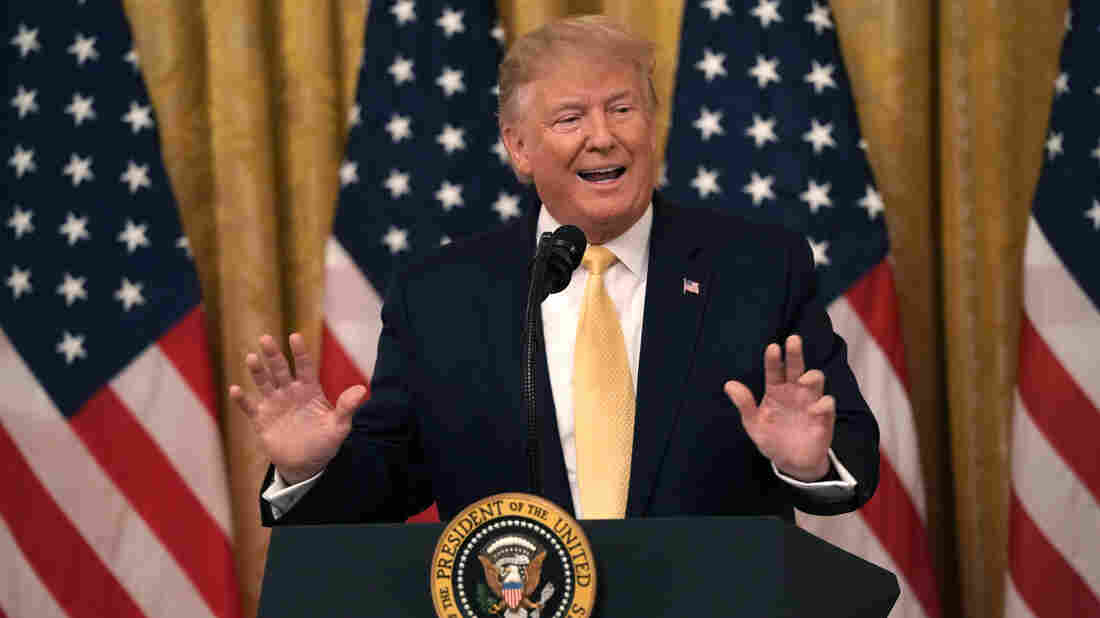 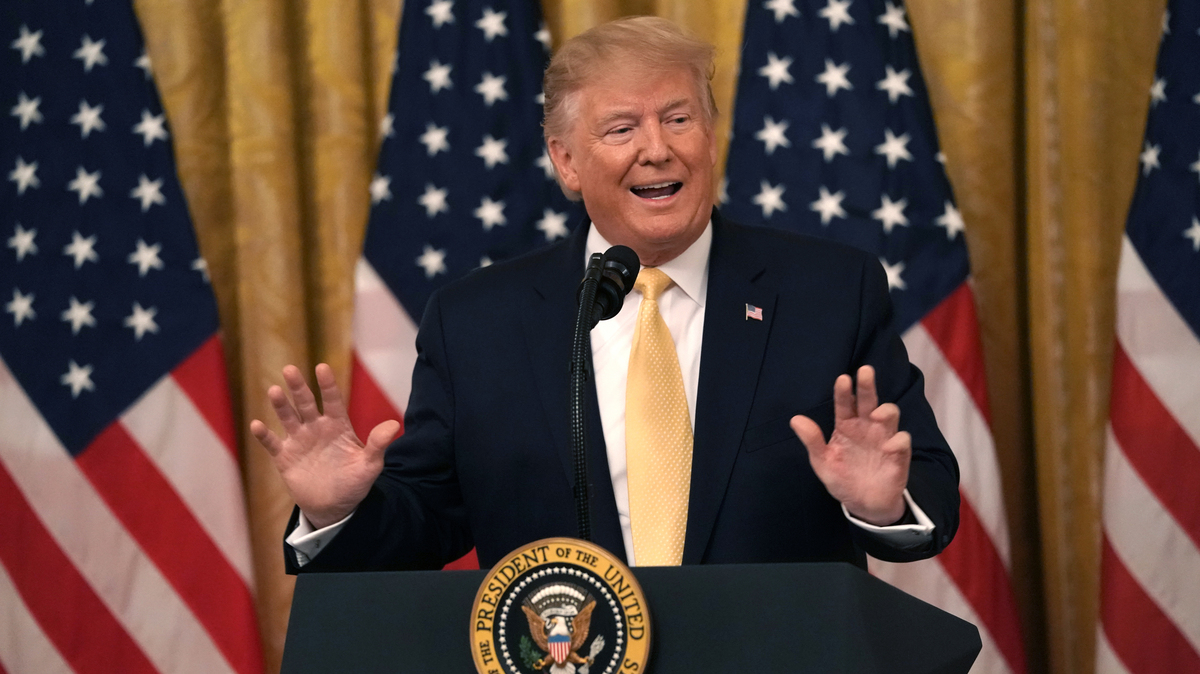 President Trump speaks during a "Presidential Social Media Summit" in the East Room of the White House on Thursday.

President Trump on Thursday announced he is directing his administration to explore all regulatory and legislation solutions to "protect the free speech of all Americans."

Trump, speaking to conservative social media personalities at a White House "summit," said big tech "must not censor the voices of the American people."

"We're not going to be silenced," he said. Trump complained that people have been unable to follow him on some social media platforms. "People come up to me and say 'Sir, I can't follow you.' "

Facebook and Twitter were not included in Thursday's event. Trump announced that he will be calling a meeting of the major social media companies in the coming weeks.

The president praised the participants in Thursday's East Room event. "Some of you are extraordinary. The crap you think of is incredible."

The president gave them a unique definition of the Constitution's First Amendment free speech protections. "To me free speech is not when you see something good and then you purposefully write bad. To me that's very dangerous speech and you become angry at it. But that's not free speech."

This comes at a time when the president, an enthusiastic user of social media — especially Twitter, which he often deploys to rally his base — has been criticizing the social media platforms, accusing them of silencing those who support him.

One guest, a Twitter user who goes by CarpeDonktum, said that when he got the email invitation to the White House, he thought it might be spam.

He requested that we withhold his real name. He says he fears retaliation against his family.

The stay-at-home dad in Kansas is a celebrity in the conservative social media world — with more than 100,000 followers on Twitter. (His moniker is a play on the Latin phrase carpe diem — meaning seize the day. CarpeDonktum, seize the donkey, refers to Democrats.)

He's a prolific creator of pro-Trump images and videos mocking the left, which he tweets out. Several of his spoofs have been retweeted by the president.

The White House had kept quiet about the guest list. But it seemed to consist of the Trump Twitterverse, conservative social media personalities who orbit around Trump's Twitter star.

And yet, Trump has attacked those same social media platforms that have been so key to his success.

"You look at Google, Facebook, Twitter and other social media giants, and I've made it clear that we as a country cannot tolerate political censorship, blacklisting and rigged search results," the president said last year.

In May, Facebook banned several high-profile social media personalities who they say violated their policies against hate speech that engages in violence, including right-wing conspiracy theorist Alex Jones; extremists Milo Yiannopoulos, Laura Loomer and Joseph Watson, who works for Jones' Infowars; and white supremacist Paul Nehlen, who unsuccessfully ran for Congress in 2016 and 2018. The platform also banned Infowars, as well as Nation of Islam leader Louis Farrakhan.

Google, Facebook and Twitter all deny that they censor conservatives on their platforms, but a lot of conservatives don't believe that.

Conservative talk show host Bill Mitchell is one of them. He blames Twitter's algorithm for some of his followers not being able to see his tweets. He'll be attending Thursday's social media summit, and he hopes they talk about how social media has become the modern public square and the responsibilities that come with that.

"If you become the public square, you really need to offer First Amendment protections to people," Mitchell said to NPR. "Where everybody can have free and open speech. Let's have the debate. And may the best man win."

Angelo Carusone, president of the media watchdog group Media Matters, believes in free speech, but he says some of the guests at the summit alarm him. "There's a couple of establishment players there, but for the most part they're far-right extremists and a lot of people with ties to white nationalism."

But Media Matters points to other guests such as Charlie Kirk from Turning Point USA, an organization that has been accused of racist viewpoints.

Carusone says the social media summit is a calculated political move on behalf of the Trump administration. He says it's validating extreme right points of view. "The normalization of this is the part that concerns me."

As the president rallies his base ahead of the 2020 elections, Carusone wonders about the effect of elevating these voices on the right.