Accessibility links
Pelosi Feud With Progressives Erupts In Public As Party Works To Unify House Speaker Pelosi, D-Calif., is asking members to avoid attacking one another after an aide to Rep. Alexandria Ocasio-Cortez, D-N.Y, tweeted a message comparing some moderates to segregationists. 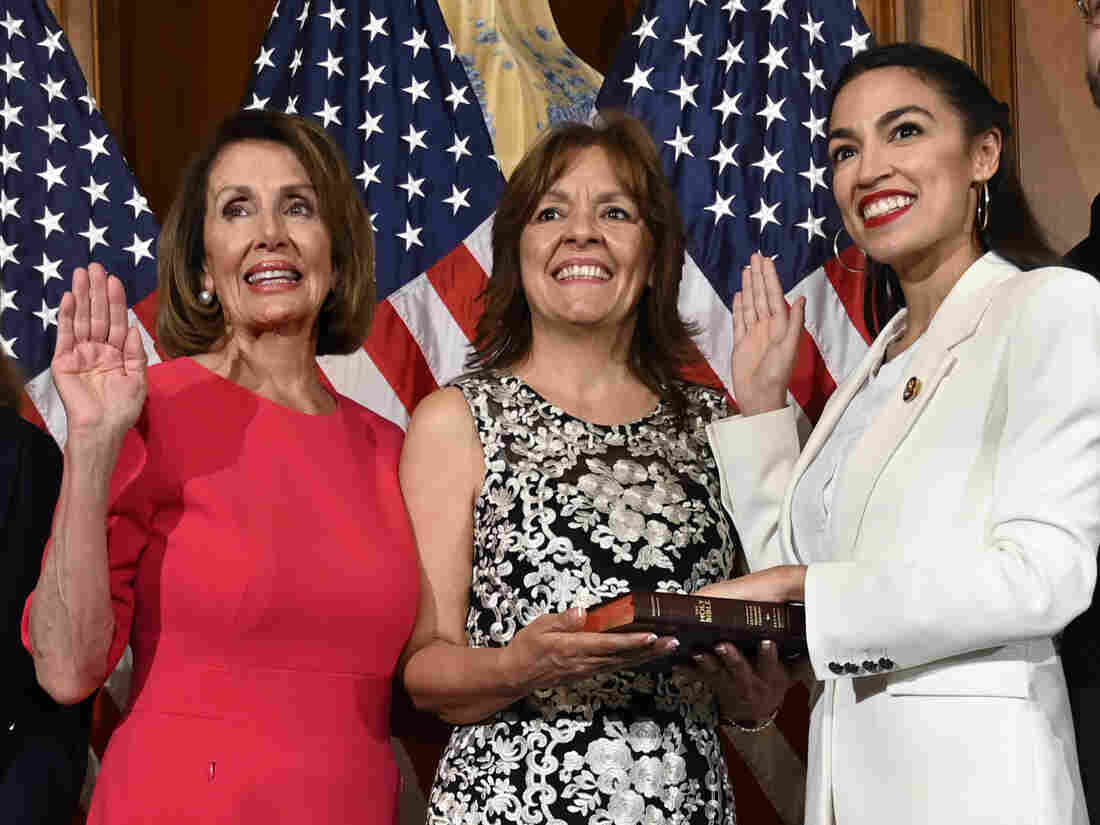 House Speaker Nancy Pelosi of California (left) is trying to move on from a public clash with Rep. Alexandria Ocasio-Cortez, D-N.Y., (right) and other progressives. Susan Walsh/AP hide caption 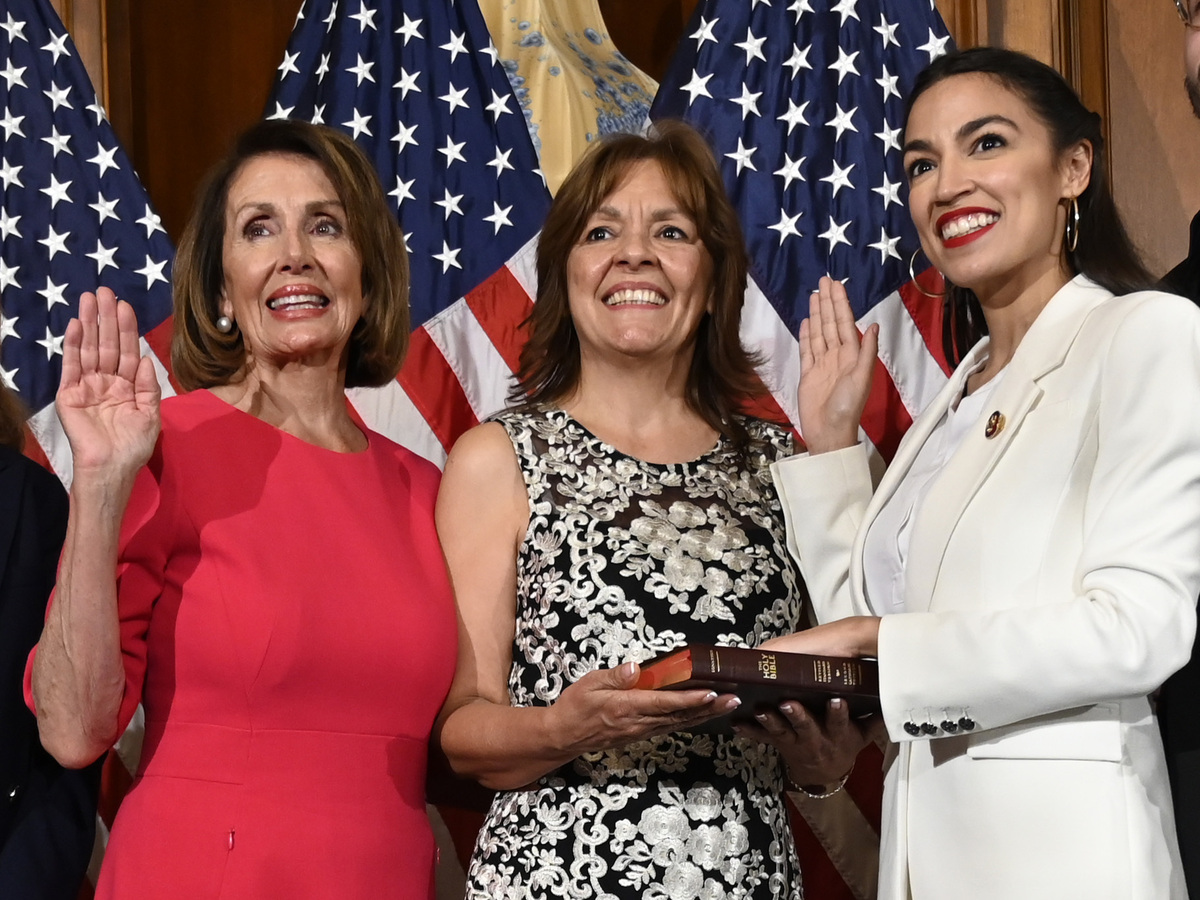 House Speaker Nancy Pelosi of California (left) is trying to move on from a public clash with Rep. Alexandria Ocasio-Cortez, D-N.Y., (right) and other progressives.

House Speaker Nancy Pelosi, D-Calif., is trying to tamp down an ongoing squabble between a quartet of progressive members and a large bloc of moderate Democrats. The effort comes after a leading progressive said the speaker was being "disrespectful" of the group, dubbed "the squad," and cited race as a factor.

Tensions inside the caucus have simmered for some time, but the internal party fight spilled out into the open during debate over a border spending bill that passed the House last month. Pelosi allowed a vote on a Senate-passed version of the bill, without a series of amendments negotiated by progressives to protect migrants, at the behest of more moderate members.

Pelosi tried to downplay the conflict Thursday and urged her members to stay out of the fray.

"We respect the value of every member of our caucus," Pelosi told reporters. "The diversity of it all is a wonderful thing. Diversity is our strength. Unity is our power."

But a day earlier, one of the four — Rep. Alexandria Ocasio-Cortez, D-N.Y. — made it personal, suggesting in an interview with the Washington Post that Pelosi was deliberately targeting the four because of their race.

"When these comments first started, I kind of thought that she was keeping the progressive flank at more of an arm's distance in order to protect more moderate members, which I understood," Ocasio-Cortez told the Post. "But the persistent singling out ... it got to a point where it was just outright disrespectful ... the explicit singling out of newly elected women of color."

Ocasio-Cortez said Thursday that she didn't have anything to add regarding the controversy and that it is "kind of over," but many members and staff remain frustrated, saying the freshman's comments about race have angered many Democrats who say they went too far.

Pelosi's efforts to head off further public criticism come after the fight over the border spending bill spilled into a spat on social media. Rep. Mark Pocan, D-Wis., a co-chair of the Congressional Progressive Caucus, pointedly attacked a bipartisan negotiating group known as the Problem Solvers Caucus for pushing for a vote on the Senate aid bill.

The fight escalated when the chief of staff to Ocasio-Cortez compared moderates to segregationists in a tweet that has since been deleted. The tweet suggested that two moderate groups, the Blue Dogs and the New Democrats, be called New Southern Democrats, a group of Democrats who once supported segregation. He added, "They certainly seem hell bent to do to black and brown people today what the old Southern Democrats did [in] the 40s."

The staffer continued to argue on Twitter that the moderate wing may not be racist but was still backing policies that could harm communities of color.

Those comments enraged moderates and members of the Congressional Black Caucus. Rep. Terri Sewell, D-Ala., the vice chair of the moderate New Democrat Coalition and a member of the CBC, released a statement condemning the remarks.

"To even insinuate that I, or any other member of the New Dems, would promote policies that are racist and hateful or ones that would negatively impact communities of color is deeply offensive and couldn't be further from the truth," Sewell said.

The controversy was so widespread that Pelosi addressed the issue directly Wednesday in a weekly closed-door meeting for all House Democrats.

She called on members to have "some level of respect and sensitivity" to the "individual experience" that each member brings to Congress, according to a transcript of her remarks provided by a source in the room.

Members and staff have privately questioned whether the staffer should be fired, a topic Ocasio-Cortez said has not been raised with her directly.

"No one has texted me," Ocasio-Cortez said after a lengthy vote series on the House floor. "I've been on the floor for what, an hour voting, and nobody came up to me, nobody talked to me personally."

Asked if she thought the situation has been handled appropriately, Ocasio-Cortez said, "Of course not. Of course it's overblown."

Pelosi went on to tell members to channel their frustrations into fighting back against Senate Republicans, not one another. She also reminded progressives that Democrats need to stay unified if they want to keep their current House majority.

Pelosi worked to move on from the scuffle Thursday, dismissing the criticism and telling reporters that she has said all she is going to say on the topic.

"How they are interpreting and carrying it to another place is up to them, but I'm not going to be discussing it any further," Pelosi said.

"What I said in the caucus yesterday got an overwhelming response from my members, because they know what the facts are and what we are responding to."

Sewell later told reporters that internal battles like this distract Democrats from their legislative agenda.

"I think we should realize who our real opponents are here," Sewell said. "It is important that we resolve any kind of conflicts internally and not publicly."