Accessibility links
As America Celebrates Apollo, A New Moon Race Is Underway More nations than ever are racing to the moon. Their lunar ambitions are driven by advances in technology and a desire to prove themselves.

As America Celebrates Apollo, A New Moon Race Is Underway

As America Celebrates Apollo, A New Moon Race Is Underway 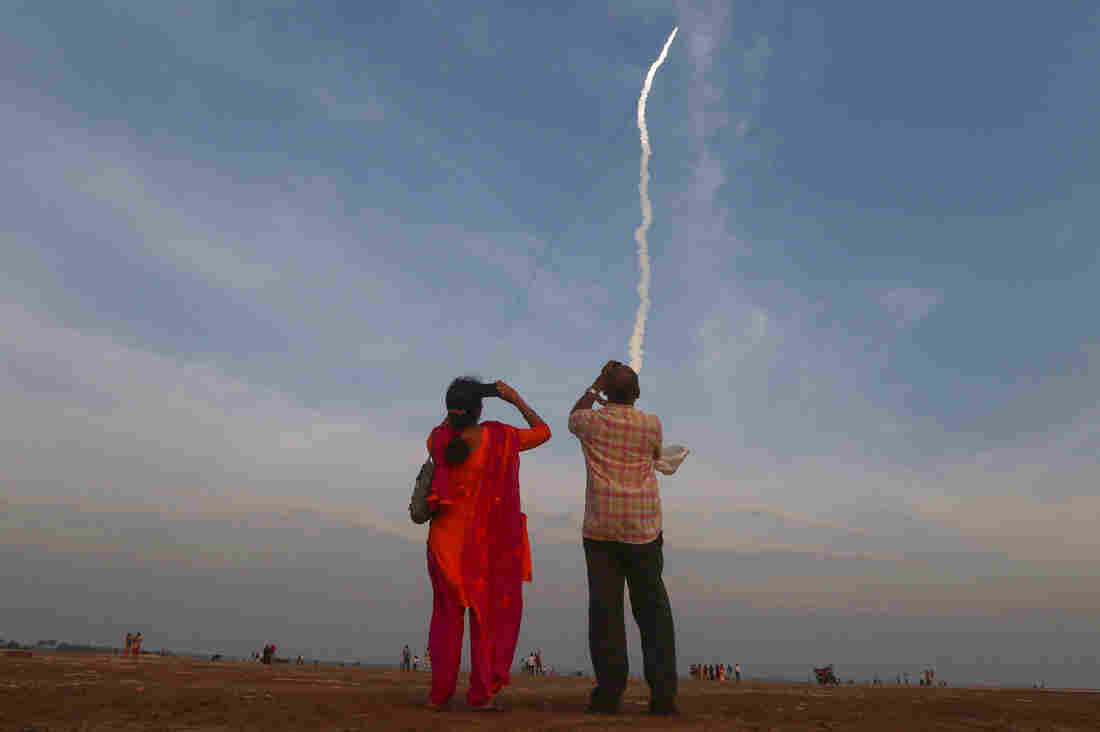 On Dec. 14, 1972, a capsule carrying Apollo 17 astronauts Eugene Cernan and Harrison Schmitt lifted off from the lunar surface.

It was the day that humans left the moon.

For a long while, they didn't come back, but that's changing. China, India and even smaller nations like Israel and South Korea are all pursuing robotic moon missions. Their lunar ambitions are being driven both by a desire to flex their technological muscles and by the rise of global nationalism.

"Every country is going to be saying, 'Look at the things we can do in space,' " says Emily Lakdawalla, with the Planetary Society, which promotes space exploration.

The Apollo missions were the capstone of a decade spent racing to the moon. The U.S. had expended enormous sums to beat the Soviet Union, whose crewed lunar program never made it off the ground. But once the Americans had won, both sides lost interest.

"There was a dry patch," Lakdawalla says. America focused on missions into deeper space, including the Viking landers on Mars and the Voyager probes to the outer solar system. The Soviet Union, meanwhile, wrapped up its Luna series of robotic moon missions and then plotted a course to Venus. Human spaceflight stayed closer to home, with the U.S. pursuing its space shuttle program and the Russians building a series of Earth-orbiting space stations.

Back to the moon

By the early 2000s, however, the moon was getting a new flock of visitors. In 2003, the European Space Agency launched a small spacecraft known as SMART-1. It was followed by missions from Japan, China and India. NASA launched missions as well, including the Lunar Reconnaissance Orbiter, which mapped the moon in high detail.

And then, in 2013, the China National Space Administration launched Chang'e-3. It was the first probe to actually land on the moon in nearly 40 years.

Right from the start, the Chinese have sought to explore space differently than the U.S. did during Apollo, according to Joan Johnson-Freese, a professor of national security affairs at the Naval War College who has studied China's space program.

"They saw that we had an attitude of landing on the moon and sadly looking around and saying, 'Been there, done that, got the belt buckle,' " Johnson-Freese says. "So they decided that they were going to develop their lunar program in a very different way."

The Chinese have a step-by-step approach. Each step is ambitious, but not too expensive, and not too hard.

"The funding and manpower investment of China's space exploration has been rational, restrained and scientific," said Wu Weiren, the chief designer of China's lunar exploration program, earlier this year on state television. The occasion was the landing of China's latest probe: Chang'e-4. It touched down on the far side of the moon on Jan. 3, the first time any nation has landed there.

Bob Wimmer, a scientist at the University of Kiel in Germany, built a radiation detector for Chang'e-4. He says the speed at which the Chinese work is astonishing.

"European missions are extremely slow, Americans are twice as fast, and the Chinese are another two to five times as fast as the Americans," he says. "It's just incredibly intense."

From the moment he got funding to the moment his experiment launched was just over a year, which is nothing for a space mission. Wimmer describes it as "absolutely crazy," but he adds that he would work with the Chinese again.

It remains to be seen whether Chinese astronauts will follow in the footsteps of Apollo. Wimmer believes the radiation detector he has installed on Chang'e-4 can serve only one purpose: "to prepare landing a human on the moon, so that they know what the radiation environment is."

Johnson-Freese says that the Chinese space program has yet to commit to sending a human crew to the moon. Officially, she says, the space missions are organized along two tracks — one that sends humans on missions to low Earth orbit, while the other sends robots to probe the moon.

She also believes that the two sides of the Chinese program could come together in the future. "Their persistence leads me to believe that the next voice transmission that we get from the moon could well be in Mandarin," Johnson-Freese says.

India goes for a landing

China isn't the only country eyeing the moon. Early next week, India is planning to launch Chandrayaan-2, its second mission to the moon and the first to attempt a soft landing. That would come just over a decade after its first mission, an orbiter known as Chandrayaan-1, in 2008. 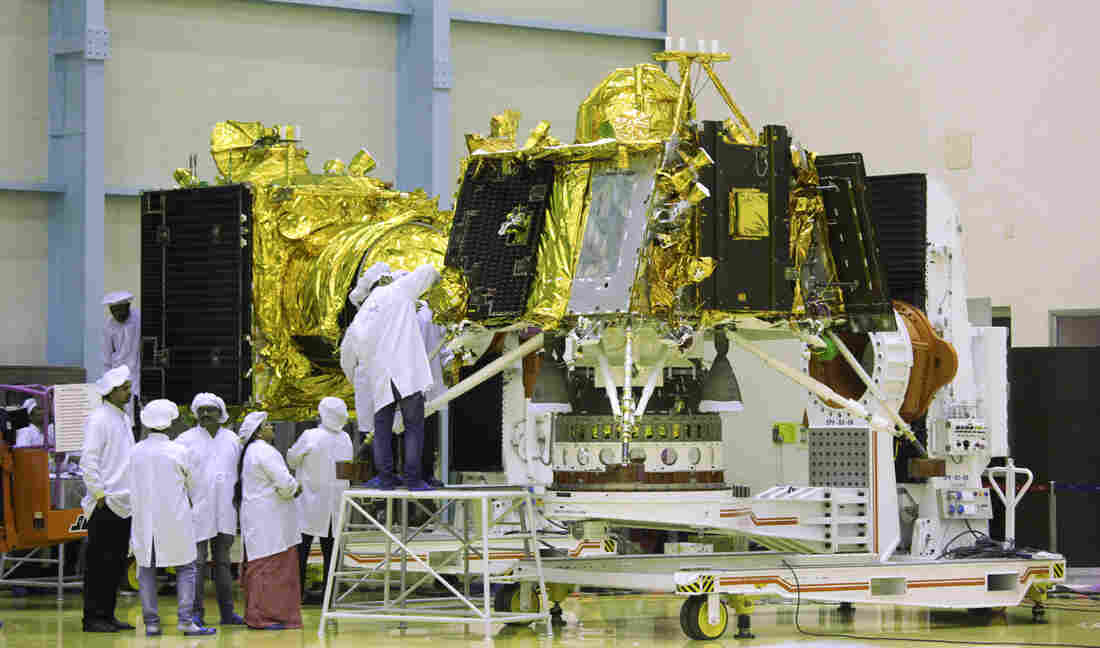 Chandrayaan-2 lander Vikram in the foreground and the mission's orbiter in the background at the Indian Space Research Organisation in Bengaluru. The mission, due to launch this month, will be the first time India is attempting a soft landing on the moon. Pallava Bagla/Getty Images hide caption

Chandrayaan-1 helped turbocharge India's space program, according to Sriram Bhiravarasu, a researcher at the Lunar and Planetary Institute in Houston. "The enthusiasm was superhigh. It just ignited a spark in the Indian researchers," he says. "I started my Ph.D. right after Chandrayaan-1 was launched."

As India's research community gets going, he says, the nation wants to go to other destinations, too.

"India is planning missions for Venus exploration and also for Mars in coming years," he says.

Johnson-Freese says that just like during the Cold War, a lot of this new enthusiasm for space is very much grounded in earthly politics. India and China are competing for geopolitical points in Asia. They hope their space programs will make them look strong.

The Planetary Society's Lakdawalla welcomes the competition if it means more lunar science will get done. It has been decades since anyone has visited the lunar surface. And there is still a lot for humans everywhere to discover, she says. "It's definitely time for scientists to get back to the moon."