Accessibility links
Betty Who Creates 'A Space That People Feel Joy In' With 'Betty' Album Australian pop singer Betty Who reflects on her latest album, Betty, and the paths she's been able to explore as an independent artist. 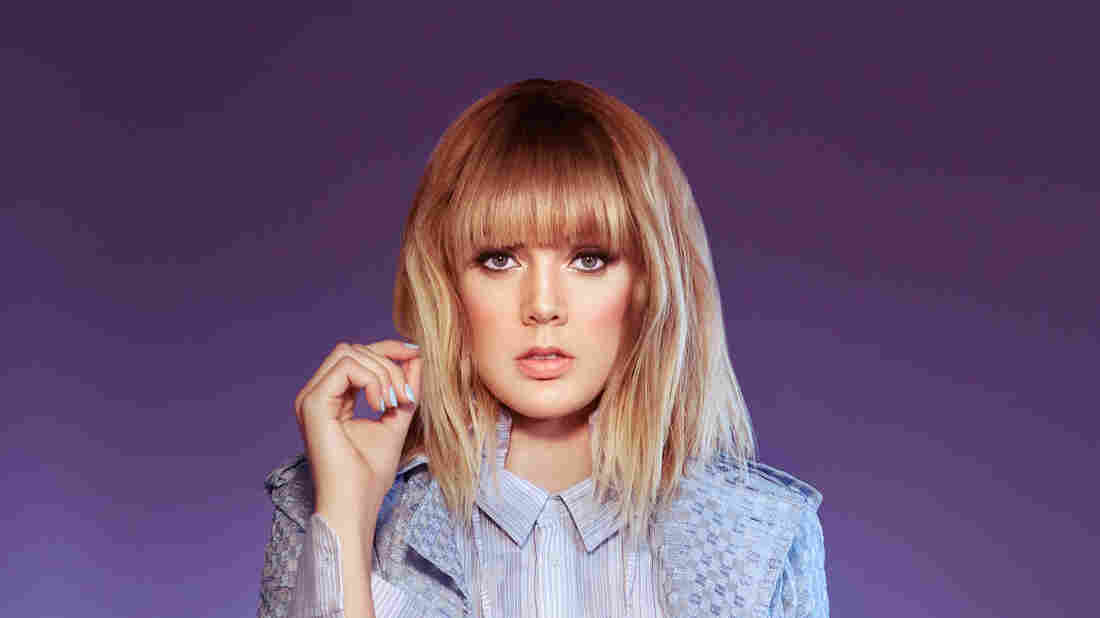 Betty Who's latest album, Betty, is out now. Ben Cope/Courtesy of the artist hide caption

Betty Who's latest album, Betty, is out now.

Ben Cope/Courtesy of the artist

In 2013, a video of a marriage proposal set to Betty Who's "Somebody Loves You" went viral on YouTube. The video shows a colorfully clad group perform a coordinated, joyful dance to the pop song in the middle of a Home Depot in Salt Lake City. According to Betty Who, the Home Depot performance is one of a number of proposals and wedding dances with the same soundtrack.

"People love to dance and cry at the same time," the Australian singer reflects on "Somebody Loves You," which was her breakout single. She says she actually wrote the song "ironically enough" as a break-up track — but the way that it's been taken up as a celebratory anthem is fitting, too. At the end of the day, whether the crying-and-dancing comes from the ecstasy of a proposal or the sadness of a break-up, Betty Who hopes to create fun for all through her music.

Now, the 27-year-old artist has released her third studio album, Betty. A lot has changed for Betty Who since that viral break-out moment — namely the artist's label ties. She produced this album independently, making it her first without the backing of a major label. But the musician still strives to give her fans opportunities for joy.

Betty Who spoke with NPR's Ari Shapiro about having and sharing fun onstage, the benefits of working independently, and how she models uncompromising self-confidence. Read on for interview highlights, including some that weren't aired.

On fostering joy through music

I want to be 80 and look back on the music I've made my whole life and know that I did everything that I could to make people really happy. That's what I really wanna do. You know, if you have a purpose on this planet, my purpose is — I wanna provide a space that people feel joy in, people feel safe enough, also, to cry in, and to be themselves in. But the number one compliment anybody could give me is they're having a bad day, and they listen to my song and it makes them feel better.

I think [that occurred to me], actually, after I'd been doing it by accident for a couple years. 'Cause I wrote "Somebody Loves You"; I put an EP out that was really poppy and really fun. And I'm smiley and happy and warm and that's also my personality, and I think that came out in the music.

On hearing artistic independence on Betty

I hear it in "The One." "The One," for me, is a song that I was always wanting to make. It is very Britney- and 'N Sync-esque. You know, Britney Spears Live on HBO at Las Vegas is, like, one of my favorite shows of all time. I watch it on DVD all the time. I collect tour DVDs. The Beyoncé "I Am..." Live Tour is one of my favorites. When Homecoming came out, I was just, like, drooling. I love watching other, particularly female, awesome performers perform.

I wanted to feel like Britney Spears every night, and so I wrote this song. And I think if I had been signed to a label, this song may have either not come out or it would have been totally misunderstood for something else than me being like, "I'm a 27-year-old who is literally living 10-year-old me's actual dream." Like, if 10-year-old me had a dream, it's this. It was to be Britney Spears. And I'm an adult now, and I'm an independent artist, and nobody can tell me what to do. So I'm gonna make a song that I get to, every night, feel like I'm in 'N Sync.

Music is supposed to be fun, and I spent so many years not having fun doing it because so many people put too much pressure on it. And I really am just trying to make, first off, myself happy.

To me, it's so indicative of the fact that now, I get to just make choices. Because it's supposed to be fun. Music is supposed to be fun, and I spent so many years not having fun doing it because so many people put too much pressure on it. And I really am just trying to make, first off, myself happy. But also other people. I just want it to be fun and easy. And I work harder than anybody I know — and I'm cool with that. So if that's gonna be my life forever, when it's good, it should be really good. And I think that's what I hear on the record. When it's good, I'm having so much fun.

On "tall queens" and contagious confidence

I think there's a lot to be said about, honestly, not caring as much. I forget that I'm huge. I'm a very dominating, large person. I'm 6'2". And I'm proportional to that — I'm not, like, some 6'2" girl who also weighs 90 pounds soaking wet. I am strong, I'm thick, I'm built. As my future mother-in-law likes to say, "Good German stock."

When I see other women watch me or come to me — especially a lot of tall girls who've been coming out of the woodwork, and come to the show — I'm like, "I love my tall queens." Because we don't have representation, really, in the same way. I mean, Taylor Swift is 5'10", but also, she's tiny. I start to see these women who come out, and they watch me, and I see them — I see it, I've seen it happen before — they watch me dance, and I see them in their body, trying to find the place of looseness and just kind of letting stuff go, so that they can enjoy themselves. It's not about looking good. It's about having fun. Sometimes I look crazy when I dance; sometimes I look awesome when I dance. Either way, I'm still having the same amount of fun.